Where Have You Cried in Public? 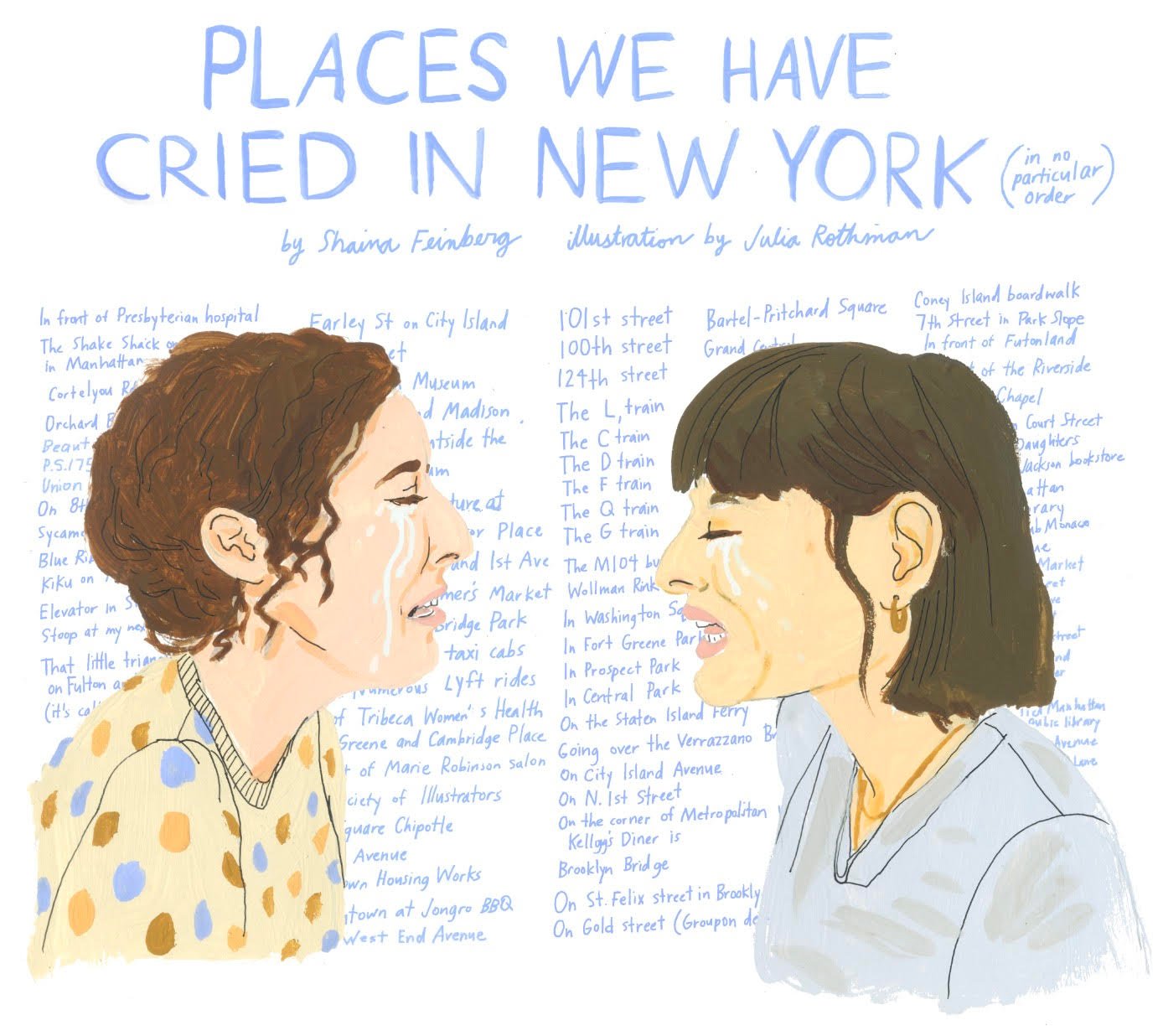 Having grown up in New York City, I have had the great pleasure of crying publicly all over this town…

From the Bronx to Battery Park!

I’ve cried publicly for silly reasons — like the time I bought a Groupon to get my teeth whitened but for whatever reason only my gums got bleached. I looked freakish and felt like a fool. I cried on the corner of Gold street and then again on the C train platform.

Or another time when literally a flock of pigeons shat on my new L.L. Bean backpack as I turned the corner from 100th street to West End Avenue. I was in sixth grade. When I got home, my mom made me stay in the hallway and strip down to my underwear. That backpack was never the same again.

I’ve also cried for more serious reasons. Like a time when my best friend’s five-year-old told me about the soft lockdowns at her school. She casually described hiding in a cubby with the other kids in her classroom. It was heartbreaking. So, I cried at the Crispus Attucks playground on the corner of Fulton and Classon.

I recently compared public crying notes with my friend Julia Rothman, who also grew up in New York City. And guess what? We’ve shed tears on some of the same street corners.

What’s the takeaway? Cry in public! Have your feelings! Don’t go to a Groupon dentist to get your teeth whitened!

Shaina Feinberg is a director and actress and Julia Rothman is an illustrator and author. Right now, they’re working on a modern guide to real sex written by everybody, for everybody. (If you’d like to contribute a story, go here.)

P.S. Making out in public, and a trick to stop yourself from crying.

You’d think it would be the other way round but in Istanbul, in this Mediterranean lovely lively city, the standard is that nobody cares when you cry in the public. This occasionally changes if you’re at a supermarket, or indoors somehow. Usually people who supervise that place offer help, thankfully. I loved the comments where random people giving bouqets of flowers or offering medicine etc.
I could cry anywhere and did almost anywhere in this city. Once after my therapist appointment, I cried in the traffic in a taxi for 45 minutes incessantly. The driver never asked anything to my surprise, but he was not weird at all, he just took it as it is. Sometimes the life gets so hard in big city, you just find yourself sobbing here and there…

I live in Israel. I’ve cried at Hebrew U (the 2 main campuses), on buses and the light rail, at the square outside city hall, at one of my favorite pubs in Jerusalem (recently, on and off for 3 hours). Grades mostly, but also being late, homesickness, and one harsh conversation.
In Tel Aviv I’ve cried at Rabin square, at Habima square, Through the whole length of Rothschild boulevard, on the bus, at central bus station, at the beach, at the port, at park Hayarkon, on Allenby street, on mt. Zion boulevard… Pain, break ups, missing people, fights, when my cat died, when we moved house, what not.

I no longer live in New York but I did for about 8 years in my twenties and I have cried all over that damn city. It’s one of those things that is hard to explain to someone that has never experienced it before, but crying in public (especially in NYC) is one of the best and most liberating feelings that one can experience. One of the times that I can more vividly remember is when I was interviewing for a new position within my current company. I wasn’t really happy there and hadn’t been for some time. A new role came available and I begged for the opportunity to interview for it. I had set all of my hopes and expectations on this new role, thinking it would fix everything that I didn’t like about where I was professionally. It was just a few weeks before Christmas when I was told at the end of the day that someone else had been hired for the new role. I quietly gathered my things and walked out of my office onto a bustling 56th street. I started crying immediately but it didn’t feel right; everyone seemed so cheerful and hopeful, doing Christmas shopping and basking in the glory of New York City during the holidays. As I turned the corner onto 6th avenue I ducked into the Hilton Hotel right there — it was full of tourists and no one I would ever see again. I knew no one from my work (or literally anyone I knew in the city) would dare enter a Hilton in Midtown for happy hour drinks. I sat in a very dark corner of their lobby bar, ordered a beer, and cried by myself for almost an hour. I was pitiful. But it helped so much! After I had no more tears to cry, I paid for my drink and walked out into the glorious New York night. About two months later I was offered a job at a different company that turned out to be so much more in line with what I wanted for myself and my career. I often think back to that night and think about the Hilton lobby bar on 6th ave with such fondness. I needed a place to wallow and the bar tender there was so kind to just leave me be. Everything worked out so much better in the end (as it usually does).

I love this so much

I’m a crier. And I don’t mind crying in public, although it often feels like time slow down when it happens. I was in Paris over Thanksgiving and had horrendous stomach cramps and the museum I wanted to see was closed. It was snowing and I called my mom and sobbed on the street. I remember it was beautiful that day even though it seemed like everything was awful.
Last week my best friend passed away. I got the news in the middle of my open plan office and sobbed in a conference room with people walking by. A coworker took me home and I cried in the uber, in the lobby of my building, and as I walked my dog. I took a couple of days off and sobbed at the pool, at the dog park, at starbucks, and in the airport. I always feel better after.

So sorry for your loss, Michelle. Thinking of you today.

I’m so sorry for your loss

I’ve cried in public more times than I can count. When I have anxiety attacks I almost always cry and at my last job I was having anxiety attacks nearly every day. I ended up crying in front of coworkers, my boss, my patients…. I do not care where, I will cry anywhere (lol).

When I lost my cousin to suicide I lost my ability to keep my tears in in public. I cried at work, in public (all over town), in airports … everywhere! I found secret solace in keeping a running list on my phone where I noted things that helped me keep the tears at bay (drinking water, working out, eating spicy food, not working out, etc.)

i’m so sorry for your loss, caitlin. thinking of you today.

The other day I passed a street, where I cried in a car during a particularly rough breakup, while on a field trip with 30 middle schoolers. For a long time that street made me so sad even just to drive by and now it just makes me smile about being young and in love.. Public cry spots are the worst in the moment and weird funny memories after

I don’t cry in public often, but several months back, I was caught off guard and of all places, tears started rolling down my cheeks at an Urban Outfitters. It was such an overwhelming feeling. I read a text from the guy I was dating (the first guy that I’ve seriously dated)- it was a break up text. I didn’t see it coming. I was so heartbroken, and everything felt so blurry. I had to hide the fact that I was crying and eventually muster up all the energy to collect myself to walk to the counter to return an item.

Afterwards, I had to go to Wal-Mart to pick up a few things (including a frozen pizza because it’s my go-to comfort food and I knew that was the only thing I would eat that night). Honestly, that entire time I was in Wal-Mart, it was such a blur, but I remember distinctly crying at the self-checkout counter and there was A CAMERA POINTING DIRECTLY AT MY FACE RECORDING EVERYTHING. Goodness, it was such a terrible day. I will never forget that. There’s a Wal-Mart out there with footage of me crying while trying to pay for a frozen pizza. What a day.

Most of my public crying has been in response to the emotional rollercoaster endured while dating one particular long-distance ex:
In the lone elevator, TSA line, and propellor plane from Monterey, CA, to the San Francisco airport and then the entire flight from CA home. Another time, from the point of leaving his car and going through security at San Jose, and the entire flight home. Through multiple hymns and sermons at church. On a bench on Main Street in my home town, right outside a tattoo parlor. Six years have passed and the anger and distress caused by that relationship have passed. Now I can laugh when I think back to the time he left me crying in San Jose. A kind man at the outdoor baggage claim looked from him to me and said, “It’s ok honey. I felt exactly the same way when I left my dad to go to university.”

This reminded me of a time my husband and I were in the McDonald’s drive through, in his car with tinted windows. We could see our friend behind us in her van. She was crying. Made me so sad. We paid for her order but never said anything…It makes me cry when I see people crying in their cars. Like what happened, did someone die? Did they have a fight with spouse or child? I have definitely ugly cried in my car too.