The Gazpacho Everyone Seems to Be Making 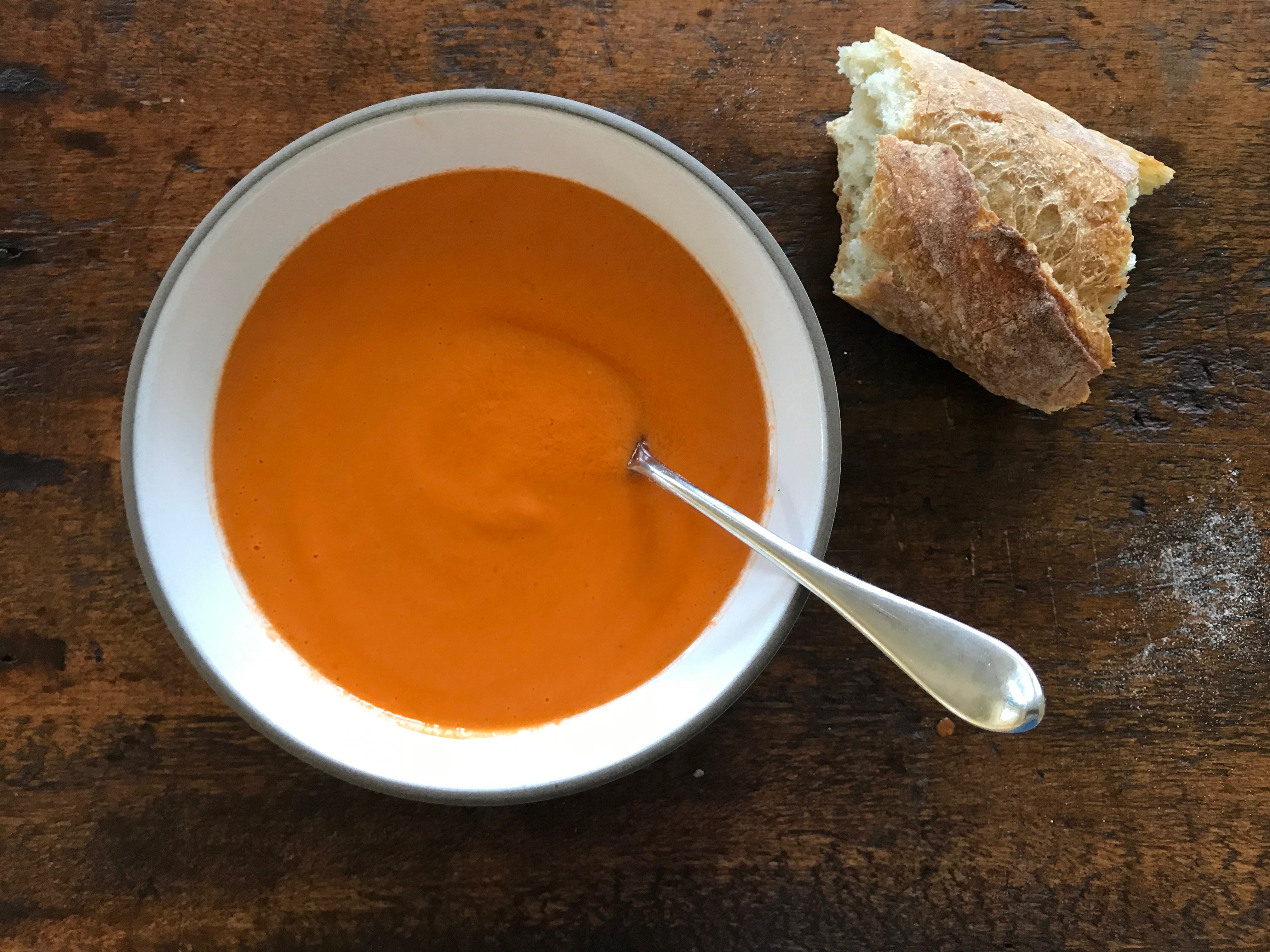 She was wrapping up maternity leave with her first baby and wanted to go for a walk to her farmer’s market, the famous Greenmarket in Manhattan. “I need to get tomatoes for my gazpacho,” she said. Then added, “You’ve made that Times gazpacho right?”

No, I said, I hadn’t. I was also incredibly impressed. When my first baby was three months old, it was a productive day if I brewed my own cup of coffee. I was most definitely not fighting the summer crowds at a busy market, then spending nap time dicing tomatoes, onions, cucumbers, bell peppers and garlic into the kind of soup that I’d always felt was just kind of…underwhelming. And weren’t there, like, raw eggs in gazpacho, too?

No no no, Lia corrected me. “This one is Seville style — no eggs, and it’s the easiest, most delicious thing in the world.”  You just chuck everything into a blender, pour into a pitcher and chill in the refrigerator. Apparently, in southern Spain, people enjoy their gazpacho by sipping it from drinking glasses, not with a bowl and a spoon. “It saves me in the summer,” Lia said. “I make a pitcher on Sunday, then it’s there all week if I want something quick and refreshing.” 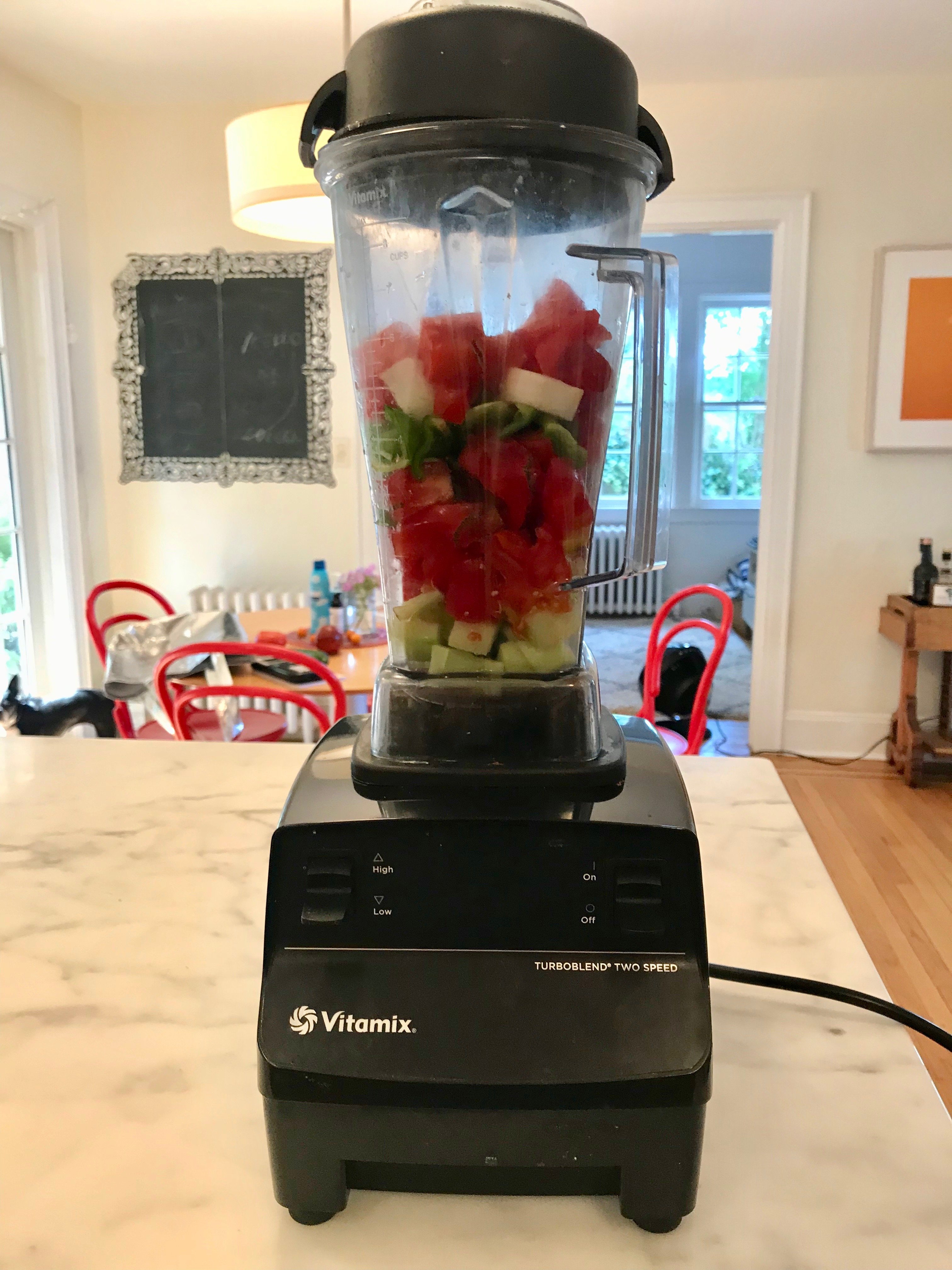 Two days later, I was at my own farmer’s market and ran into my friend Robin at a tomato pile. “Oh, hey,” I told her. “I was thinking of making gazpacho this weekend.” To which she replied, “The Julia Moskin one from the Times?” Umm, yes. Was this a thing? I was beginning to think this was a thing. Especially the next day when the soup appeared in the Times’s Cooking Newsletter (a must-read if you aren’t already a subscriber), even though the recipe was first published four years ago. Before long, my Instagram feed was a sea of orange purees, which meant it was probably time I joined the fray. 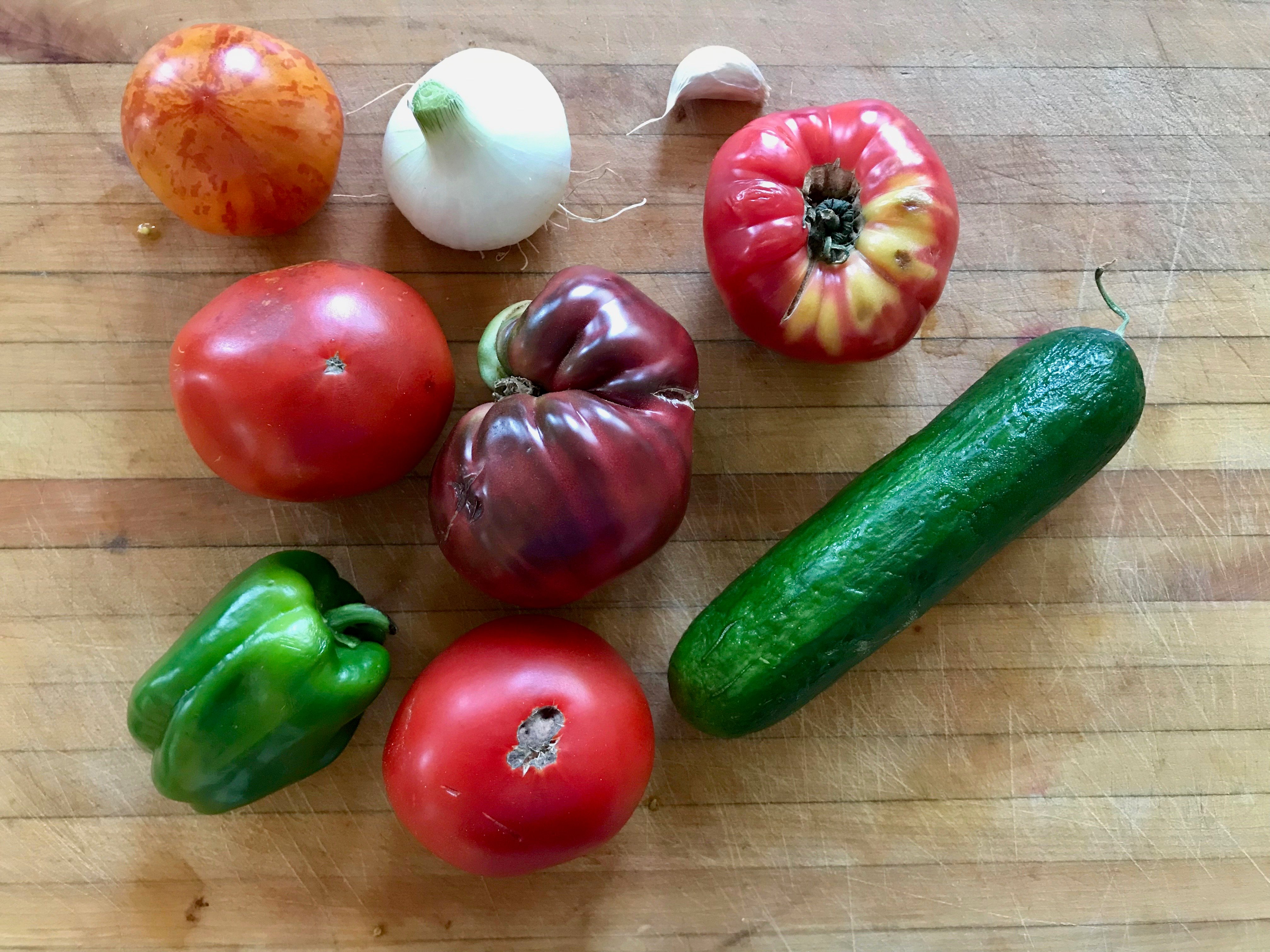 Blessedly, this version of the soup does not require a massive haul from the market. Shown here are all the vegetables I chopped up, and it goes without saying that everything should be as fresh as possible. Other ingredients: salt, a dash of sherry vinegar, and, most important, a few glugs of olive oil, which you add to a whirling blender in a slow steady stream until the soup becomes emulsified and turns an amazing bright orange hue. Afterward, you can strain it, or not. (I skipped the straining because I have a Vitamix blender that’s powerful enough to pulverize the vegetables into the smoothest consistency.) That’s it. 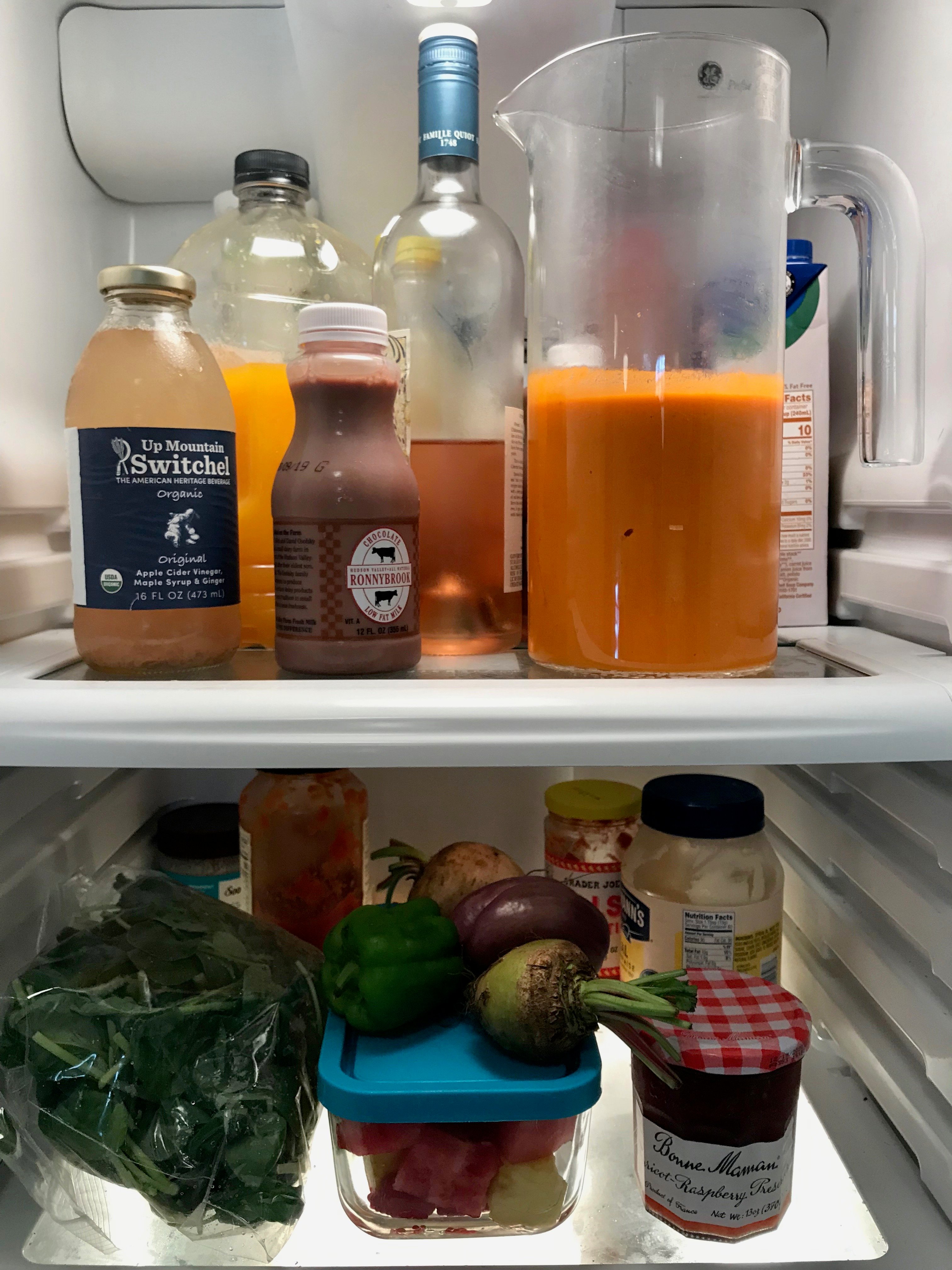 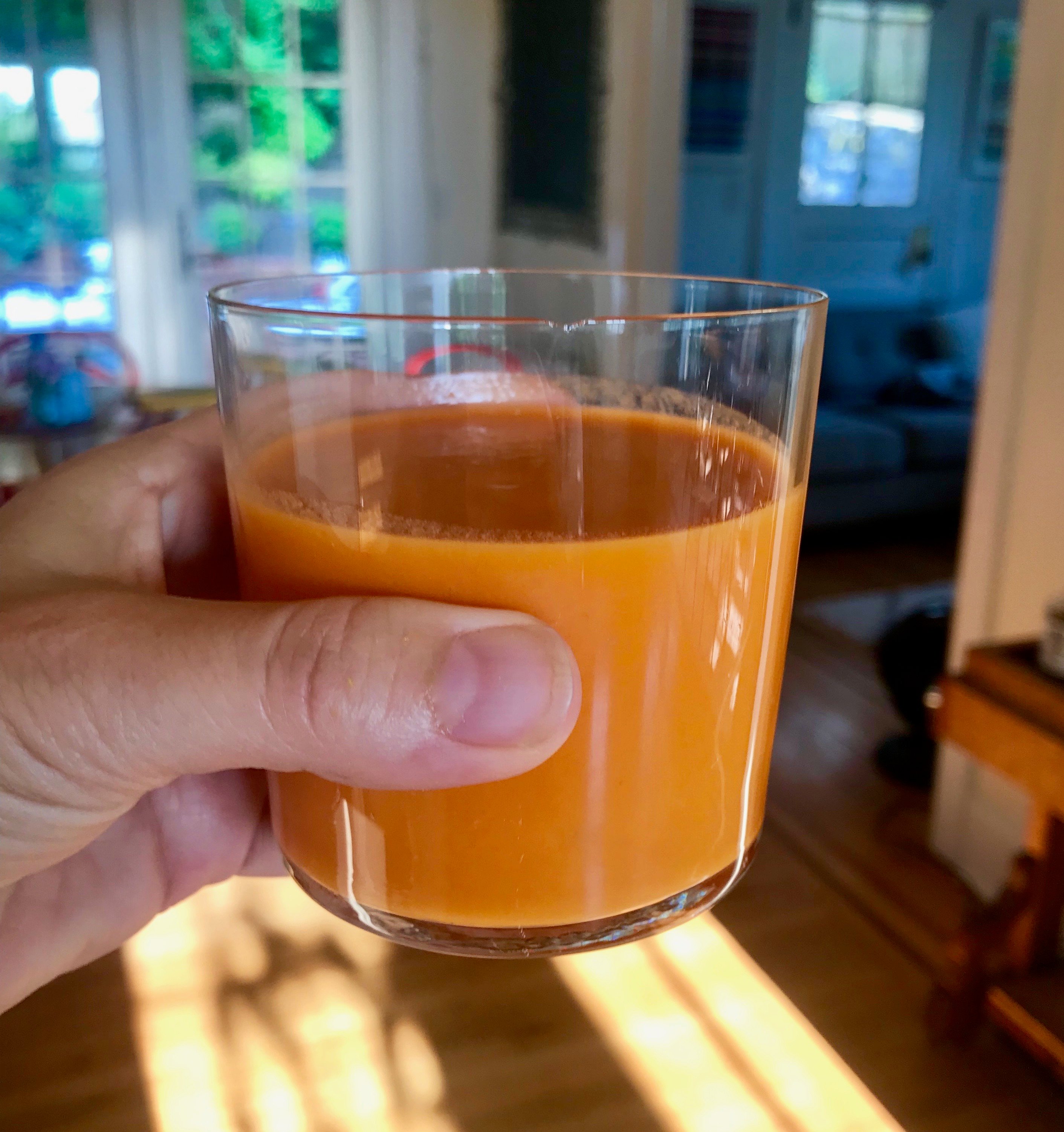 I had a bowl for lunch on Sunday and even poured myself a glass for breakfast this morning.

I did not do everything exactly as the Times recipe instructed. I used a regular green pepper instead of a cubanelle (aka Italian frying peppers), although Moskin says cubanelles are more authentic and have more bite. Personally, I might cut back slightly on the whole onion, next time I make it. But that’s fine! With a recipe this easy and this flexible — Moskin compares it to whipping up smoothies — I am guessing there will be a lot of next times. Starting with this afternoon.

Do you have a go-to gazpacho recipe? And what are your favorite ways to use summer tomatoes? We’re kicking off ‘Tomato Month‘ on Cup of Jo and we’d love to hear from you on the subject!

P.S. A three-ingredient tomato sandwich, baked eggs with tomatoes, and a corn, tomato and chickpea salad.