Why Parents Want to Eat Their Babies 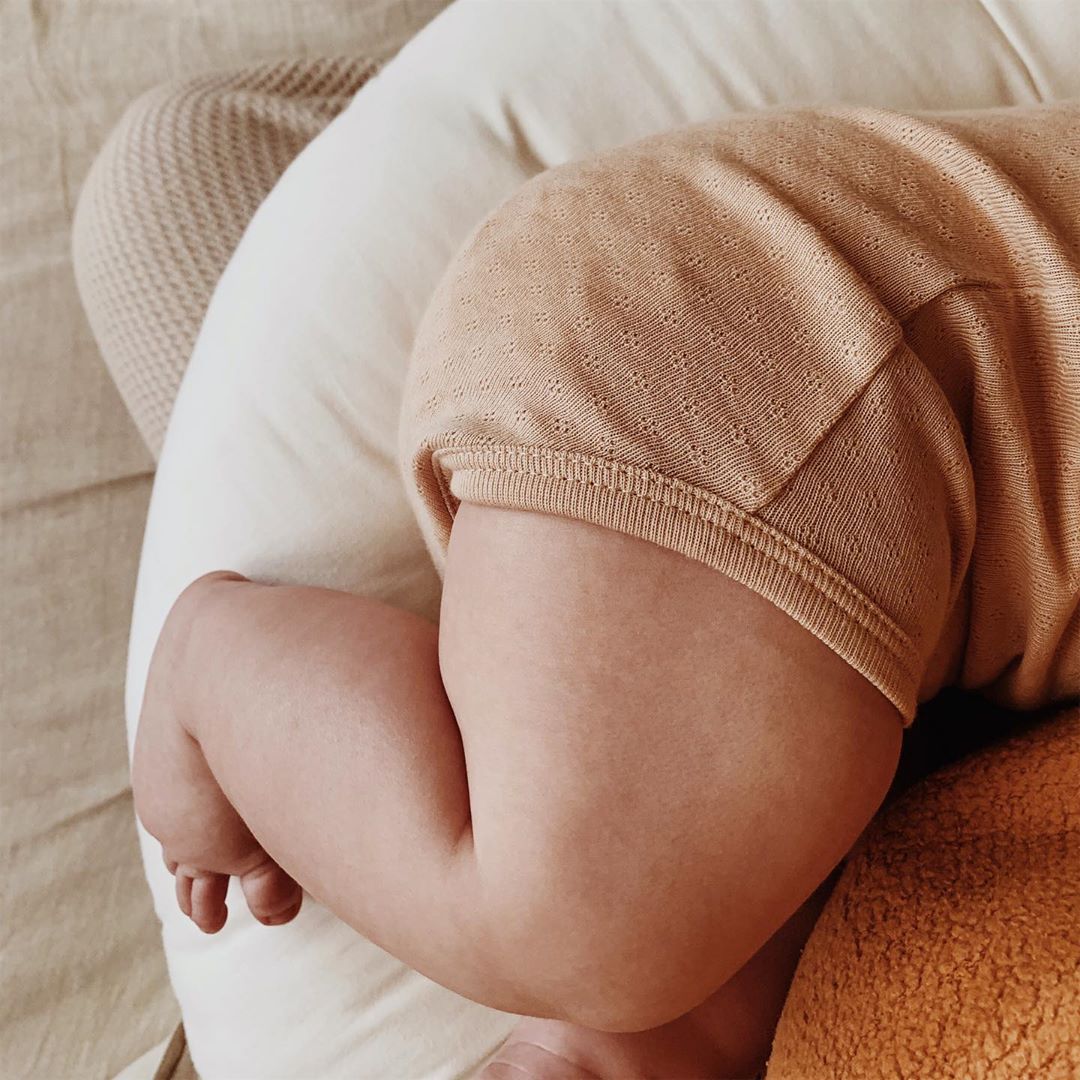 A few weekends ago, we ran into some friends who had just had a baby. I got to hold their chubby little one in my arms, and as I cradled her, I couldn’t help saying…

“I could sink my teeth into that thigh.”

It was a semi-weird thing to say, on the face of it, but do you ever feel the same way? I regularly tell my own boys, “I want to eat your cheeks off,” and “You’re so munchy,” and Alex often announces, “I’m going to squeeze you ’til you pop.” My friend told her daughter that she was going to eat her for breakfast with a spoon, and Caroline nicknamed her dog “Squeezle,” inspired by the daily urge to “squeeze her tiny, fluffy face.”

“Baby-talk can sound downright serial-killer-ish if you take it out of context,” wrote Pagan Kennedy in the New York Times. But social psychologist Oriana Aragón actually did a study about these feelings and coined it “cute aggression.” People sometimes clench their fists or grit their teeth when they see something adorable. Aragón and her team at Yale asked people to hold sheets of bubble wrap while watching a series of photos. And the people popped more bubbles while looking at cuter things (say, a kitten vs. a cat), proving that they really did feel an urge to squeeeeeze.

Researchers aren’t sure yet why it happens, but one guess is that it’s because, throughout the centuries, parents have had to hold their babies pretty continually for those first couple years, and this urge may help us keep them close.

Thoughts? What cute-aggressive things do you say? 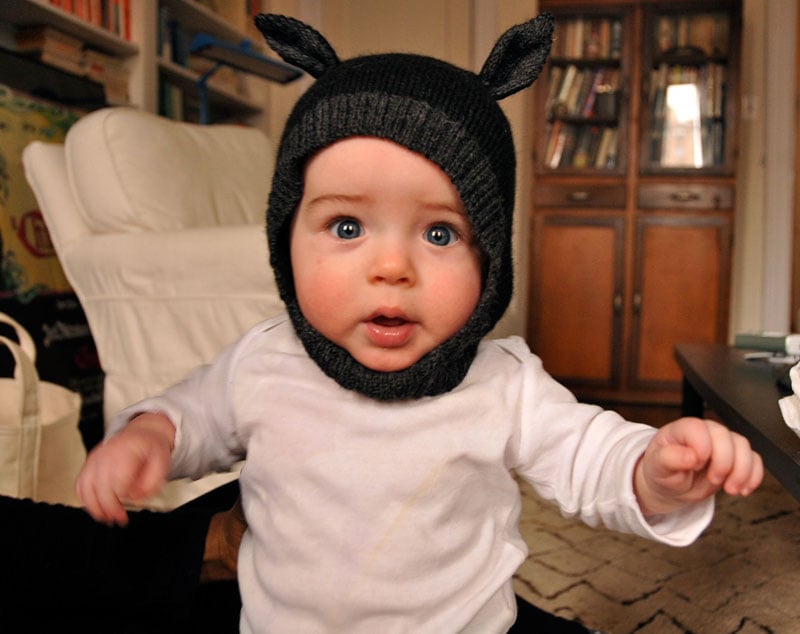 P.S. One thing that has surprised me about parenting, and why kids cover their eyes while hiding.

254 COMMENTS
WRITE A COMMENT
Motherhood
most popular
01
21 Completely Subjective Rules for Raising Teenage Boys
02
Best of: Parenting Around the World
03
Trying Out Slow Parenting
04
How Did You Know You Were Ready to Have a Baby?
05
Three Transgender Kids Share Their Stories
Subscribe
Login
254 Comments
Inline Feedbacks
View all comments
J.O.

Here’s a cool thing my parents taught me when I had kids and not-so-secretly mouthed their thighs: In Yiddish, the word “pulkies” means both baby legs and … chicken drummies! Yiddish–what can’t it do?!

My arm-chair evolutionary explanation is that maybe making contact between our mouths and our babies helps give them beneficial microbes, and/or build immunity? I know transfer of microbes during (vaginal) birth and right after, with skin-to-skin contact, is considered important now. So I can’t help but wonder if kissing/playfully biting babies has a similar role in continual transfer of microbes?

I never wanted to eat anything adorable and cute, but I always want to instantly pet, pop, and give it a big hug and squeeze. And I remember how in 2nd grade this big tall girl used to always aggressively grab and squeeze my cheeks. It was hellified annoying and I hated it, but I realized she meant well so I dealt with it.

I’m sure as a kid, I prob said I wanna hug and squeeze it to death. As I grabbed hold of some soft stuffed animal or what have you.

And the fact that kids, I guess girls and guys, all wanna roughly give a big huge bear hug…aka damn near a choke hold, on some soft, cuddly thing, shows that this is not just a mothers instinct, but basic human/animal nature.

As animals will grab hold of their dolly (like my soft shoe) for dear life and NOT let go. And this is male and female animals that do that!

I often play bite my babes ribs and thighs… we say, “Leg rolls for dinner!” Or “time for some baby short ribs!” I often tell my husband, “I just want to bite his little legs. Can I do that?”
I have heard this feeling described as a counter feeling. Becoming aggressive when something is so dang cute and lovable is our bodies way of regulating the overwhelming feeling of cuteness.

My 2 yo son recently started sweetly grabbing my face and saying “I eat you up!” before gently biting my cheek and laughing with glee. It is truly the best.

I’d often sweetly tell my toddlers “I want to eat you up!” My younger daughter was about 3 years old when she very sweetly offered for me to eat her elbow. It was at that very moment that I realized that I had been — over and over — saying something horrible to my kids! I explained that I didn’t really want to eat her, that it was just a term of endearment, and never ever said it again!!!!!!!

This is so funny! We turned it into a game/joke in our house where I’ll says ” can I eat these chicken legs?!” and my kids laugh and say “Nooooo! Don’t eat me!” And then my 2 yo son took it a step further and plays a game with me where he says “eat mama?” and I say “noooo!” and laugh, and then he’ll keep going, naming things you can and cannot eat

“I just wanna EAT THOSE CHEEKS!” every single day. Also the clenching of the teeth—holy moly that had returned with a vengeance since I had my son! He’s just so darn cute I find myself clenching my teeth ALL. THE. TIME. ?

We have a word for this in Tagalog–it’s called “gigil,” that feeling when something is so cute you want to shake them or pinch them or squeeze until they pop, as Alex would say. I still haven’t found a good translation for this feeling in English, but I guess “cute aggression” is as close as it’s going to get!

I think I want to eat chubby babies because I want to keep their cuteness with me, it’s too sad to think it will go away. Saying “I want to eat you” is like saying “I don’t want to let this lovely chubbiness go away”. When I was very young I remember gently biting my mom’s arm because I loved her so much and she was soft and smelled good.

My kids loved the Wow in the World episode on this, and that’s where I heard about it too! It’s so fascinating. I definitely have the need to kiss and feel and smell my babies’ cheeks, and clench my teeth when something is super cute as well. My single friend told me, “I always clench my teeth when I hold babies, I don’t know why!” It’s funny to think about why we have these crazy urges!

Inspired by “Where the Wild Things Are,” I say, “I’ll eat you up I love you so!” And I often ask, “Why are you so delicious?!” She’s just sooooo cute!!

I feel like I read an article that was about this a few years ago. It has something to do with evolution, and how in caveman times babies, who were essentially the ultimate prey, would use their cuteness as a protection against actually being eaten or discarded by their parents, almost like a camouflage or defense mechanism. Which is kind of hilarious to imagine – Parents, the wily coyote, constantly chasing after our cunning roadrunner offspring. Babies, the ultimate escape artist.

I chipped a tooth! I had never noticed before, but when I’m feeling overwhelming love for my little guy, I guess I clench my teeth – hard! And I totally chipped my top front tooth. Dentist had to repair it but pointed out that it’s not as strong as enamel, so now I’m hyper-conscious that my love for him makes me grit my teeth ALL. THE. TIME!

Slightly afraid that if I have more kids, I’ll end up toothless.

(I want to go nibble him in his crib right now thinking about it!)

Thanks for sharing and giving some insight! I always find it so strange that this is a thing because when you think about it, it is so weird that would be something you’d want to do when you find something cute! Haha. Wilmington, DE

https://www.wnycstudios.org/story/asking-another-friend
on this episode radio lab is talking about this feeling …..

Recently I did my usual spiel of “OMG I WANNA EAT YOU” etc, etc and my two year-old turned to me with a horrified face and said, “MAMA NO! NOT ME! EAT FRENCH FRIES!” Sorry kid. Fries just aren’t as tasty.

Funny! I always tell my boys “I love you so much I eat you up!” like in Where the Wild Things Are. And, then I hear it and think, “Wow, I’m kind-of a creepy mama!”

Loved this!
I feel the same about my chubby bubba’s. But I actually do ‘eat’ them. I bite them with my lips in stead of my teeth, and they think it is the greatest thing. Blow kisses also are very effective when I feel the ‘eat them!’ craving and they also love that.

My parents haven’t been together for over 30 years and I’m now not close to my mum. My dad died last year and was an absent father and kind of a disappointment ( we discovered on cleaning out his house after he died he’d been running brothels) but one think that comforts me and makes me feel like I did once have parents , is my mum telling me when I was a baby, they used to race each other to get to kiss my morning cheeks first .

This is so touching. I’m sorry that all of their parenting wasn’t as lovely as those mornings in the early days. <3

Thank you for explaining this! Finally someone explains it! I always feel so creepy when I message my sisters “I WANT TO EAT HIM” when they share pics and videos of my nephews and nieces. It sounds so creepy!!

Once told a friend I wanted to eat her baby’s thighs and went so far as to say… “Lets just pop them in the oven, they’ll be delicious!” Writing it down makes it sound certifiable. Somehow we are still friends.

Then, more recently to my own 3 yr old son I said “Gimme those leggies, I’m gonna eat them for dinner!” And he had the cutest reply: “NO mama, I’m not delicious!”

Reply
Caitlin
Reply to  BC

My daughter says something similar: “Do you want to see me again? Then don’t eat me up!”

I often say I want to eat cute things with a spoon! It’s bizarre, also because I would never say a fork, always a spoon. I think because spoons you eat sweet things like ice cream and sweet things = cute things…?

One of my nephews is really struggling since he got two new baby brothers. When he starts acting up I say in a very stern voice, YOUNG MAN DO YOU NEED A ZERBERT? IS THAT YOUR PROBLEM? COME OVER HERE RIGHT NOW. And he starts laughing and offering me body parts to buzz. Works every time.

This is so sweet. Poor dude is probably really craving some attention. You are one good aunt ;).