The Crazy Thing We Did at My 40th Birthday Party 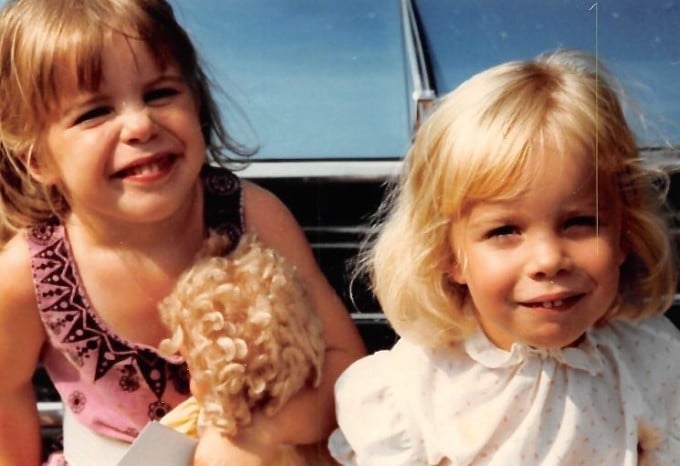 YOU GUYS IT’S HAPPENING!!!!!! Today, my twin sister, Lucy, and I turn forty. It feels so nuts to say that. (I keep thinking about what my childhood self would think!) Anyway, this past weekend, I had a party at home, and the weirdest thing went down… 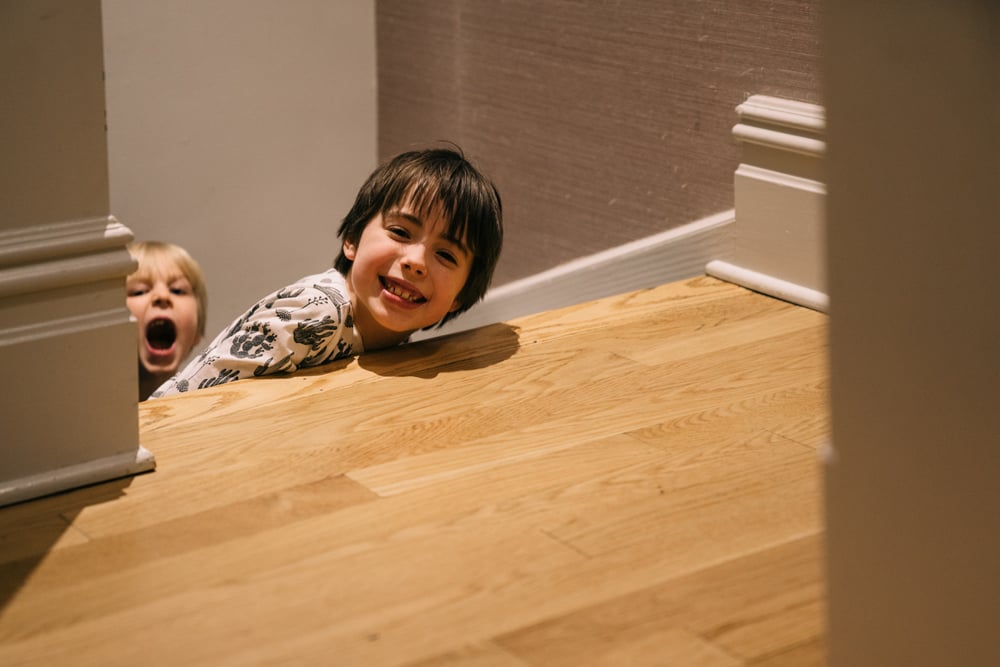 The party started at 6:30 p.m., so the boys were still awake. They tried their hardest to sneak upstairs to join! 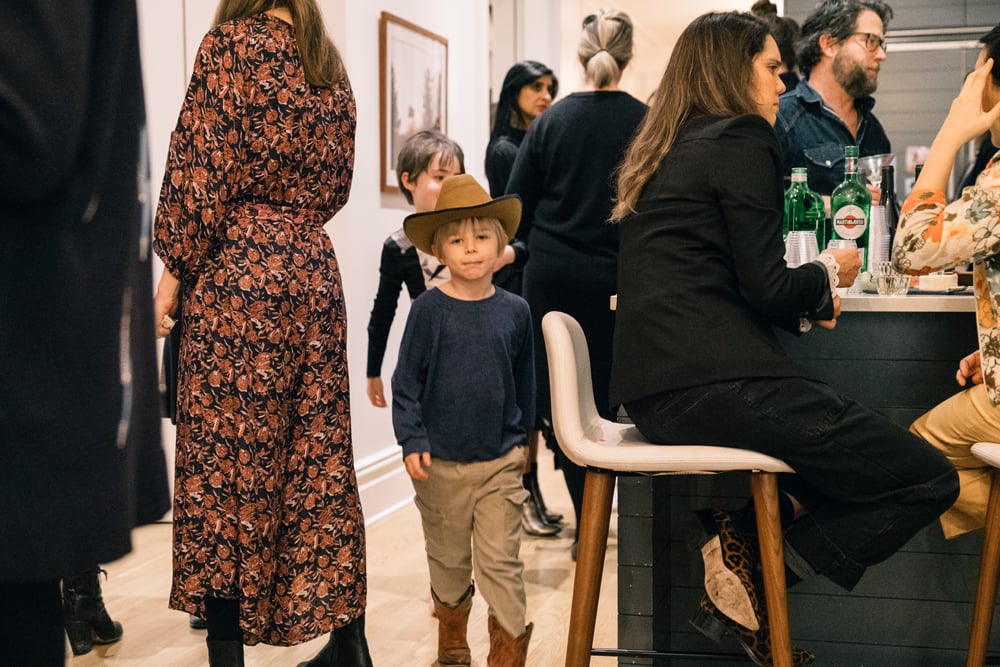 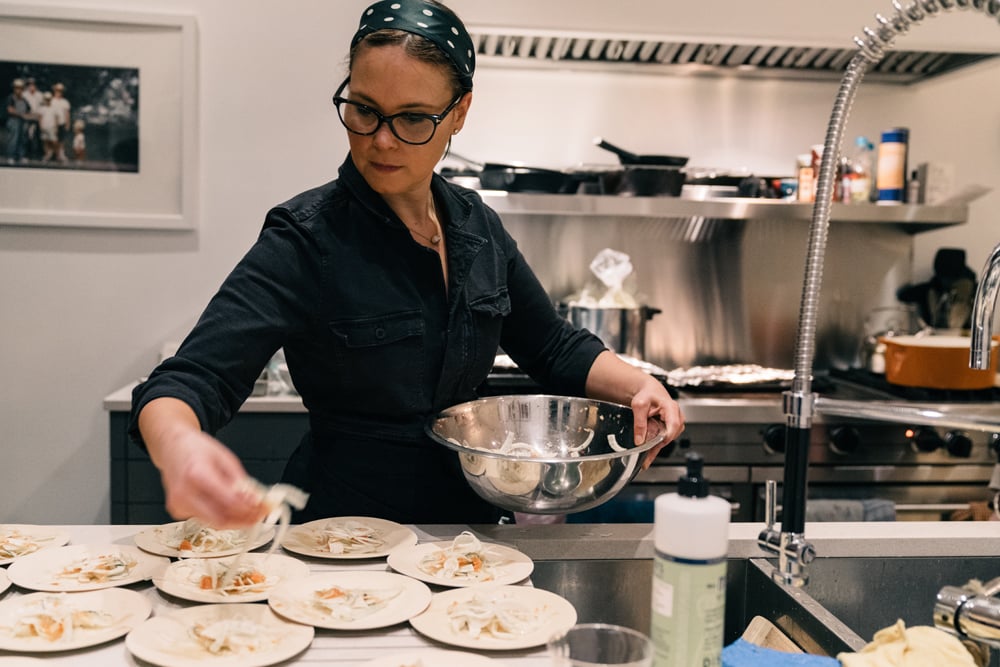 We’ve never hired a caterer before, but for this milestone, I really wanted to soak it all up and be present with my friends, so we decided to go for it. My food-writer friend recommended the wonderful Ana Ortiz, a former restaurant pastry chef. Here, she was preparing a winter salad with fennel and citrus, and she made everything feel so effortless. 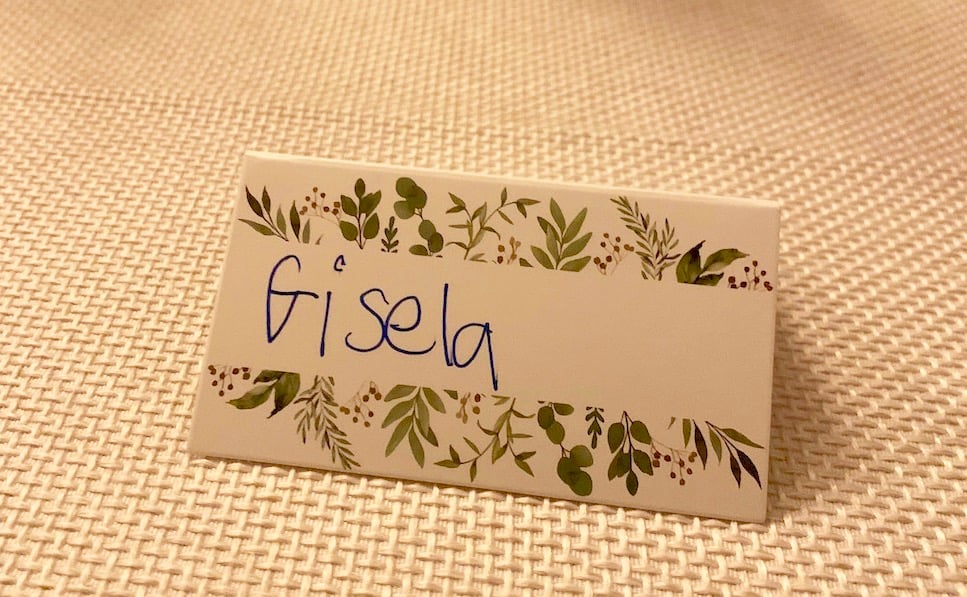 Toby made the placecards! 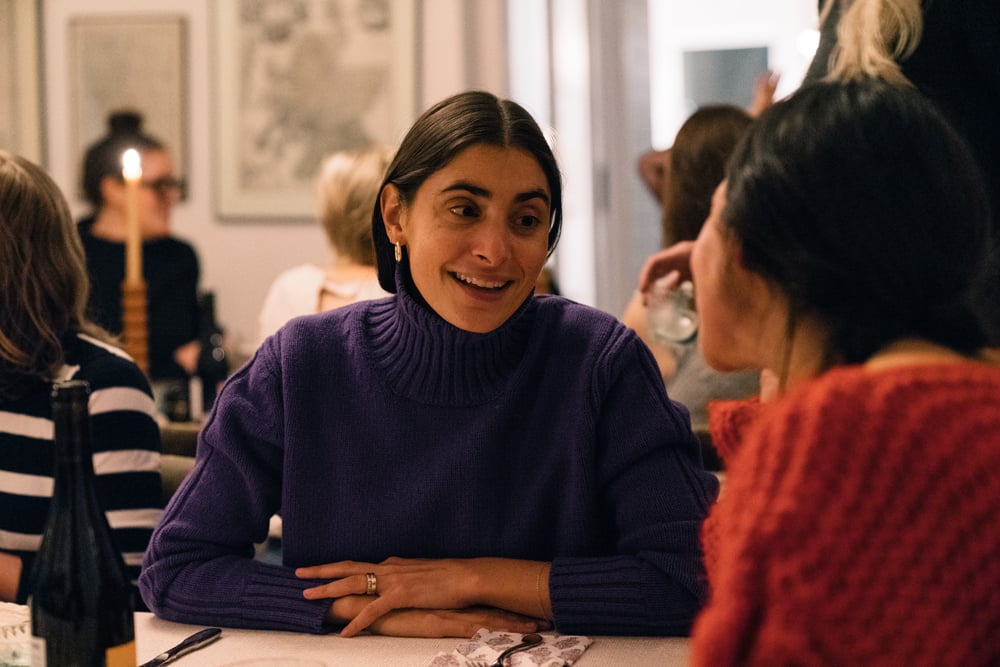 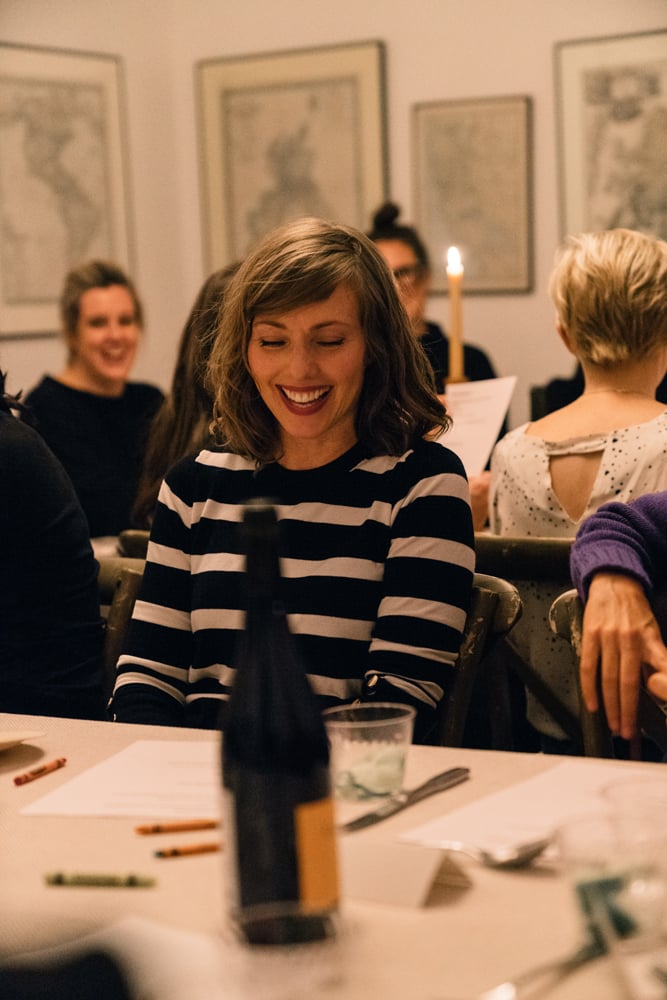 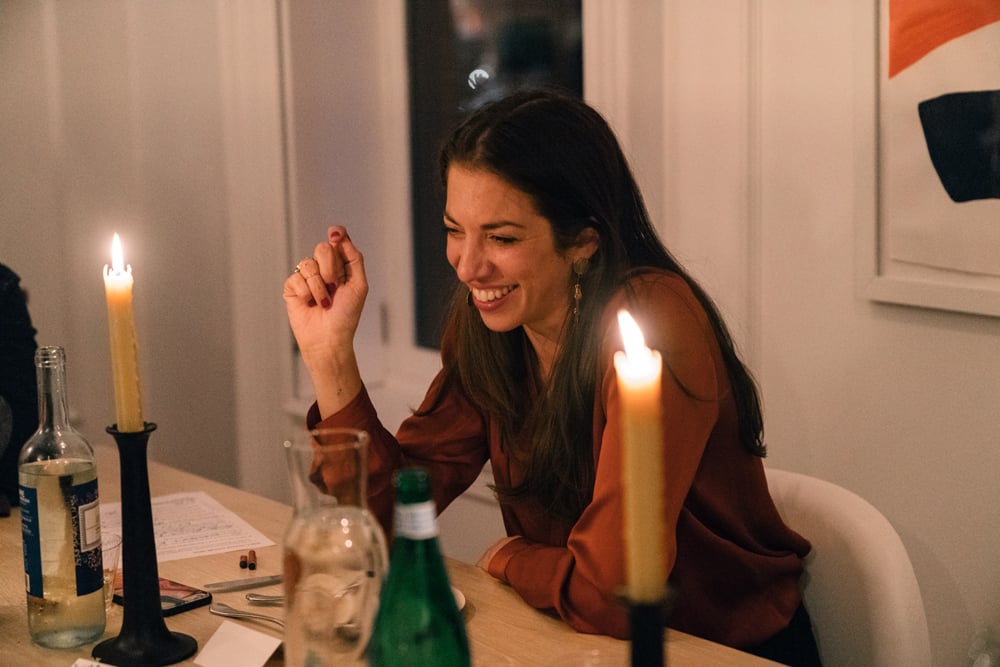 This year, the guests were all women. As I’ve gotten older, I’ve felt such a strong kinship with women and wanted to be surrounded by that magical energy of book-loving, joke-telling, lipstick-wearing ladies. 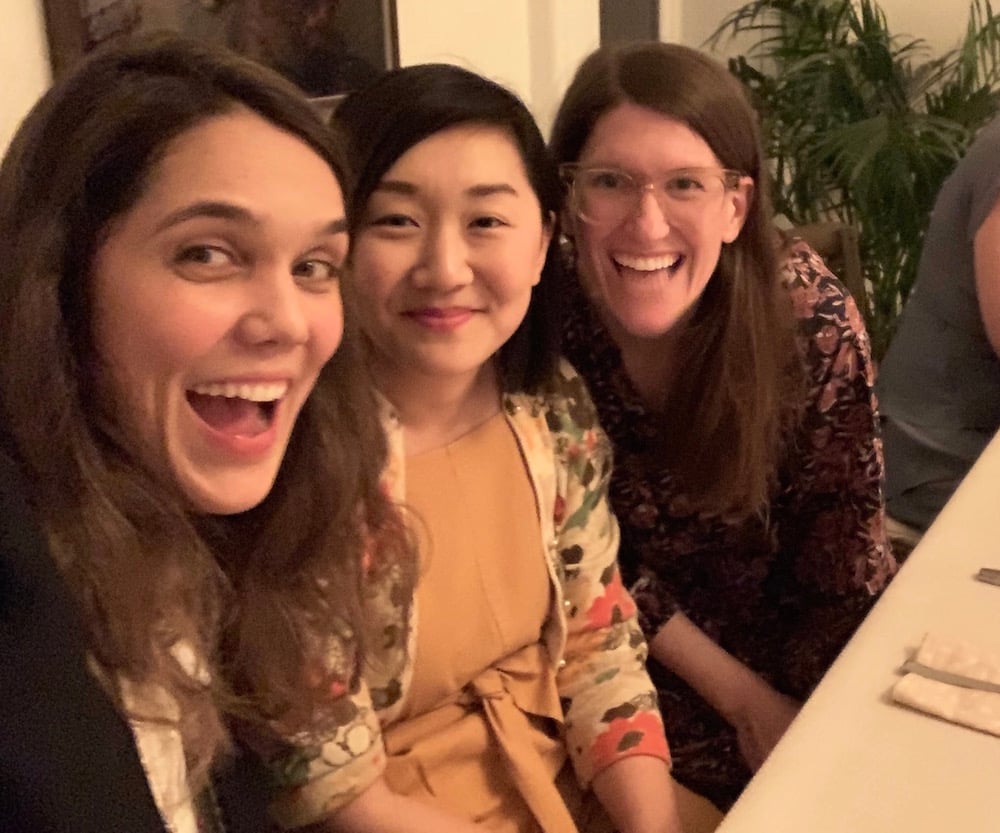 (A selfie with the soup group!) 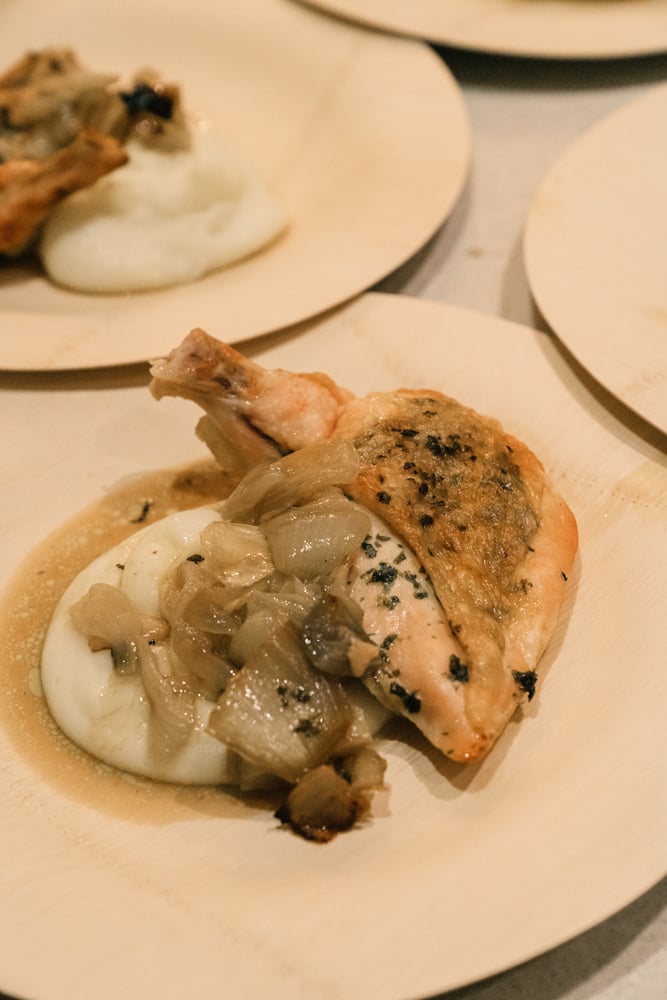 For dinner, we had delicious roast chicken, creamy mashed potatoes and “schmaltzy onions.” Sometimes the best meals are the simplest, don’t you think? 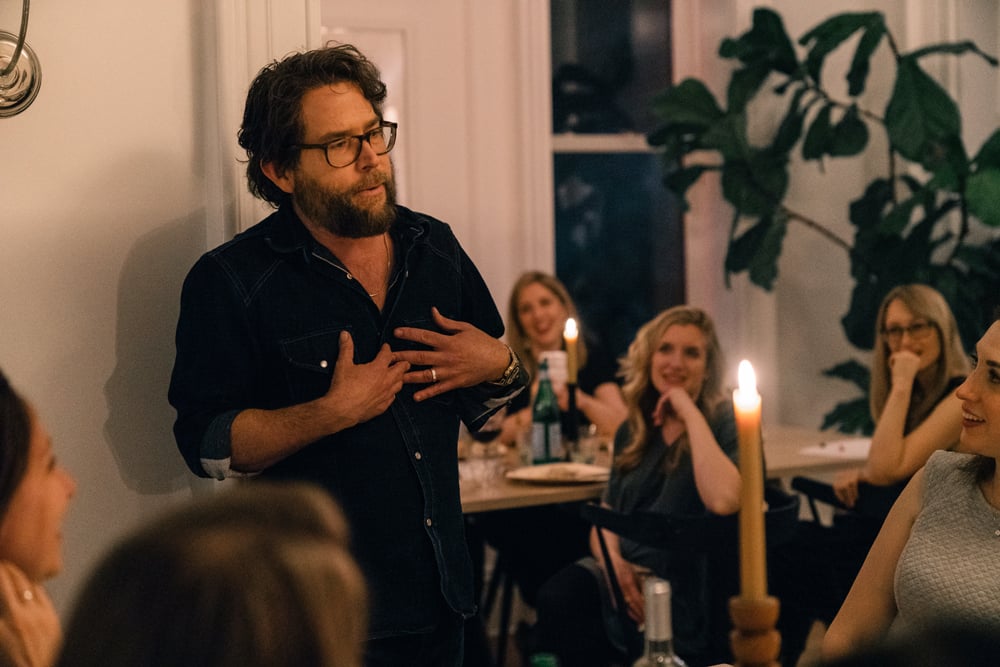 Alex had planned to go to a friend’s house while we had our ladies’ dinner. “I’m not here,” he said to the first few people who arrived, as he gathered his shoes and jacket. “I’m a ghost.” Fifteen minutes later, he was mixing everyone martinis — and of course he stayed all night. I was so glad he did! Here he is, giving a toast, which was extra sweet because he hates public speaking. 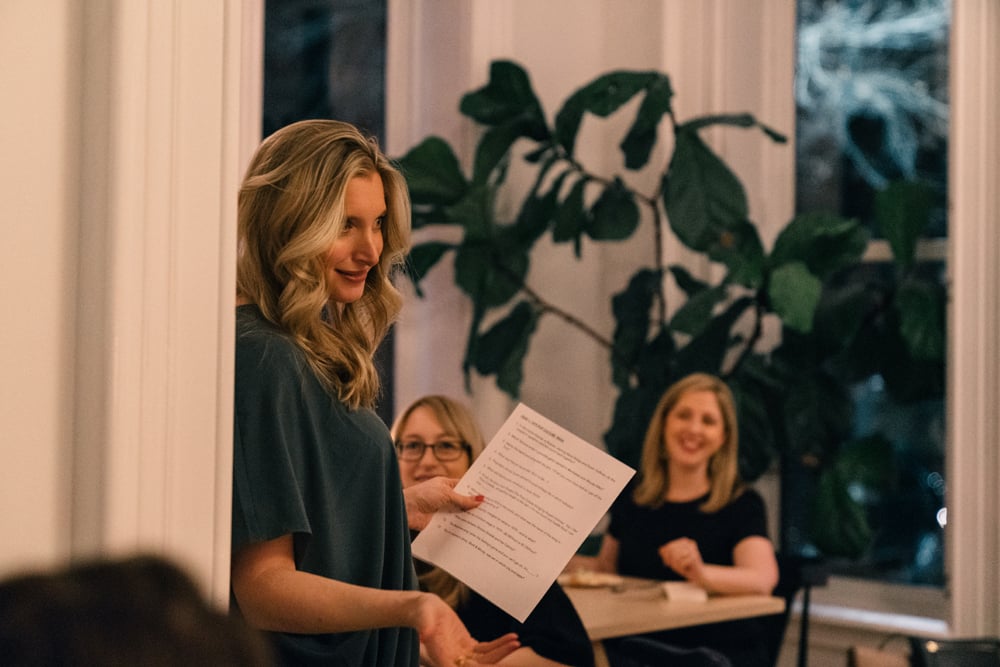 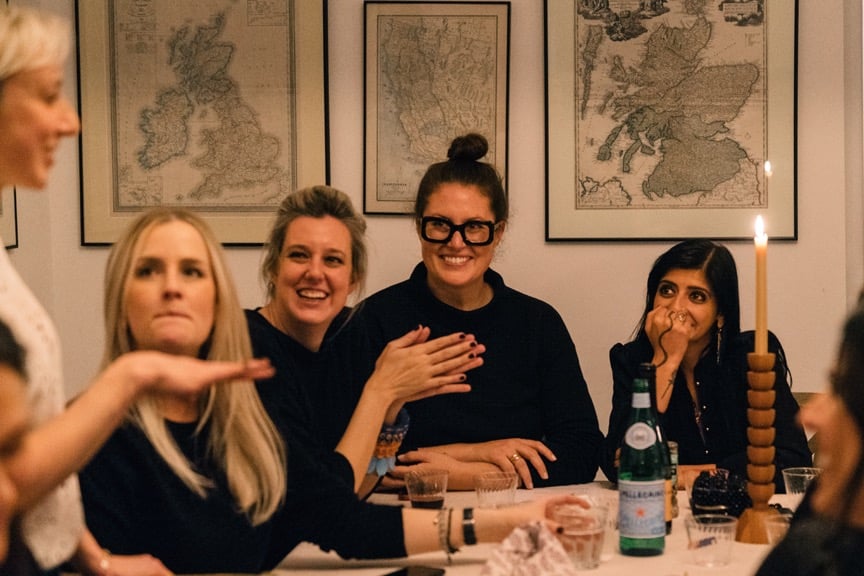 Some friends — including Gemma! — also gave toasts and brought down the house. 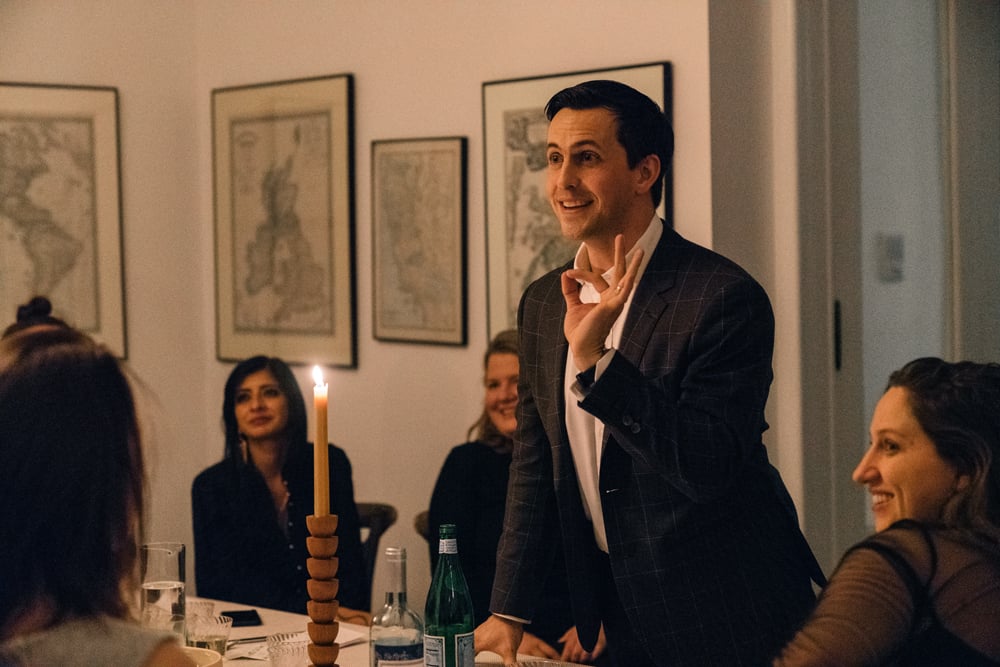 But the craziest part of the night was seeing mentalist Ryan Oakes. YOU GUYS IT WAS BANANAS. 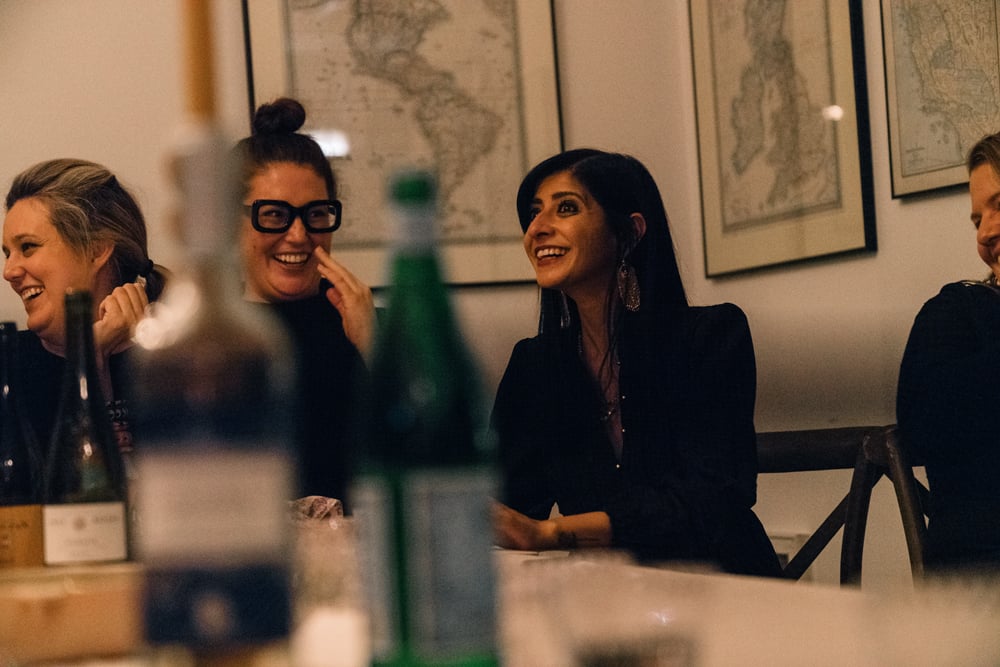 Look at the expressions! It was MINDBLOWING. We were trying to reverse-engineer his tricks, but we couldn’t. He guessed people’s phone numbers, figured out words they were thinking, and made a shot of tequila come out of nowhere. 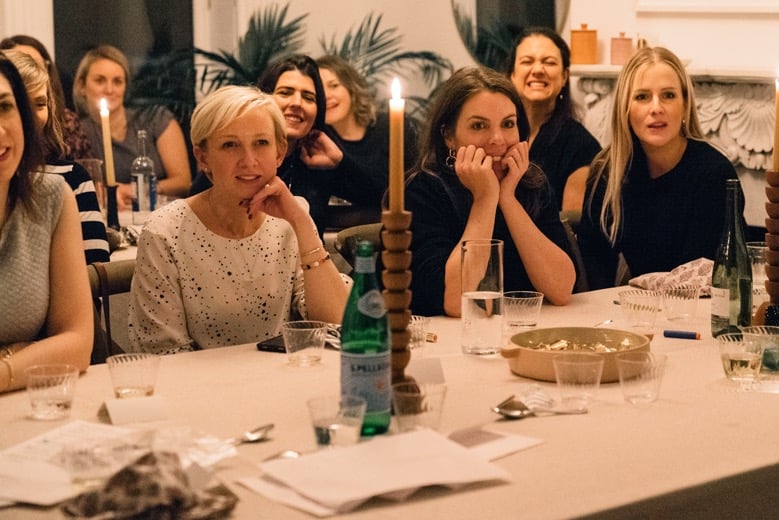 At first, we were SUCH moms. I kept thinking, ‘I’m so nervous for him! I’ll clap no matter what!’ My friend Alex said, “I was rooting so hard for him, imagining him as a seven-year-old working on his tricks.” But when he killed at every single one, our amazement took over. “More like sleight of hand-SOME,” joked my friend Lucy. “Should I quit my job and be a mentalist?!” 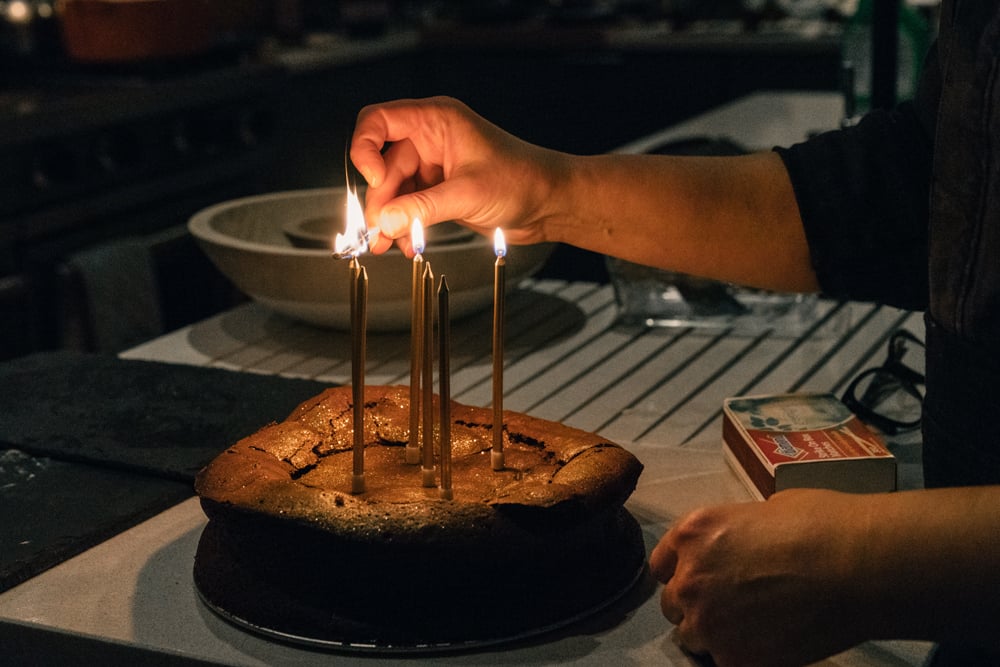 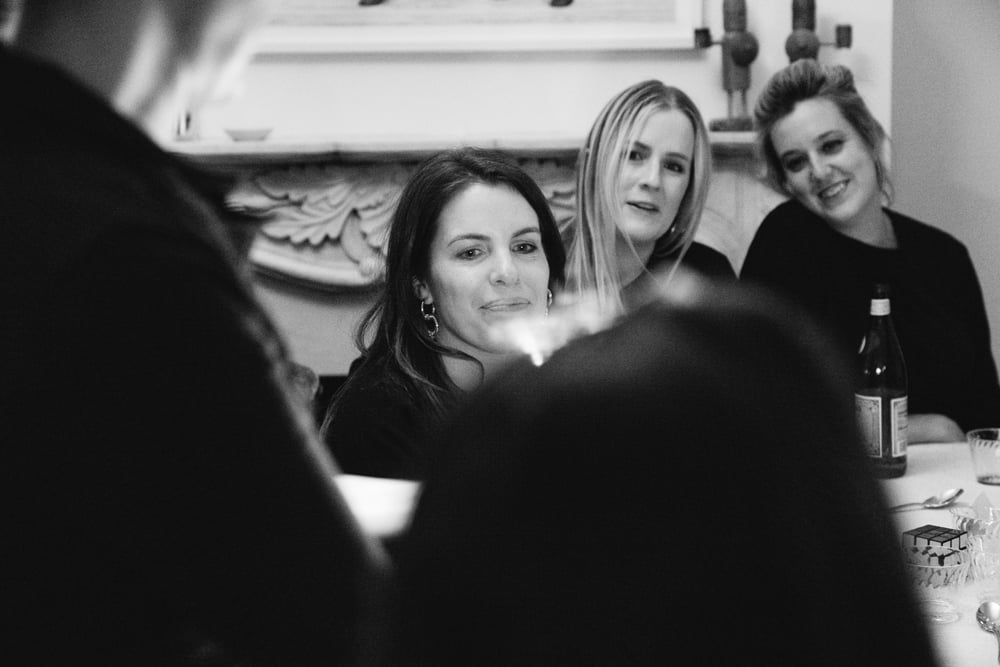 Finally, we had flourless chocolate cake, and as I blew out the candles, I teared up, feeling so lucky to be in a world with such amazing women — these friends and neighbors, this Cup of Jo community, and the people out there who are raising kind children, sharing their light, and doing such good work in the world.

Thank you so much for reading. xoxo

P.S. Two birthday realizations, and a foolproof present for $1.

(Photos by the lovely Julia Robbs for Cup of Jo.)

Happy belated birthday! I’m happy to share that turning 40 starts a whole new era of being strong and awesome. For my 40th birthday party (a few years ago…) I rented a huge inflatable movie screen, covered the yard in lawn/beach chairs, invited all the great women in my life, watched my favorite movie (Moonstruck) ate delicious food and had an ice cream sundae bar for dessert. As I get older, I realize that the female friendships I have are what sustain and inspire me. These friendships are a beautiful love story of their own.

happy happy (belated) birthday, it seem you all had a great time! What a wonderful idea a ladies only party.

Hi Joanne! Your post has inspired me to host my own fortieth coming this fall! I’ve been putting it off with a lot of pain associated with the number as I have yet to find ‘Mr. Right” and desperately want to have children. I know many options are still available to me but this number seems very much like a marker not in my favour. Although, much like you, I am surrounded my a formidable group of women and your post prompted me to celebrate what I have, rather than what I want. Thank you for prompting this very significant shift to my thinking! And of course, most importantly, HAPPY BIRTHDAY!

are you still friends with the gal who wrote the blog about living in NYC. ugh i can’t remember her name but I loved that blog.

Yes! Sharon! She came to my birthday party and slept over afterward, I adore her :)

Happt bday Jo! Its a joy keeping up with your blog :)

Where oh where are those fantastic wooden candlesticks from?

here! :) i borrowed them from my sweet friend liz for the evening:

This is so wonderful and bizarre….because my 40th was January 21st and my husband threw a surprise birthday party for me that only included all of my girlfriends. He was supposed to leave, and stayed and it was the most wonderful evening. And he’s a journalist that hates public speaking haha.

Happy birthday, sweet Joanna, and thank you for all your work, i absolutely love reading you ***

Happy Birthday Joanna! Thank you for being you and bringing such positivity to this world through your blog. I hope to one day be more like you. :)

Adding my happy birthday wishes and heartfelt thanks for building this community! <3

Thank you Jo for the light you bring to this world. I have been reading your blog for years and it is everything. Happy Birthday to you!… And thank you for creating a space for curiosity and dialogue. xo

Happy birthday!! Been reading Cup of Jo for more years than I can count and love the community you’ve built. So lovely to hear you had a wonderful night to celebrate yourself!

Awww, Happiest of Birthdays, Joanna! This post had me tearing up for you.
I’m so happy you had such a love-filled celebration. Thank you for creating this beautiful corner of the internet. I applaud your courage, creativity and the way you love your family! Wishing you all the best, happiest, juiciest things for year 40, lovely!

Can you please tell where your beautiful friend with the black chunky frames got her glasses?

So lovely. Happy Birthday! I love the part about Alex staying and you guys fearing for the mentalist before he wowed you.

Happy birthday from a guy / dad in London who has read CoJ for many years! Looks like a wonderful party

Happy belated birthday!
I so admire your love for and camaraderie with other women. It is so inspiring! I also love your friendship with Gemma – I have followed your friendship the way others follow hollywood romances. So sweet!

I have been reading your blog for YEARS. I am currently in the thick of the newborn stage with my first baby boy so I don’t get to “catch up with you” as much as I would like. However, whenever I decide to give myself just 30 minutes of “me” time, I fire up your blog for pure self-indulgence. Happy Late Birthday! You will never know how many of your posts have truly impacted my life. I am hoping your next trip around the sun is as wonderful as you are!

Happy, happy birthday, Joanna and Lucy! You both bring so much light into the world and I’m so grateful! May the year ahead bring much happiness and love!

Happy birthday dear lady!
Your work has bettered my life, no doubt, and I’m so grateful,you are alive and who you are, and that your voice has reached me on the other side of the country. You are lovely, and deserve the best in life.