What Happened When I Started Intuitive Eating 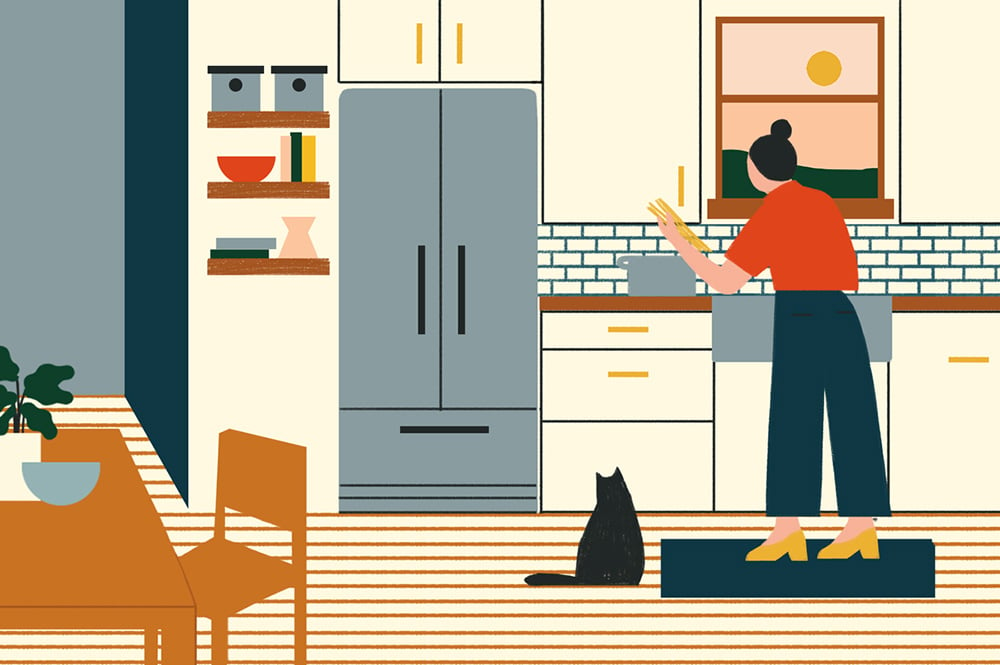 I turned to my husband in the kitchen this morning and said, “Huh, I think I’m going to have a piece of cake”…

It was 6 a.m. and we’d been up for five hours already, wildly jet lagged from our recent honeymoon. (The cake was a mini version of the one from our wedding, which he’d surprised me with the day we came home.) He nodded, then shuffled back toward the bedroom, utterly unfazed by my cake announcement. A few minutes later, as I forked through a slice of leftover passion-fruit cake, I had a thought, and smiled. I was utterly unfazed too. Five years ago, this moment would have been a crisis — another rock bottom from which I climbed up on the flimsy rope of the next diet plan, hoping like hell this one would hold until I made it to the top. Back then, I might have eaten three or four cake slices right out of the fridge, shoveling them in like a thief, keeping one eye out for witnesses and barely tasting a thing. And then I would have snuck back into bed, stuffed and panicked, and Googled “paleo” and “whole30 before and after” until the sun came up.

That was how I lived back then. I’d spent my whole life searching for the diet — or nutrition plan, or “lifestyle” — that would fix my body and therefore everything else in my life. The fact that none of them did was, I knew, my fault alone. I was the failure. I was the cake-hoarding maniac who didn’t know how to eat like a normal person (despite the decades of research I’d devoted to the subject). I wasn’t a person at all, really. I was just a “before” picture.

Then one morning in 2013, I was outside running through a punishing pre-breakfast workout when it suddenly occurred to me: Oh, diets are bullshit. I wasn’t the failure. I was playing a losing game. Dieting failed more than 80% of the time (I’d read the studies! I knew this!). I felt like someone raised in a cult, finally recognizing my leader as a fraud. But I didn’t know any other way. I needed some kind of diet deprogramming, but did that even exist? As it turned out, yes. It’s called intuitive eating.

That’s how I describe intuitive eating when someone asks me what it is. It’s not a new concept; the anti-diet has been around pretty much since the diet. Dietitians Elyse Resch and Evelyn Tribole were among the first to turn it into an actual program, which they laid out in their book, Intuitive Eating (first published in 1995, followed by two later editions). Intuitive eating was soon adopted by a number of nutrition professionals (and eating disorder treatment programs), but still, it’s the kind of mystical-sounding phrase that often raises eyebrows — which tend to shoot up even higher when I explain the fundamentals. In intuitive eating, you can (and should) eat whatever you want. There are no good or bad foods, no points, no goal weight — no focus on weight whatsoever. The point is to eradicate all those judgments and emotional hang-ups we’ve attached to eating, and learn to see food as just food again. Perhaps even crazier, you learn to trust yourself to make your own choices. Everything is on the table.

If that sounds bananas to you, rest assured, I felt the same. One of the first things I told my nutritional counselor, Theresa Kinsella (an RD trained in intuitive eating), was that I was unable to control myself around carbs. Her response? Eat them. She told me to listen closely to my cravings, as well as my hunger and fullness. The reason I felt so crazy around bread was that I’d spent so many years treating it like forbidden fruit. The only solution was to let myself off leash, eat all the bread my body asked for, and soon my brain would get the message that bread wasn’t going anywhere. Once it sunk in that this wasn’t another between-diets binge period, I wouldn’t feel the burning urge to fill up on starchy delights before the free-for-all was over and it was back to “being good.”

So, terrified as I was, I followed instructions. I ate bread, potatoes, pasta, all of it. I felt like the very hungry caterpillar, but with pizza. A couple weeks in, something happened. It felt like a fist slowly unclenching, in my mind. My intense carb cravings mellowed and suddenly I could hear my appetite beneath them. Can we get some more protein in here, please? And any chance a salad came with that pizza?

I reported The Great Carb miracle to Theresa. She simply reviewed the food journals I’d kept and said, “You know, you didn’t actually have all that many carbs, right?” I thought I’d been going hog wild, but Theresa pointed out that even at my high point, I wasn’t eating much more carbohydrate than that which my body and brain needed to function. Of course, it hadn’t occurred to me that my body and brain did need it to function. (FYI, we all have our own “forbidden fruit” foods, but this carb obsession is extremely common, particularly among dieters.) It had been a long time since I thought of carbohydrate as just a basic nutrient, rather than The Enemy. Theresa reminded me: “You need full permission to eat.”

Making peace with food and gaining permission to eat it is one of the ten principles of intuitive eating. These are not to be confused with food rules. Intuitive eating principles include honoring your hunger (if you’re hungry, eat!); prioritizing satisfaction (if your appetite wants chocolate, don’t try to trick it with a piece of gum); and respecting your body (because hating it won’t help). All of these pillars are crucial and life-changing, but permission to eat is, perhaps, the first and highest hurdle to leap — especially for a lifelong dieter and occasional disordered eater, like me. I was so accustomed to eating with guard rails and following plans that the idea of just asking myself, what do I want? and eating it — in public, even — felt like a radical act.

Frankly, this is all pretty radical in a diet-addled culture that insists all foods are either good or pure evil. In those early months, I felt less like an ex-cult member and more like a heretic. Friends asked things like, “But if you can eat whatever you want, won’t you just eat donuts all day?” or “What about health?” It always struck me as curious (and telling). Because if you take ten seconds to actually think about these questions, the answers are pretty clear. No, of course you won’t eat donuts all day. Has anyone ever eaten more than three donuts and not felt totally gross?

As I continued practicing intuitive eating, I noticed I didn’t actually like some of my so-called “favorite foods.” I used to lust after fried food like General Tso’s chicken — preferably the kind sitting under a heat lamp in a midtown salad bar. The first time I ate it after starting intuitive eating, I had to stop a few bites in. I could suddenly taste the reheated stale grease, and noticed how instantly queasy I felt. I was hungry, I realized — and this wasn’t going to fill me up. It was just going to make me feel lousy. I needed something with substance. I had similar revelations with frozen yogurt (Nope, my body said. If I want real ice cream, don’t try and fool me with this) and Diet Coke (yuck, that aspartame!). It’s not that I suddenly craved only organic, wild-caught, sustainable and ethically prepared fish. But I became a much more engaged and aware eater. I learned the specifics of my taste, the relationship between my appetite and energy level; I learned how to make myself feel satisfied and fueled.

I also learned it didn’t always work out perfectly. Sometimes I’d get held up at work, come home starving and stressed and scarf down a bag of chips. Other times, I didn’t have the cash to get the sushi I wanted, and made do with what I had at home. In this way, intuitive eating is like dieting: Neither of them will fix everything in your life.

And as for the health question, there is no conflict between healthy eating and intuitive eating. Quite the contrary, intuitive eating makes you a deeply mindful eater. It teaches you to listen to your hunger and fullness cues, and to pay attention while you eat (to your food and body, not your phone).

But will it “fix” your body? This is the third, sometimes unspoken, question that I get about intuitive eating. Will it make me thin, at last? No easy answers here, I’m afraid. Letting go of that question is one of the most important (and really tough) principles of intuitive eating. It’s what the authors call “body respect,” and it’s exactly what it sounds like: No more self-loathing. Your body is not some hateful thing, and food is not a weapon you use to punish it or whip it into some specific shape. That said, some people’s bodies do change when they do intuitive eating. Mine did. (Still is! Bodies change!).

Then again, my whole life changed. My eating and exercise habits changed, my relationships changed, my career changed big time. I went from living in constant pursuit of thinness to actually living. I stopped thinking about things I’d do when I was thin: the trips I wanted to take, the parties I wanted to host — even the wedding I’d never really let myself consider before. My life was suddenly full as I began to do everything I’d been holding off on, waiting until my body was acceptable. When I made the decision to embrace it as is, the whole world opened up. Anything that changed in my appearance was a side-effect — small potatoes, compared to the rest.

Body acceptance is not “giving up on yourself.” And eating without restriction is not mindless, wild bingeing. It’s the opposite. I thought of that this morning, standing in my quiet kitchen, eating cake before dawn. Had someone walked in and seen me, I suppose they might have thought I was “being bad.” But oh well, I knew better. I knew my sleep-deprived body was reaching for a quick hit of sugary energy. I’d given it some soft boiled eggs first, knowing that it needed protein, too. I knew as well that this was my favorite cake in the whole world, and that was as good a reason as any to have some.

Then I turned back to my plate. I wanted to enjoy every bite. 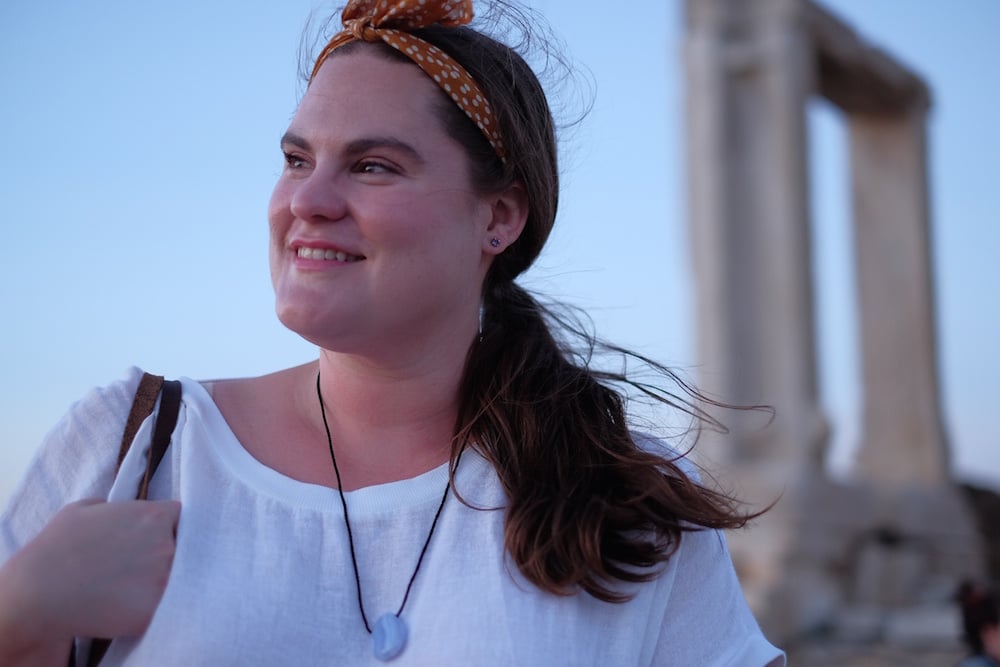 Kelsey Miller is an author, speaker, freelance writer, and creator of The Anti-Diet Project. Her second book, I’ll Be There for You, came out this fall. Here’s her week of outfits, as well.

P.S. Seeing my body with new eyes, and wise words to remember.