This Cozy Copenhagen Home Is a Book Lover’s Paradise 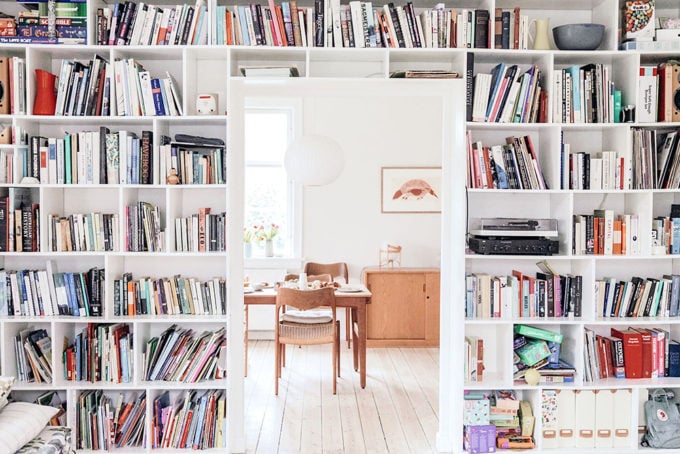 Postdoctoral researcher Miriam McKenna lives with her husband, Morten, and their two kids on a small island in Copenhagen. “We’re a 15-minute bike ride from the beach, and weirdly close to the airport,” she laughs. “Our kids are total plane spotters.” Here Miriam shares the importance of indirect lighting, her argument for daybeds and how to make any space feel cozy… 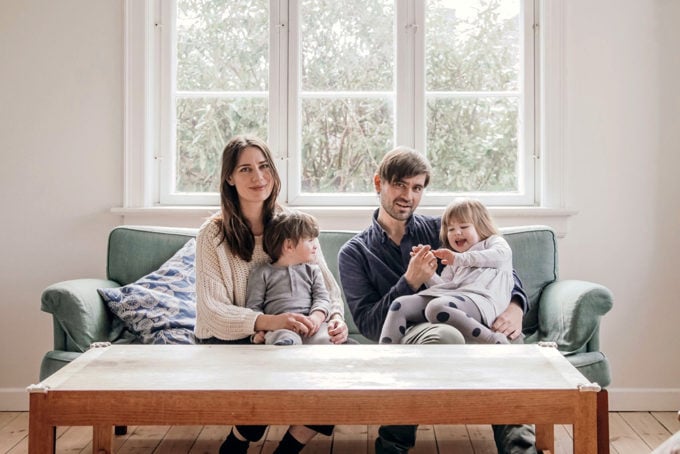 On family names: My husband took my last name when we got married. It was important for me to have a shared family name, but I wasn’t sure about taking his name. So, we were in this conundrum. We thought, ‘Okay, let’s hyphenate,’ but our names were funny hyphenated. Now we’re the McKennas. I’m proud of my last name. McKenna is a rare name — just eight of us in all of Denmark, and I produced two — or technically three — of them. As an Australian living in Denmark, I like that our names stand out. 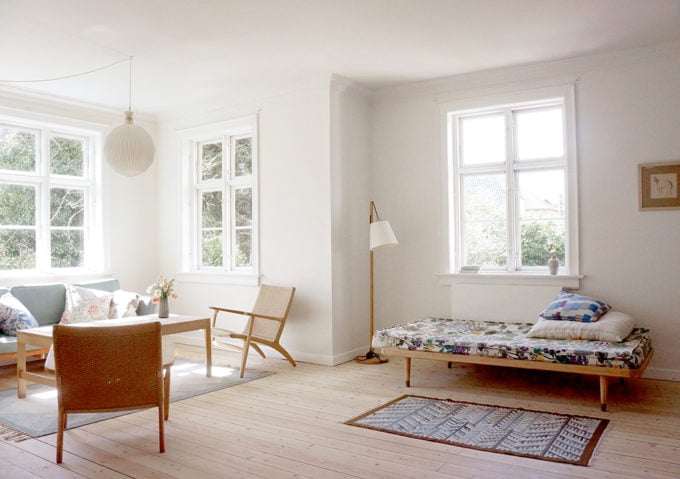 On pick-me-up lighting: When I moved here from Australia, I struggled with the long winters. But after a couple years, I realized that embracing it was the only way to survive six months of dark and cold. Lighting is a huge part of a Scandinavian home. Here, there isn’t usually much overhead lighting. Instead, lamps are dispersed through the room, so the feeling is much softer. Corner lighting is big. Plus, of course, lots of candles. 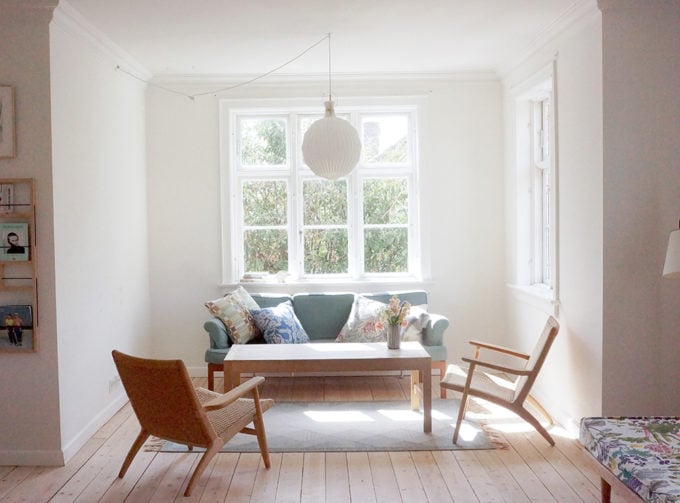 On arranging furniture: The sofa is a centerpiece of any Danish home. Ironically, ours is super uncomfortable. It’s a vintage Josef Frank one that I found online for a steal, but it’s stuffed with horse hair. You get a numb butt after an hour. I guess it’s good because it prevents me from falling into a Netflix black hole. I’m like, ‘Can’t feel my butt, time to turn off the TV!’ 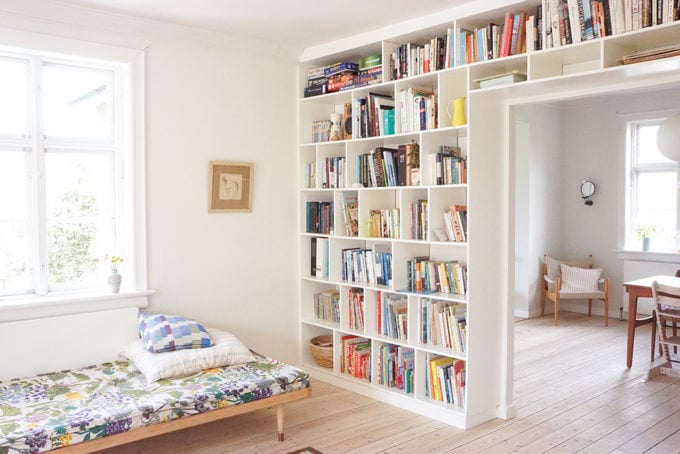 On the pleasures of daybeds: When I was pregnant with my second, I had a hard time sleeping in our hot bedroom, so I put a mattress in the living room. It was a revelation. I thought, how can I make this legitimate furniture? So, I brought fabric from Svenskt Tenn , made a cover and then found a daybed base. I was like, ‘There you go, a bed in the living room.’ 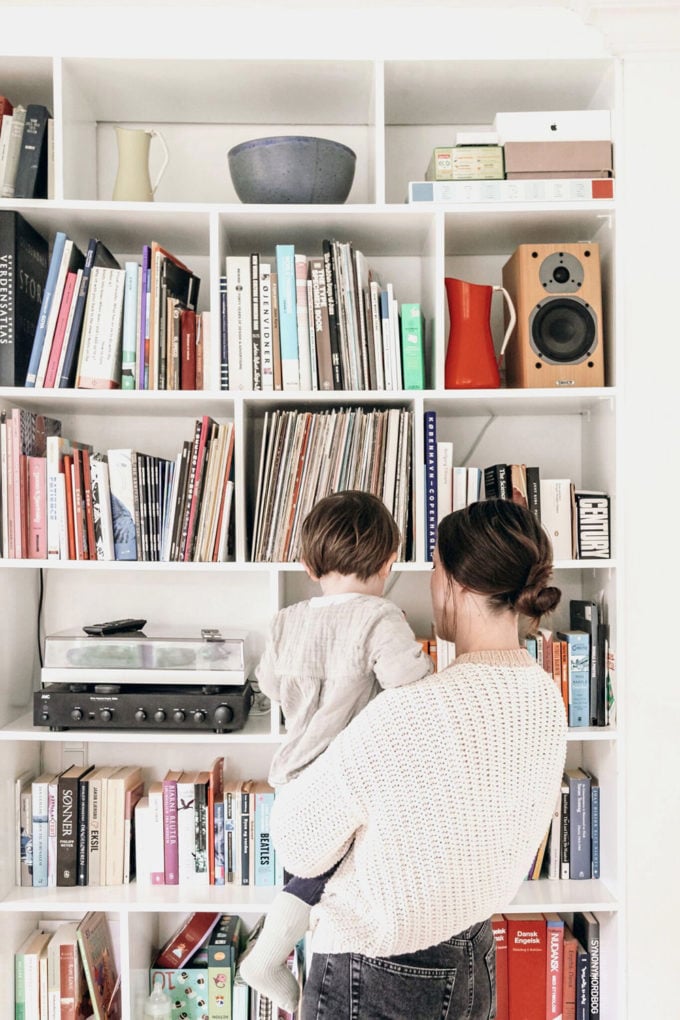 On making the first move: My husband and I met at a design awards show. As an art director, he was there for a legitimate reason. I was there for the free alcohol. We were flirting, but he seemed a little reserved, so I took charge of the situation. I asked him out, and we went bowling and ate Chinese food. That’s how you gotta do it!

On language mix-ups: One of the biggest differences between my husband and me is the way we use humor. Australians can have a dark sense of humor, and so do the Danes, but we have a way of giving people a bit of a hard time. My family teases my husband constantly. He takes it personally, and I have to say, ‘No, that’s just how we do it if we like you!’ And we use SO. MUCH. SLANG. When I’m with my friends and family, we get into a mode of speaking that’s incomprehensible to anyone else. We cannot say a word in full — avocado is ‘avo,’ sandwich is ‘sanga.’ And our kids speak a strange hybrid language of Danish and English. I don’t really understand what they’re saying, and my husband doesn’t really understand what I’m saying. We’re all just talking. 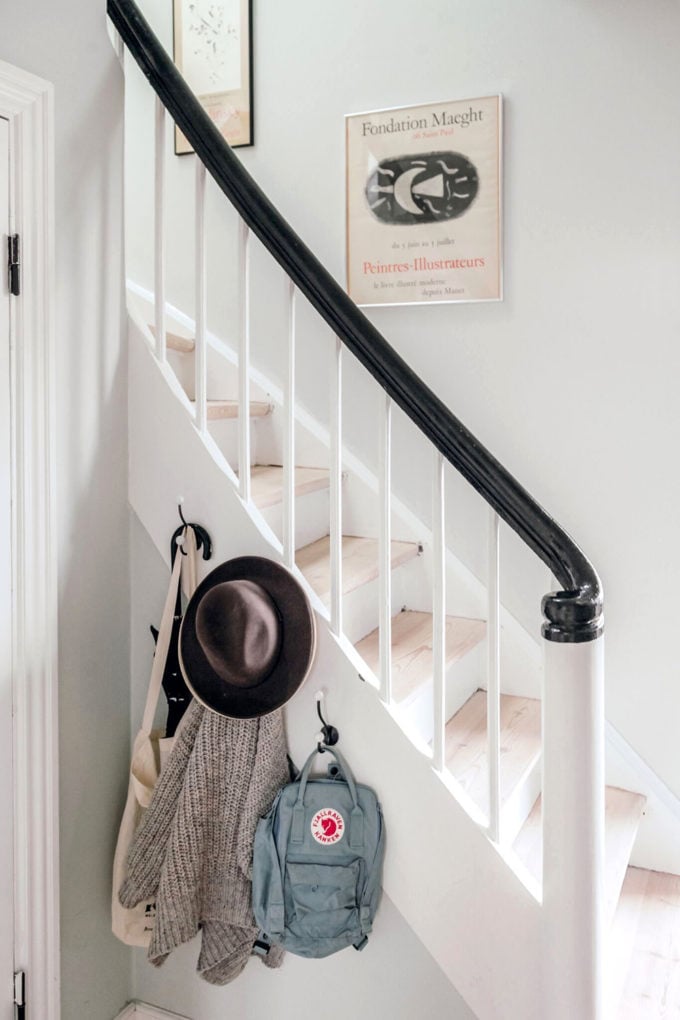 On kids’ backpacks: Every little kid has these Fjallraven backpacks — if you don’t wear them, they might revoke your citizenship. Babies basically come out wearing them. I especially love the mini size. 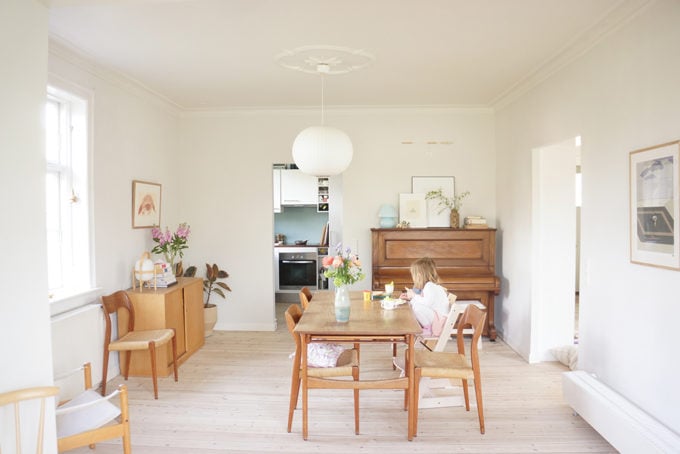 On bare windows: Much to my mother’s chagrin, we have no curtains or drapes. It’s a Scandinavian thing, and it helps let in the light year round. We have an overgrown garden, so most of our house is shaded from the street, but people can look directly into our kitchen, which I kind of like. It makes me feel like part of the neighborhood. 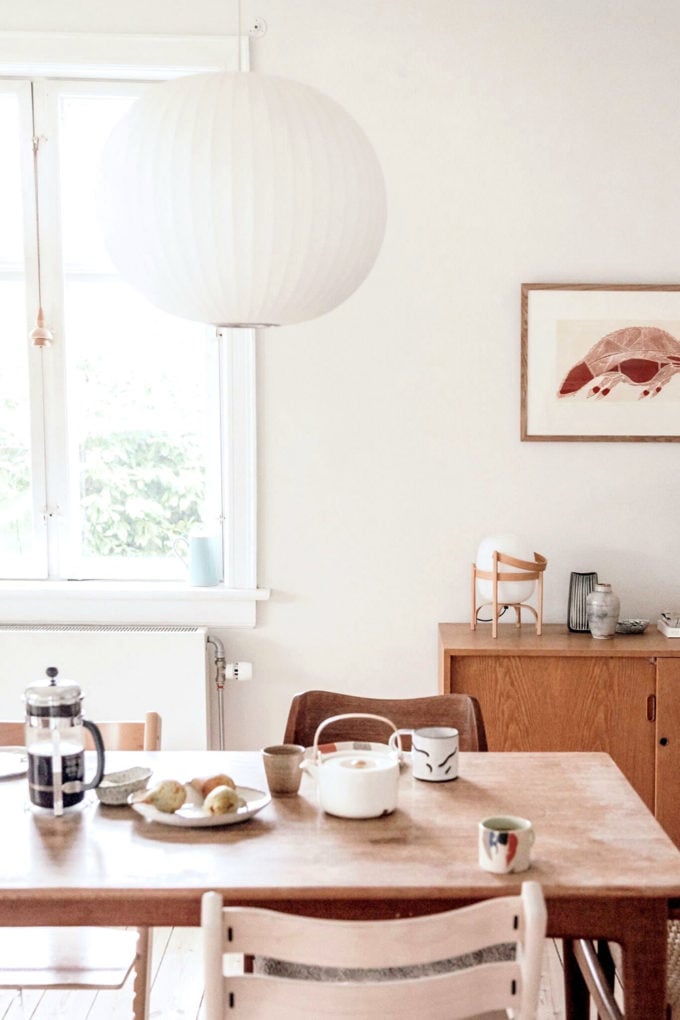 On cooking for guests: We love having friends over now and again and cooking lots of food. I once had a pie-themed party, so I made galettes and quiche for the appetizers, and then a chicken pot pie for the main course, and then pecan pie for dessert. You have to be committed to the amount of butter and pastry you’re going to consume. 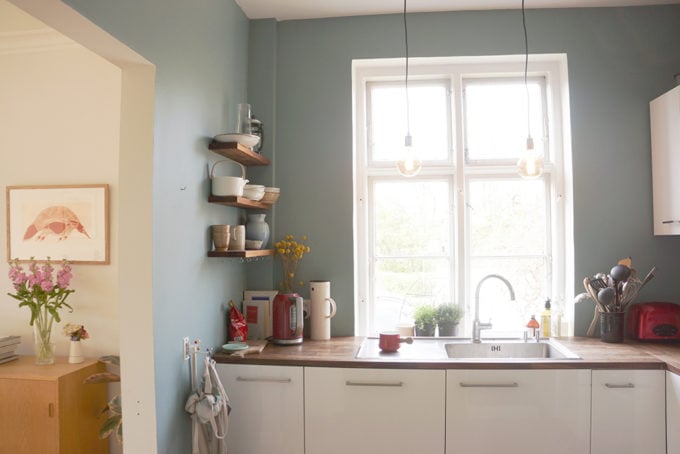 On blue paint: I saw a French stylist’s home on Pinterest in this paint shade, and I was like, that’s our kitchen color! It’s a small space, so our friends were trying to dissuade us from doing it, but as soon as we painted, we thought it looked very cool. And this sounds unsexy, but the color hides grease stains. The hue changes throughout the day — in the mornings, it’s bright but then it looks grayer later. It’s a really, really nice color. 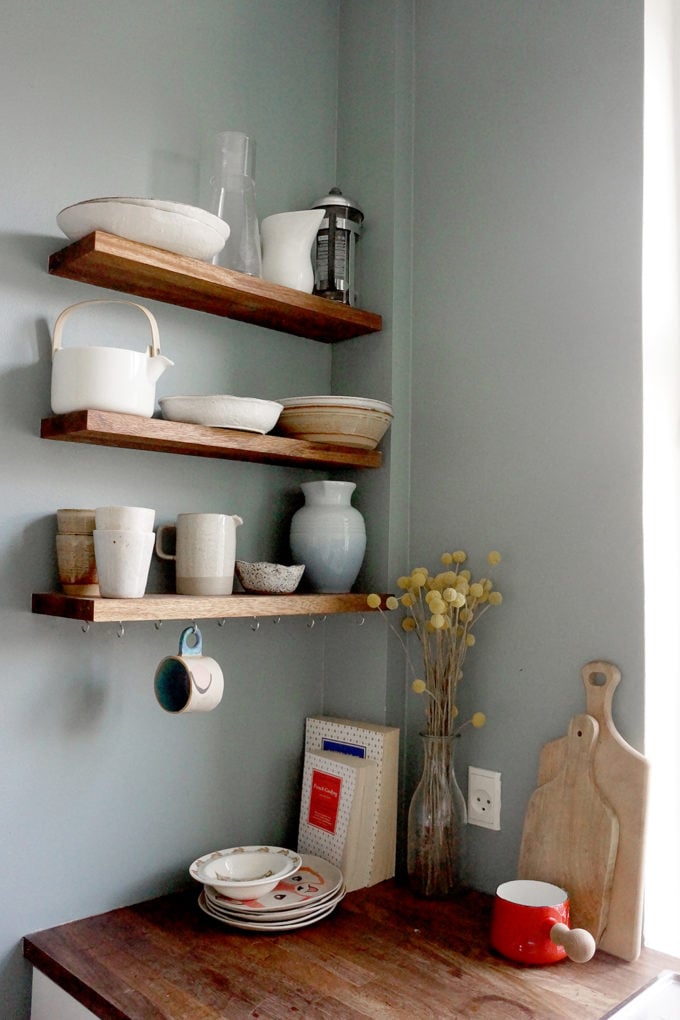 On open shelving: My husband calls these shelves ‘dust collectors,’ but it’s nice to show off our stoneware pottery. The style is popular in both Australia and Denmark, so I like that it’s two traditions combined. 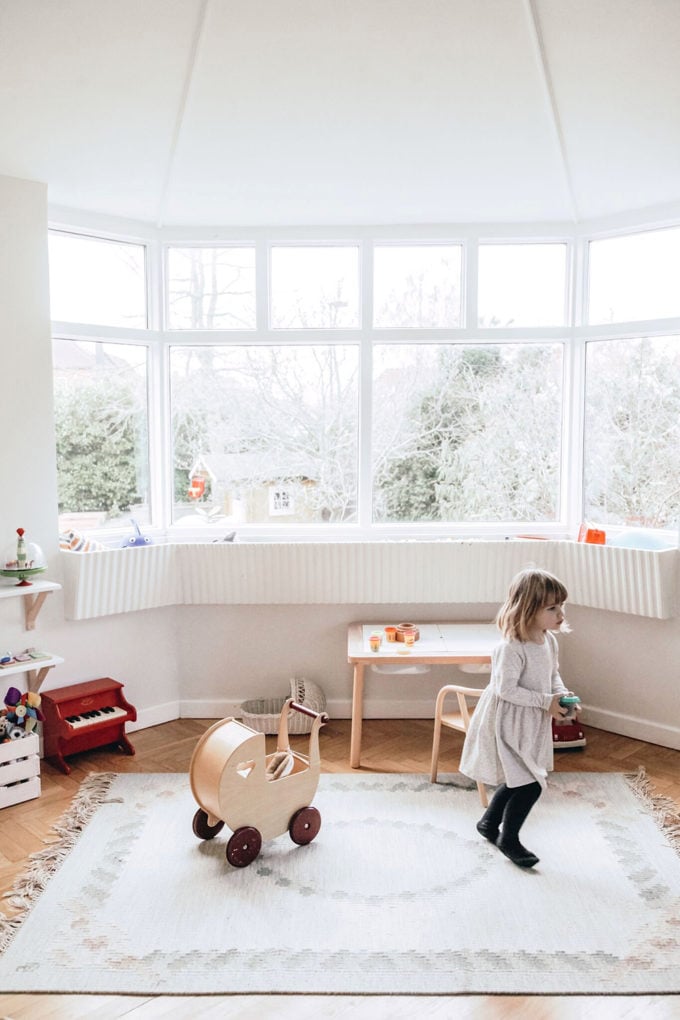 On household friendships: Abi and Eli are total little buddies. It was touch and go there for a while, since they’re only 15 months apart. And the jealousy phase hit when Abi turned two. But now they go to the same daycare, and they have a good time. Their go-to game at the moment is just running in circles through the house. 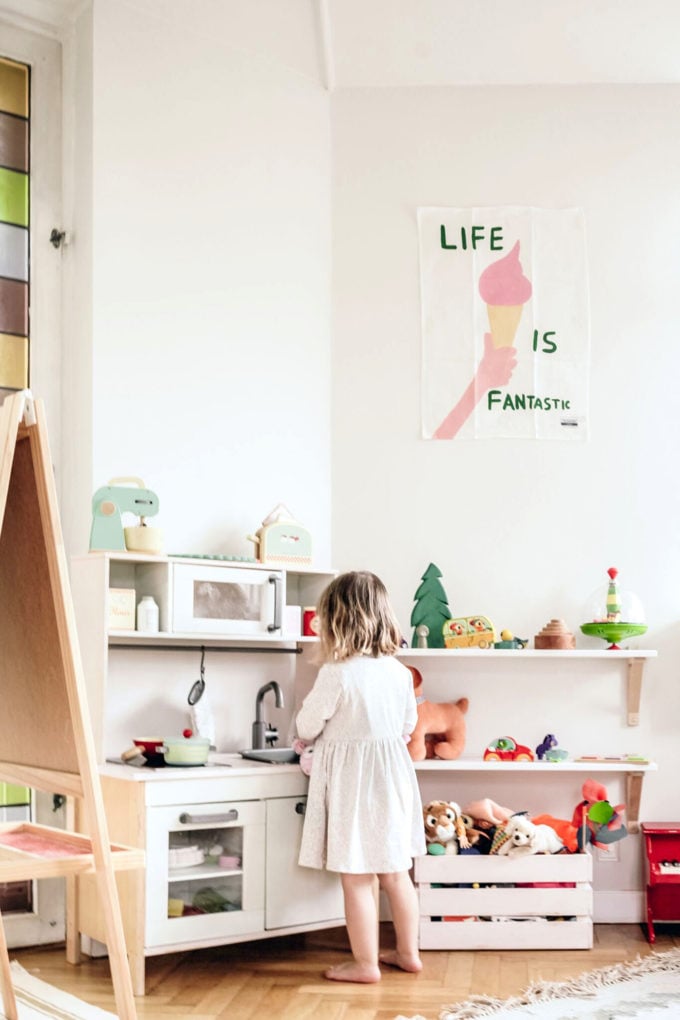 On controlling chaos: The playroom off the dining room is my favorite part of the house. I love the big window and parquet floors. The kids can make a mess there. If stuff creeps out, I just sweep the lego bricks back into the playroom. It’s the designated Crap Area. 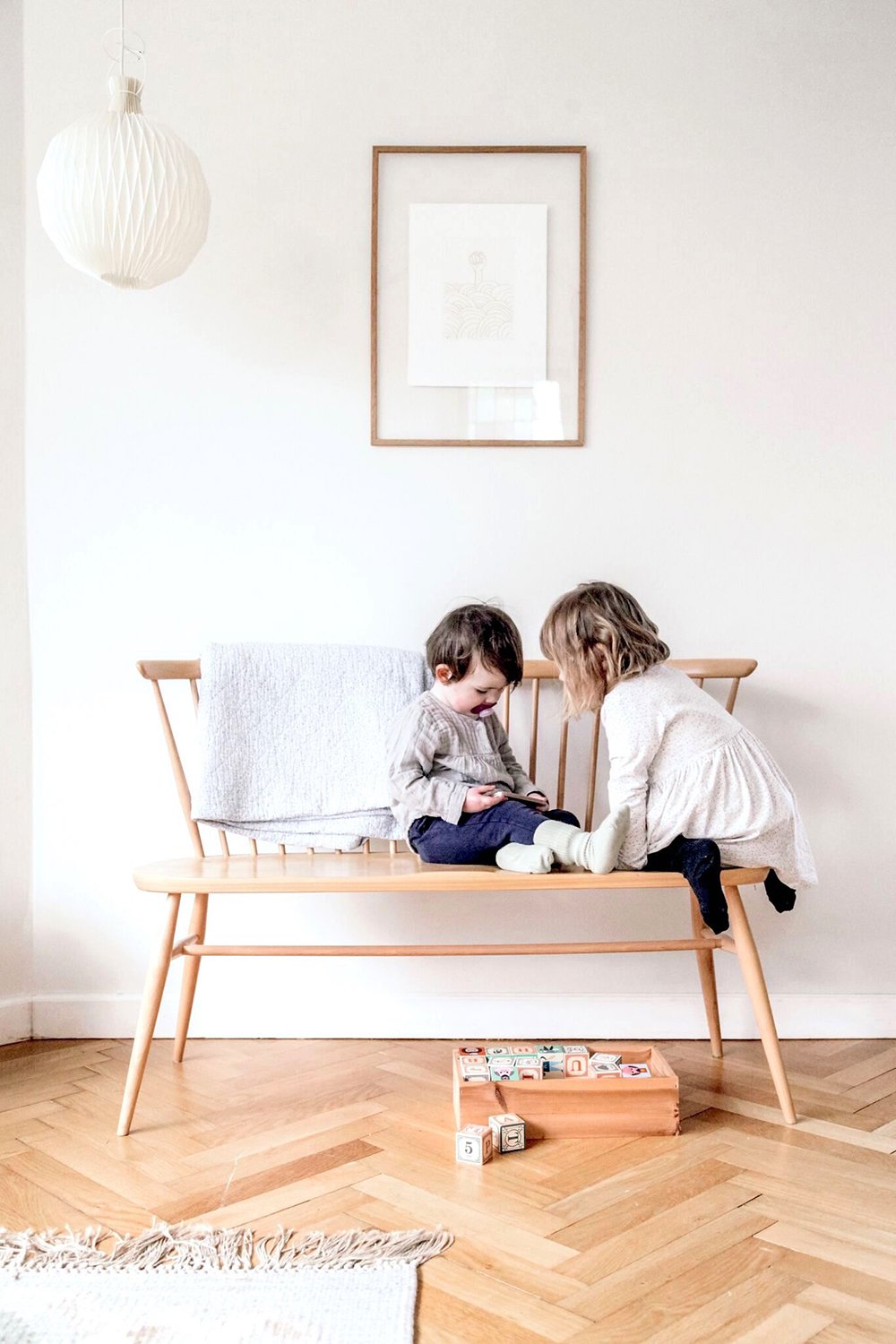 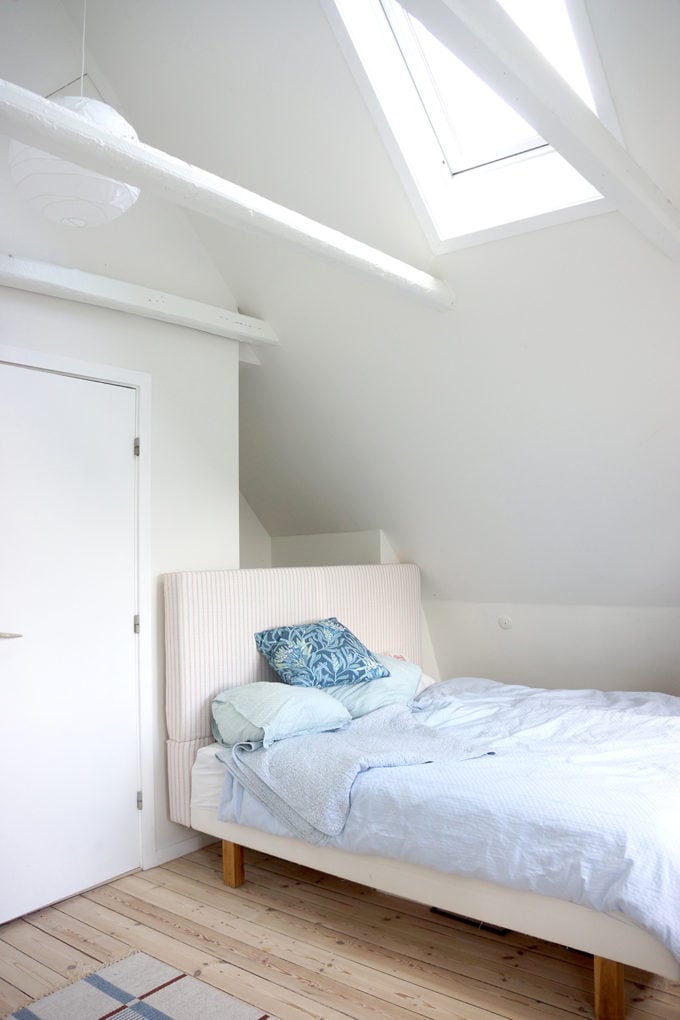 On natural light: We have skylights in the bedrooms. They make make the rooms feel much brighter and bigger. Surprisingly, the light doesn’t wake us up. I was nervous in the beginning, but I sleep through it, I’m that tired. 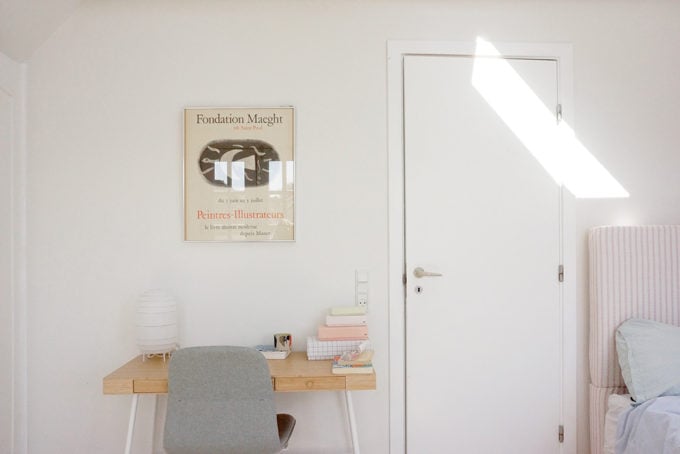 On balancing life and work: This is our little desk. I’m a postdoctoral researcher, and I focus on the theory and history of international law. I actually work at a university in Sweden. My commute is a 45-minute drive, and I have to bring my passport every day when I cross the bridge. I listen to a lot of podcasts — I’m going through the archives of Strangers, which I’m completely in love with. 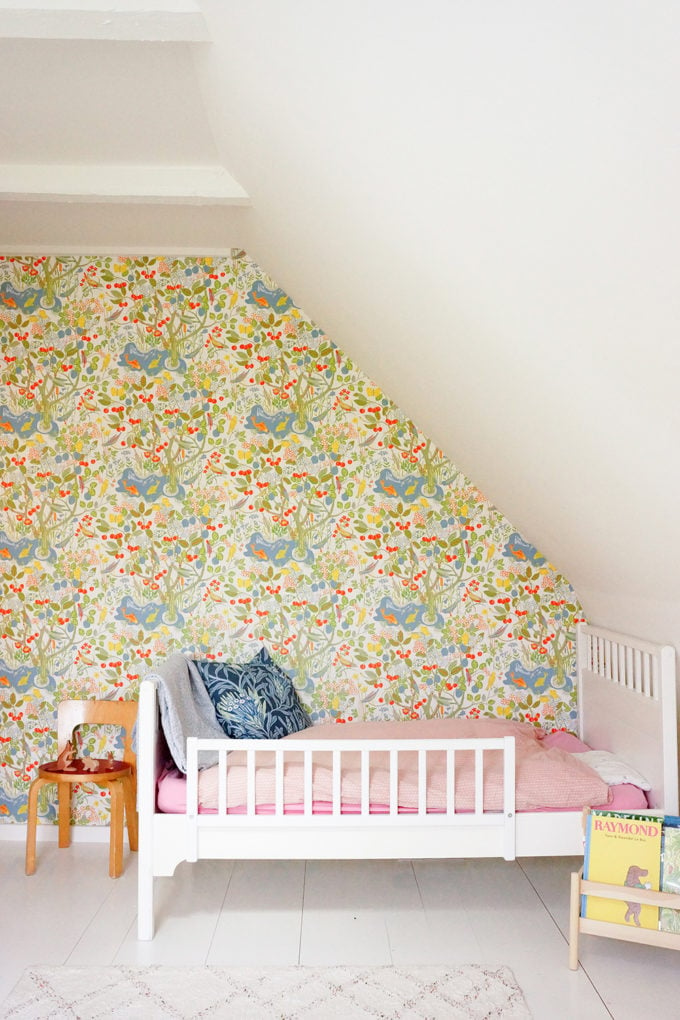 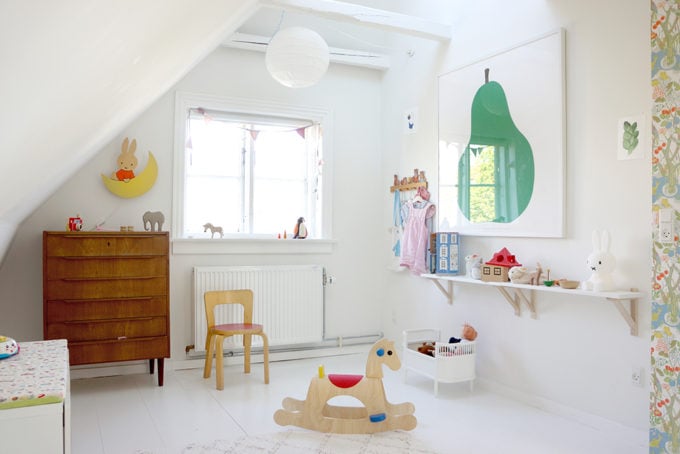 On wallpaper: When I saw this goldfish wallpaper in a café in Sweden, it was love at first sight. As soon as we bought the house, I ordered it. It’s so nice and cheerful but not overly childish. 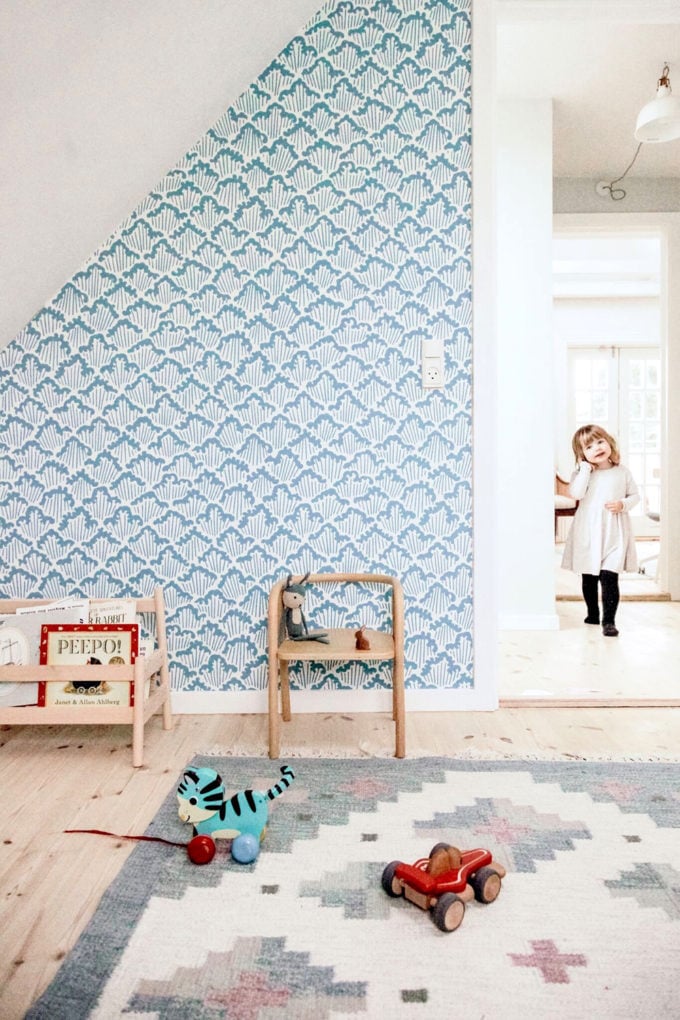 On choosing color schemes: I didn’t mean to make the dominant color of Eli’s room blue, but it became it. Dammit, gender norms! Creeping in again. A least I’ve managed to keep pink at bay in Abi’s room. 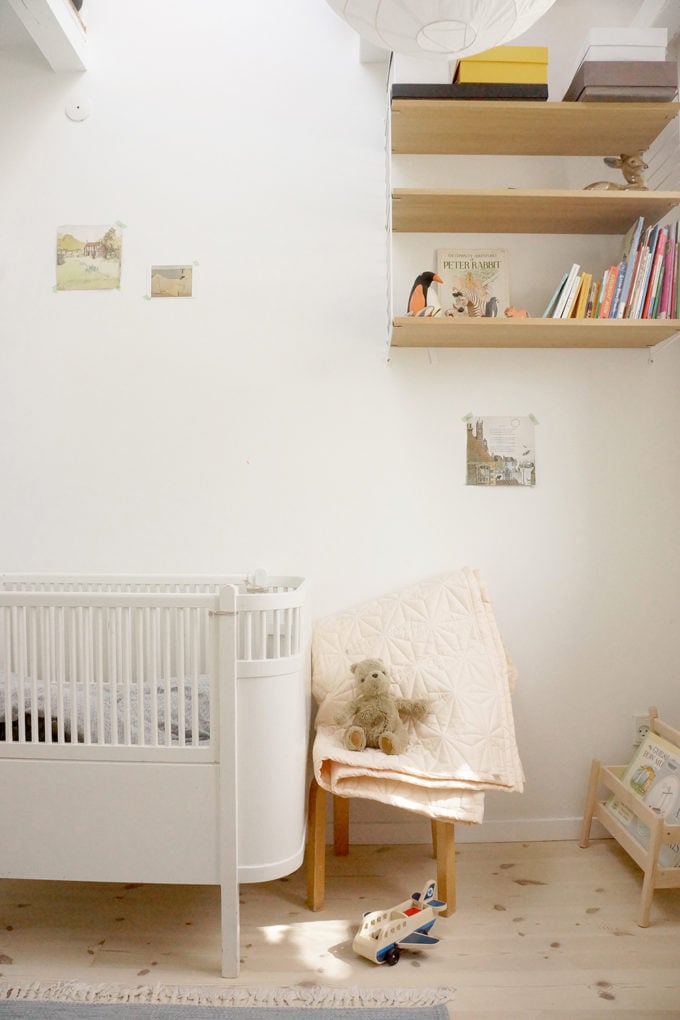 On great children’s books: I hope Abi and Eli will love books, so I thought it made sense to have as many within their reach as possible. When I found out I was pregnant, the first thing I started buying were copies of my beloved childhood books. We read a lot of William Steig. And Julia Donaldson. They’re really into her. 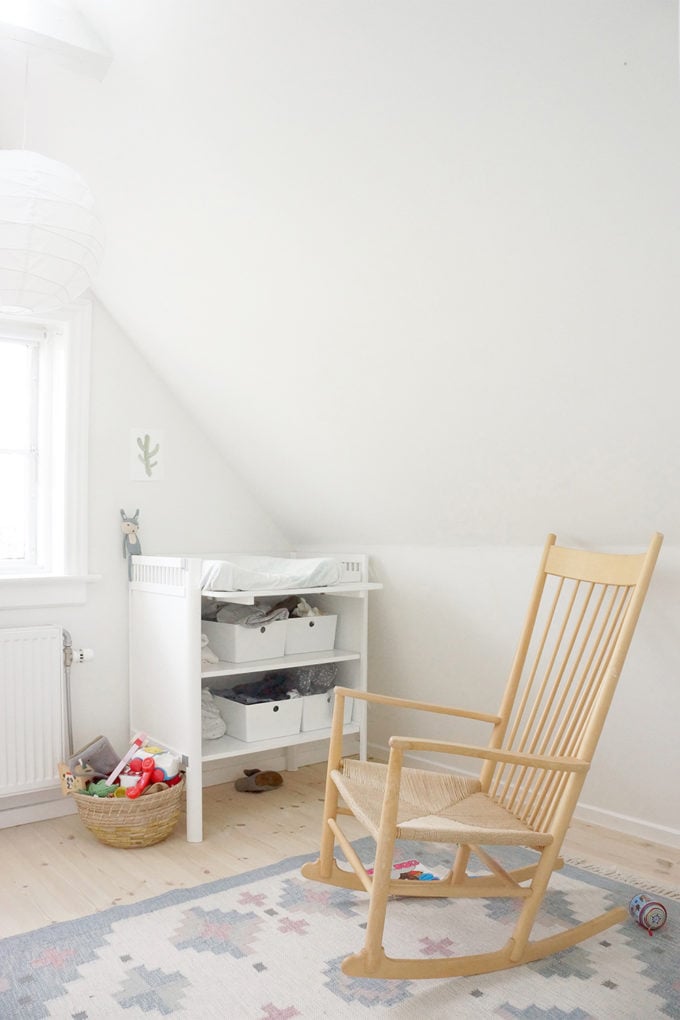 On books for mothers: I read a lot of non-fiction for work, but I just finished The Mothers and After Birth. I recommend them to all my friends who are having kids and having a hard time. I had problems with postpartum depression, and when you read it in novel form, you’re like, ‘Oh my gosh, I’m not alone.’ I also love Rebecca Solnit — all of her books. 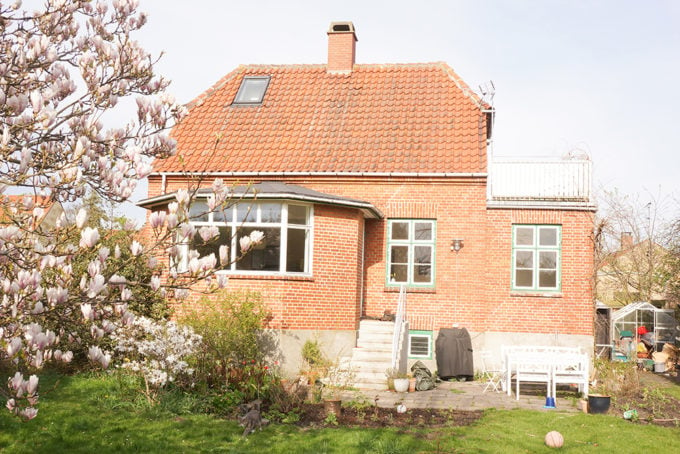 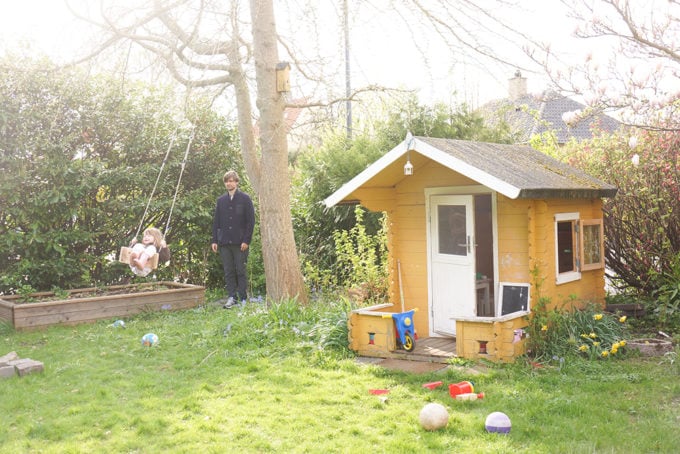 On family adventures: We go for trips to the beach and the farm up the road with goats, sheep, horses and cows. We have a cargo bike. It took two weeks to get used to, you have to turn with your arms versus your body. For a while there, I was like, ‘We’re all going to die, it’s all over. In the slowest possible way, we’re all going to die.’ Thankfully, now I can do it! Denmark is beautiful, I really love it here. 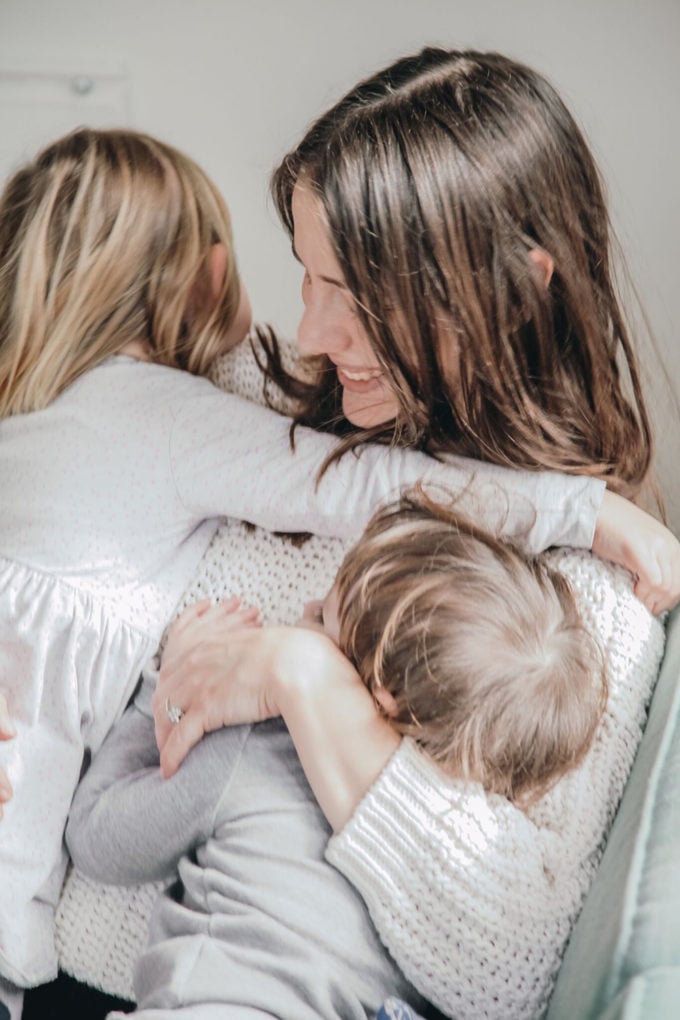 Thank you so much, Miriam!

P.S. More house tours, including an airy loft in Toronto and a house in the Japanese countryside.

(Photos by Freya McOmish and Miriam.)