These Two Sisters Live Together in a Color Explosion 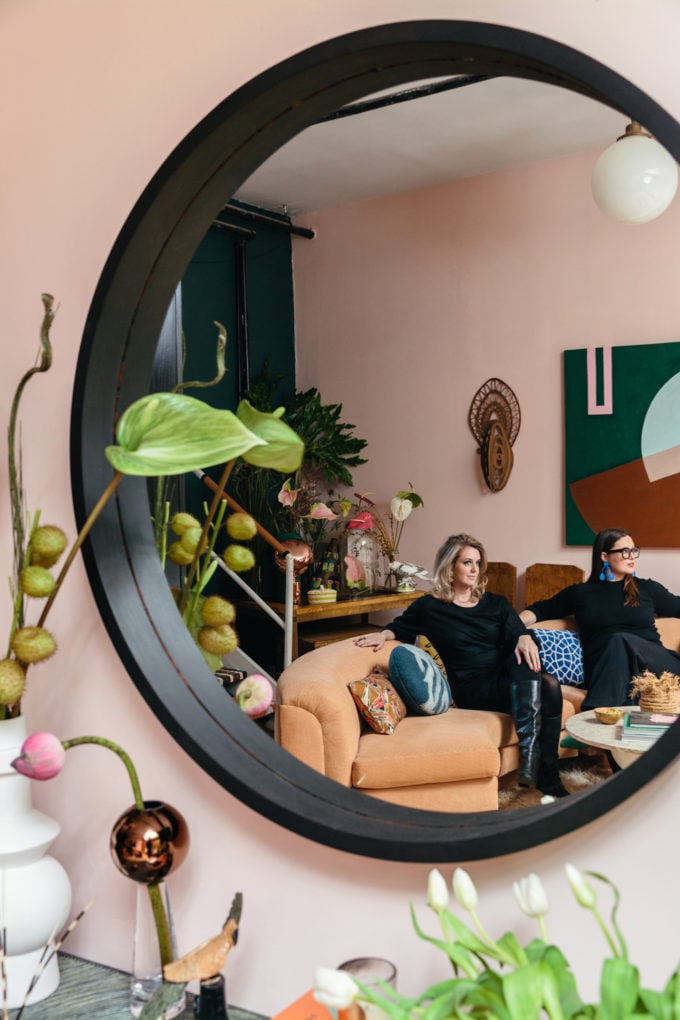 After growing up in Kansas City, designer sisters Hollister and Porter Hovey moved together to a loft in Williamsburg, Brooklyn. Thirteen years later, their apartment has become a pink oasis filled with fuzzy rugs and Ikea pieces they swear by. “Life is hard,” says Porter. “You want your home to be a sanctuary, where you feel the most comfortable.” Take a peek inside… 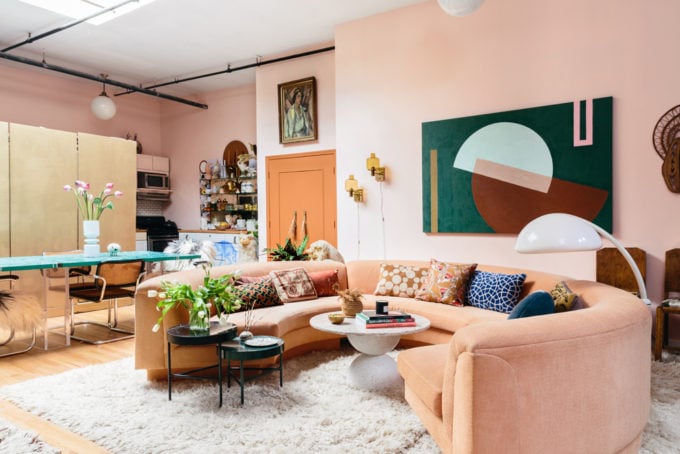 How did you decide on pink paint?
Hollister: When we first moved in, we painted all the walls black, then baby blue, then white. The black wasn’t depressing, though; it was like living in a Dutch painting, where all the art and even our faces popped off the wall.
Porter: We talked about going pink for years, but since the walls are so high, it’s always such an effort to paint. It mimics our roles in life — Hollister will start painting and be really excited about this great project, and then she’ll get bored, and I’ll have to finish it. It was the same with Christmas cookies when we were little. Hollister would bake one tray of beautiful cookies — and we were left with mounds of dough afterward. Our dad was like, there are 500 more trays to do.
Hollister: But we did it! This pink is warm and makes your skin glow-y. It’s nice to feel pretty against a wall. 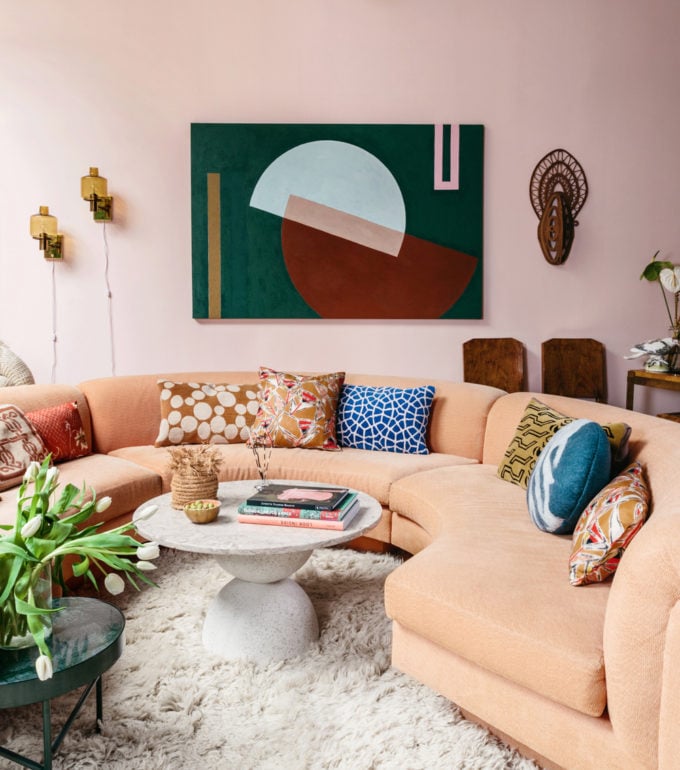 Tell us about this huge sofa!
Hollister: When people come over, they talk about the sofa right away. We got it at an online auction for $600. LiveAuctioneers brings together tons of regional auction houses, not just Sotheby’s and Christie’s, which no one can afford. You can do all the auctions online — even from your phone. 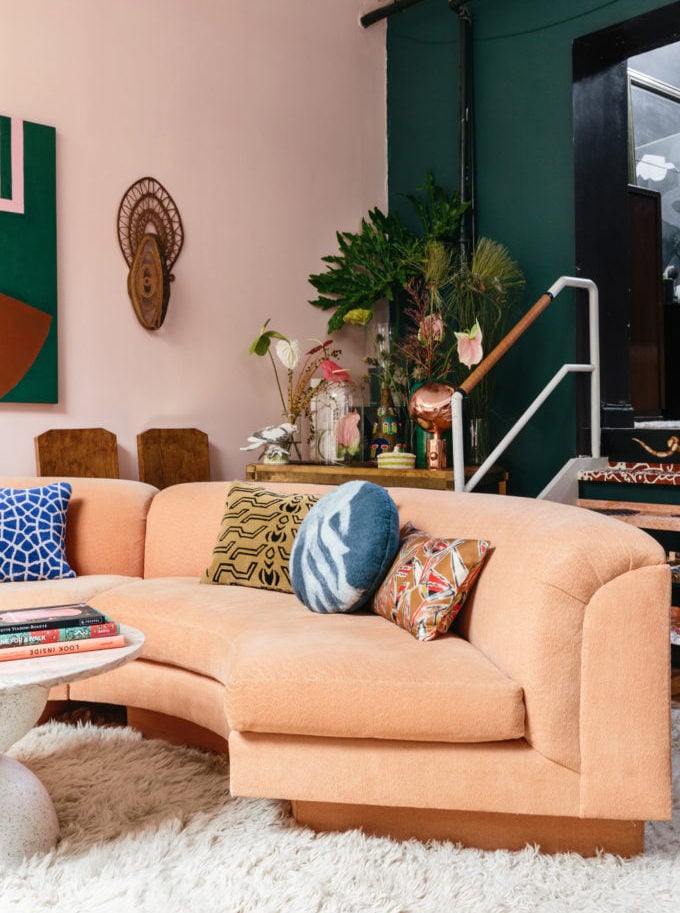 How do you spend a typical evening?
Porter: We watch a lot of TV.
Hollister: It’s the golden age of TV.
Porter: Our work is super stressful, and we’re always on an adrenaline high.
Hollister: When we’re exhausted, we’ll watch Outlander, Homeland, SVU or Criminal Minds on a projector that we hide in an armoire.
Porter: For some reason, procedural shows calm us down. It’s odd to say but with a murder you know what’s going to happen. 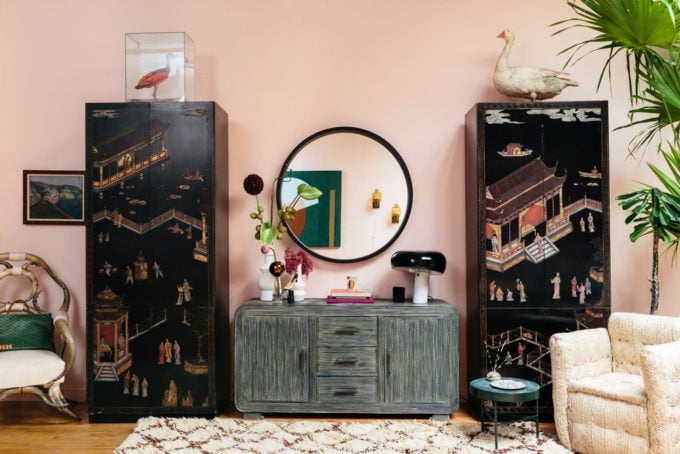 You run an apartment staging company. What exactly does that mean?
Hollister: We decorate empty houses really quickly to help the sellers maximize the value for a sale. We want to help buyers picture the space as their own the moment they step inside. We like to say, hey, even the most stunning actresses put on the best dresses for the Oscars. It always helps to dress up an apartment a bit for its big day, too.
Porter: It’s fast work. We’re turning these apartments around in two to three days, including all the design, moving and logistics.
Hollister: We always mix Ikea furniture with beautiful antiques. And every time someone has wanted to buy stuff from us, it’s the Ikea pieces!

How did you get into staging?
Hollister: We had many other jobs first. I worked in business journalism and then medical device PR. Porter was an events photographer, assistant and real estate agent.
Porter: Then we got a vintage Danish modern couch, and I was like, we can start a staging business! I think being blind and naive about it was actually to our advantage. 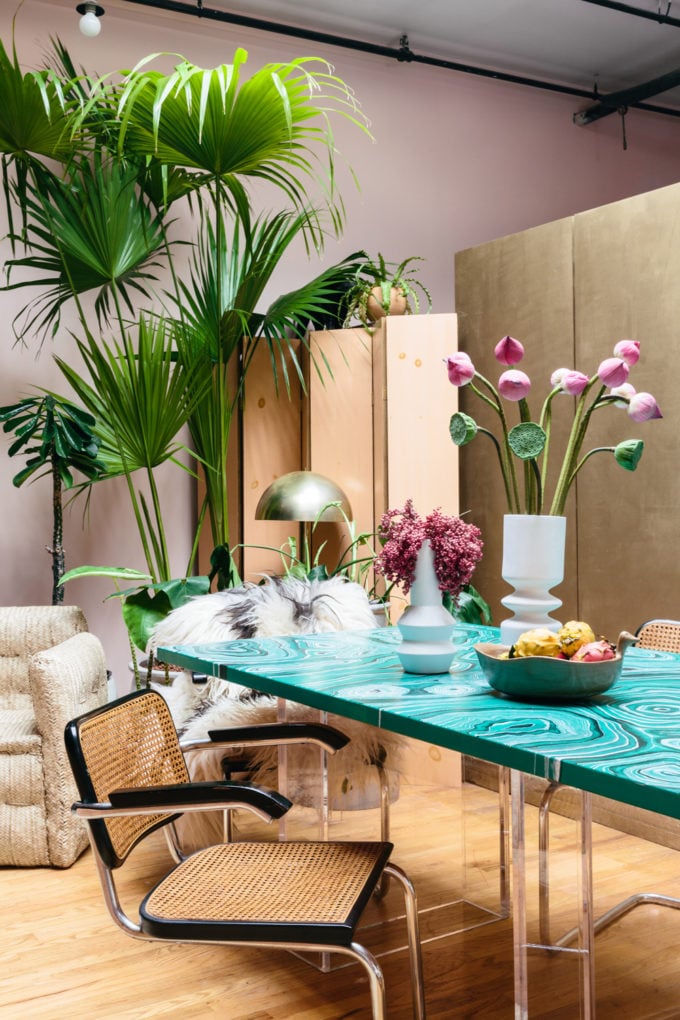 How do you choose indoor plants?
Porter: Any greenery will make such a difference. When we’re staging, a space never feels done until you bring in the plants. Then you walk in and go, ahhh, I feel at home.
Hollister: A funny thing, though, is that for staging, the real estate agents don’t have time to water our plants, so we have to use fakes. But silk flowers have gotten good. The orchids on our table are actually fake!

Where did you find this gorgeous table?
Hollister: It’s just an Ikea butcher block! We got lucite legs made for it, which was more of a splurge than we expected. We could have definitely gone with thinner ones.
Porter: Live and learn.
Hollister: Then I painted the tabletop green and drew all the lines over it. It takes forever, but it’s not something that involves tons of talent. You just wet your brush and smear larger sections. Finally, you draw the bajillion little lines in black and white. 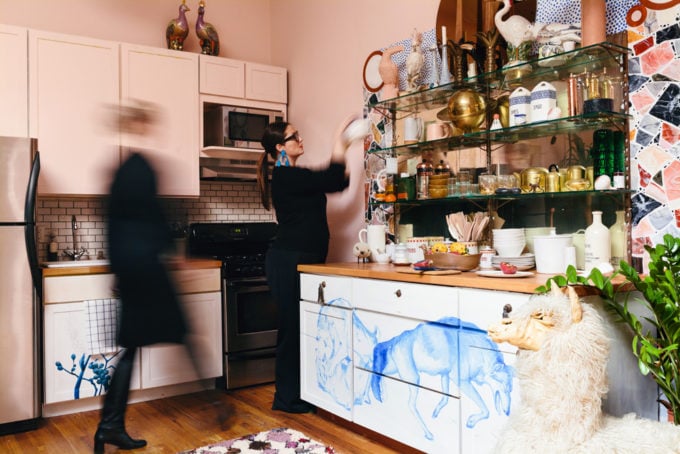 Wow! What about the wolves?
Hollister: I painted the lone wolf. It’s a copy of the artist Walton Ford. Then my friend Max Toth, who is a real artist with a gallery, came over and did the fighting wolves.
Porter: We can never ever paint over it. 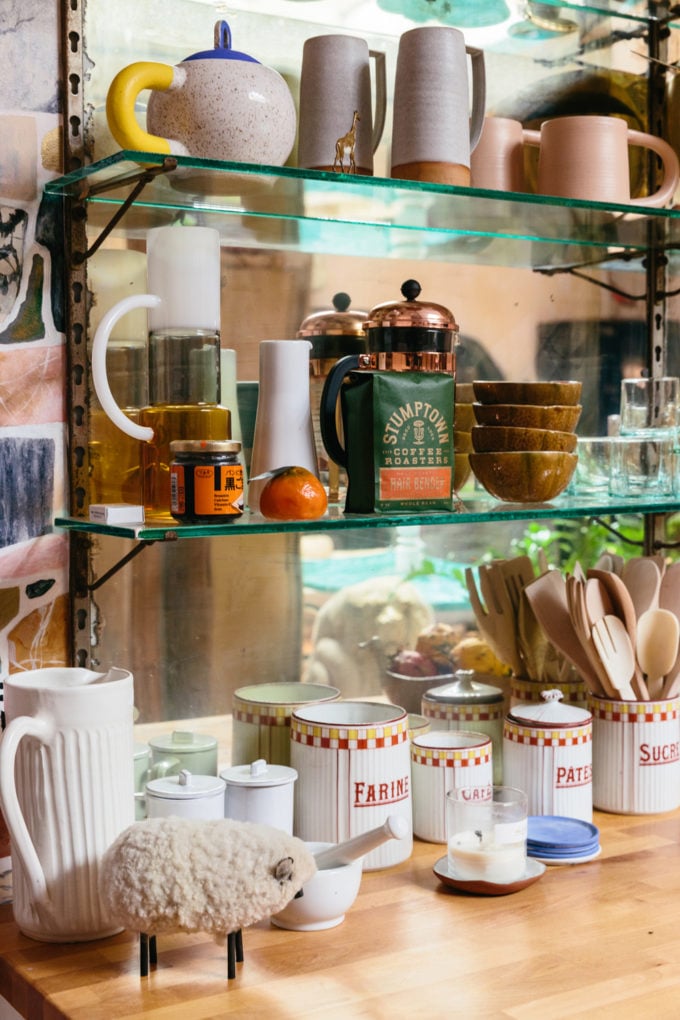 You guys throw such epic parties. Any must-dos?
Hollister: My best advice is to send out an email beforehand about the cast of characters. You only need to put one sentence — this woman is a cartoonist, this guy loves bocce. That way, everyone comes in knowing everybody else.
Porter: This will date us, but it was Hollister’s 25th birthday, and she had invited five boys from Friendster.
Hollister: I thought, it will take a long time to go on dates with all of them, so I’ll just invite them all to my party! Of course, when that happens, you end up with no one. I carried an hors d’oeuvres tray all night, while everyone else was making out. Everyone made out but Hollister. 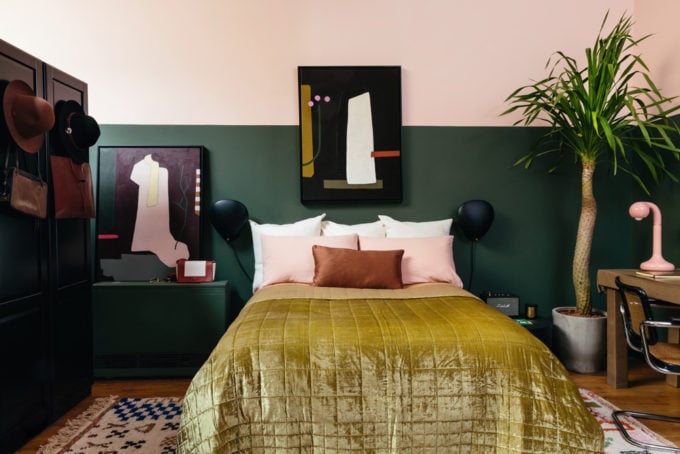 I love how you make your own artwork. Do you have tips for beginners?
Hollister: Truly, don’t be afraid to try it out. You can do squares, circles on a canvas… I’m not a painter, never was, but you can mess around.
Porter: People can get so nervous about art. But look at what’s in museums! I love abstract expressionism, and I know those artists were the first to do it, etc., but it’s random! You’re not trying to sell a museum piece anyway, you just need something nice for your house. You could frame linen and it will look pretty. 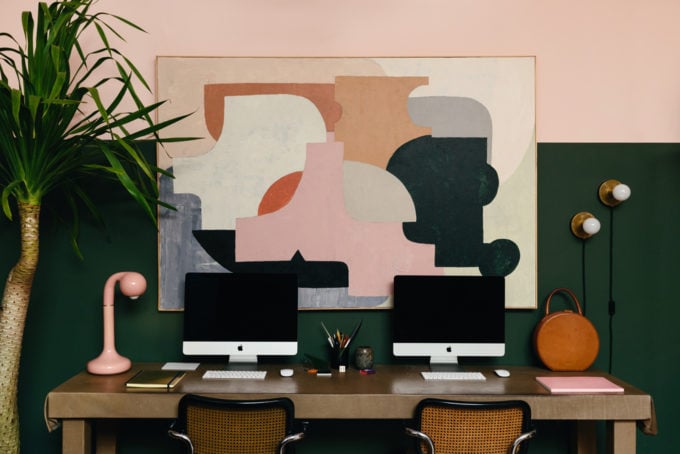 How would you define a comfy bedroom?
Hollister: We’re wildly low key with bedroom needs. In my old studio apartment, I had a twin bed until I was 25, and Porter spent the summers sleeping on my LOVE SEAT. She’s 5’11”. Linen duvet covers are great, though. The subtle scratchiness that eventually gives way to complete softness is wonderful. We get ours from Hawkins New York and SeaMe Linen. 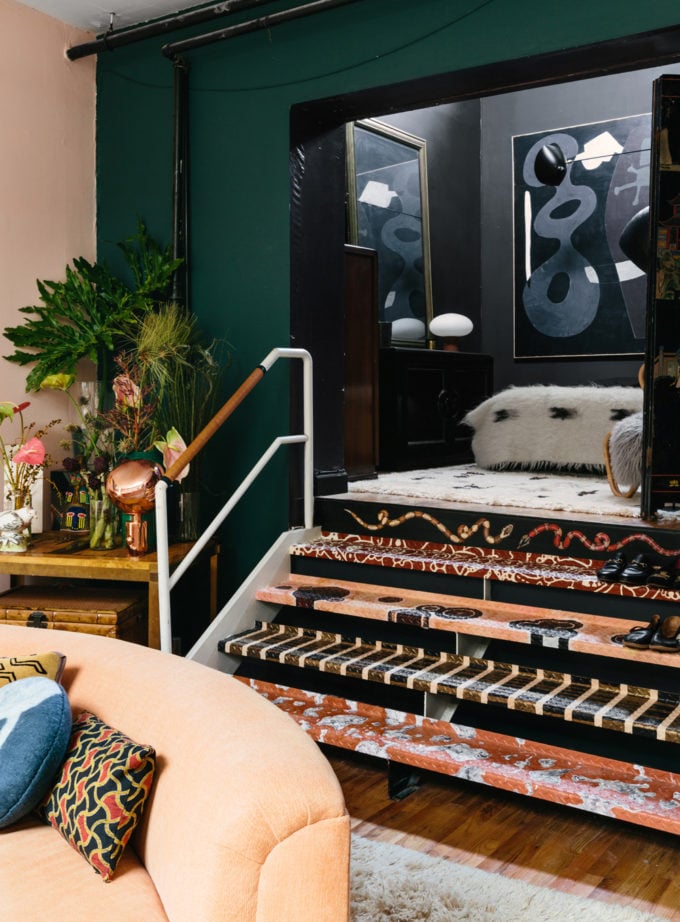 You guys found an amazing sofa, but do you have advice for people starting from scratch?
Hollister: Buy one statement piece. Usually, that’s a cool chair. Sofas are often practical and comfortable, but if you put one cool chair next to your boring sofa, it will all look amazing.
Porter: Ikea also makes nice sofas. They don’t steam the sofas in the showroom, but if you steam them, they look really good. 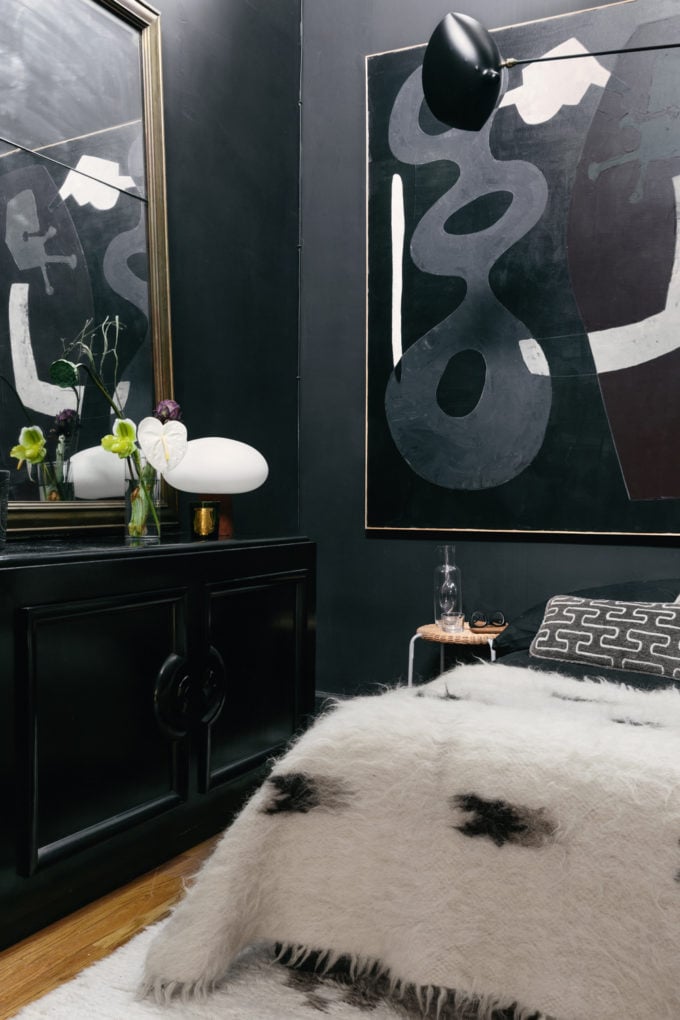 Be honest: Do you ever get on each other’s nerves?
Porter: Honestly, we’re usually in sync. It is pretty amazing that we work together, live together, hang out together and have a lot of the same friends.
Hollister: We’ll even independently order the same food at restaurants.
Porter: It’s so embarrassing.
Hollister: I’ll be like, I’ll have the chicken and brussels sprouts.
Porter: And I’ll say the same thing. 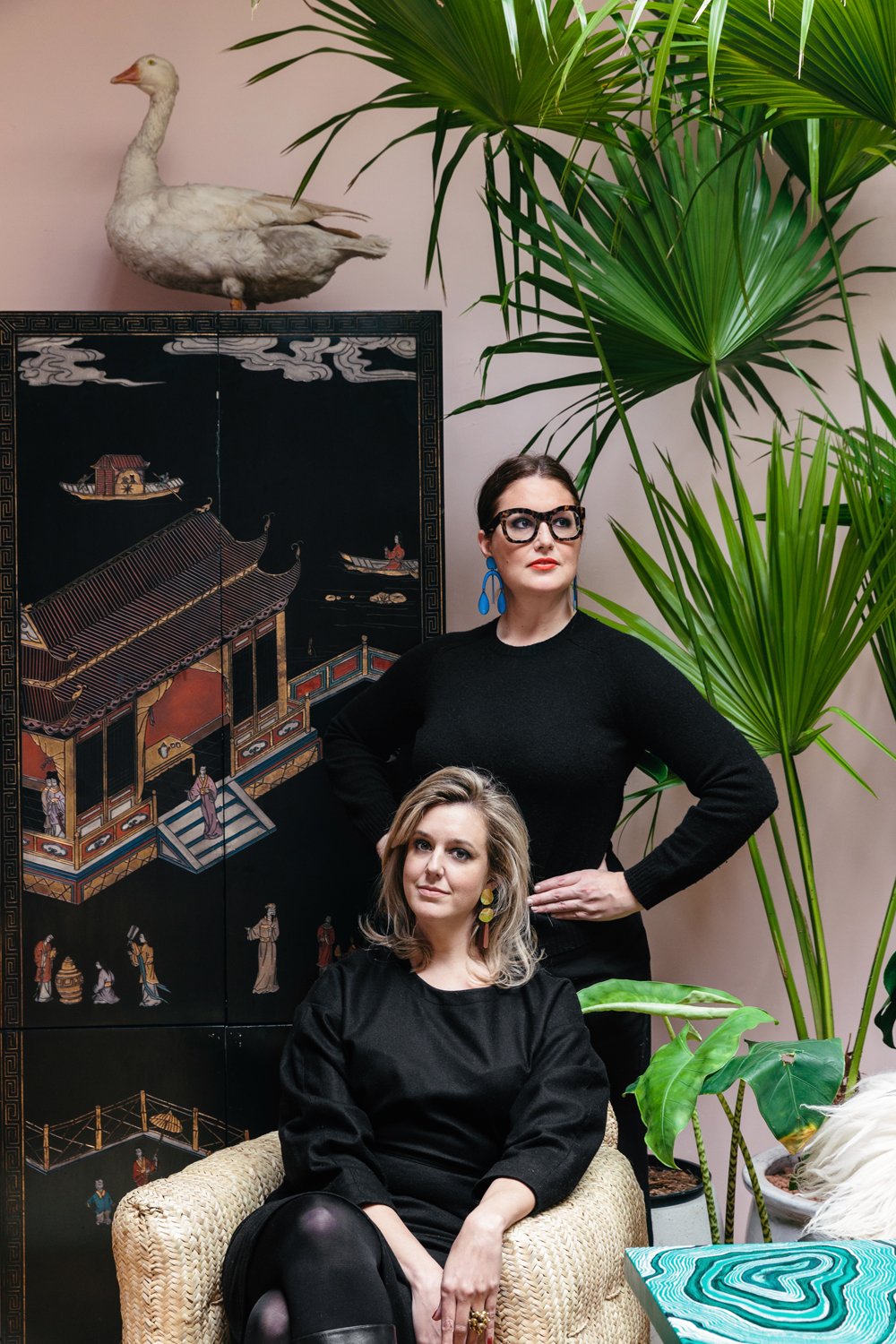 You’ve mentioned before that you were really inspired by your mom. What was she like?
Hollister: Our mom was just the coolest. She grew up in Nebraska and dreamed of working for a fashion magazine. After college, she landed a job as an editor at Mademoiselle. She met our dad in New York and they ended up moving back to the midwest. She pushed us to be strong women who didn’t conform. She died from colon cancer in 2002 when Porter was 19 and I was 23. She’d been sick for three years, but it was completely devastating. We still work to make her proud and think she’d be ecstatic that we’ve started our own company doing things she would’ve also loved.

How long do you think you’ll live here?
Hollister: Until they kick us out.

Thank you so much, Hollister and Porter!

By Joanna Goddard
Design
This Treehouse Apartment Is All Creaky Charm
October 16, 2018

117 COMMENTS
By Joanna Goddard
Design
Is This the Coziest Apartment in Chicago?
March 16, 2021