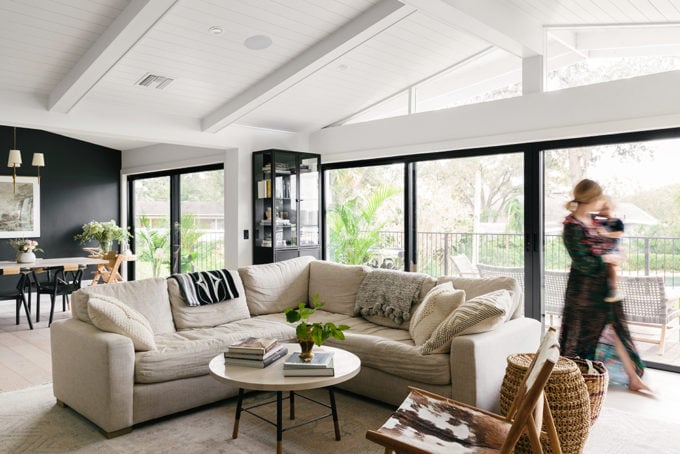 Anna Bond and her husband Nathan spend their days running Rifle Paper Co., the beloved stationery brand with more than 175 employees, so they want their home to feel like a haven. “Friends come over and say, ‘There’s no color!’” says Anna. “But we need a place that is totally serene.” Here’s a peek inside the house, which they share with their two-year-old son Ford (and a baby on the way!), in Winter Park, Florida… 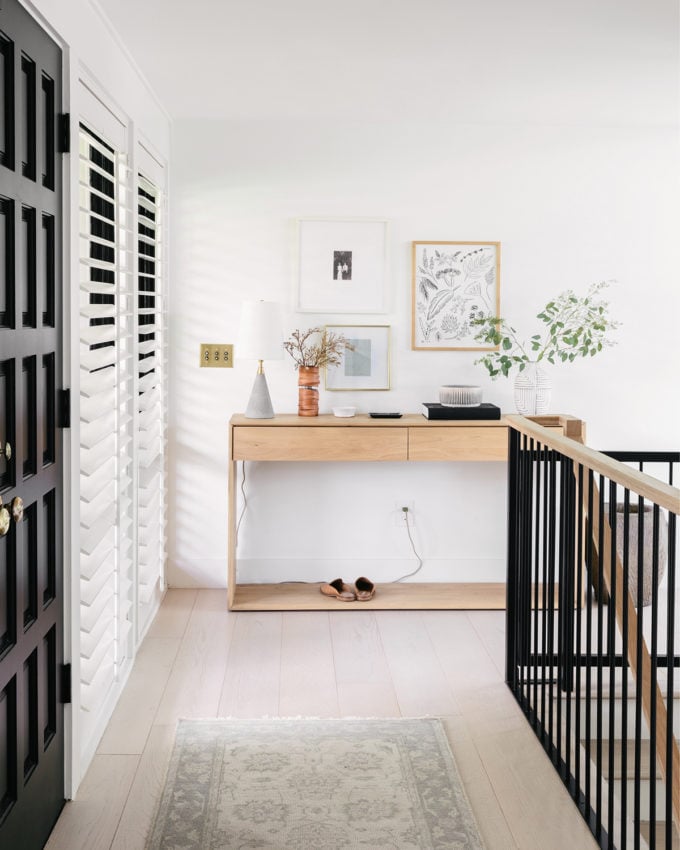 On tackling a big renovation: When we first saw the house, it looked really different. [Here are the ‘before’ photos.] Renovating a house was fascinating. There were so many little decisions. Our contractor asked, where do you want all the outlets? I was like, I don’t know! But I got into it. I was choosing handles for the shower doors on a Friday night with wine. The other surprise is that I thought it would take two months, but it took a year. 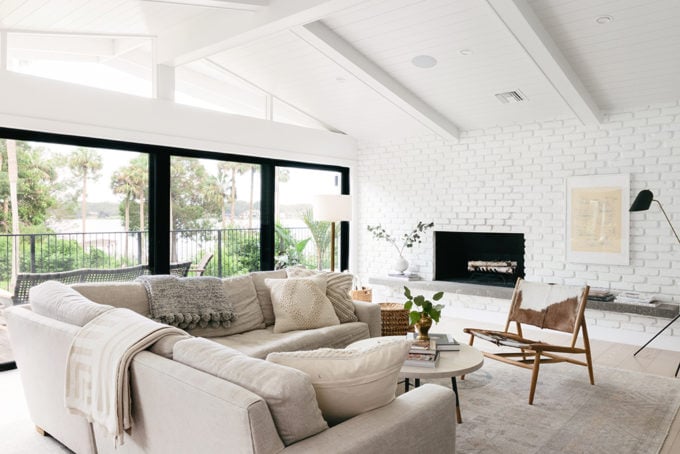 On brightening things up: I had a vision for the house. In the living room, we added a brick wall for texture (before it was just a regular wall), and put in beams and a fireplace ledge. We lightened the floors and painted everything white. The room feels as if it’s indoors and outdoors at the same time. 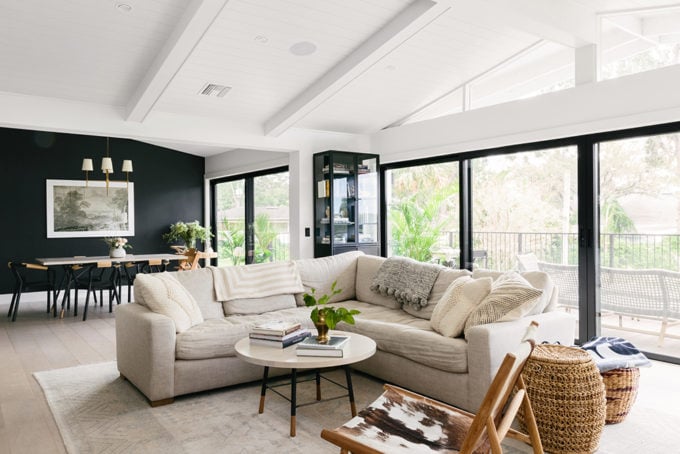 On an important sofa: There are few decor things Nathan cares about other than a VERY comfortable couch. He won’t have a cool-for-the-sake-of-cool couch. A lot of people on Instagram recommended this one from Restoration Hardware. We went to the store to try it, and Nathan was lounging around, doing all these awkward positions! I was hoping no one was looking at us. In the end, it met his approval. 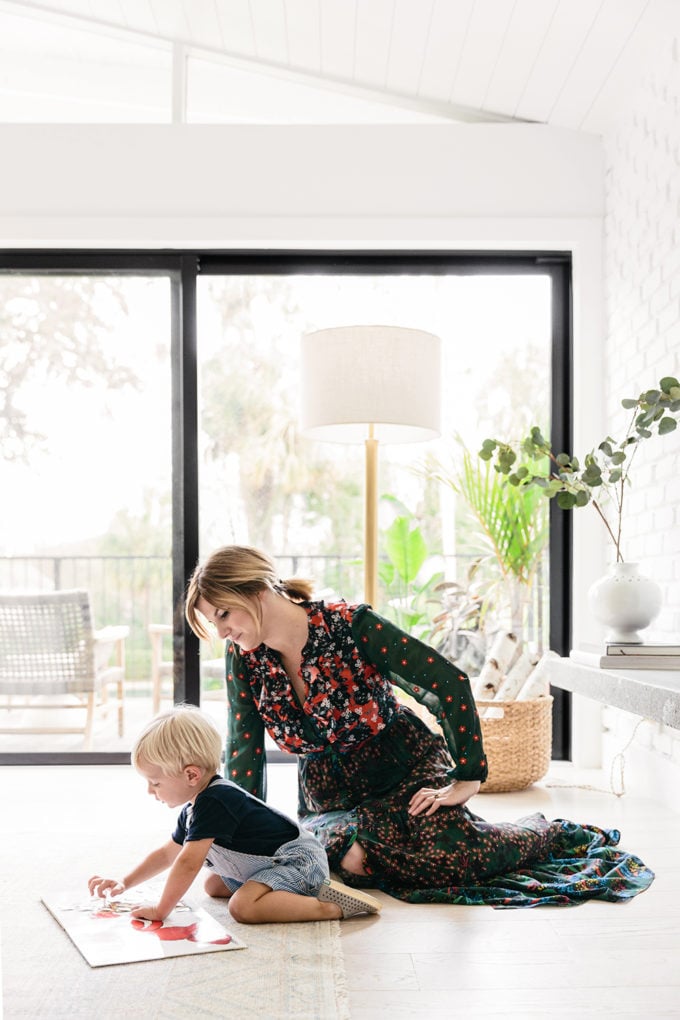 On relaxing rituals: I love watching Seinfeld. When I was pregnant, Nathan joked that the baby was going to think Jerry was his father because he heard his voice so often. And the show feels hilariously outdated — they talk about answering machines! 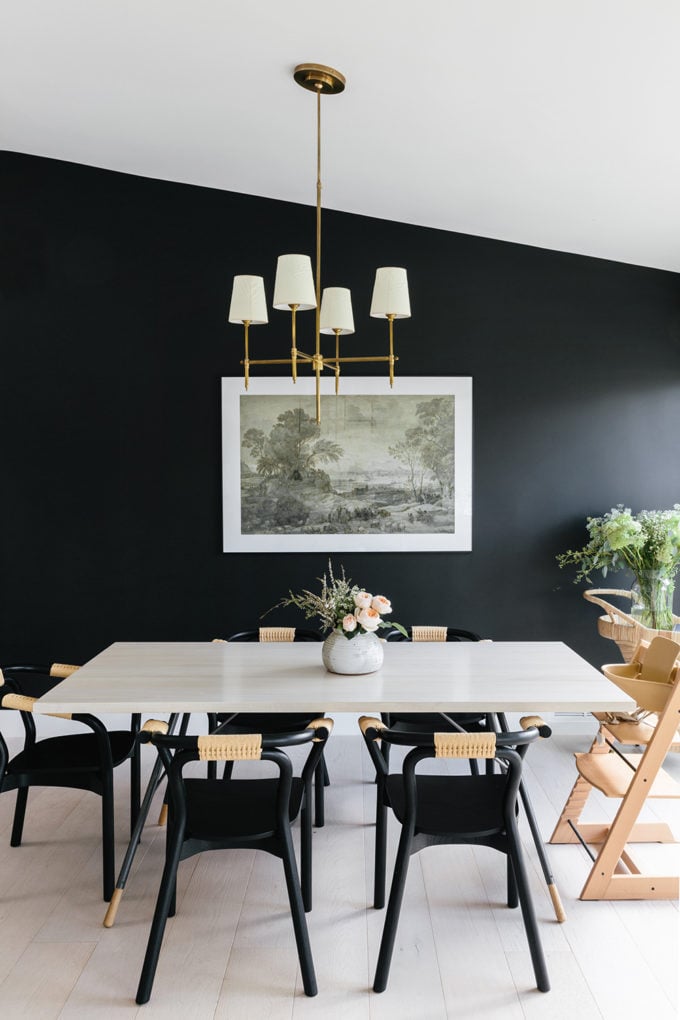 On a black wall: We chose Benjamin Moore Onyx, which is a nice, rich black. We wanted the dining room to feel separate from the living room. I actually did mock ups in Photoshop, so I could envision it; I cut out furniture and put chairs around a table. For everyday meals, we make pasta or bake fish in the oven. I also love oranges; we have it good in Florida. 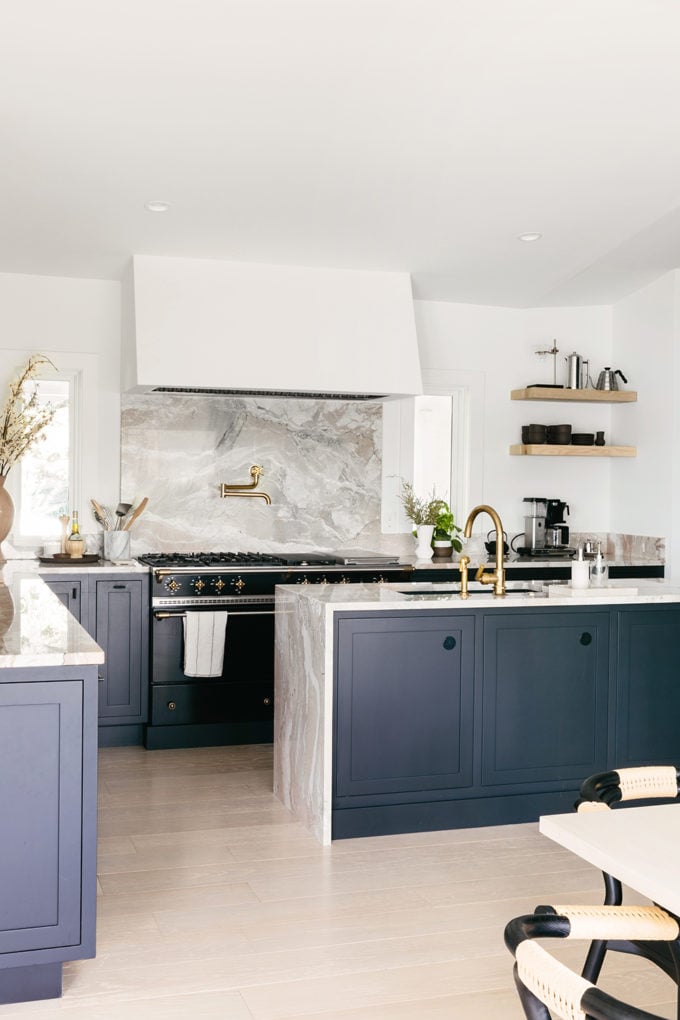 On living in Florida: I grew up in New Jersey but then moved down here. It took me a while to love it, but now I really do. We live a very normal suburban life; it’s nice. Disney World was probably my last Florida thing to embrace, but now we have season passes. I’m that person! Growing up, I always wanted to go but my parents said no. The culture is so different here, everyone just goes whenever. Some Florida people go every weekend! There are websites that give color-coded crowd reports, so you know if you should stay away. 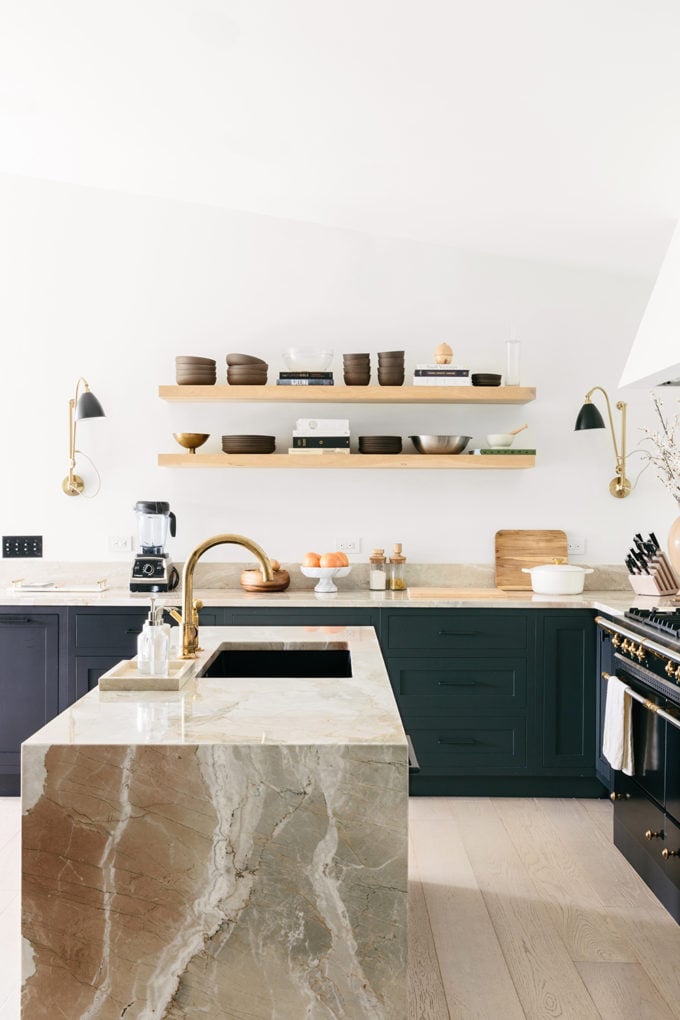 On designing a kitchen: I love having open shelving. It’s so pretty and makes the room feel more homey and rustic. My mom was very concerned about our dishes getting dusty, but it has worked out. There’s not much that’s high tech about the house, but we do have a sound system. We play relaxing tunes — Fats Waller, Django Reinhardt — while making dinner. 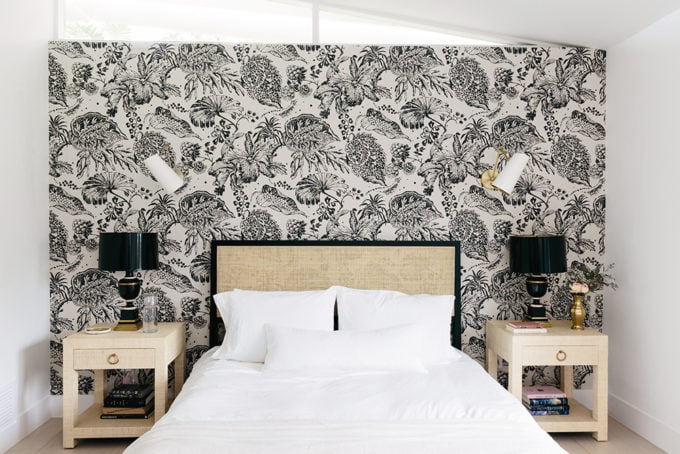 On taking care of friends: We’ve had a good amount of guests, which has made me happy. We treat the room like a hotel. I bring home mini shampoo bottles and sewing kits from hotels. We put out a travel steamer and a notebook with our wifi code. In the bathroom, I have extra toothbrushes, razors, a hair dryer and Q-tips. 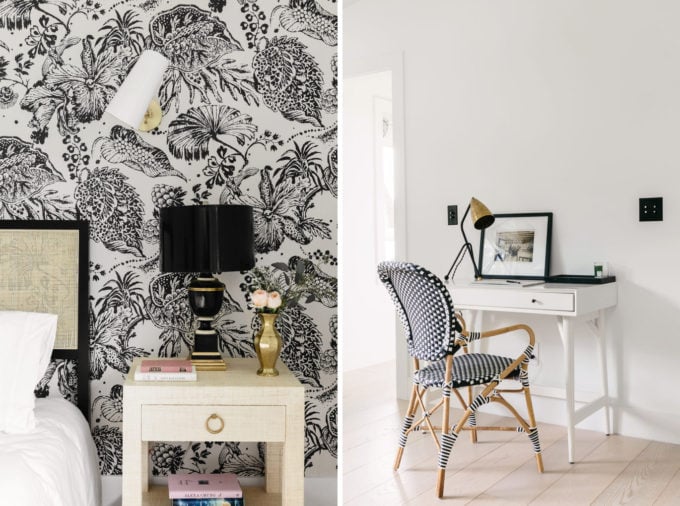 On a guest-room essential: The first time we had a guest was the first time Ford woke up three times in the night. Of course! So, now we put out a noise machine, too. 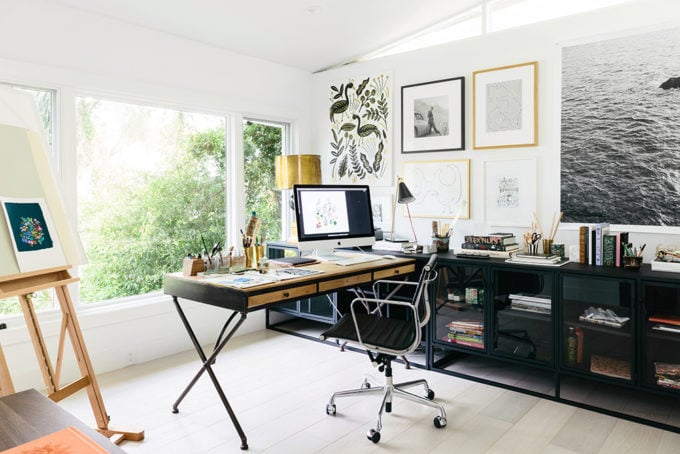 On a room of one’s own: During the day, I go into our company’s office, but I prefer to save my creative work and painting for when I’m home. The windows don’t have shades because I want bright light. Before I had a child, I always painted late at night; I’d stay up until 3 or 4 in the morning. That had to change, of course, but I still enjoy working in the evening. Everything’s quiet. The inbox dies down. It feels calming. 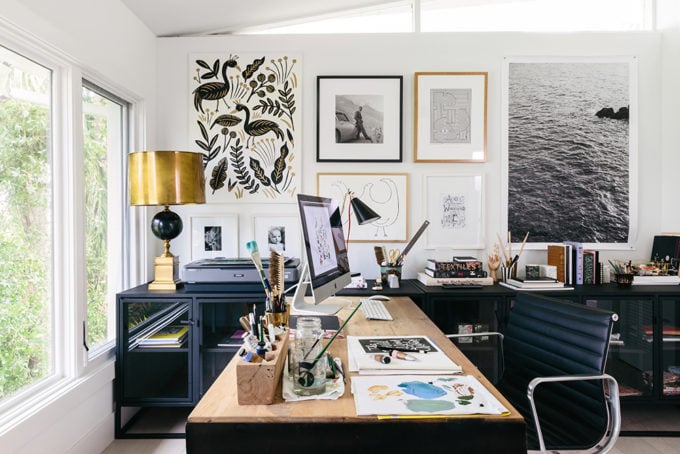 On a funny photograph: The photo of Sean Connery leaning on a car is from a James Bond movie. Ford, Nathan and Nathan’s dad actually all have the first name ‘James,’ which means their full names are ‘James Bond.’ Ford and Nathan go by their middle names, but Nathan’s dad went by James Bond and LOVED it. He had an insurance business, and his phone number ended in 007. He milked it. It’s fun. The nurses at the pediatrician’s office think it’s the greatest thing that Ford is officially James Bond. People get really excited. TSA agents freak out. 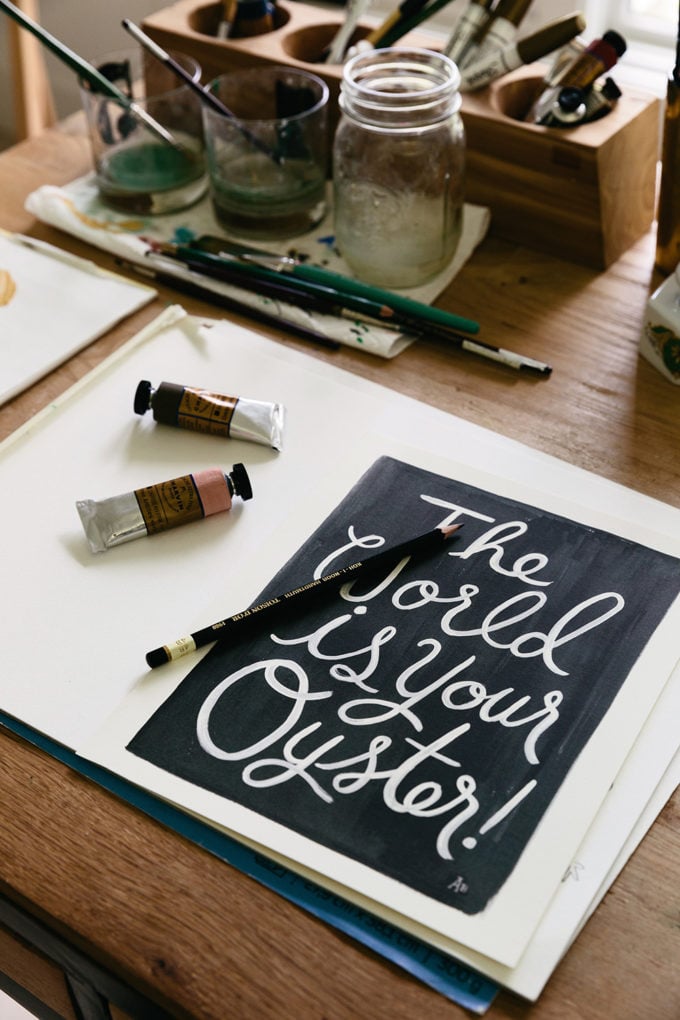 On founding a company: Many of the early years of Rifle were non-stop work. I didn’t see a friend for the first two years. Sometimes I wonder, why did I do that? But at the time, it felt very necessary to work 80 hours a week. We put so much into it. I joke to friends that my secret weapon is how hard I’m willing to work — putting in all the stuff that goes on behind the scenes and being willing to endure it.

On growing the business: Work is a wild road. Every few years, it feels as if we’re starting a whole new business because it’s a different phase of growth. Maybe you’ve figured out 100 things but then you have to turn and figure out something new. I sent my friend a gif of a guy playing Whac-A-Mole, and I was like, this is me running the company. 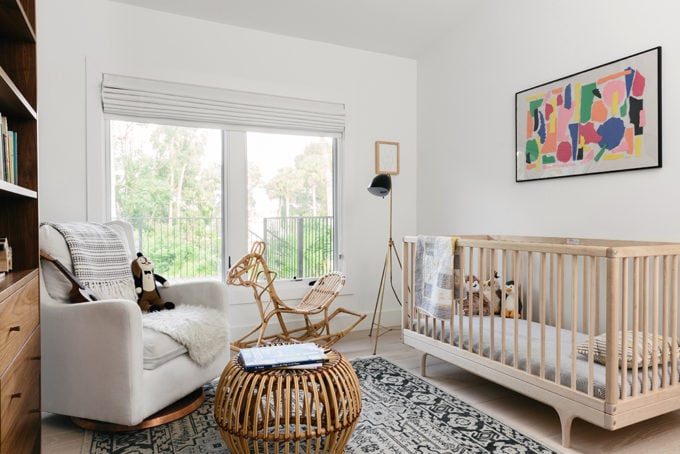 On a favorite toy: We’re expecting another little boy in April. They’ll share this room. The rocking horse is from Serena & Lily. I rolled my eyes at myself when I bought it, but Ford actually drags it out to the living room to play. I was like, oh, good, it’s not just pretty.

On homemade artwork: Ford and I had watched a Mr. Rogers episode where he toured the construction paper factory, and we were inspired. So, we got a bunch of colorful paper and tore off pieces to make this art. Now he’ll tell people, Mommy and I made that. 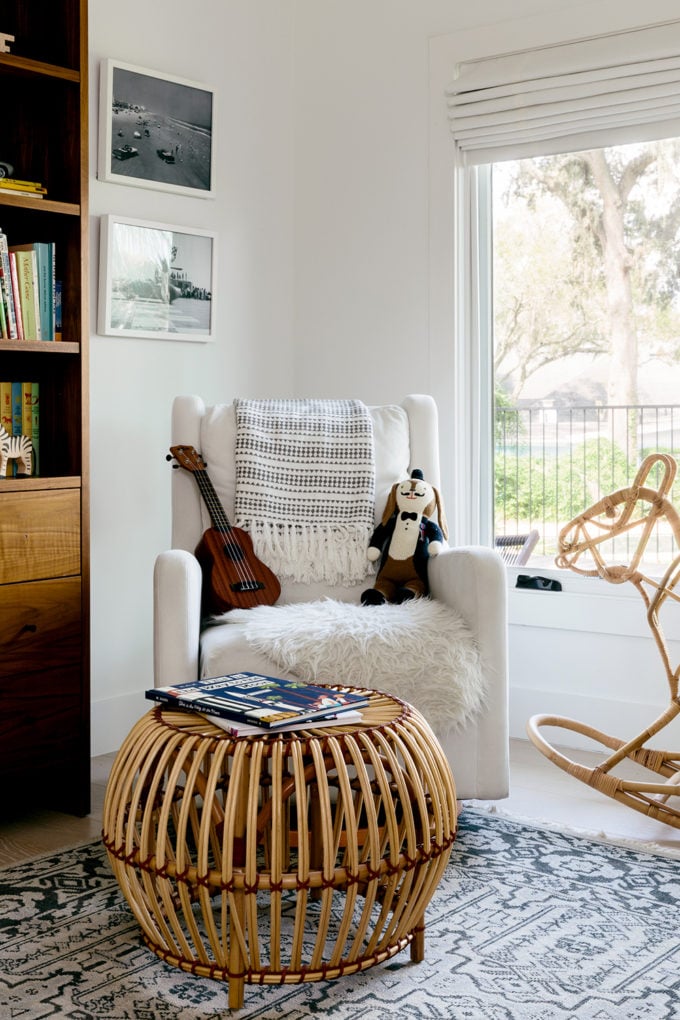 On meaningful photographs: The old photos show the Daytona 500 car race and Daytona Beach. Nathan’s family took me to the beach right after we moved. They started driving their car on the sand, and I thought, what is happening? It’s so weird and funny — you can actually drive your car and park on the beach. I love that these photos were taken in Florida. 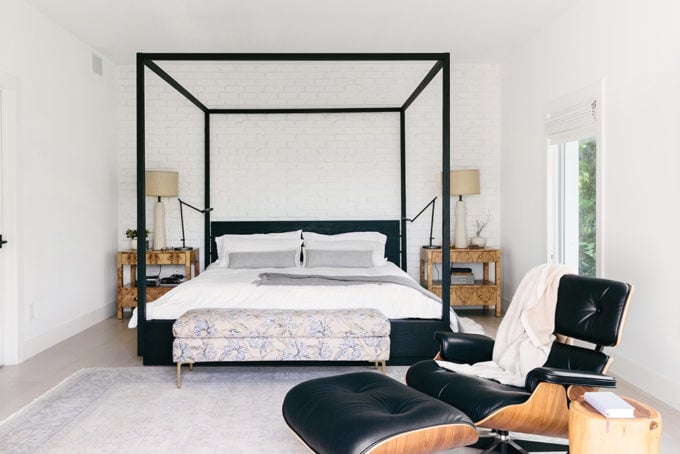 On a king bed: When we moved in, Nathan was like, are you sure you want a king? We’ll be so far apart. And I was like, IT WILL BE GREAT. The Casper mattress is wonderful. Nathan rolls around a lot, but I can’t feel it anymore. Our previous mattress was a used one I had bought for $100 back in college. The contrast is big. 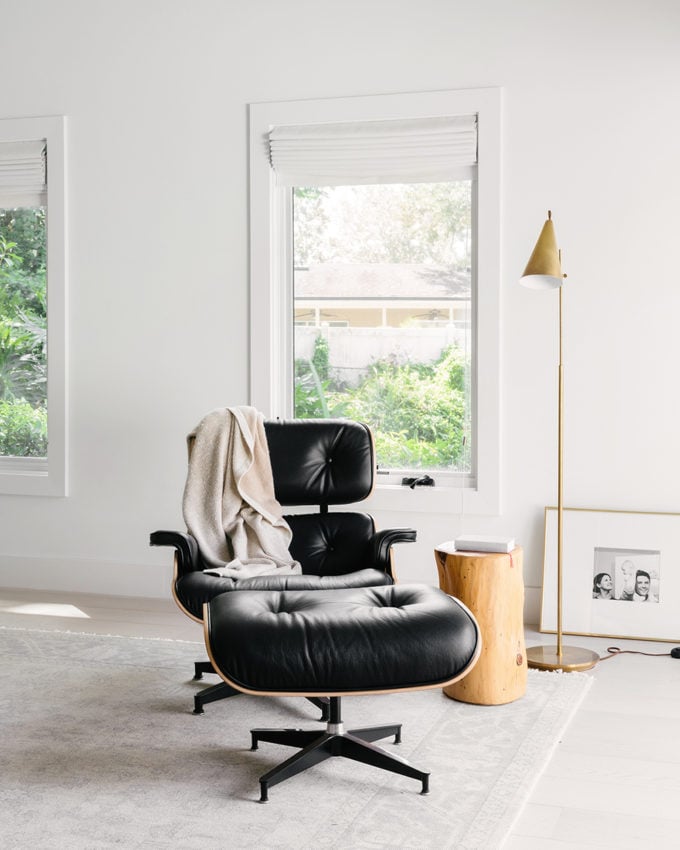 On a reading nook: We wanted a great reading spot. It was my forever dream to have an Eames chair. I had never sat in one until I was in an airport lounge, and it’s SO comfortable. This chair gets a lot of use. There are clothes on it right now, though, I won’t lie. We’re trying to be better.

On surprising decor: I don’t mind photos on the floor! This frame is really heavy to hang, so it kind of works here. I snapped this photo when we were all looking in the mirror. 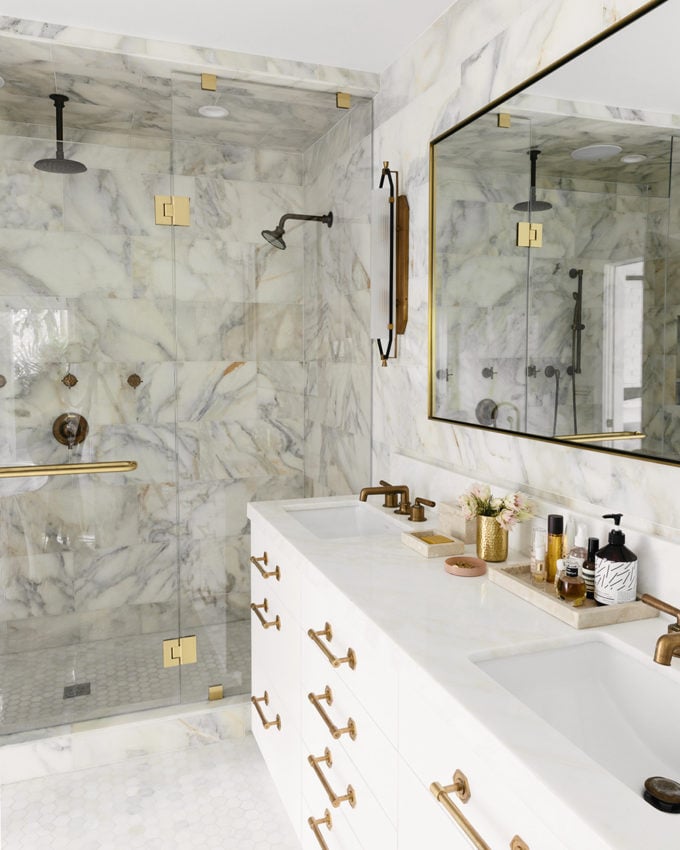 On a shower experience: The double shower is such a treat. I turn on only one at a time, but Nathan sometimes turns on both for maximum experience, and he plays Gregorian chants on the speakers! 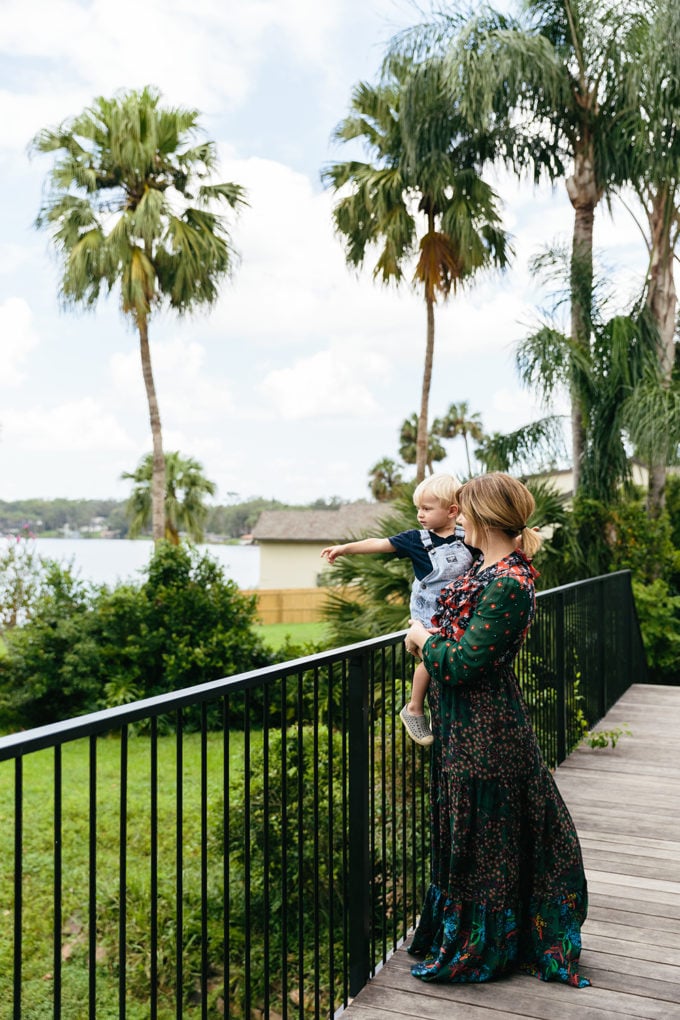 Thank you so much, Anna. You are wonderful.

P.S. Here are all our house tours, if you’d like to see. Looking for color? See this purple-filled Brooklyn townhouse and Utah home with an amazing mural. Want budget-friendly inspiration? This New Hampshire cottage is all about simple pleasures, and this Brooklyn space includes a trick for saving money on linens. Want tips for small spaces? Here’s a loft apartment and an actual tiny house. Love wallpaper? See this Brooklyn cabin-in-the-sky and this charming nursery. For international tours, we have a cozy London apartment and house in the Japanese countryside.