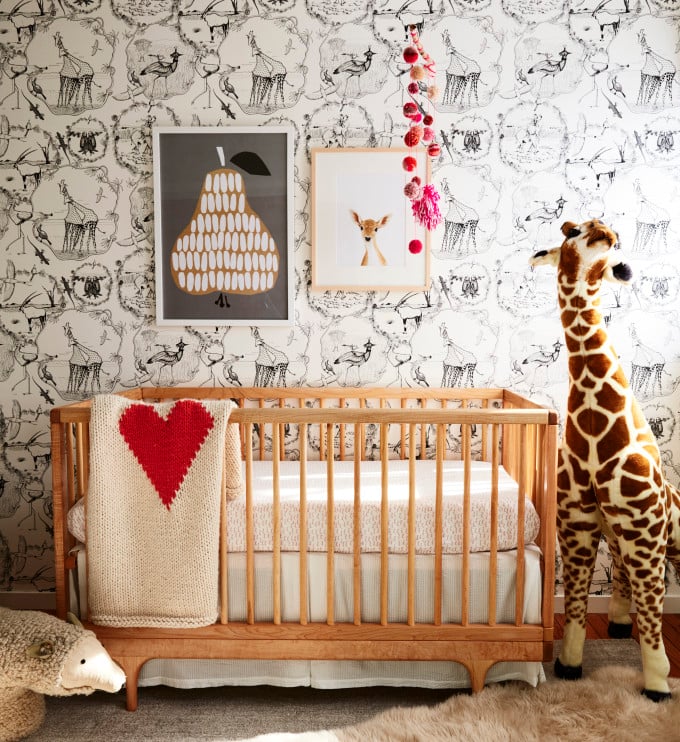 Stylist Kate Jordan and her husband David created the loveliest nursery for their five-month-old daughter, Izzy. Kate was sweet enough to give us a tour of the room, and share some wise and funny thoughts on choosing wallpaper, collecting stuffed animals and the whirlwind that is becoming a parent. Take a peek… 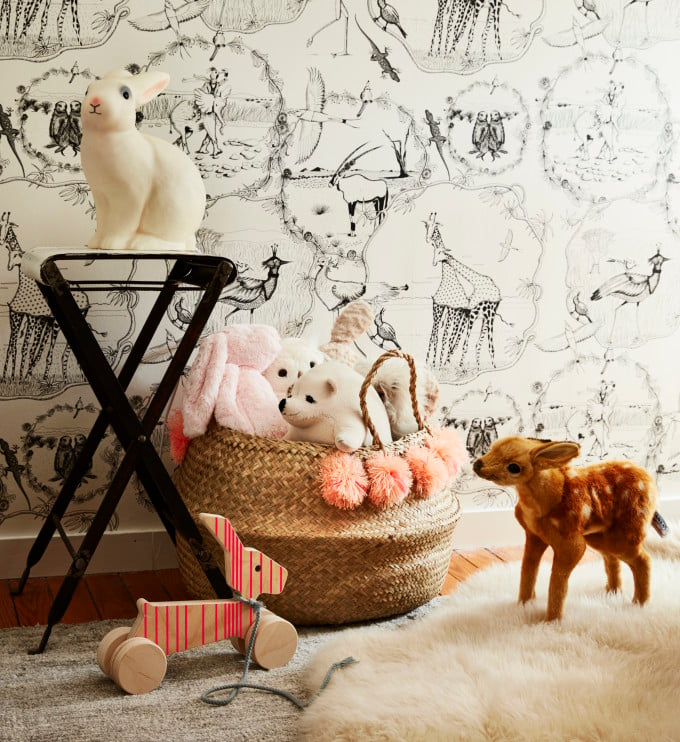 On collecting animals: I’ve been slowly amassing a huge collection of handmade stuffed animals for years now. As a stylist, I’d be like, “It’s a prop!” but they were clearly for my future child. When I was pregnant, any time I’d go to a different city, I would pick up a little animal. It felt kind of like, “You were here with me when I got this.” 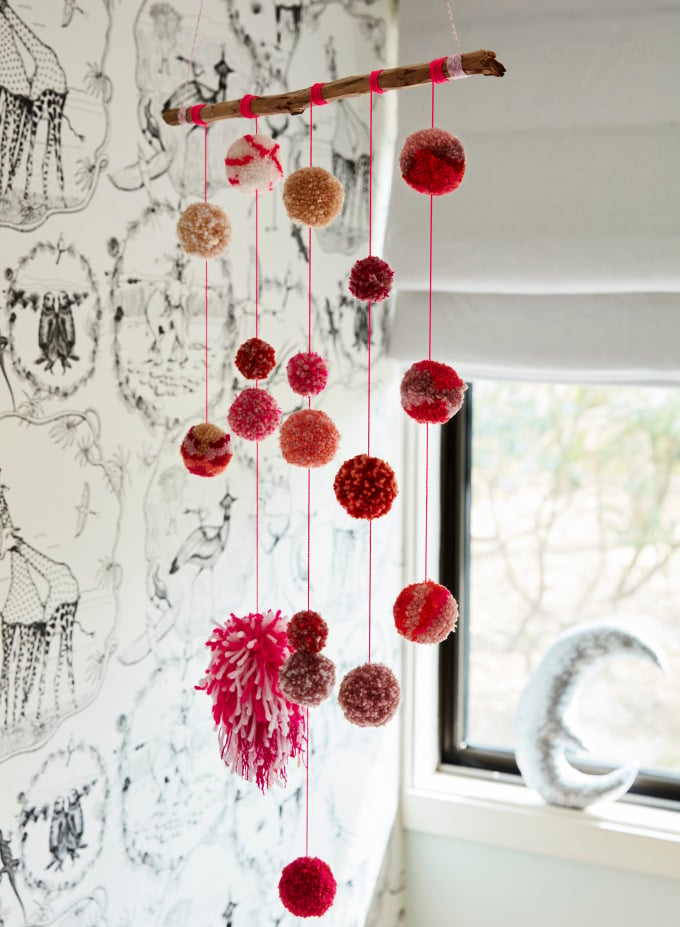 On photos vs. reality: None of the busy, plastic things appear in these photos, like the swing that puts her to sleep immediately. There’s the “dream world” nursery, which looks perfect, and then there’s the reality of needing places to put your baby down somewhere safe. You have to be able to go to the bathroom! 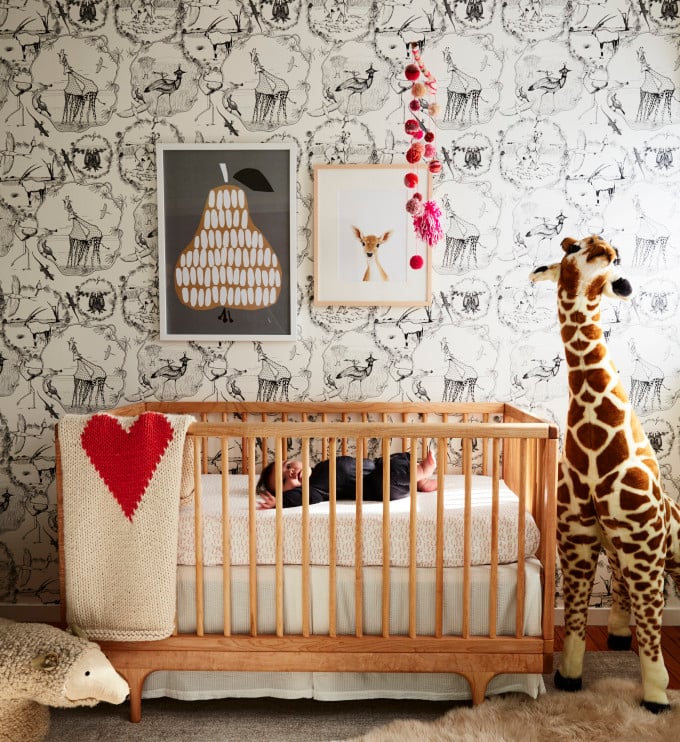 On friends of other species: Once, I was at this amazing vintage shop in Minneapolis. I had only known I was pregnant for a week and hadn’t told anyone yet. I saw that other big animal [on the left] and knew I wanted to buy it for my baby. Some people think it’s a sheep, and some people think it’s a polar bear. It’s whatever you want it to be! The giraffe was a gift from my sister, who knew I’d wanted it forever.

On keeping a room varied: I like the pear print because it keeps the room from feeling super one-note. I’m not a theme-y person, and even though her room has taken on kind of an animal theme, I think rooms get more interesting when there are different things going on. 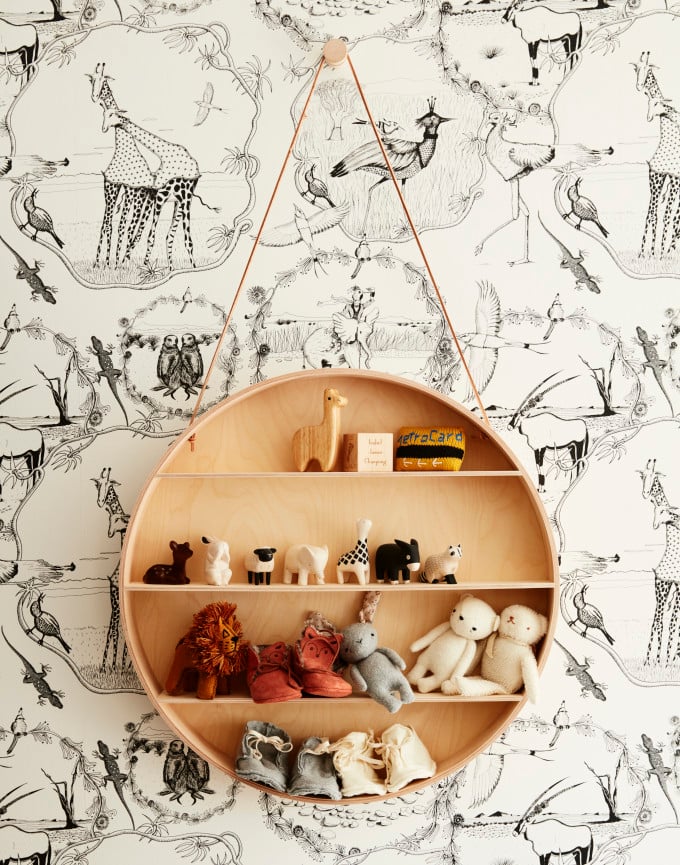 On last-minute decisions: I ended up buying (and returning) three rugs before we finally settled on the fourth! The UPS man hated us. HATED us. When he delivered the final rug, I was like, “That’s the last rug you’ll ever deliver to our house!” and he just shook his head and was like, “I don’t know if I believe that.” The same thing happened with the wallpaper. When the guy came to install it, he was like, “Which one should I put on the wall?” We had two and we hadn’t decided yet. It was a game-time decision. The other one was a more subdued, simple pattern, but we went with this one, which we thought would spur more imaginative thoughts! 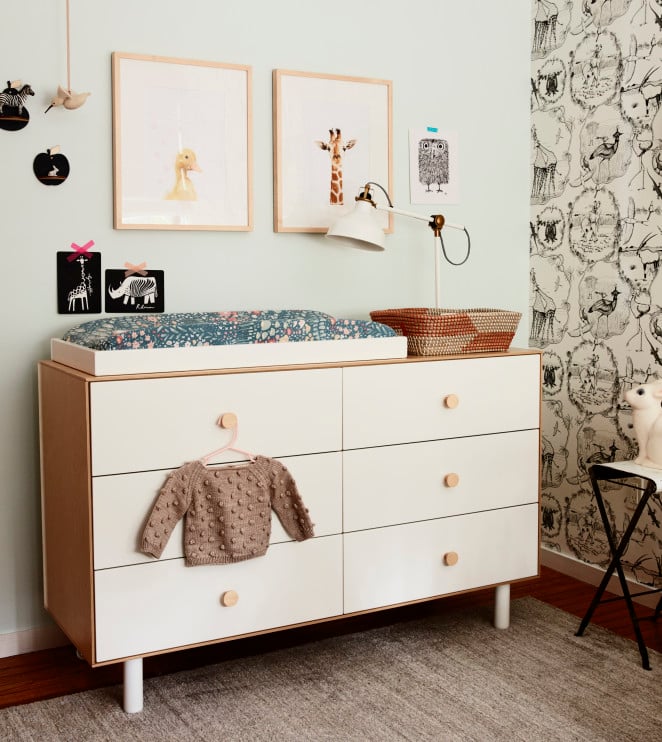 On an amazing new-mom gift: Two friends of mine put together the most amazing basket, full of everything I could possibly need, but didn’t realize I needed. There was a NoseFrida, teething stuff, safety Q-tips, all-natural butt cream, an amazing sponge for giving her a bath… So many things I didn’t know existed. It must have taken them forever to plan it and put it together! I’m constantly reaching for things from that basket. 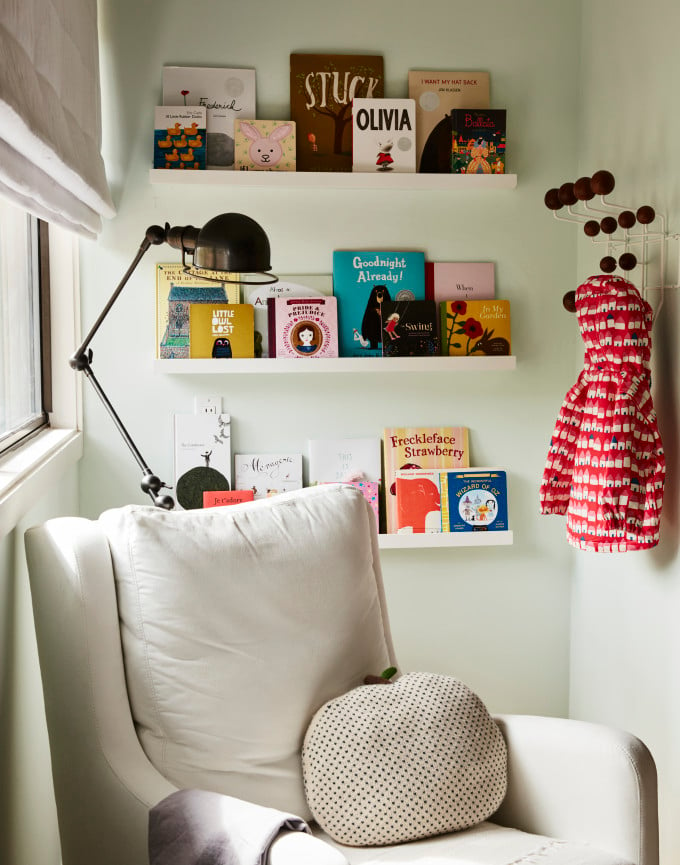 On collaborative decorating: My husband and I worked on her room together. We put it off for a long time, and eventually we were like, “She’s coming whether we’re ready or not!” David chose the paint color. I wanted to go with a soft pink, and then one day he came home with this green one. I was like, “Ehh, I don’t know.” But a couple weeks later I decided he was right. Why pigeonhole her with a pink room? 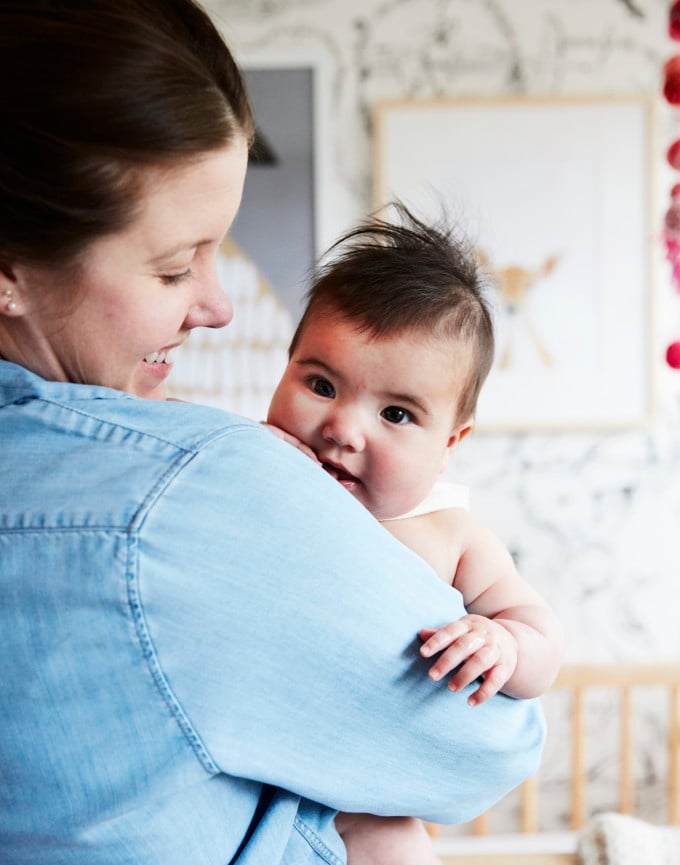 On letting her be her own person: Sometimes strangers will think I’m her nanny or say things like, “HOW do you look like your mother?” It was kind of a shocking thing; I think you assume your baby will look like you. But then a couple months ago, I had this realization that she’s her own person and she doesn’t NEED to look like either one of us. She’s going to have her own interests and her own free will. She can be whoever she is. 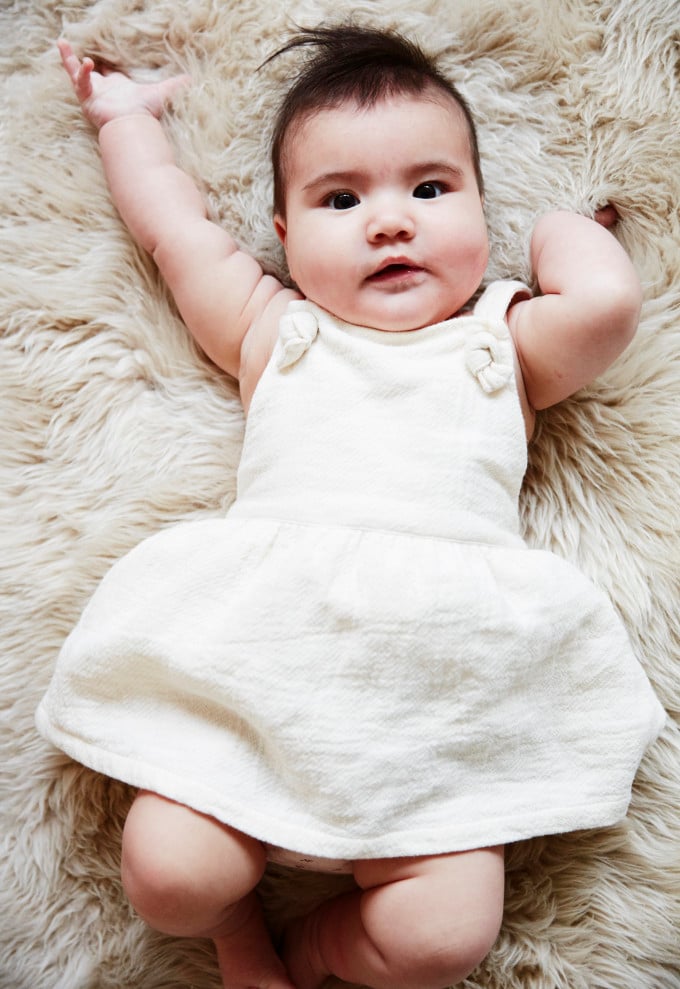 On the crash course that is parenthood: You learn a lot about yourself in a quick amount of time! Before having a baby, I wasn’t conscious of things like needing to be able to get out and move, or taking time by myself. New parenthood is every emotion. We were at this music class this morning, and I was talking to another mom. She was like, “Aren’t you loving every minute? I’m loving every minute!” and I was like, “Really? EVERY minute?” But it’s a trip, and it’s amazing.

Izzy’s dress is from Zara.

Thank you so much, Kate (and Izzy)!

(Photos by Kate Mathis for Cup of Jo. Interview by Caroline Donofrio.)

What a wonderful tour for it!

I’m curious, did you stain the crib? If so, in what stain? Thank you! Love the room!

I just looked at this again and it is the most fantastic use of wallpaper I’ve seen. https://www.etsy.com/shop/leeya

hi!
nobody mentione d that APPLE polkadot CUSHION!!
it is awsome!!where is it from?

Hi Millie!
The pillow is from Oeuf. :)
xxK

I cannot tell you how happy we are to see our crib in Kate’s home and in such a beautiful, warm and playful nursery. Thank you for sharing and for giving us a peek inside your home. We loved it.

Where is that adorable wallpaper from? The hyperlink to the site doesn’t appear to be working.

Gorgeous space! I get the ‘how are you her mother’ thing too – I am half Chinese but have a very blonde, blue eyed baby. It is hilarious hearing people voice their disbelief!

Love this room but love the honesty of this post more. What a beautiful little girl, wishing your family all the best for your future adventures, from Hello Sitter x

Oh sorry….I am going to add to the “where is that from”…..but…..the changing pad cover. It. Is. Amazing!!! Oh where oh where please? Gorgeous nursery! I love no-themed nurseries the best! xo

Hi Mae,
It’s the Posey program from Dwell Studio, though it looks like the company has discontinued it. A quick Google search turned it up here. Glad you dig it!

beautiful nursery! i love the wall color too- her husband did a great job picking it out