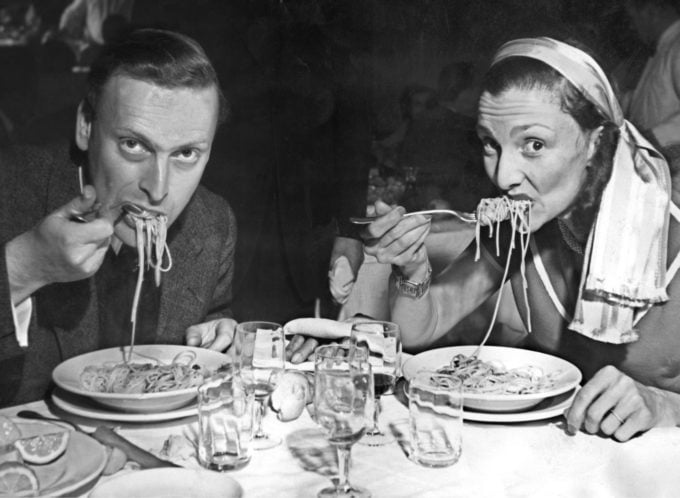 We invited friends over for dinner a few months ago, and while eating pasta and emptying a few bottles of rosé, we were having a nice time chatting in little groups. But then Alex busted out a question that brought everyone together…

“So… who’s your celebrity look-a-like?”

I’m not sure why the question popped into his head, but once our friends started naming their doppelgängers, we were all crying tears of laughter. Here’s what people have said: 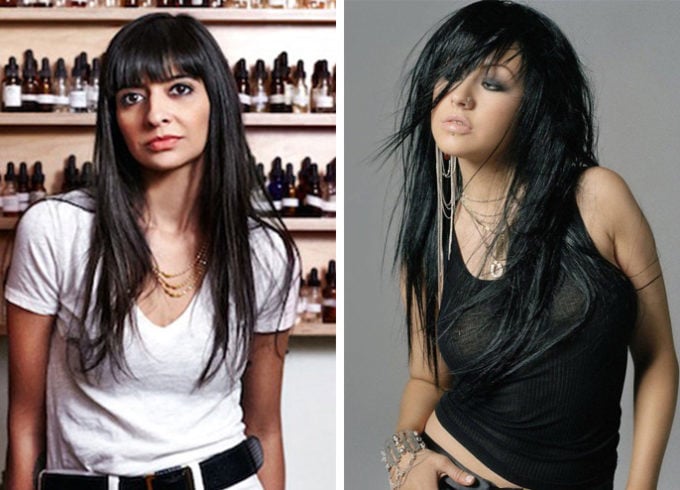 Kavi gets Christina Aguilera when she had black hair. 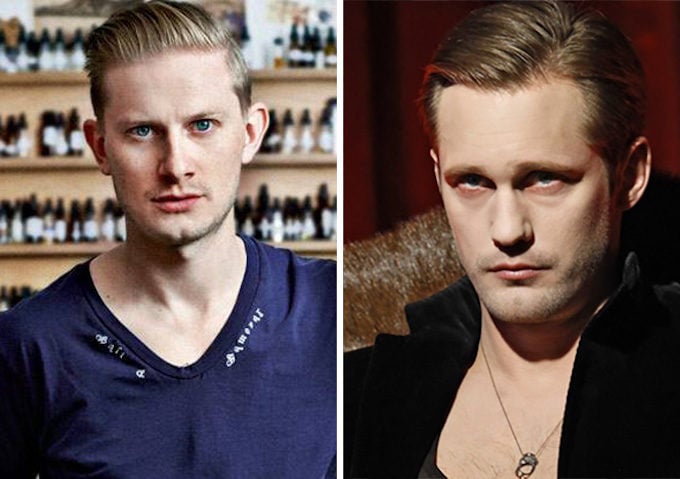 Her husband, David, looks like Alexander Skarsgård — specifically as a vampire in True Blood. 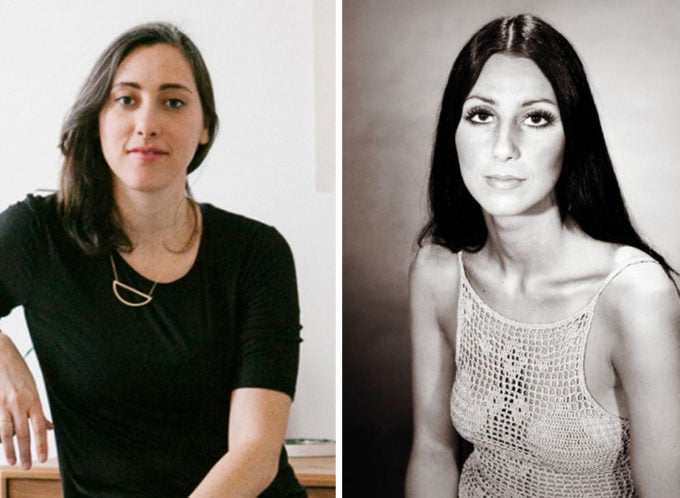 Stef IS a young Cher. 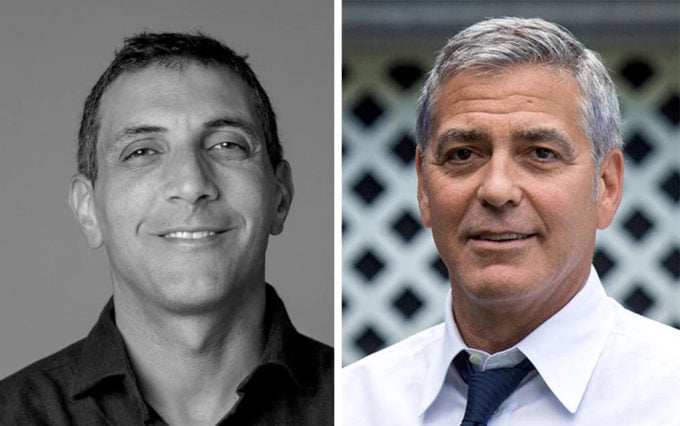 Ameer said, “I have gotten George Clooney, usually when I’m dressed in a suit. But the one I get more often is Jeff Goldblum.” 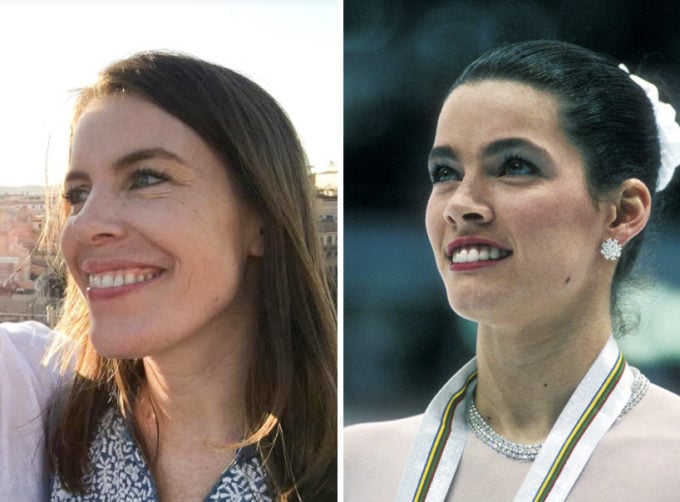 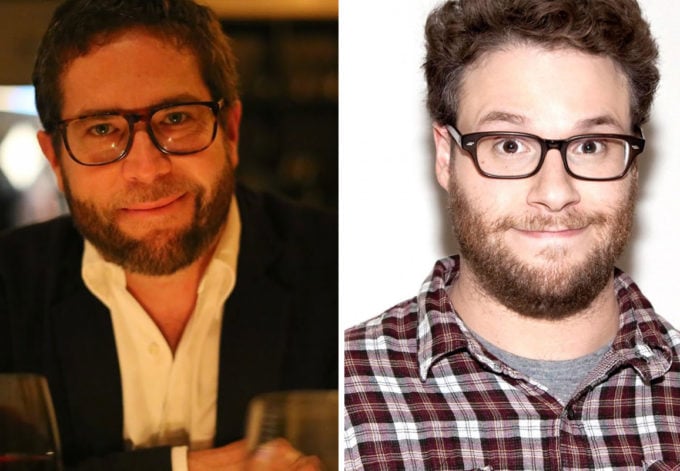 And a flight attendant recently compared Alex to Seth Rogen. 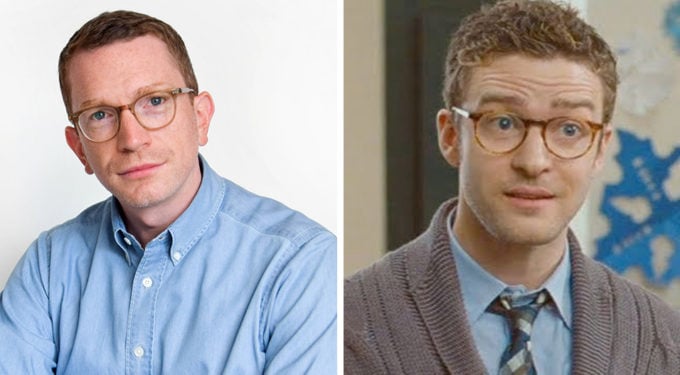 But Chris was the evening’s hero. “On a really good day, I’ll get ‘nerdy Justin Timberlake,'” he said. People also liken him to Ron Howard and Lane from Mad Men, and I pointed out his similarity to comedian Chris Gethard. “YES! All of them,” he said. “I’m every stuffy dork.”

What about you? Do you have a celebrity look-a-like?

P.S. A very easy dinner party, and are you okay with conversational pauses?

Venus Williams. I think my husband has a crush on her.

Hahaha to the big teeth comment. I, too, have “big” teeth and was once compared to Julia Roberts.

Ooh, this game could get uncomfortable! (Also, Alex is far more handsome than Seth Rogen.)

Joanna, you often remind me of a young Jill Clayburgh.

I was in Jane Magazine in the early ’00s bc “People Say I Look Like Ashlee Simpson” – I’ve also gotten Luna Lovegood and most recently Emily Osment (who is from Hannah Montana, had to google her) and I can totally see that!

I don’t think I have one! I’m Chinese-American, but I have darker skin, double lids, and non-almond shaped eyes so I don’t really look like any of the few Chinese actresses that are known in the U.S. I have randomly got Leah Remini before, but I have no idea whatsoever where that came from…

I am shy and I don’t really know how to start a conversation with people I don’t know well, so I am definitely going to start using this question! But I will have to think of what my answer will be..

For a while, I used a very nice black and white headshot of Janeane Garafolo as my profile picture on Facebook (in the early days). I never got so many compliments on my picture than then. Funny part about this, not only have people told me I look like her (short, big glasses, brown hair) I *sound* like her and with my sarcastic sense of humor, when the ‘who is your celebrity doppleganger’ question gets asked, people are stunned when the realization hits.

My life went on for a long time without ever being given a celebrity lookalike. Until the Game of Thrones show got popular, and now I hear that I look like Maisie Williams all the time!

I’m a singer and a little bit on the plumper side, so often I’ll get Adele. But facially I look nothing like Adele! (not that there’s anything wrong with how Adele looks… I’d love her auburn-y hair colour actually)

A recent comparison I was rather surprised and flattered by was the most recent Bond girl Lea Seydoux… I’ll take that!

Generally I have no idea who I particularly look like from the celebrity world!

A while back when Grey’s Anatomy was new and big, I got Ellen Pompeo a lot. Like stopped in the grocery store.

I get Solange and it makes me transendently happy! I adore her. And it’s wonderful to see my complexion, hair texture and my underbite reflected so beautifully.

Ever since Les Miserables (film version) came out, I consistently get told I look like Amanda Seyfried. We both have plain faces and ver large blue eyes, so I can see the resemblance.
I’ve gotten other random ones over the years- but the common thread is always huge eyes!

Multiple unrelated people have said I look like a cute version of Katy Perry, but Katy Perry is already cute so I’m not sure how to interpret it.

I once walked into a crowded pub where a cover band was playing to a drunk crowd. When the singer spotted me, he immediately stopped singing to tell me I looked like a blonde Marisa Tomei in My Cousin Vinny. I was in my early twenties at the time and had to Google the reference. Her big eyes and full cheeks looked a lot like mine. I’ve always felt self-conscious about my soft, round face but now I just think about Marisa Tomei and how beautiful her face was in those Google image results.

I used to be told Anne Hathaway all the time. Dark hair, light skin, big eyes. But lately no one has said anything! So who knows anymore…

Actually, just remembered more recent suggestions that I look like Rachel Weisz! She is a hungarian jew like me and I wouldn’t be surprised if we were distant cousins, so it made sense and was o h so flattering. :)

Yesterday someone said that young Joan Didion was my doppelgänger. I almost died of happiness even though I don’t reaaaallllyy. My husband confirmed this morning that it’s true and said “wow, she’s like your hero” I KNOW!!! It was based on this picture. I really don’t look like her, but I look a bit like this picture :)

Joanna you look like Laura Main from Call The Midwife.

I get Sarah Silverman, which is definitely just because I have long dark hair and strong eyebrows.

I have someone who looks like me in the same city – we work and run in different circles though. But the best compliment ever – I was once (!) told I have legs like Steffi Graf. Sadly those days are no more but I tell myself if I got super toned I at least have that ?

I don’t really get anyone ever :( I wish I did! But my fraternal twin sister always used to get Uma Therman, which I still see.

Funnier though, my sisters and I were in Montreal a couple years ago and went to a cute boutique in Mile End. The shop people were following my twin around and saying things to her like “anything you need…”, while totally ignoring me and my other sister. When we were leaving they were like “are you Rachelle Lafavre!?” I had never heard of her but apparently she is a French Canadian actress from Twilight. It was a hysterical thing to witness!

Emma Watson! I’ve been hearing it over the years from people from all around the planet. I’m probably the biggest Hermione fan you can find, so you can imagine how much I loved the comparison when Emma and I were both kids; but now I love it even more because she’s an amazing lady and oh so beautiful! and I feel so humble every time someone new says “have you ever been told you look like Emma Watson?”. More than you know, friend, more than you know.

Nobody, but my cousin looks like Zooey Deschanel, bangs and all.