What Shows Do You Watch Over and Over? 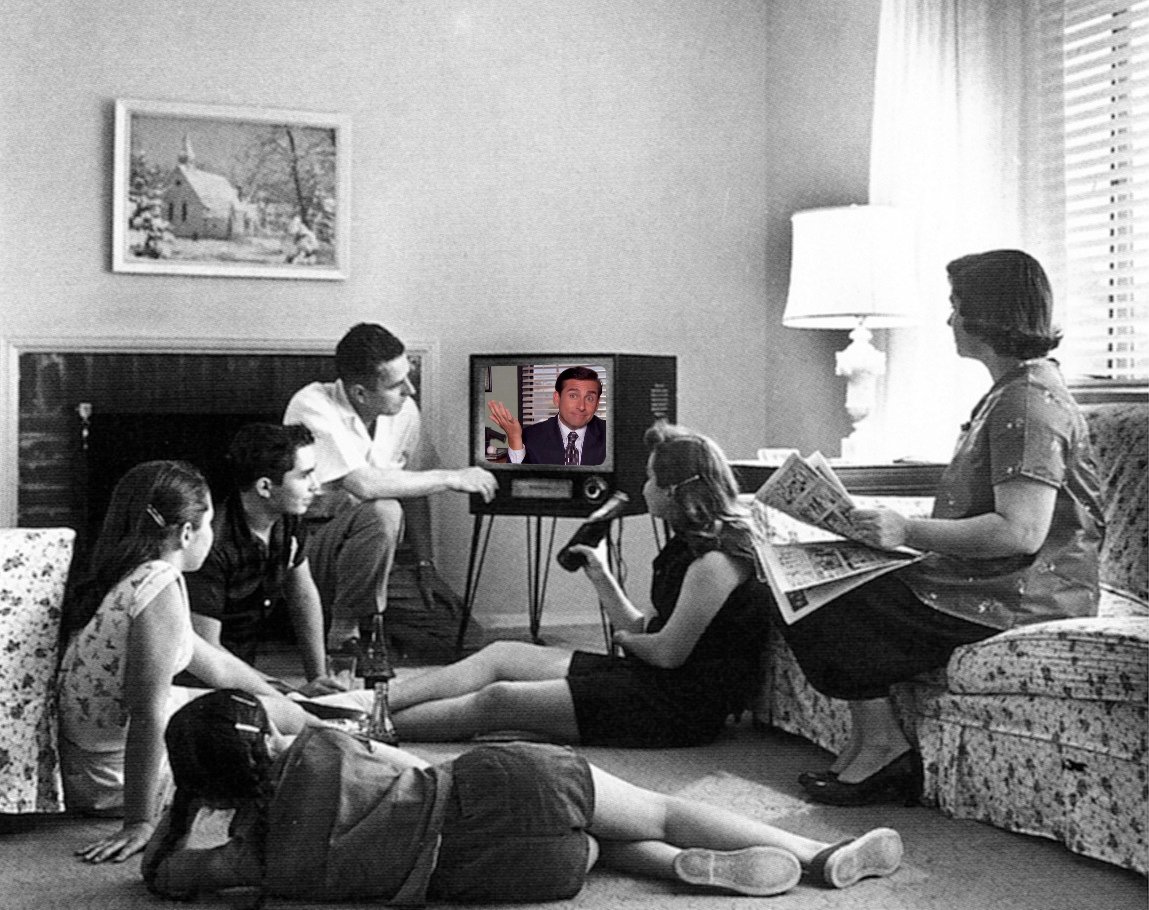 If you described a channel that only aired shows I’d already seen — the same characters, same conflicts, even the same jokes — I’d guess you were talking about paradise…

My habit started in middle school, when I discovered gossipy CW dramas at the corner video store. During important moments — a crush, school dance, seventh-grade social crisis — I knew of a season to either coach or console me. These days, if I have a particularly rough day or the radiator clanks in the middle of the night, the familiar company of a tried-and-true sitcom is only a few clicks away. (Nothing bad can happen when I’m watching Gilmore Girls, I tell myself.)

I’m not alone. My friend Christine has watched the entire series of Friends, start to finish, at least 20 times. “I turn it on while I’m puttering around my apartment. I can sense an upcoming joke, but it still makes me laugh,” she says.

But how is the initial appeal not lost when watching something over and over? “Psychologists have found that repetition breeds affection. Familiar fare requires less mental energy to process,” writes Derek Thompson. “And when something is easy to think about, we tend to consider it good.” For my friend Kara, it’s about knowing exactly where a show will take you, no surprises. “Life’s unknowns have always made me uncomfortable — outer space, the deep sea, Game of Thrones,” she says. “I have probably watched more episodes of Friends than of all other television watched in my life.”

Another reason we enjoy re-watching something is the actual content. “The things that we do feel compelled to re-watch or re-read are those that provide us with either comfort or perspective,” explains psychologist Neel Burton. My friend Jade still finds The Office funny even though she’s seen it so many times she’s lost count. “After a bad breakup, I was looking for a laugh, and that’s when my love affair began,” she says. “I get the giggles just thinking about the show. The cast feels like a part of my life. I love them like Stanley loves crosswords. I love them like Dwight loves beets. I love them like Jim loves Pam. I could go on and on and on.”

Maybe most important, though, is the nostalgia we feel, whether it’s for the on-screen experiences or the memory of the years when we first saw the show. Watching the series “tells us that there have been — and will once again be — meaningful moments,” Neel says. They also hark back to simpler times, like the lack of social media on Friends. But, as Christine points out, “It’s hilarious to realize how there would be zero problems if they only had cell phones.”

The other day, while I was grocery shopping, the Dawson’s Creek theme song played over the store’s speakers. Some of the shopping patrons sang along, and two workers restocking kale even began to reminisce about the show. “I don’t want to wait to watch this tonight,” one joked loudly, and the entire produce aisle shared a collective laugh. It was the kind of scene I wished I could watch again later.

What about you? Do you watch any TV shows over and over? Or do you refuse to watch something twice?

P.S. On sex and TV, and which classic movies have you not seen?

Tags: tv
597 COMMENTS
WRITE A COMMENT
Design
most popular
01
My Sister’s Home Makeover
02
What Are Your Top Three Books?
03
The Ultimate TV Guide (If You’re Looking for Something Great)
04
Catherine Newman’s House Is a Joyful Jumble of Books, Games and Cats
05
Behind the Scenes: Making a Magazine Cover
May We Suggest…
By Kim Rhodes
Design
The TV Show I Can’t Stop Watching
July 9, 2020

I feel really happy knowing so many of you are also rewatching Gilmore Girls! A few I also go back to: gossip girl, lost, 3rd rock from the sun, twin peaks, arrested development, the office, the original unsolved mysteries (I love Robert Stack!)

Friends. I know Sex and the City off by heart. Gilmore Girls and Grey’s Anatomy. How has Grey’s not come up in the comments?

Gilmore girls – I have watched every episode three times. I love Lucy, Sex and the city, Friday night lights and yes, Seventh Heaven!

Favorite movies are Harry potter!!! And I could watch Centennial over and over

Freinds, Gilmore Girls, Sex and the City are a few favourites to keep playing in the background after a long, exhausting day.
Repeat watches are not only fun but also familiar in the sense that it reminds me those simpler times when technology had still not taken over, but there were phones and internet, just enough to make work easier.
Also, I grew up with the characters on this show, somehow they feel like people I know, people I am friends with… and that’s somehow comforting and reassuring in this ever-constant change that’s happening… I really want the world to change back to what it was in the late 90s or early 2000s, it was still difficult to scrape by but people were better and not everything was on social media ..

Golden Girls!! It’s such a throwback show but the jokes have really stood the test of time!

I know I’m late to this party but I’ve watched Ann with an E about 6 times this summer. It makes me feel comfort in this time of insane news. I’m also about to start watching I love Dick for the third time. Also, Pride and Prejudice from A and E (5 or so hours long!) is always a hit!

The other day my husband and I were surfing through options to watch on Netflix and he said “Have you ever seen this show The Office?”. It made me laugh so hard because that’s what we always watch when we can’t pick anything. Also Seinfeld, Arrested Development, Freaks and Geeks, and Sex and the City are ones I revisit over and over.

Sex and the City, and Arrested Development.

The West Wing. Best. Show. Ever. I’ll never get tired of it.
The Newsroom. Did anyone esle fall in love with all those characters? Oh my god, Neal Sampat!
Gilmore Girls for long winter evenings.
Friends, an episode once in a while, never fails to make me laugh.
Donwton Abbey, feels so cozy and comfortable, I want to live with them all.
Sex and the city, I think that’s the one I’ve watched the most.

This sounds like my life on constant replay. I can recite The West Wing but I never get tired of Josh or Charlie. Then onto the Newsroom which in my opinion did not last long enough Sorkin never disappoints with his writing. Gilmore Girls and a cup of coffee is a staple for feeling carefree again.

This! We’re watching it again now, and Santos just won Maine back from Vinick and is only a few points down nationally. Toby just confessed to CJ. No matter how many times I see these episodes, they are riveting! And they seem especially relevant right now.

I love the Newsroom! I have watched the entire season multiple times and now want to re-watch it! Thanks for the reminder ;)

West Wing, absolutely. There’s something about revisiting those characters that just feels like going home again. And if you ever need a smile, queue up that scene with CJ Cregg and Marion Coatsworth Haye. Do it. :)

YES! Such an incredible series!!

Or “WOOT CANAL!” Whenever I’m sad I start there.

The O.C., Friends, The Office, Frasier, Gilmore Girls. So comforting to watch an older show.

Hands down, I think I’ve seen every episode at least 20 times. Sometimes I even listen to it to help me fall asleep (since I can picture the scenes in my head).

Friends fans out there?

I have binge-watched all of 30 Rock three times and will probably go back to it again in another few years. It’s the kind of show that makes me feel like everything will be ok in the world. Plus, it keeps me laughing time after time, no matter how predictable Tracy Jordan’s antics are.

As far as shows we always turn on in the background or when we aren’t sure what else to watch: Arrested Development and Seinfeld are the clear winners.

My husband keeps rewatching Sons of Anarchy (even he can’t tell me what he likes about that show) and my guilty pleasure when I’m home alone on days off is Sex & the City. I only own 3 seasons on DVD and just watch those same episodes over and over and over and over. I love thinking about pre-social media crazed NYC.

Yes! 30 Rock is a strange addiction for me. I can tell that I am stressed out or overwhelmed by whether or not I am watching 30 Rock. I think that it’s a good(ish) addiction because it’s one of the funniest shows I’ve ever seen and I am totally in love with all the characters. However, I try and be judicious about checking in on them again, because if I watch one episode, I will inevitably watch them all 2-3 episodes a night for months. I also tend to re-watch Chewing Gum, which somehow has some similar flavor for character driven wacko storytelling.

Anyone else love real world/road rules challenge pre 2008? I don’t know what it is…but it’s for me.

Also love old seasons of the Real World from my high school days (2001), but they’re hard to find.

Echoing every last thing and then some about what your friends had to say about FRIENDS :)

My husband and I love to watch Cougar Town. We discovered it after it got cancelled. I don’t think it got the credit it deserved! And it is the absolute best show to drink wine with. It’s like they are your drinking buddies!

YES- I LOVE that show.

And Freaks and Geeks!

Reply
the cape on the corner

my so called life. all the holiday episodes are part of my yearly traditions, especially halloween (even tho it’s not one of my favorite episodes) and christmas! it’s almost time to watch the pilot, which i associate with the start of the school year.

I’m not sure if anyone has mentioned this one yet, but MAD MEN. The eye candy! I have probably watched the whole series about three times–I’m sure I could even watch the show on mute just to admire the costumes and set design. I’ll be honest though–Don Draper doesn’t hurt either :P

YAY!! I was hoping someone would say Mad Men! Same here.

Parks and Recreation! I just rewatched it from start to finish and I love it so much more every time. It makes me laugh, cry and all the sweet relationships are enough to make my heart pop. Ben and Leslie, Leslie and Ann and, of course, Andy and April. THE BEST.

I watch I Love Lucy pretty much every morning. It’s on from 5am-8am every day and I just casually have an episode or two on as I’m getting ready. I grew up watching the show and everyone in my family has seen every episode approximately one million times. If we’re all together and it happens to be on we’ll all stop everything at the beginning of each episode and try to figure out which one it is: “Oh! This is the one where Lucy and Ethel buy the same dress!!” Someone else will chime in with the details and we’ll all start laughing. It’s a predictable and comforting family tradition and I since my family lives far away I guess I like to bring them into my daily routine :)