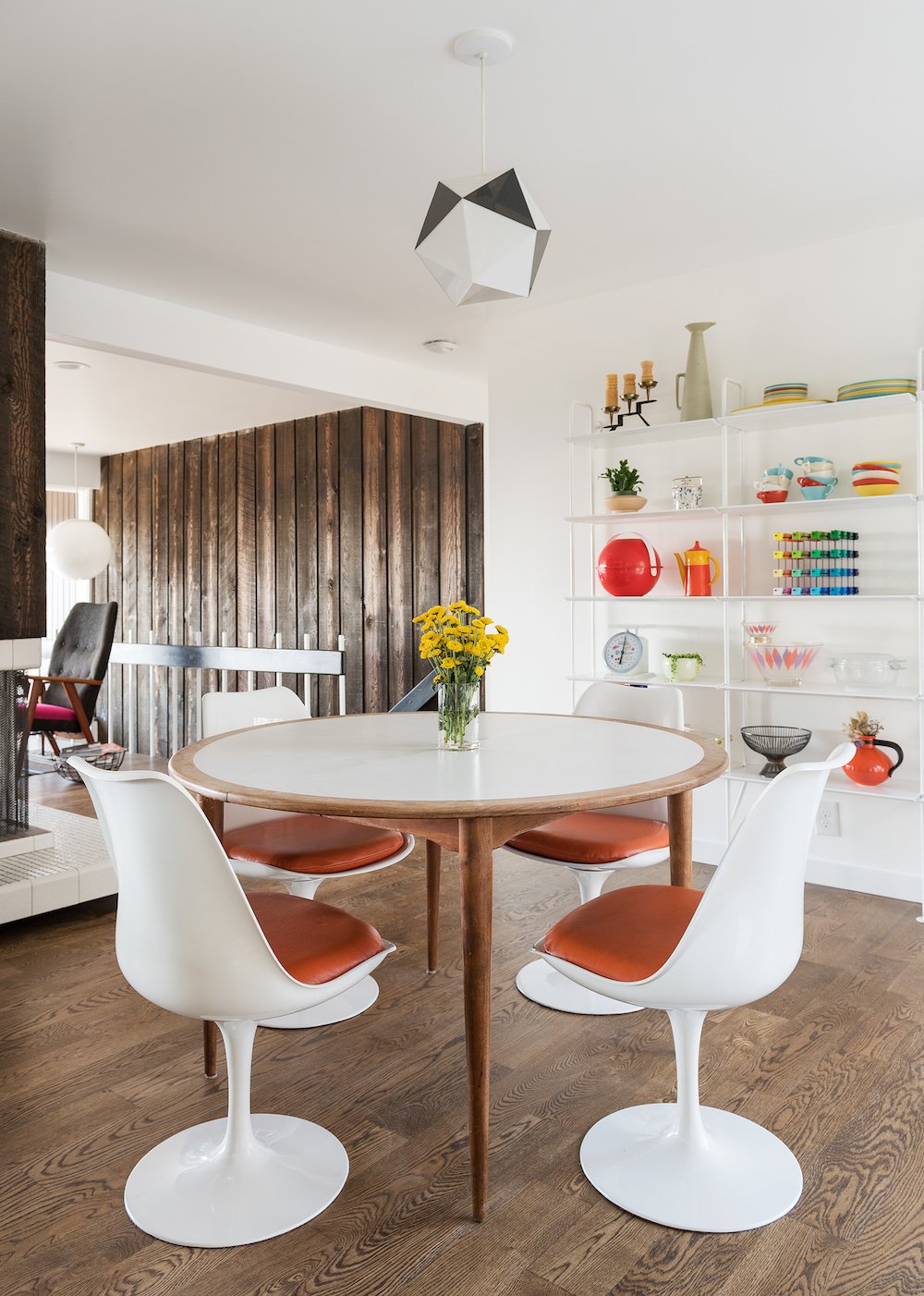 Graphic designers Kelly Sue and Cardon have a passion for all things pre-computer — especially design from the 1950s and ’60s. They live in Salt Lake City with their son, daughter and five chickens (!) in a home that would be any vintage collector’s dream. Take a peek inside… 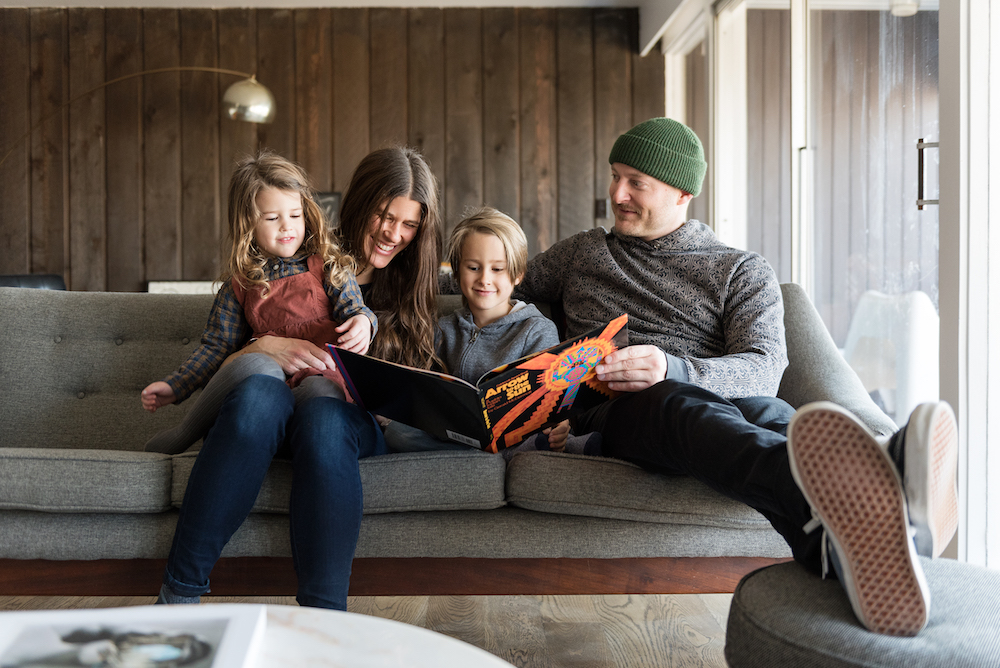 On love at first site: Cardon and I met at Utah State. I was a senior, and he was a sophomore. We started hanging out every day and just gelled. After college, we moved to New York together. We lived in a house in Astoria, Queens, for nine years. Our daughter was actually born in the bathroom because I went into labor so quickly! But we had both grown up out west and talked about moving back. We missed our families and the outdoor lifestyle. So, when an opportunity came up three years ago, we decided to go. It was like ripping off a Band-Aid. 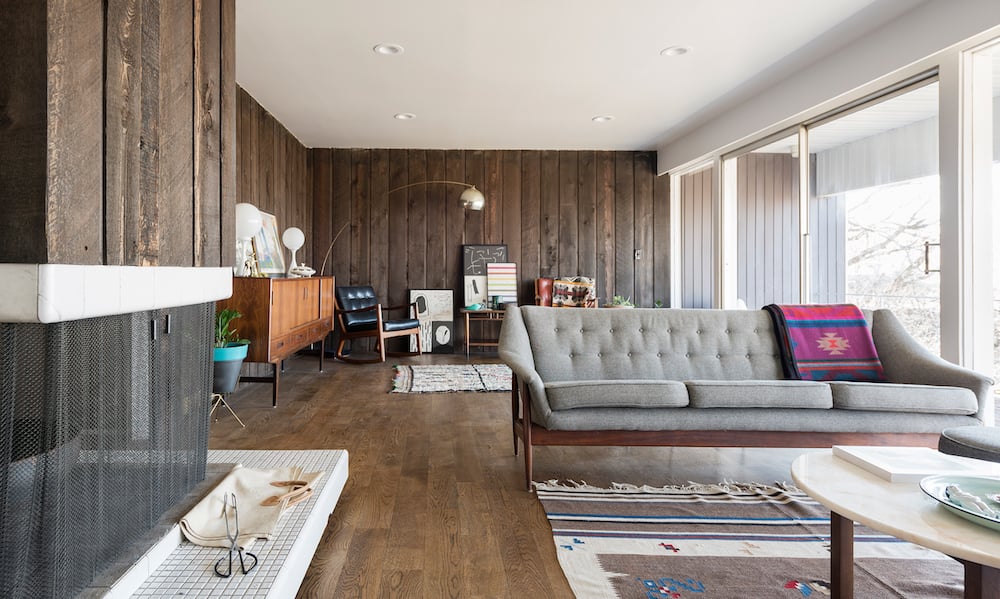 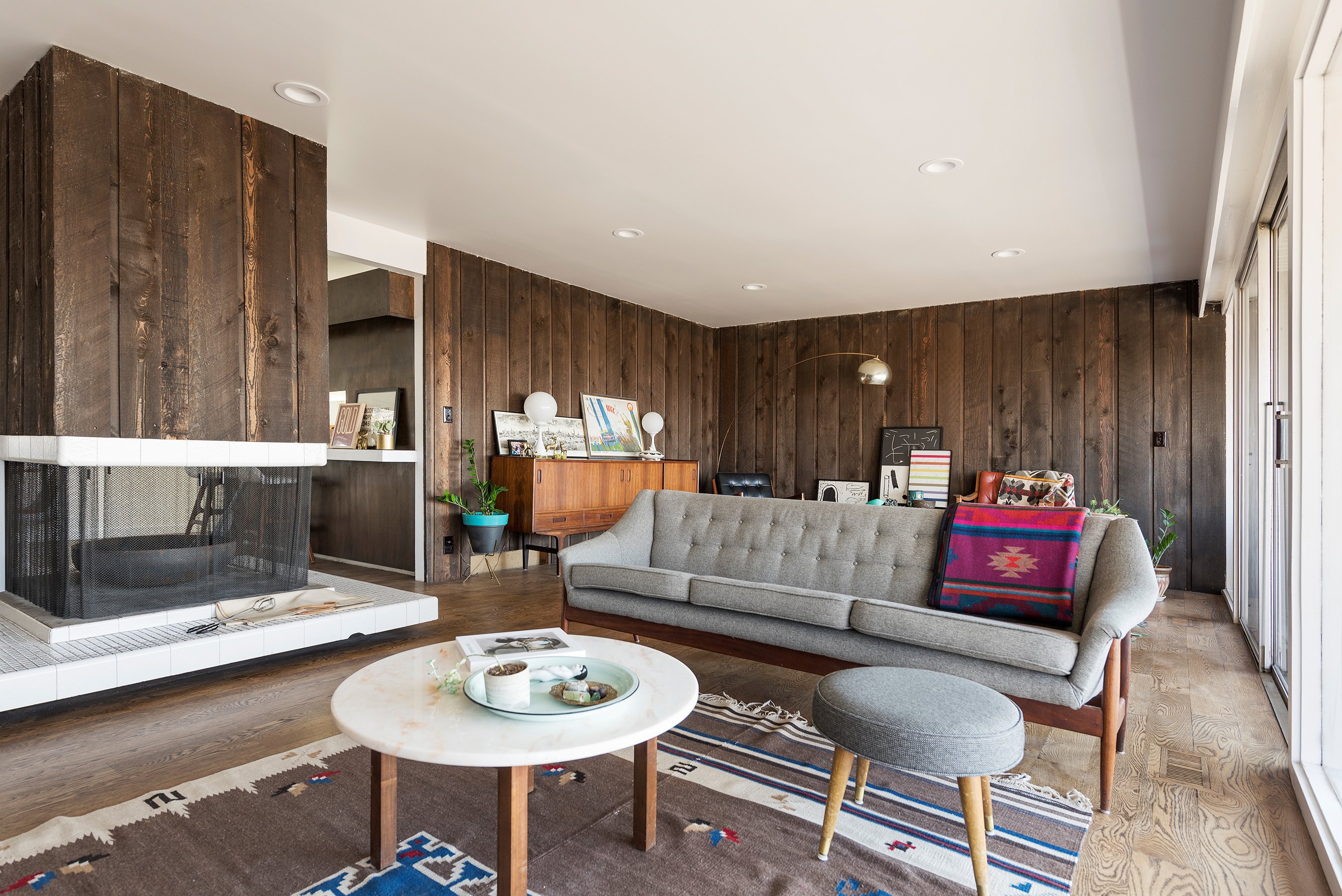 On lucking out: We had been looking for a while when we spotted this house on Zillow. I thought ‘How have I not seen this place?’ My husband is a book jacket designer, and we both love the simple graphics on book covers from the 50s and 60s, like this and this. We’re drawn to anything from that era — including homes. We hadn’t even seen the place in person, but I could tell it was meant for us. I immediately called the real estate agent, but she told us it was already under contract. I was pretty bummed out. But that first deal ended up falling through! We feel really lucky. 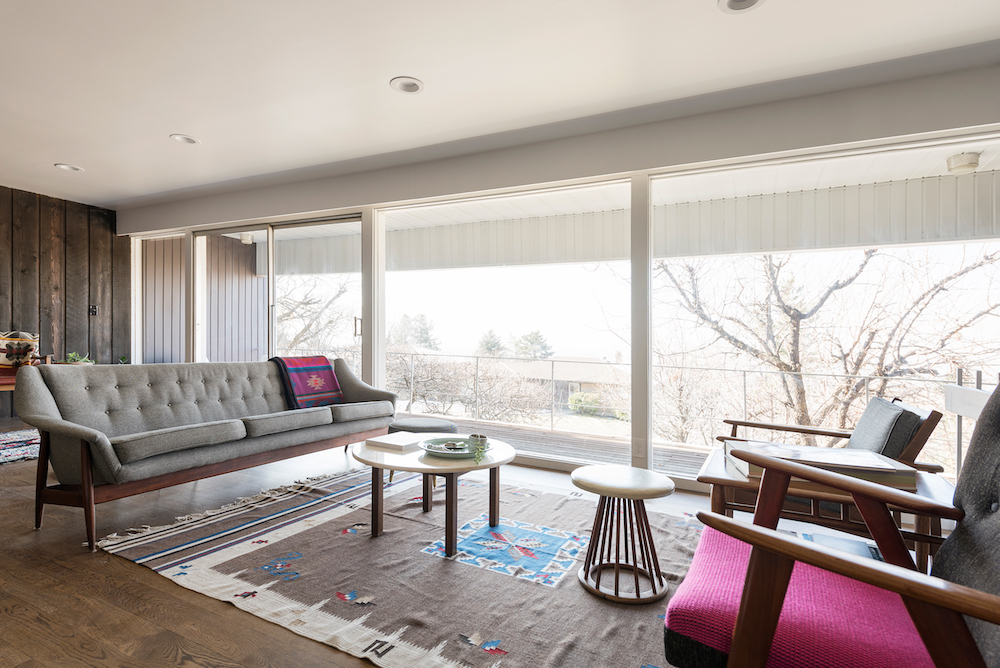 On windows: The windows were a big draw. Our backyard has lots of greenery and trees, and we love the integration of outside to inside — it’s very nurturing. During the day, we rarely turn on the lights. We have an amazing view of the city and mountains, and it’s dreamy to watch sunsets or storms roll in. The only downside is we have to be conscious of what we’re wearing when we’re wandering around. Also, we can’t ever pretend we aren’t home, ha! 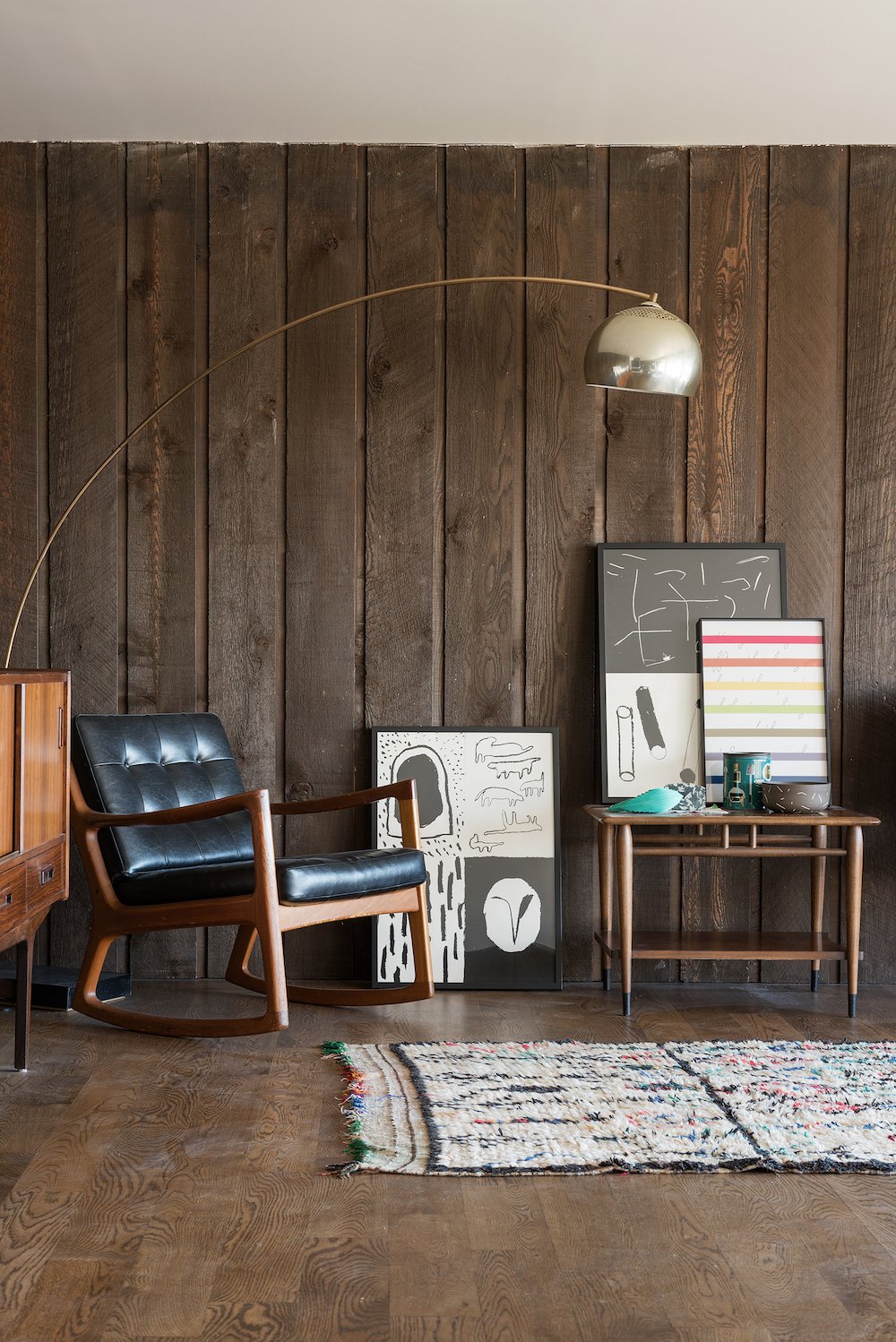 On making changes: The house was built in 1961 in the architectural styling of Marcel Breuer. It was pretty gnarly when we bought it. Shag carpet was everywhere — even in the bathrooms! It has been a lot of work, and we’ve tried to keep the home’s integrity. When we were making changes, the workmen kept asking, ‘When are you going rip all this wood out?’ But we actually love it. We painted all the other walls bright white, and the wood feels cozy.

On kid-friendly chairs: This is my grandmother’s table, but the chairs are actually new. We got them on Overstock.com, and they’re amazing, especially with kids. They swivel, the cushions are comfy, and you can easily wipe them off.

On “treasure hunting”: We go to estate sales every month or two in Utah. I love collecting 1950s kitchenware, which I display on our kitchen shelves. We tell our kids that we’re going ‘treasure hunting’ and that they can each pick out something small. They like it right now, but when they get older they’ll probably be like, ‘My mom drags me around to old peoples’ houses all day and we go through their stuff.’ 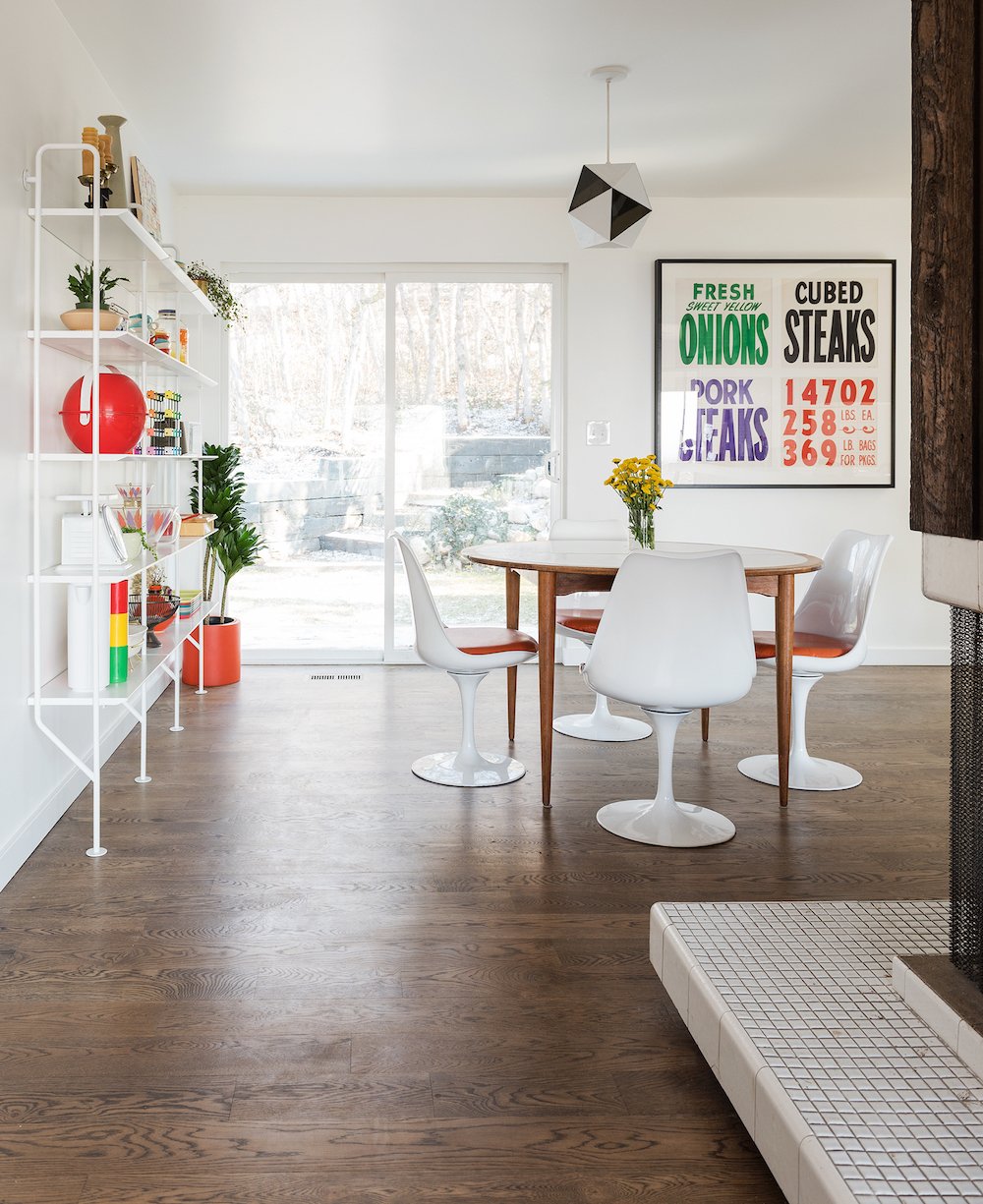 On typography: We found these old hand-drawn grocery signs at the Brooklyn Flea years ago. We were planning to frame all four individually, but at the last minute I decided to do them all together. I was nervous it might be overwhelming, so I’m happy that it turned out well. 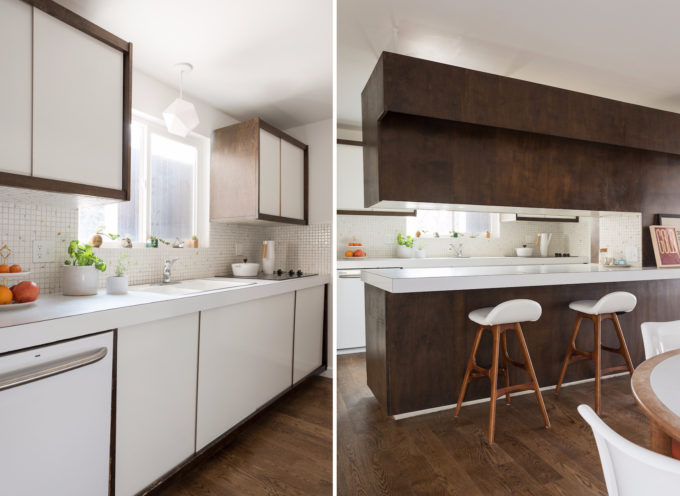 On cooking with the kids: I’m the family chef most of the time. My kids love to help; my son wears my old apron from waiting tables at restaurants a million years ago. They cut vegetables and peel carrots. When we were redoing the kitchen, we got rid of the popcorn ceilings, but kept all the gold-flecked tile. 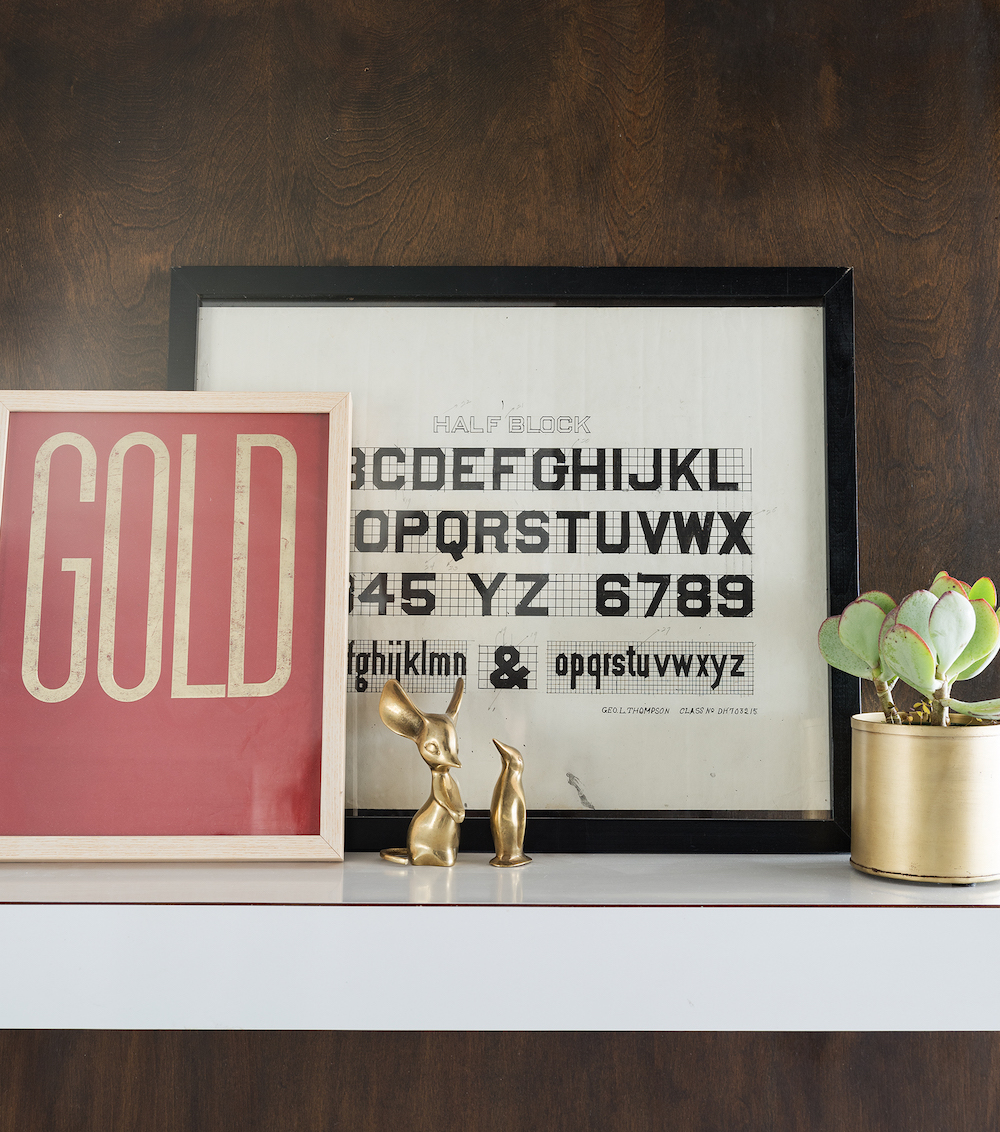 On slowing down: We found this card at a flea market: it’s from a correspondence school in Idaho in 1905. Someone was taking a lettering course, where he or she wrote out lessons and sent them back and forth with the teacher. Nowadays, with the internet, everything is instant — but back then you spent more time on things. There’s something very romantic about that. 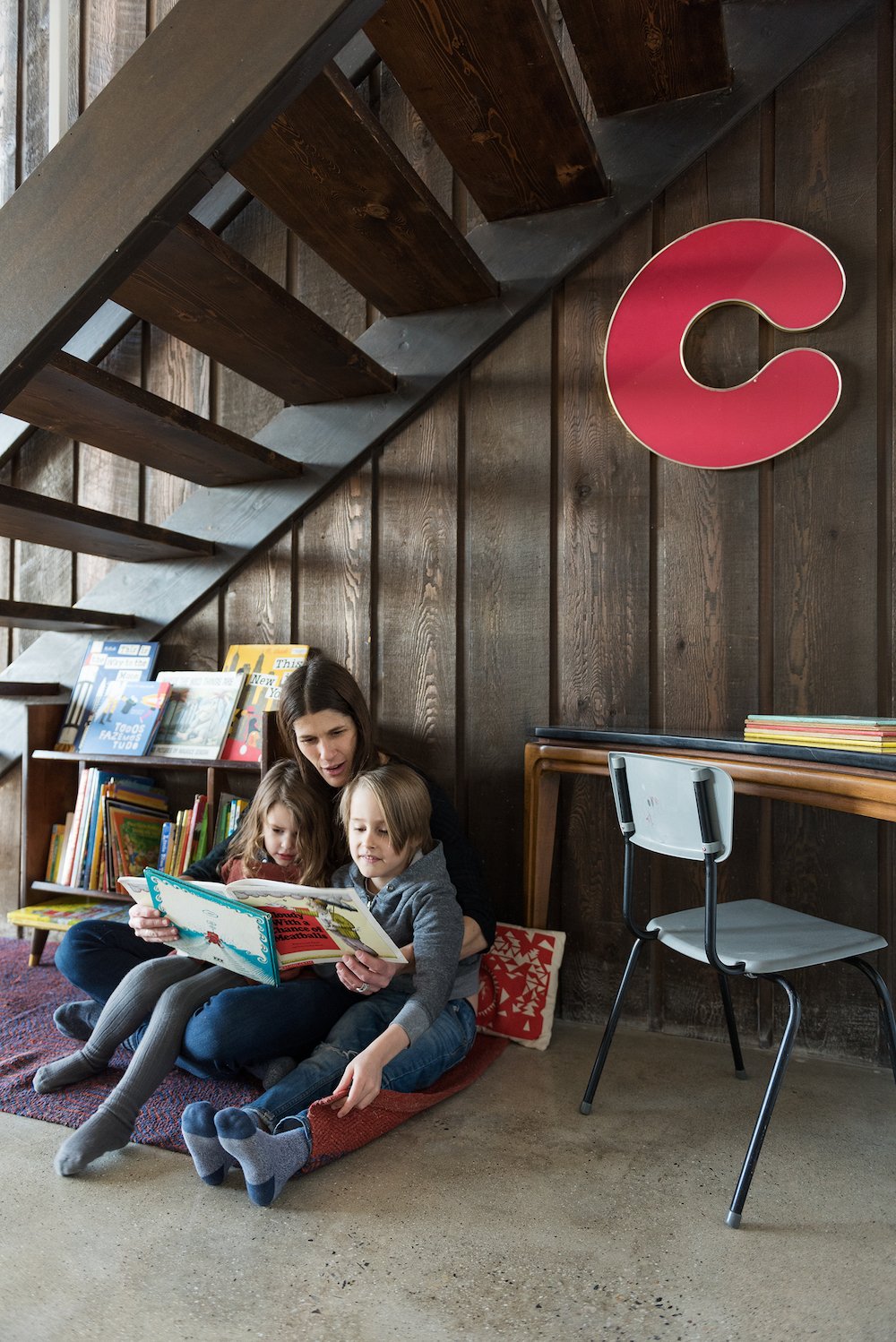 On Dutch traditions: My husband’s family is Dutch; his grandmother is from Holland. We named our son Koos, which is a Dutch name. We always sing happy birthday in both English and Dutch. We also eat a lot of gouda cheese on toast. We have a Dutch store here in Salt Lake City which is fun for us — but most of all, we’re excited to be taking a trip to Holland this August. 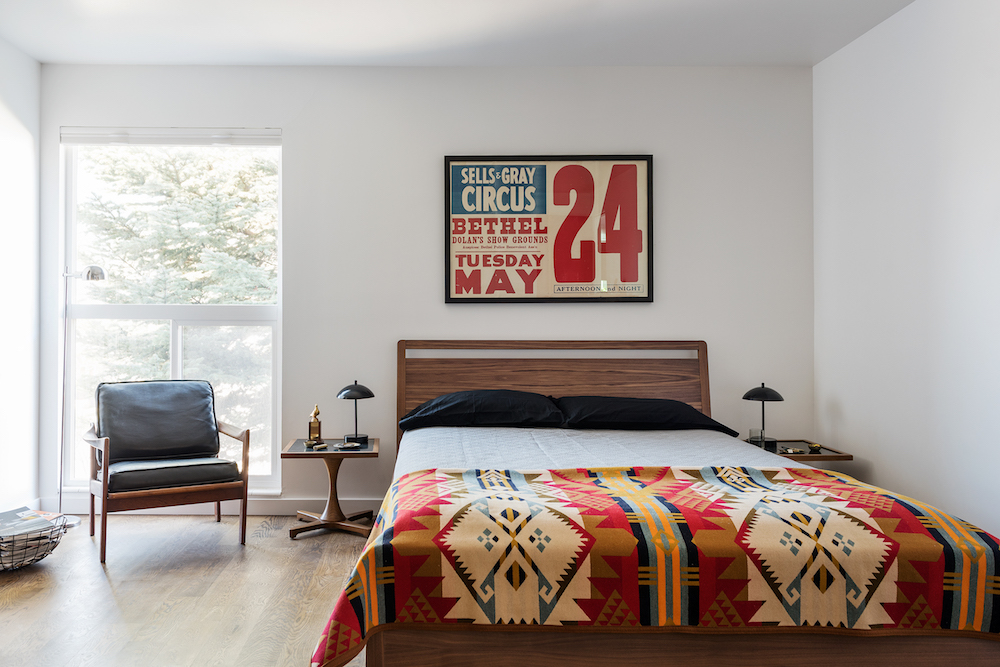 On new things: Most of our pieces are vintage, but the new pieces we have are generally from Blu Dot. They have an outlet run by a guy named Nate. It’s a great way to get nice things at more affordable prices. I contacted him through Instagram, and he was amazing to work with. Since the furniture gets shipped in a huge crate, I saved up and had things sent in bulk — I got the white bookcases in the dining room, a desk, a mirror and this bed frame. 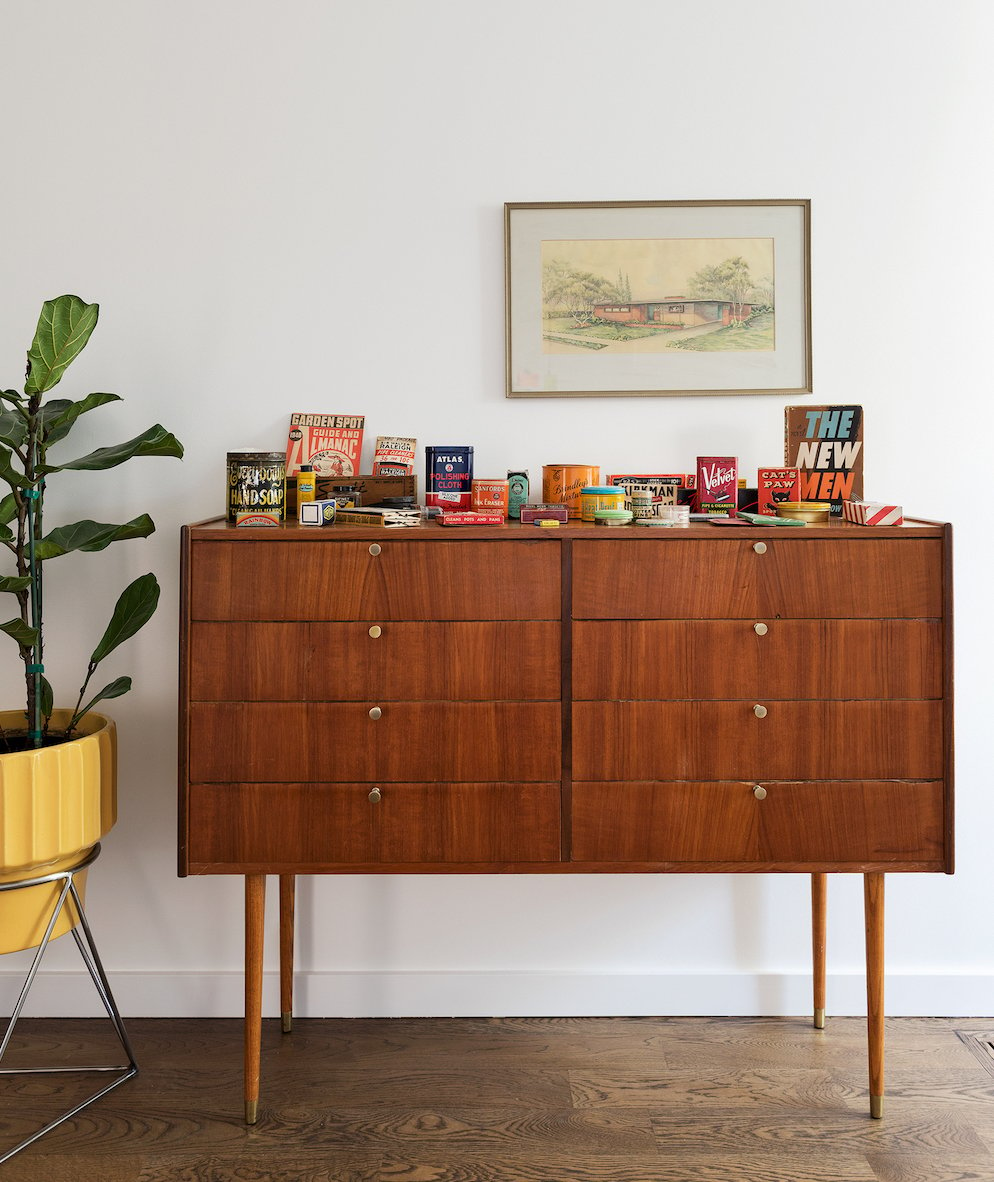 On fun ephemera: This dresser is covered with old advertising ephemera that we’ve collected. We love all the colors, fonts and illustrations. They’re like mini works of art. 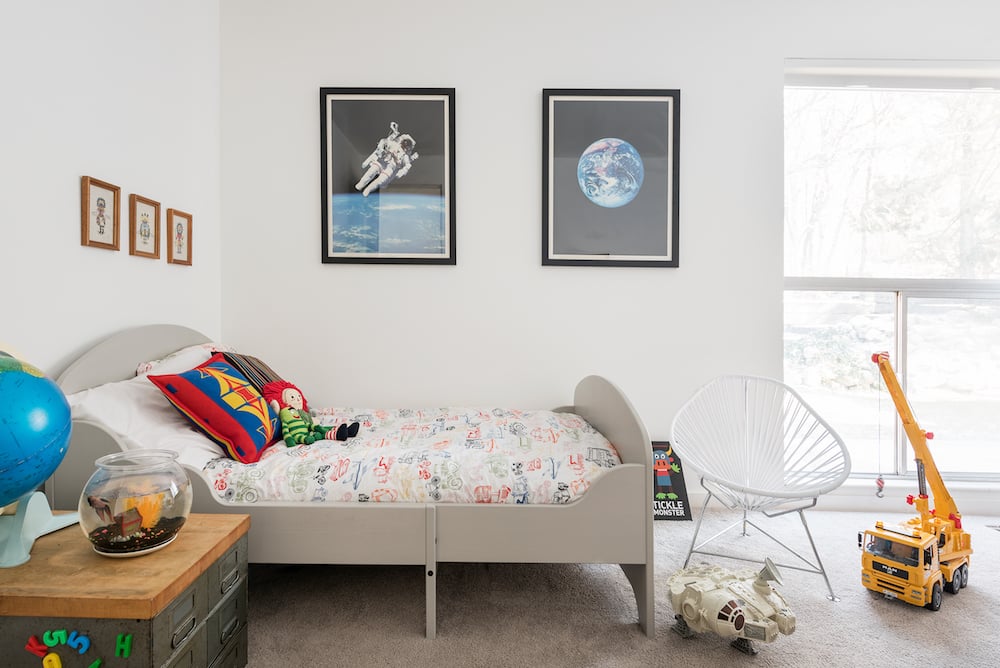 On fish: Both Koos and Cree have beta fish in their room. Koos earned “Ocean” after he potty-trained, and Cree earned “Binki” by, you could guess, giving up her binkis. They’re easy pets; the kids just sprinkle food in their bowls before bed. It has become a nice chore and lesson in responsibility.

On creative kids: Koos loves outer space, volcanoes, dinosaurs, Power Rangers, all those things. And he wants to make art every day. I try to keep art supplies out on the table — paper, stickers, glue, googily eyes — so he can start creating off the cuff. Koos is also really into mazes. He’ll draw a maze of the house, then hide a surprise in a certain spot for us. It’s pretty sweet. 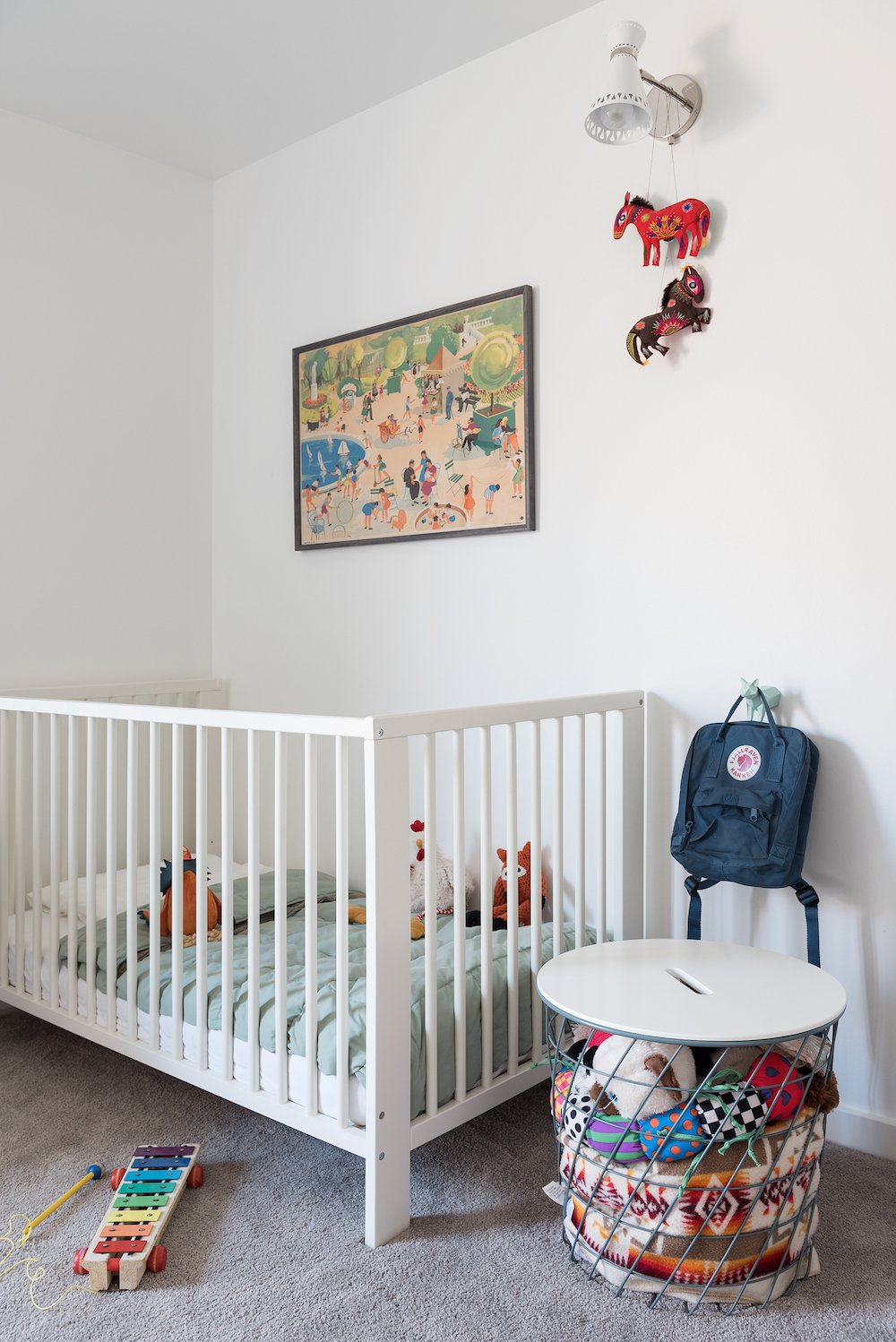 On at-home manicures: Cree is brave and independent and determined to keep up with her older brother. She also loves to dress up and paint her nails. I’m more of a tomboy, but I figured as long as I was her biggest advocate it would be okay. But when she was two-and-a-half, I was helping her paint her nails, and after a stretch of focused silence, she said: ‘You’re not very good at this, are you, Mommy?’ Haha, I had to agree! She now enlists her dad for nail painting, which is very cute to watch. 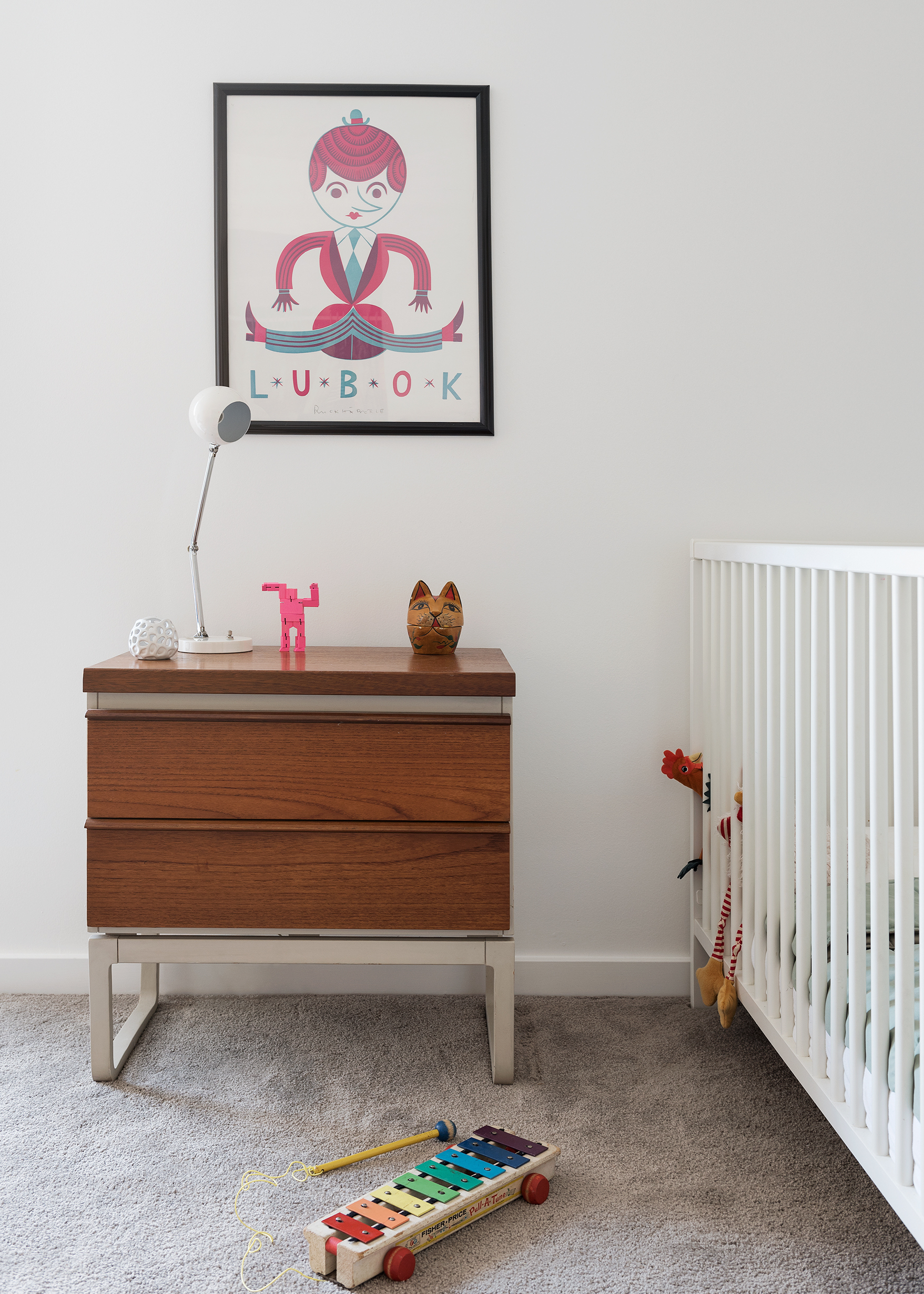 On family hangs: We play a lot of games — the current game of choice is Slapzi. We also do family movie nights. Now that my kids are getting older, I’m excited to watch things like Goonies. My daughter is still sensitive, though. Older movies always seem to have a scary character that I never remembered being scary! 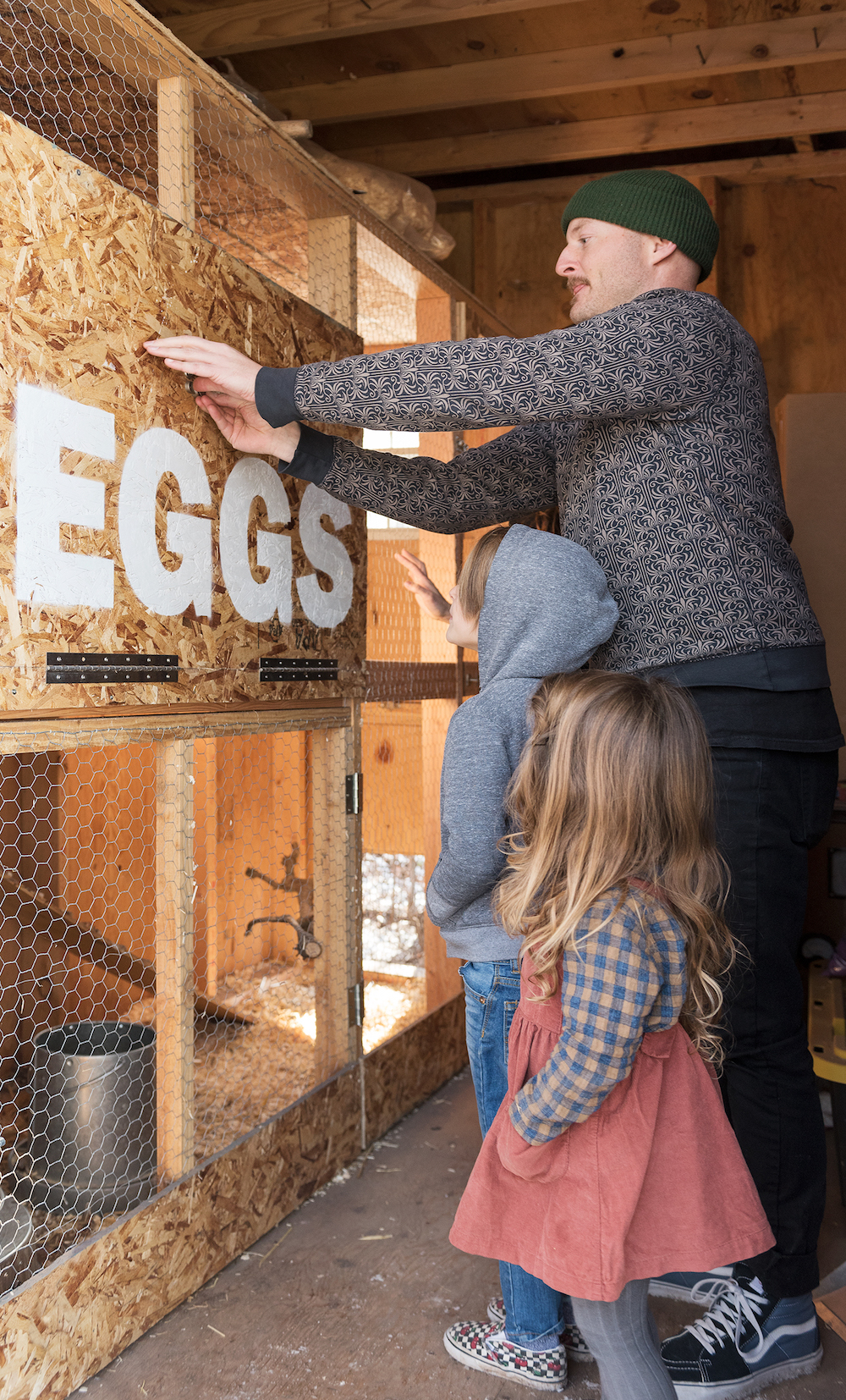 On chickens: You hear about dog or cat people — we’re chicken people. Neither of us had chickens before, but last year, my husband and the kids came home unannounced with some baby chicks. We had a shed in our backyard that we converted into a coop and run. The chickens explore the yard, hunt and peck, and wander over to say hi to our neighbors. When it gets dark, they simply put themselves to bed. Amazing, right? They eat feed and also love our table scraps — especially cottage cheese and watermelon. They’re so much fun, my kids hold them all the time and pet them like cats. 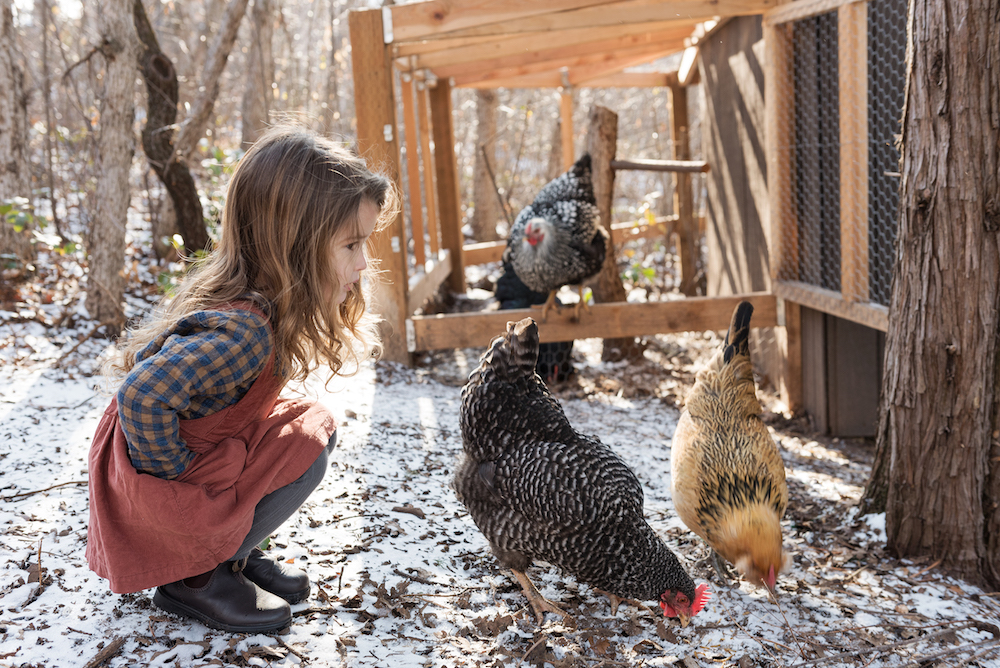 On fresh eggs: All the chickens are different breeds that lay different colored eggs. We get a blueish green egg from Sunshine, a light brown from Tiny Boots, medium brown from Little Foot, a dark chocolate brown from Root Beer and a white egg from Graham Cracker. All the yolks are a much more vibrant yellow than store-bought eggs, and they taste so much better! The kids love collecting the eggs each day and it’s nice to always have them on hand for eating, baking or sharing with neighbors. We love making fried eggs on toast. 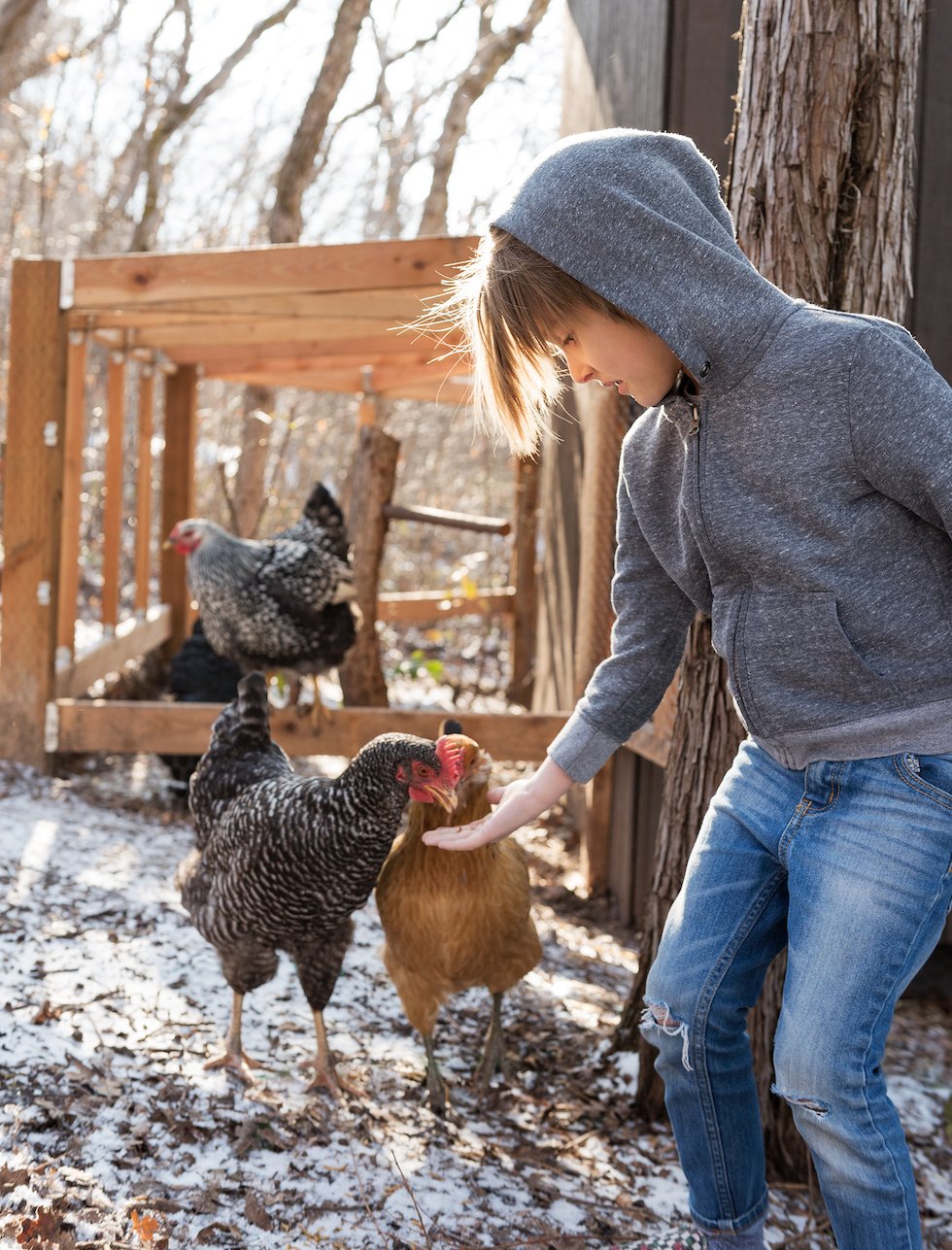 On life in Utah: We love living in Utah! Utah is home to five national parks (Arches, Canyonlands, Capital Reef, Bryce Canyon and Zion), and we try never to take it for granted. In the winter we ski and snowboard, and in the summer we take day hikes, camping trips and rock climbing in the nearby canyons. So many of our friends are bikers and are constantly hounding us: ‘When are you going to get a mountain bike?!’ So we’re picking up mountain biking, too. 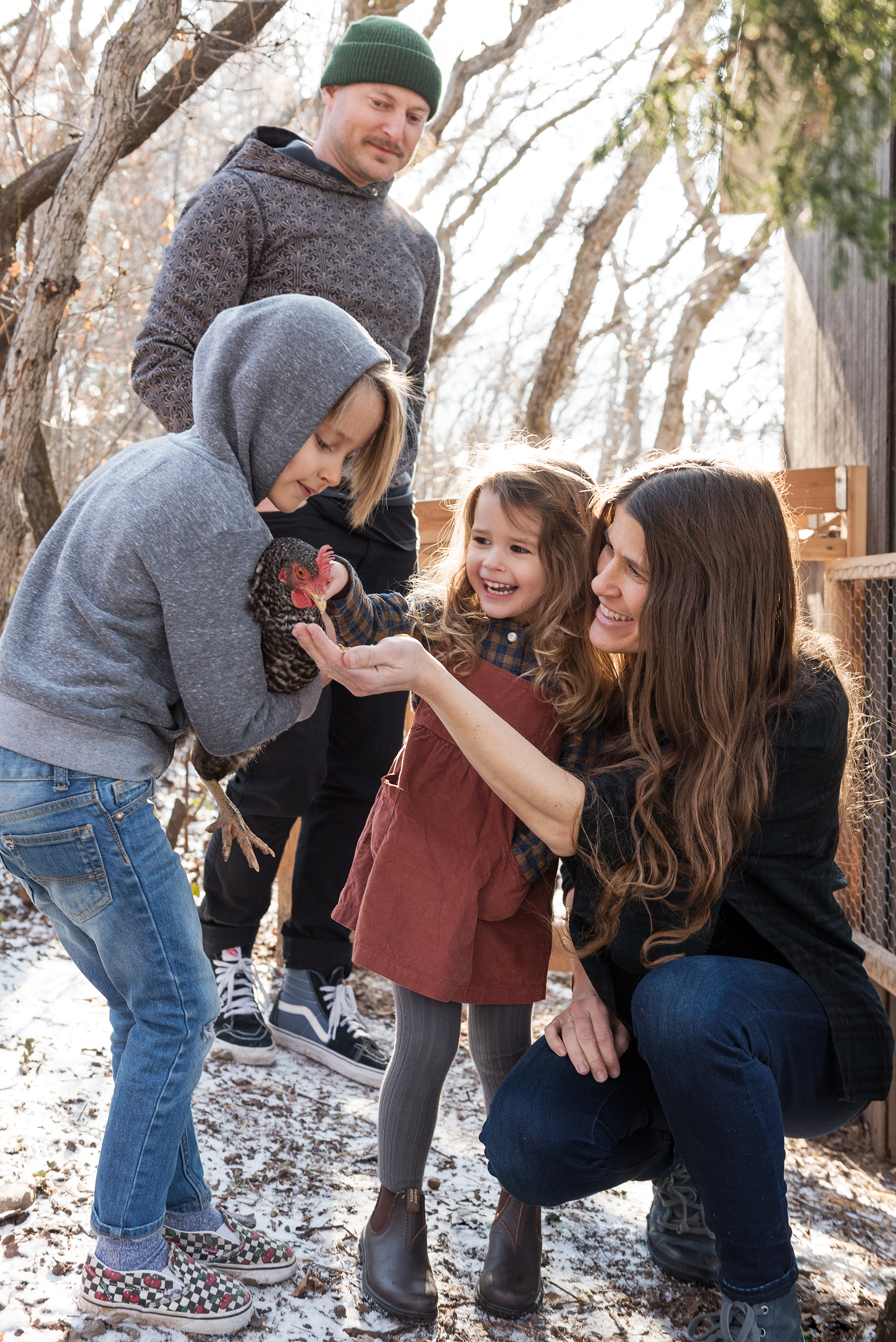 Thank you so much, Kelly Sue! Your family is lovely.

P.S. More house tours, including an breezy San Francisco home and a modern house in the Japanese countryside.

(Photos by Lucy Call for Cup of Jo. Interview by Megan Cahn.)

By Joanna Goddard
Design
This New Zealand Apartment Welcomes You With a Bright Yellow Door
April 10, 2019