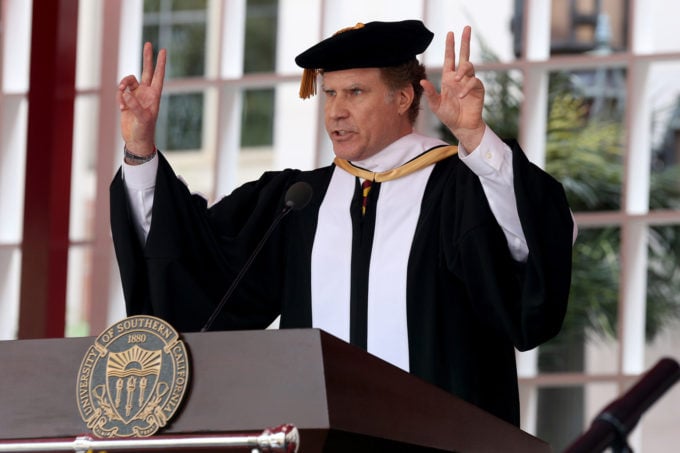 What is it about graduation speeches? No matter what stage of life you’re in, there’s no better pep talk. And this year’s crop is particularly great — by people like Will Ferrell, Octavia Spencer and Mark Zuckerberg. So, in the spirit of the season, here are eight wise quotes…

“There were many a night where in my L.A. apartment, I would sit down to a meal of spaghetti topped with mustard, with only $20 in my checking account… Yes, I was afraid. You’re never not afraid. I’m still afraid. I was afraid to write this speech. And now, I’m just realizing how many people are watching me right now, and it’s scary. Can you please look away while I deliver the rest of the speech? But my fear of failure never approached in magnitude my fear of what if. What if I never tried at all?” — Will Ferrell to University of Southern California

“Some of you began writing a paper one night, and maybe you woke up self-conscious about what you wrote, perhaps a little ill at ease. So you challenged yourself to write a completely different piece, a piece that was more you, more of what you needed to say. You found your voice. Let me tell you this. Keep chasing those moments where you discover something new about your voice. Don’t ever let that end. Keep your minds and hearts open to life’s endless and unforeseeable possibilities. And filing in those ‘you’ details, you also chose who would be a part of those vignettes and stories in this chapter of your lives.” — Octavia Spencer to Kent State

“Jane Austen threw out the plan for a well‑read regency‑era woman. Frank Lloyd Wright threw out the plan for a young architect of his time. Bill Gates, Oprah Winfrey, Enrico Fermi, Lin‑Manuel Miranda, Martin Luther King, Marie Curie, Pablo Picasso, Toni Morrison, they all threw out the plan. The right answer was safe; the wrong answer, the one no one else came up with or followed or believed in, was transformational. Ah, you say to yourself sitting there, ‘I cannot expect to be Jane Austen or Frank Lloyd Wright,’ but what you can embrace is a life that feels like it belongs to you, not one made up of tiny fragments of the expectations of a society that, frankly, in most of its expectations, is not worthy of you. And that requires courage, not compliance; passion in lieu of simply plans.” — Anna Quindlen to Washington University

“Ideas don’t come out fully formed. They only become clear as you work on them. You just have to get started. If I had to understand everything about connecting people before I began, I never would have started Facebook. Movies and pop culture get this all wrong. The idea of a single eureka moment is a dangerous lie. It makes us feel inadequate since we haven’t had ours. It prevents people with seeds of good ideas from getting started. Oh, you know what else movies get wrong about innovation? No one writes math formulas on glass. That’s not a thing. It’s good to be idealistic. But be prepared to be misunderstood. Anyone working on a big vision will get called crazy, even if you end up right. Anyone working on a complex problem will get blamed for not fully understanding the challenge, even though it’s impossible to know everything upfront. Anyone taking initiative will get criticized for moving too fast, because there’s always someone who wants to slow you down. In our society, we often don’t do big things because we’re so afraid of making mistakes that we ignore all the things wrong today if we do nothing. The reality is, anything we do will have issues in the future. But that can’t keep us from starting.” — Mark Zuckerberg to Harvard

“We are not born with a certain amount of resilience. It is a muscle, and that means we can build it. We build resilience into ourselves. We build resilience into the people we love. And we build it together, as a community. That’s called ‘collective resilience.’ It’s an incredibly powerful force – and it’s one that our country and our world need a lot more of right about now. It is in our relationships with each other that we find our will to live, our capacity to love, and our ability to bring change into the world” — Sheryl Sandberg to Virginia Tech

Plus, three quotes from past years…

“The corollary to carpe diem is gratitude, gratitude for simply being alive, for having a day to seize. The taking of breath, the beating of the heart. Gratitude for the natural world around us — the massing clouds, the white ibis by the shore. In Barcelona a poetry competition is held every year. There are three prizes: The third prize is a rose made of silver, the second prize is a golden rose, and the first prize: a rose. A real rose. The flower itself. Think of that the next time the term ‘priorities’ comes up.” — Billy Collins to Colorado College, 2008

“As you grow, you’ll realize the definition of success changes. For many of you, today, success is being able to hold down 20 shots of tequila. For me, the most important thing in your life is to live your life with integrity and not to give into peer pressure to try to be something that you’re not. To live your life as an honest and compassionate person, to contribute in some way. So, to conclude my conclusion, follow your passion, stay true to yourself. Never follow anyone else’s path, unless you’re in the woods and you’re lost and you see a path and by all means you should follow that.” — Ellen Degeneres to Tulane, 2009

“Life is an improvisation. You have no idea what’s going to happen next and you are mostly just making things up as you go along.” — Stephen Colbert to Wake Forest University, 2011

Any advice you would add? Who spoke at your graduation?

P.S. On kindness, and 15 career tips from smart women.