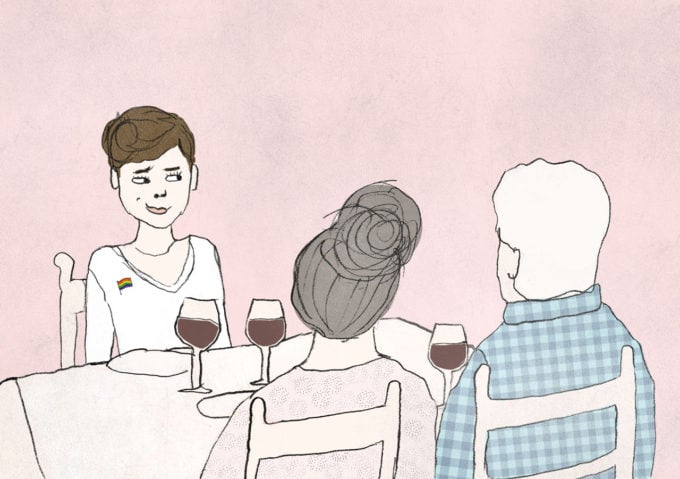 Our series of true dating stories continues with today’s essay by comedy writer Nikki Palumbo. Four years ago, 25-year-old Nikki walked up to her parents and began the most highly anticipated conversation of her life thus far. Here’s how it went…

I came out to my parents on a Sunday evening, standing in the middle of their kitchen.

Earlier that day, we were sitting around the dining table with my sister and her boyfriend, eating Chinese food — a fairly usual occurrence.

My mom and sister were laughing about something. My dad and Dan, my sister’s boyfriend, were having a chat about who knows what — sports, home improvement, history. Whatever they were talking about, they were very much on the same page. But I felt like I was in a different book, the odd one out. Oh, the jig is kinda fucking up.

The jig being my never bringing home, or even talking about, anyone I was dating. Here was my sister with Serious Boyfriend #2, and I still had a goose-egg on my side of the relationship scoreboard. (With siblings, everything’s a competition, whether they’re actively participating or not.)

In retrospect, I had no real reason to keep myself in the closet for so long. My friends knew. Even my sister knew.

My parents were the final frontier, and they didn’t need to be. Sure, you can’t get more traditional than two Italian-Americans from New Jersey, a nurse and an accountant, who sent their daughters to Catholic school. But they had never been anything other than loving, open-minded and supportive. It was my mental block that assumed everything would be different if their oldest daughter swapped out an adjective. Through high school, I’d been their AP student and four-year, two-sport varsity athlete. In college, the overachievement continued with honor awards and societies and degrees in journalism and Italian. Totally normal to have never brought home a boyfriend in that time. I was busy!

For years, I’d hidden behind an Annie Hall Goes to J. Crew appearance — straight brown hair, cardigans and ballet flats — but a few months earlier, I had started shedding that disguise. I cut my hair short and settled into chukka boots. I was on the path to making my outsides match my insides. The same insides that realized I was gay as soon as I learned what gay was.

The last hurdle was to reveal myself to the people who loved me the most. Watching how comfortable everyone was around the dining room table made me want to be that comfortable, too.

I spent the rest of that Sunday mulling it over and went to my bedroom. Soon. I’ll do it soon. Lying there, sleepless, I mentally pulled out my years-long pros and cons list.

Pro: Never again get anxious anytime they ask you if (or whom) you’re dating.
Con: They might be disappointed? But, probably not.
Pro: Get to invite a girlfriend to dinner.
Con: …

The cons weren’t coming as easily as they had in the past. Was I out? Of cons, that is? Seemed like it.

My heart nearly beat out of my chest. This was it. Right now. The straight Band-Aid was coming off. I went searching for my parents and found them in the kitchen, their natural habitat — laughing, barely listening to the TV and digging through the cabinets for snacks. They’re too happy to be judgmental now.

Taking a deep breath, I launched into one of the more nonsensical explanations of my life. A lot of “ums” and “wells” and “ya knows” and even more broken eye contact. There were a few false starts, when I actually considered just going back to bed. But finally, I threw together a string of words that will forever be the words I used to come out. And even then, I couldn’t seem to use the terms “gay” or “lesbian.” Instead, I said to my parents:

“You know how Chrissy has a Dan? Well, I figure I should tell you now instead of just surprising you one day. I won’t be bringing home a Dan. I won’t ever have a Dan. I mean, maybe there’s a 2% chance that I’ll marry a Dan, but I’m mostly just saying that to make you feel better. There won’t be any Dans for me.”

Then we had that moment — that cinematic moment I always thought must be wish-fulfillment for screenwriters — where my parents hugged me and said they just wanted me to be happy. And that, honestly, they had never been quite sure who I’d eventually bring home. (News to me that they also didn’t anticipate any Dans in my life.) And that they’d love to meet the person special enough for me to want to share.

These days I don’t shut up about who I’m dating, and my current girlfriend has made it to two Sunday dinners — and a Christmas. Not only am I finally on the scoreboard, but I feel like I’m winning.

Nikki Palumbo is a comedy writer based in New York. She writes sketch comedy for UCB, Above Average and Funny or Die and she speaks enough Italian to disappoint her nana.

P.S. 10 wedding dos and don’ts, and how long do you wait to sleep with someone?