On Losing a Dad 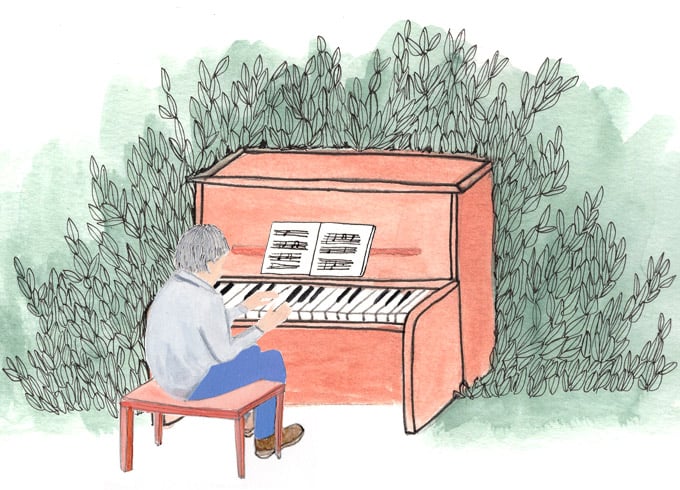 For our ongoing series of personal essays by contributing writers, we’ve been talking about our parents, including lessons they’ve taught and jokes they’ve made. But what about losing a parent? Journalist Katie Beck shares how her world was flipped upside down after her father died…

It’s still painful to think about my dad. It’s been over a year since he died, and although some of the sharpness has receded, I still feel a pang in my chest when he pops into my head. I comfort myself with the hope that losing him has somehow given me a sliver of the compassion he had for others.

He and my mom visited me in Australia right before my son was born, and I asked if I could record him reading one of my favorite childhood books — one that he’d read to me thousands of times growing up.

I thought it would be nice for Frederick to hear his grandfather’s voice between visits, and maybe, somewhere deeper in my subconscious, I wanted to hold onto a piece of him forever. There was a piano in the house my parents had rented and I slyly recorded my father playing it one afternoon. Ever since I was a baby, he had played the same melody, a beautifully haunting tune that he’d composed and never written down.

Now that’s he’s gone, those recordings of his voice reading The Big Orange Splot, and his piano music are so precious to me and simultaneously so difficult to think about. I haven’t been able to bring myself to listen to either.

I went into labor just after sitting down for dinner one evening in my parents’ rented house in Sydney.

I am forever grateful that they were there with me that night and so glad my partner snapped photos of my dad as he held my son the day he was born, his face so full of emotion. But those photos are hard to look at now, too. I have to brace myself before taking in his familiar face bedecked with his signature grey mustache and affable smile.

After he died, I flew home to be with my mom.

In those first few days, in the sleep deprived depths of new parenthood, I was moving through the world in a sort of numb bewilderment.

I kept looking around at the things that were still here when he wasn’t: a jar of his favorite black cap raspberry jam in the refrigerator, the neat little piles of coins on his bedside table, and thinking, “How can that still be here and he’s not?”

The most confounding of these things, was my son, Frederick. He was just two months old when my dad died.

I was struck by a brutally honest question asked by a woman in an online group for moms who have lost their parents: “Do you ever feel like you love your late parent more than your baby?” she wrote.

It’s a jarring thought. Of course not! was my first reaction. But I kept coming back to the question, grappling with how I felt about it.

I’d only known my son for eight weeks when my dad died; by contrast, I’d loved my dad my whole life. I’d had 33 years of unconditional love and support and kindness from him. I’d never imagined a world without him.

It breaks my heart to know that Freddie won’t know my dad, and that my dad only knew him as a tiny, frail, newborn and not the bouncing, joyful little boy he is now. I feel guilty sometimes, for feeling sad that the two didn’t get more time together. I know it’s selfish when I have so many friends whose parents never got the chance at all.

Some people have told me, Frederick is the reincarnation of my dad, that their souls are somehow connected, one passing into the next. I appreciate the sentiment, but I don’t think so.

The two are certainly linked, though. I see my dad in Frederick. His soft, floppy hair and the way he wants to share everything with everyone. One of his first words was “hereyougo,” always said while handing you whatever he has.

I’m still in the midst of this grief. I haven’t come to any grand conclusions yet. But I’m hopeful that I can come to welcome the interconnection between something so sorrowful and something so joyful.

But I hope that as time passes, I will be able to tell Frederick about his grandfather and convey to him the compassion and humor that he possessed. I hope that one day Frederick will love hearing the Big Orange Spot in my dad’s deep, gravely voice, and that his beautiful piano melody will become as familiar and comforting to Frederick as it is to me.

Katie Beck started out as a producer for BBC News before quitting her job to travel. She now works as a freelance video journalist and writer splitting her time between Portland, Oregon, and parts unknown.

P.S. A mother’s mantra, and how to write a condolence note.