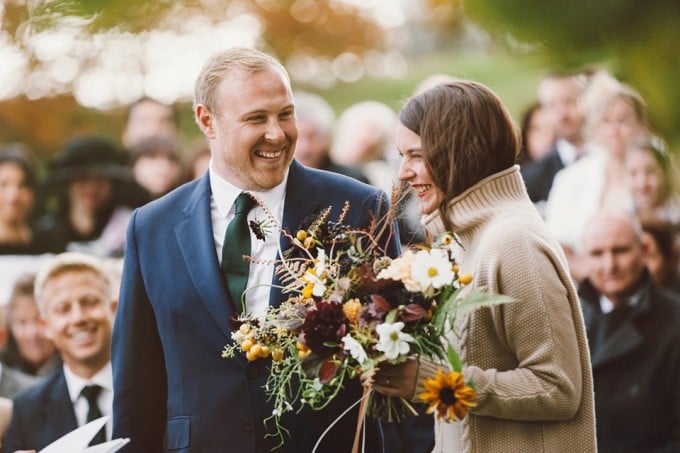 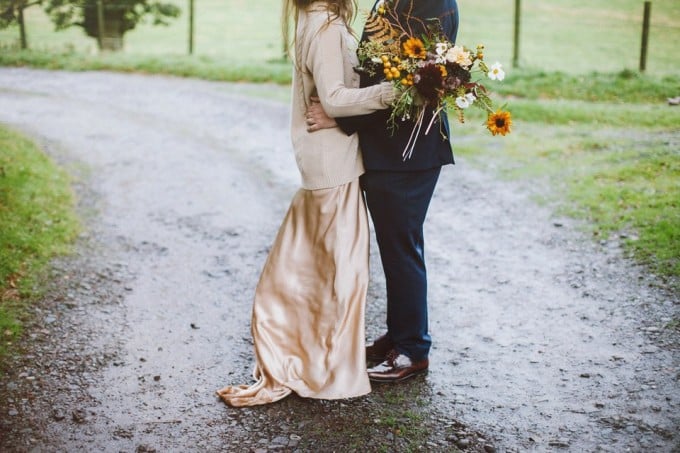 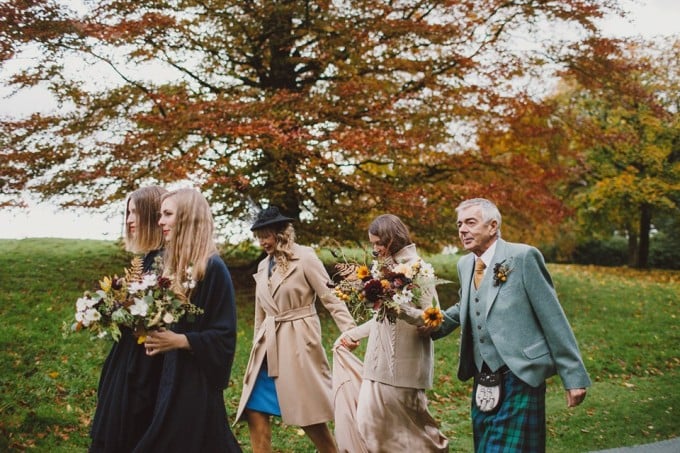 What kind of wedding dress would (or did) you wear? I went for a silk halter dress from J.Crew, which made me feel like a ballerina, and I love how brides these days can find a dress (or overalls!) that suits their personal style. Here are eight brides’ lovely looks…

The bride, above, wore a silk dress and turtleneck sweater to her wedding in Scotland. “I felt like myself, I could breathe,” she said. “The jumper was about keeping me warm. But it also served as a security blanket.” 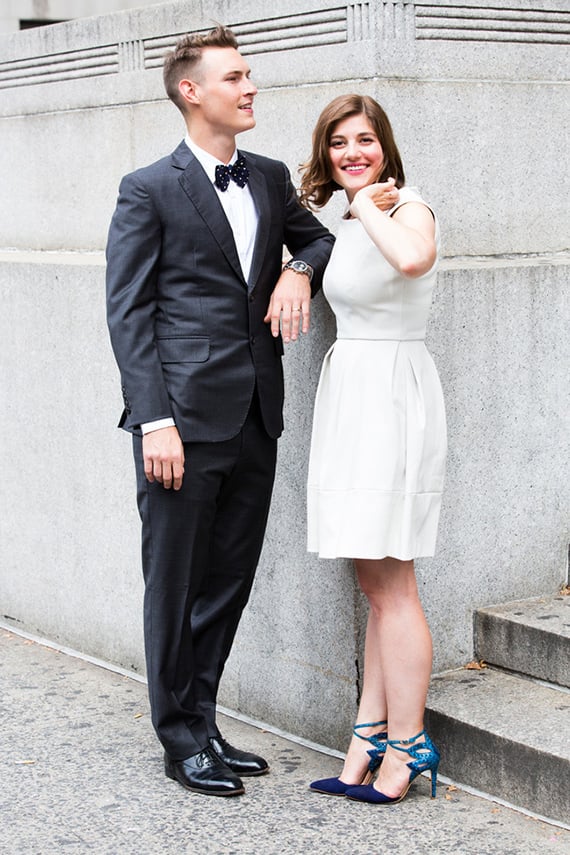 “I wanted a short dress with a sixties vibe, and I loved this leather one by Kaelen,” says Erica Cerulo from Of a Kind, who got hitched at City Hall in New York. “I wore it to our small ceremony in New York, and also to a party we threw for friends in Chicago a year later. The dress felt very me, but not something where my parents would look and say, ‘Wait, what’s happening? You’re doing what now?’ I’m thinking of getting it dyed gray now, which would make it super wearable.” 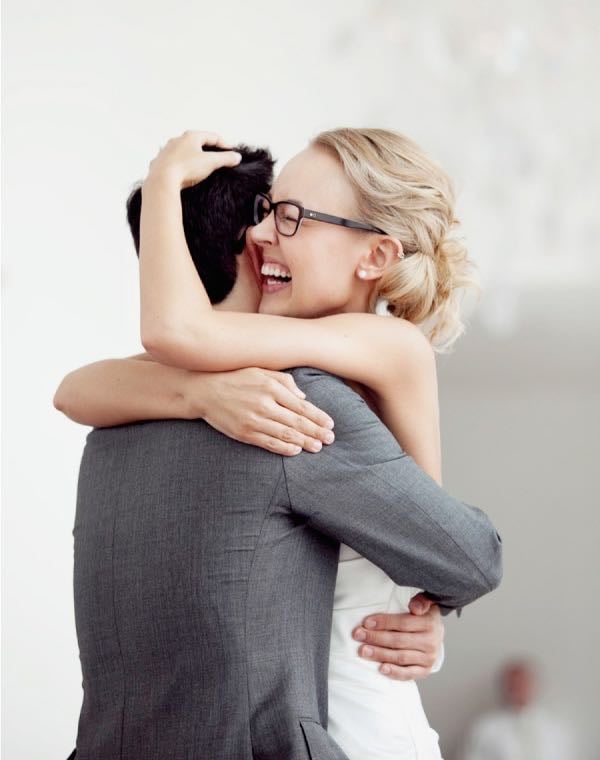 This adorable bride, Nicole, wore glasses to her wedding at the Walker Art Center in Minneapolis. 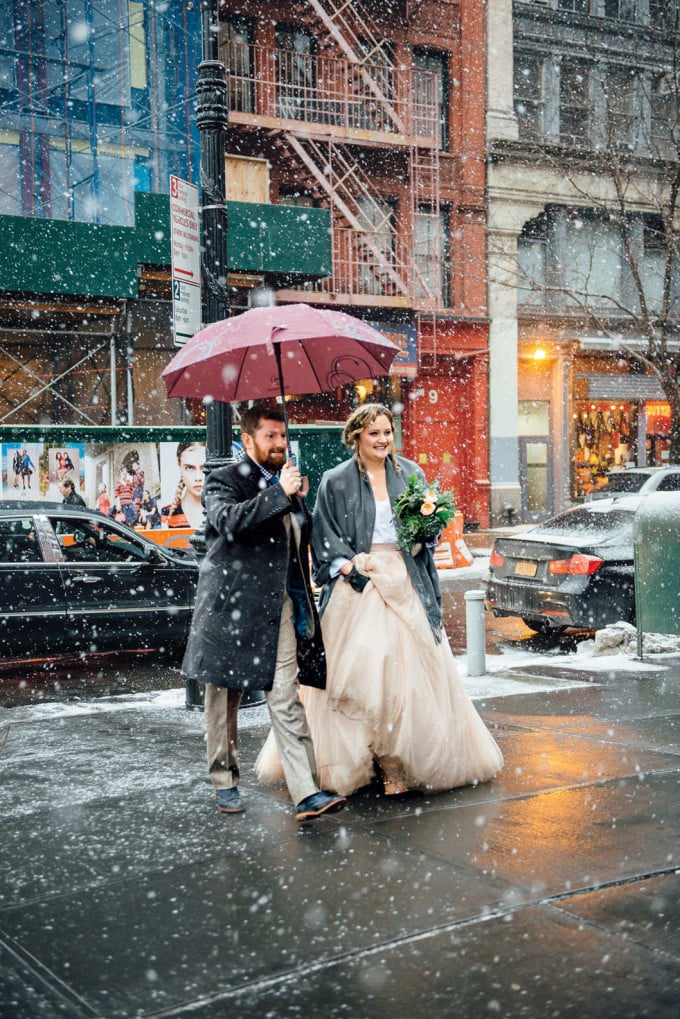 This couple, Nora and Gerard, got married on a snowy Valentine’s Day in New York. Relatives flew in from Ohio and Ireland for a nine-person ceremony and a steak dinner at Lafayette. “The cold weather felt very Irish,” says Gerard. “People stopped us on the sidewalk to congratulate us,” says Nora. “They were honking and clapping.” Nora’s pink skirt is from Watters, and her top is by Tibi. 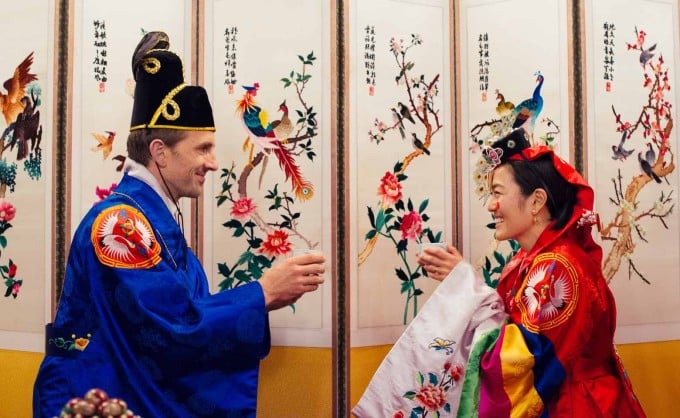 “We had a traditional Korean Paebaek ceremony at our wedding,” said Jenny, a designer from J.Crew, who changed from her sleek white dress into traditional Korean attire. “Our parents threw chestnuts and dates into my apron, which signifies how many children we will have. It turns out that Tim’s parents both have pretty good throws, so we’ll be having ten children — six boys and four girls! I had to close up the apron to prevent any more from getting in!”

“Ana was my neighbor in Brooklyn,” says Amy. “When I first met her, I thought she was sweet and mellow. She casually mentioned she was a musician, and I was like, ‘Uh, huh, sure you are,’ because I tend to be judgmental like that. But then one weekend, I asked her to bring up her guitar from her apartment and play a few songs. I was a goner at that point.” When they got married in New Mexico, Ana wore a white suit with a black button-down shirt, and Amy wore a bridal gown in Champagne satin. 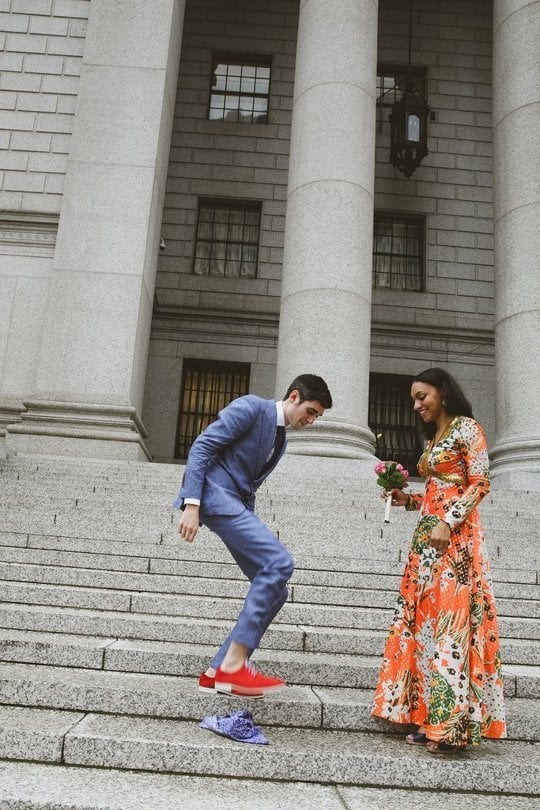 Sophia and Isaac met their families at City Hall, where they did two wedding traditions: the jumping of the broom and the breaking of the glass. Her beautiful orange dress is vintage.

P.S. A casual NYC wedding, and 15 wedding dos and dont’s.

(Thank you for the turtleneck tip, Dienesa! Photo of bride in the turtleneck by Christopher Currie, via Love My Dress. Erica by Jamie Beck. Bride in glasses by Olive Juice Studios, via Style Me Pretty. Pink skirt photo by Sandy SooHoo, via New York. Amy and Ana by Leigh Miller via Stone Fox Bride. Sophia via Style Photo New York.)

Tags: wedding advice
129 COMMENTS
WRITE A COMMENT
Relationships
most popular
01
Seeing My Body With Fresh Eyes
02
11 Wedding Dos and Don’ts
03
How to Write a Condolence Note
04
On Sexual Harassment
05
How to Be a Better Listener
Subscribe
Login
129 Comments
Inline Feedbacks
View all comments
Janna

I love that these are so unique!! I think it is so important to show off your personality in your wedding dress :)

I wore a $200 red formal dress I bought online. I couldn’t imagine wearing white as I never ever wear white so this felt more me.

Hi Joanna! It’s Nora, bride #4 featured in this gorgeous story! Hooray, loved seeing this. =) I have long loved Cup of Jo, such a treat to see us here! Thanks! Ger and I are following up our civil ceremony with a wedding celebration this summer in Ireland with family and friends. I’ll be wearing the same skirt and it’s so rich in sentimental value, I can’t wait to wear it again!

Love those dresses, they are all so unique in their own way. Wish I were that daring on my own wedding, it’s so simple and crazy at the same time!

I LOVE the idea of wearing something that’s not typical, but not too far in left field either. I think I like the idea of separates. It just seem more comfortable.

Got married 8 months ago, I only had one week, to plan our wedding so I ordered this dress from ASOS http://www.asos.com//ASOS/ASOS-SALON-Cami-Strap-Embellished-Maxi-Dress/Prod/pgeproduct.aspx?iid=5112670 and neon sandals to add a little something to it… I though I would recent not having a big wedding, but looking back today it was the perfect ceremony, It’s the sweetest memory and I’ll cherish it forever

I hung on to the old tradition of a white dress but with a slit! ;) I also had on a red cheongsam for the chinese tea ceremony which I love <3

I made my dress, cream colored cotton with a little puckery texture to it. It was a Vogue pattern, square neckline and a tiered skirt. I put a rose bud in my hair-I was 19 years old. I married a guitar player and we have been so happy for 40 years!

What a sweet story.

Love your story, Carol. I made my dress, too, of cream coloured cotton gauze. I embroidered a bouquet of daffodils and forget-me-nots on the bodice, which I dyed pale blue. A Butterick pattern, long sleeves, ties to the back, & the fabric cost $10.00! I was also 19. That was in 1975 – still in love!

no mention of Erica Cerulo’s shoes? they steal the show! can we get some deets on those, please?

I love these different styles! The year was 1986. I wore a white, tea length, long sleeved dress with lace on the bodice by Jessica McClintock, bought off the rack. My “veil” was a hair comb with fabric flowers and pearls. My bridal bouquet was 3 white roses with baby’s breath and ferns sprigs.

I just referenced the City Hall Overalls wedding the other day, so happy to see it pop up again! It’s my absolute favorite.

i love wedding posts. while i lean towards very traditional details, i love seeing how people really add in their personalities to their special days

I wore a full-length, sleeveless, Calvin Klein ivory sheath dress with a deep v-neck. After it became clear that a dress that was being custom-made was not going to work out – just three weeks before the wedding – I was in a slight panic. After a marathon web search, I found exactly what I had in mind at Macy’s. I ordered three sizes – just to be sure – one of which fit perfectly, no alterations needed!

My husband and I decided to go with a red and white theme to symbolise Polish and English flags and I decided to wear a red strapless dress. It was so difficult to find it then but I managed to find one I really liked. I was going to get changed to a short dress for the evening but loved my gown so much that ended wearing it to both day time and night time.

This is so cute, I love all of the unique styles
xo
http://www.laurajaneatelier.com

I wore a strapless tea length white dress w/ olive/golden stripes from Anthropologie for my ceremony (that I got on clearance!) And then I wore a blush and gold maxi dress from ModCloth for my reception. Wearing a big formal dress sounded uncomfortable to me. Although I did covet a Carrie Bradshaw style tulle skirted ballet backed dress from BHLDN for a time.

i LOVED my wedding dress. after trying a bunch, i decided to have one made and luckily my mom had a friend who could do it. it was long sleeved, fitted (in a comfortable material), and backless. like the white version of hilary swank’s oscar dress. the pictures of people seeing the back as i walked down the aisle are priceless!

I’m getting married in October and am wearing an ecru jumpsuit with a removable bandeau, for a simple ceremony to reception transition. I never feel comfortable in dresses but live for a jumpsuit. I’m so excited to wear something that feels like me, and a piece I’ll enjoy over and over again.

I had a custom dress made, and it ended up way cheaper than anything I could’ve bought. Six years ago, there were slim pickings when I was looking for a shorter dress. I ended up with exactly what I wanted, and knew nobody else had the same one. I chose plain cotton with a swiss dot detail at the bottom, so I’m sure the inexpensive materials helped the bottom line. You can see it here: http://snippetandink.com/real-wedding-brittany-michael/

I didn’t elope, I had two weddings (to the same man) actually, but unfortunately my family couldn’t be at either one. You see my husband is Chinese and we got married in Northern China which is really far from home (Delaware). Our first wedding was a church wedding in white and our second wedding was a traditional Chinese wedding. In China it’s common practice to have at least two dresses one for the ceremony and one for the reception. So I had a grand total of 4 dresses, one simple white dress I altered myself, a blue one I borrowed and two tailor made in red silk one qipao and another skirt & blouse combo.

You can see some pictures and a video here http://lorianali.blogspot.com/2016/03/multicultural-wedding.html

I love the rose quarts feather skirt one of my brides eloped in at the Chicago Courthouse paired with a croptop. Sasha, a Russian dancer married her sweet heart, Chris just a few days before Christmas. It was a total dream . They first met on a cruise ship … her dancing and him singing and their elopement feels every bit that moment.

My husband (then fiancée) found my dress on the clearance rack at Marshall’s. It was a halter top trimmed in black lace. It cost $30 and fit like it was custom made for me and my personality! I love it! :)