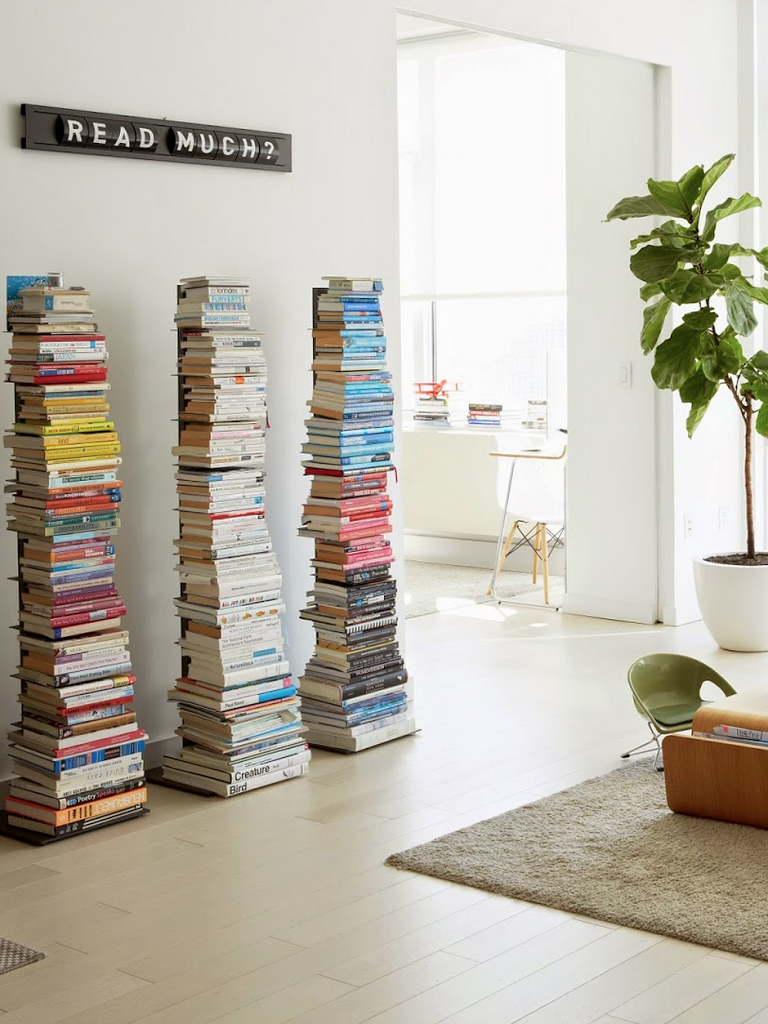 Designer Tina Roth Eisenberg—also known as Swissmiss—is a force. She spends her days running the temporary tattoo brand Tattly and lecture series CreativeMornings. But at night, she comes home to this bright and charming Brooklyn apartment, which she shares with her husband and two kids. Here’s a peek inside… 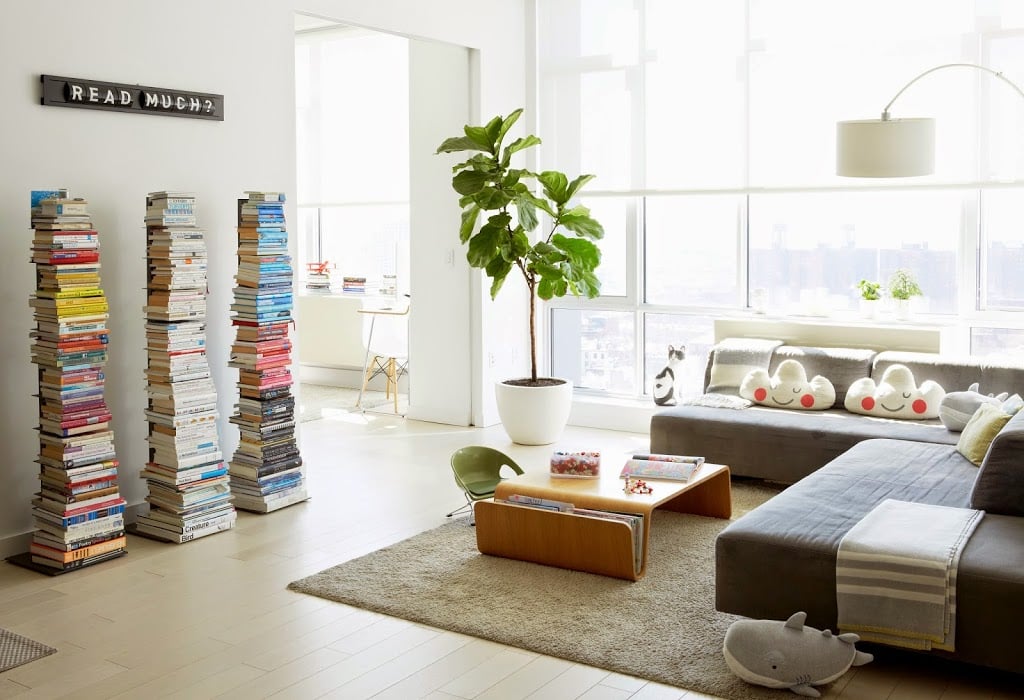 On creating the perfect space: We originally bought two apartments—a two-bedroom and a one-bedroom—and combined them into one. We lived in the unfinished apartment for eight months while we did the construction. We didn’t have a kitchen until the very end. I would never do it again, ever. I’m surprised we’re still married, haha. At the time, we had a one-year-old and a five-year-old, and you can only do so much with a rice cooker and a tiny fridge. We ordered food almost every night. Ella, my daughter, got used to announcing, “The food man is here!” When we finally had a kitchen again she was like, “Where is the food man?” 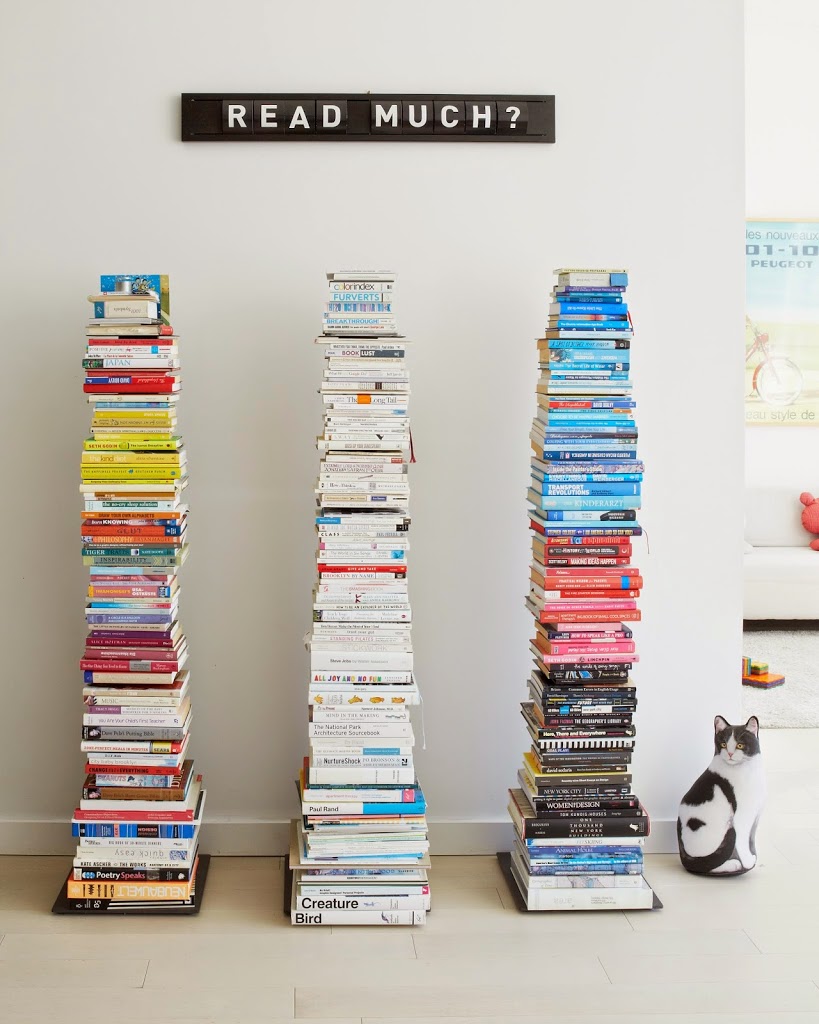 On keeping a “to-read” list: I have a never-ending list of books that I want to read one day. It’s based on recommendations, either from friends or people I know professionally. I’m a quote junky, so if there is a topic on my mind, like “resilience,” I’ll search for quotes and then go down rabbit holes and end up buying a lot of the books that the quotes are from. That’s how I found the book Give and Take, which is such a good read. It analyzes different personalities and how they manifest in professional environments. I’ll read several books at a time, I’m a total ADD reader. Right now I’m reading The Life-Changing Magic of Tidying Up. I just read and loved Small Giants, about small companies where it’s not about scale, but about impact. 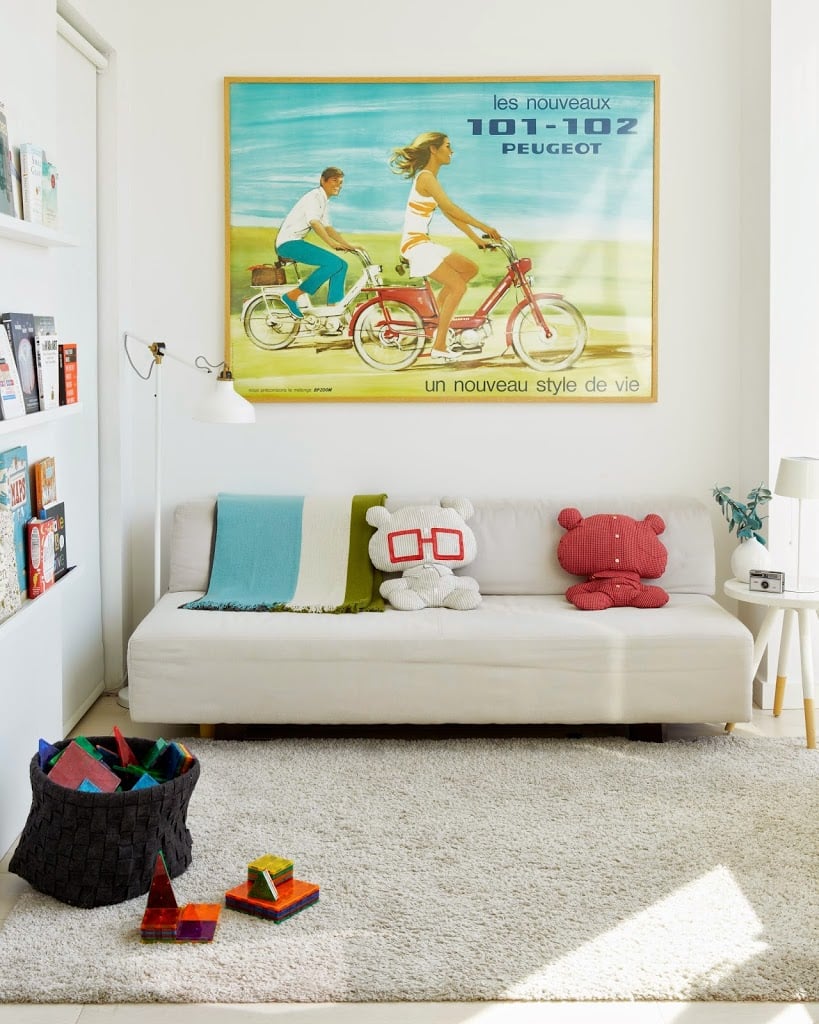 On forgoing a TV: My husband and I both feel strongly that when you live in an apartment, a TV turns into an altar. So instead we watch TV shows on our computer, and we’ll project movies onto the wall or the blinds at night. When we do that, our neighbors across the street can watch it in reverse!

On having a (shared) vision: I’m really intense about decorating. I walk into a room and I see it: where things need to go, how they need to go, what colors they need to be. It’s hard to live with someone like me. Luckily, my husband Gary is easygoing. When we moved in together, we had to start over from scratch. His style is actually ornate—that’s how flexible he is. I showed him what I liked, and he was like, “I never would have looked at this, but I can kind of like it.” While we didn’t have the same aesthetic, I saw that he put so much care and love into a space and I loved that about him. For our wedding, we actually had an art registry (and got this cycling print). That helped us start fresh. 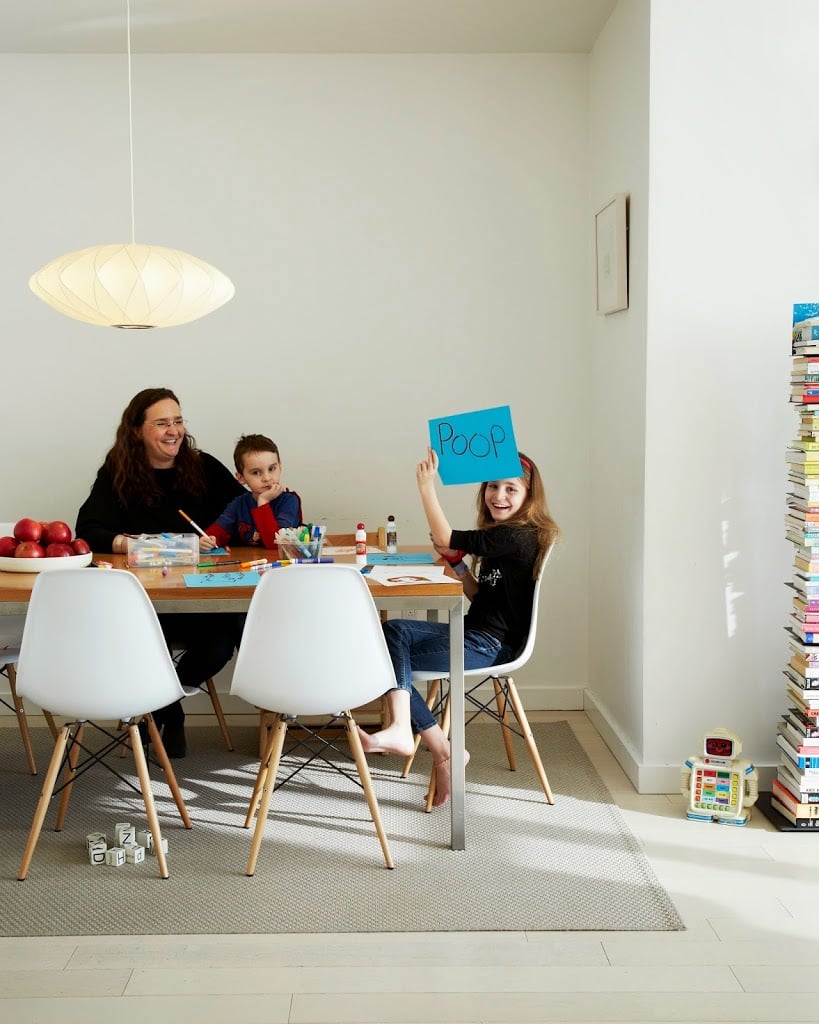 On family hangs: We always eat breakfast together at the table, every day. The kids have waffles, cereal, yogurt. I always make eggs; I’m an egg lover. We have movie night on Saturdays where we project a movie onto the wall. We just watched Moon Man a few nights ago, which is this lovely 50-minute animated movie about the moon coming down to Earth because it’s bored. 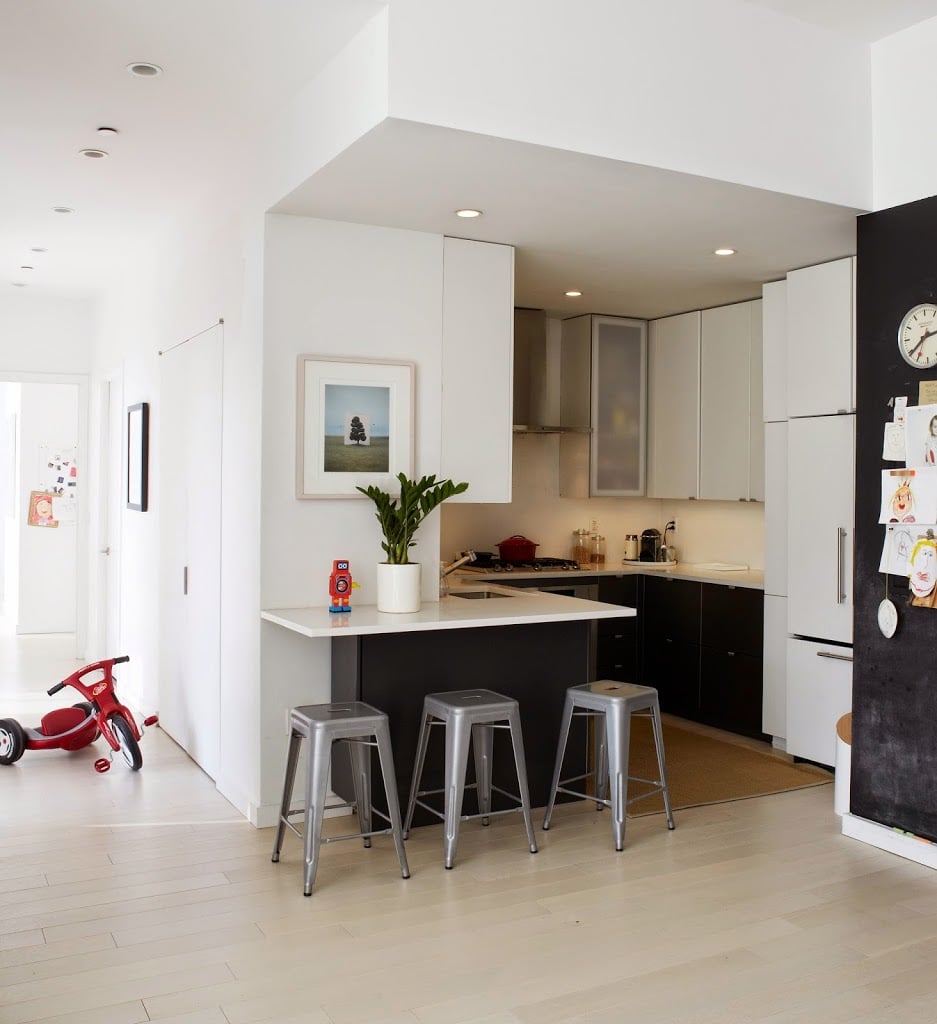 On being the family cook: I’m the cook in the family. I make raclette, a Swiss dish where you melt cheese in a tiny pan. It’s the coziest thing you can do on a winter night. I got stuck in a rut cooking the same things, so now every weekend I try a new recipe. I used to have this fear of cooking legit pieces of meat (like a roast) until I forced myself to try. I’ll invite friends over and we call it the “no-pressure cooking club.” If it sucks, we’ll order in! 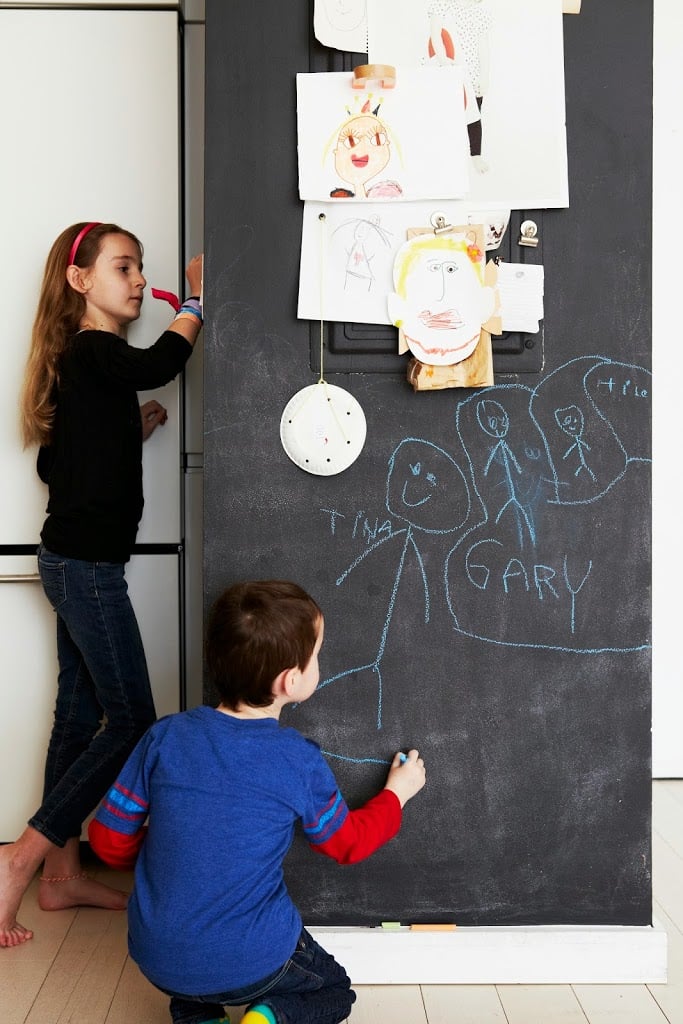 On how to unwind: I’m the worst at this. I don’t have any rituals—I’m not even going to make one up. (A glass of wine?!) On the other hand, my husband is the most zen, calm, relaxed personal on the planet. He stretches for 20 minutes every morning and every night. I’m so jealous that’s he’s able to pull this off. In the morning when I get up, I’m already on 100. By the time he’s done stretching, I’ve showered, made the kids’ lunches, made breakfast and am ready to go. It probably drives him nuts. 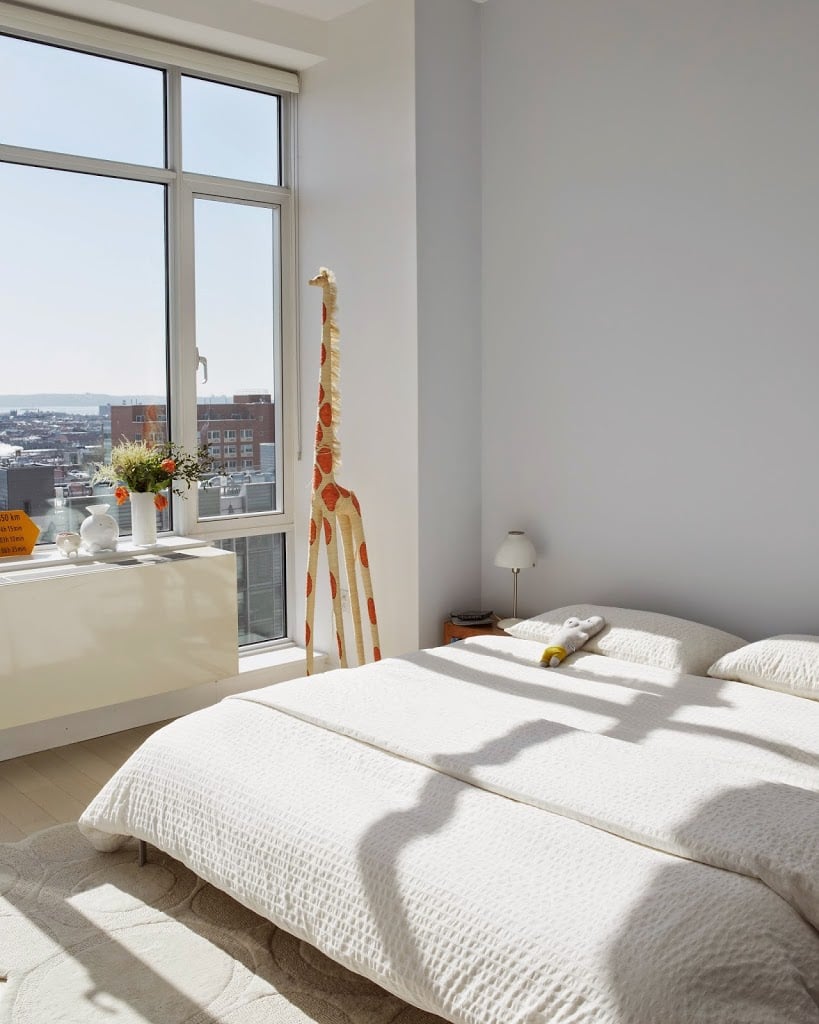 On the power of white: I’m a white sheet person—we have only ever had white sheets. If I could, I would live in a white box. There’s something so comforting about white to me. I think it’s a very Swiss thing. I love the rug in our bedroom. It has these beautiful round edges. I’m dreading the day when it’s going to be so done that we’ll have to get rid of it.

On low beds: I prefer low beds. I don’t understand why American beds are so high. When you have a low bed, it takes up less space, so a bedroom looks way bigger.

On making a “European” update: The bathroom in the master bedroom was this nook without windows. Our old apartment had a ginormous bathroom and I was sad to give that up. So I said, “What if we made a window in the shower?” The tile guy was this little old man who looked at me like I was crazy. He was making this tiny little window, trying to be modest, and I was like, no, make it bigger! Gary explained, “She’s from Europe.” 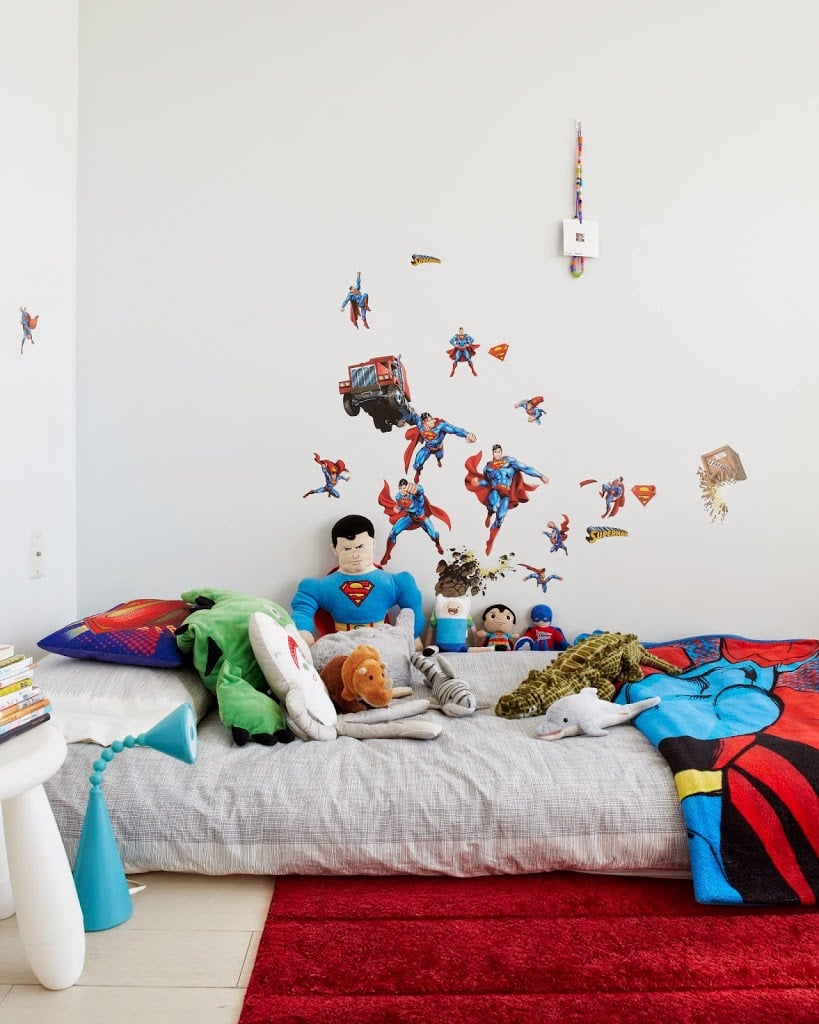 On Tilo’s favorite things: Tilo is all about superheroes. He’s also really into pizza. He’s so in love with this book Secret Pizza Party—it’s a picture book where a raccoon wants to get a pizza, but he can’t just walk into a pizza place. Tilo just turned five, so for his birthday we threw him a secret pizza party, and he dressed up as a raccoon. 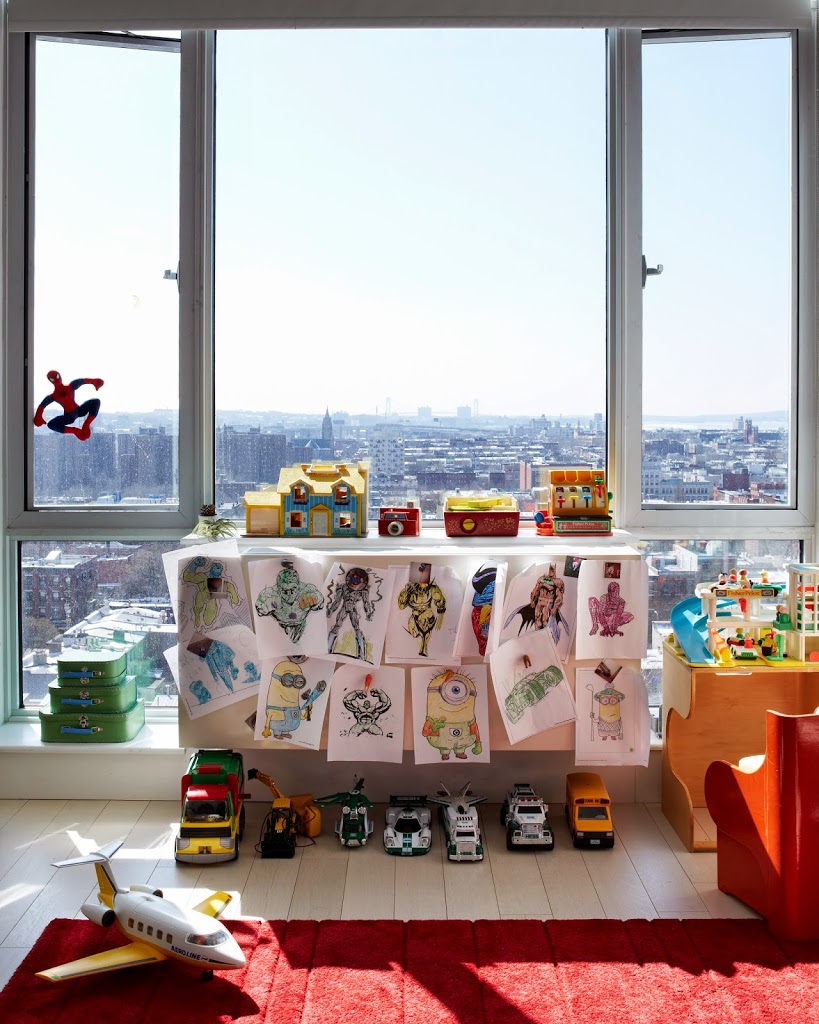 On lengthy bedtime routines: It’s this weird dance with Tilo—Gary reads him a book, then I read him a book, then Gary goes back in and reads him another book and sings him a song. It’s a ritual. The thing is, you can end it at any point, but if Tilo is like, “Daddy! Can I have a bonus book?” he won’t say no. 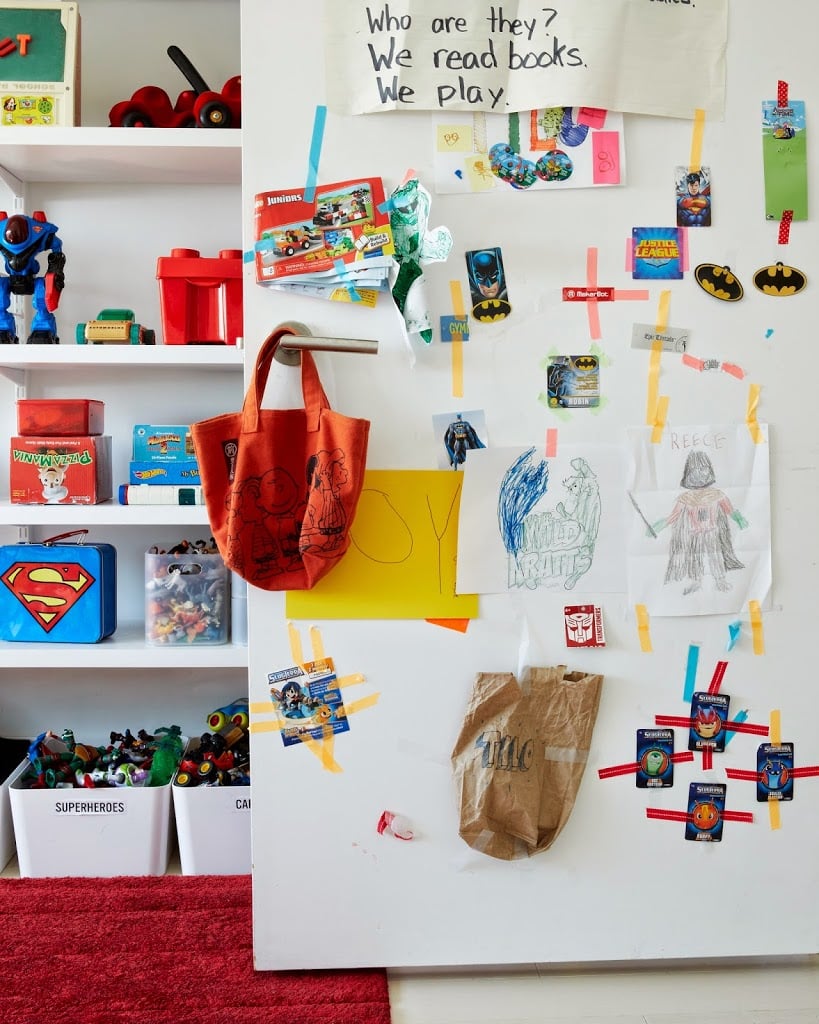 On keeping things neat: We edit everyday. I believe you should only keep the things you’re actively using, and my husband agrees. I’m really intense about getting rid of things—I have a shelf in my closet of things to bring to the Salvation Army. My son is the king of giving things away when he’s done with them. Ella doesn’t have the clean-up gene, but Tilo is just like me in that way. He’ll be like, “Let’s clean up before we go to bed!” 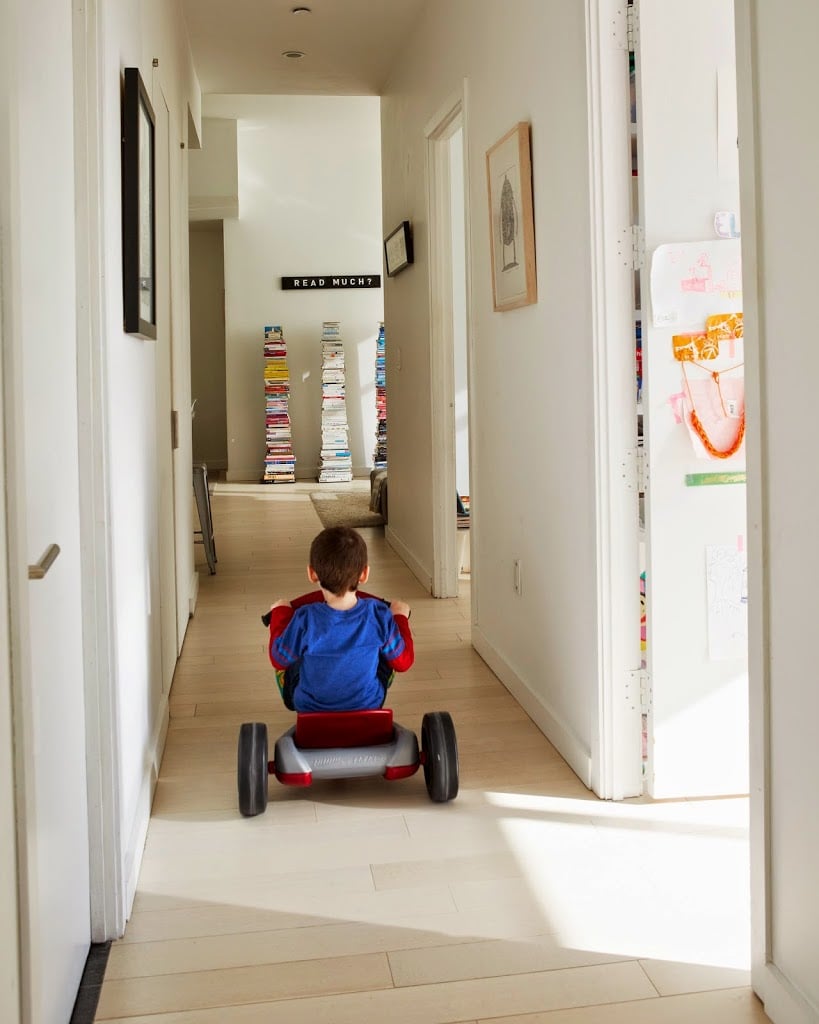 On holiday traditions: We try to dress up as a family on Halloween. We were superheroes, we were bees…I want to be breakfast items this year, but that will depend on whether I can convince everyone or not. 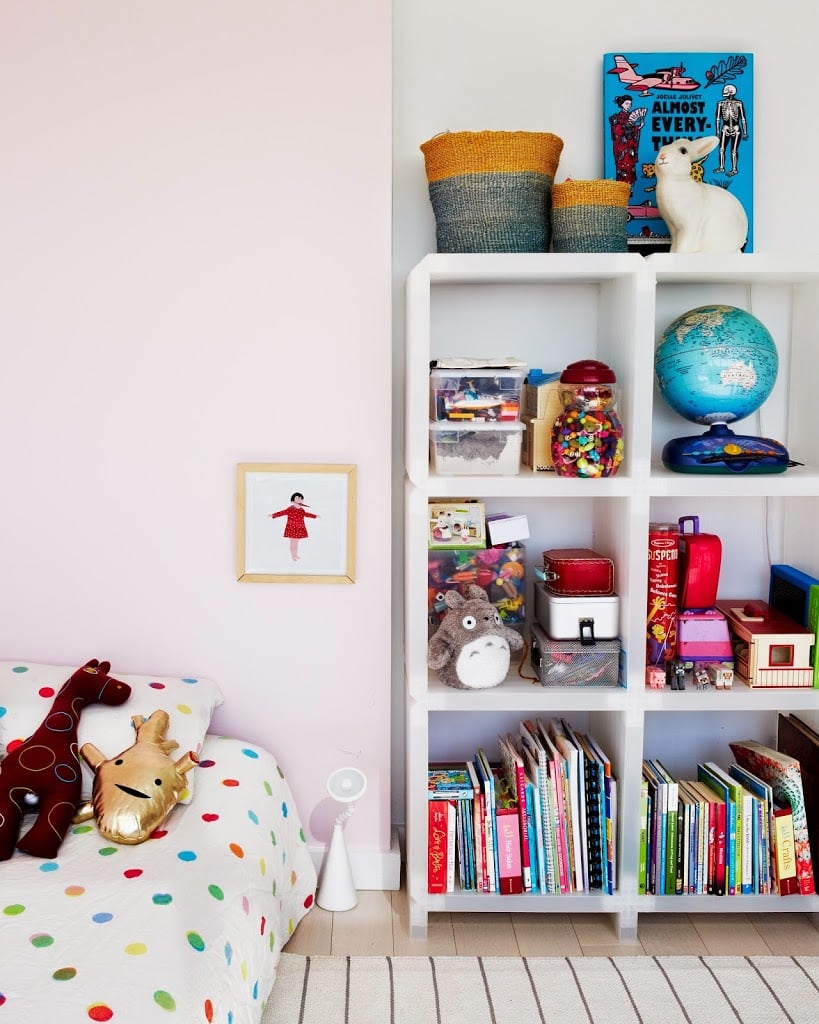 On city camping: We went “glamping” at Ella’s best friend’s house. She lives right across the street, so we camped out on the roof of the townhouse. We could wave to Gary up in the apartment! We slept in a tent. We played a campfire app on the iPad and made s’mores inside on their fancy stove. It was awesome hearing the sounds of the city at night. I don’t want to go camping in the woods—I like having a bathroom! 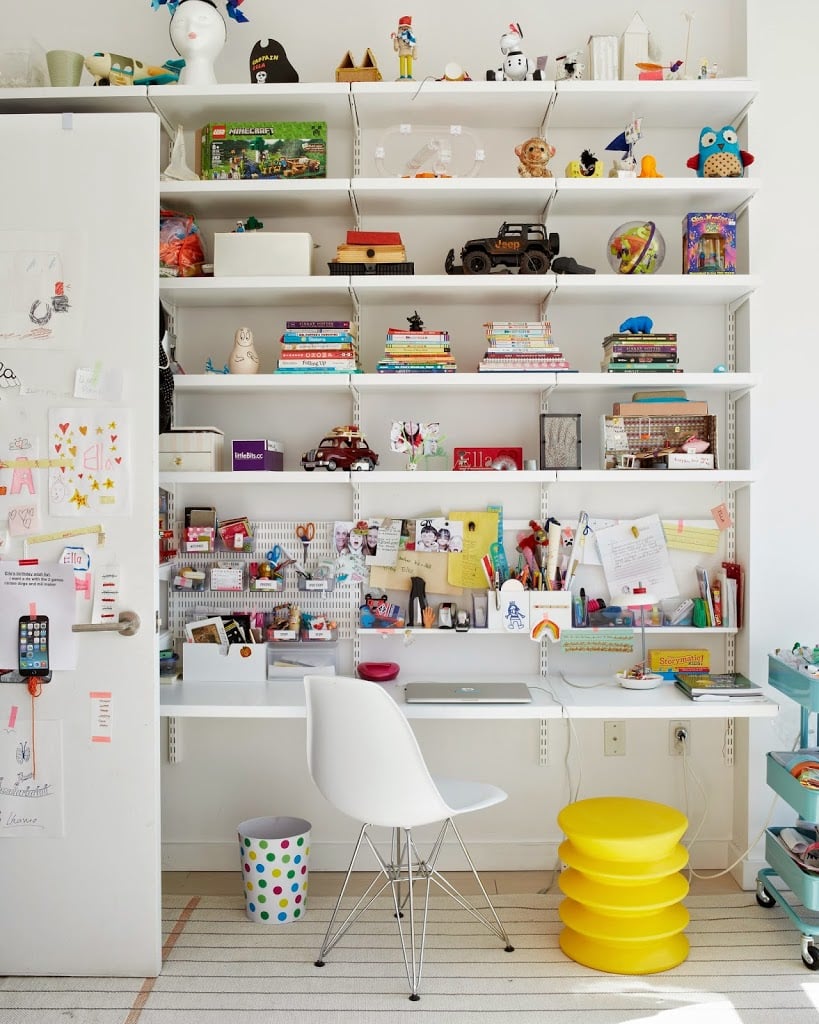 On raising city kids: Ella loves to go rock climbing at Brooklyn Boulders. She loves getting her nails done with me, but we only do that every few months. Tilo loves going to Barnes & Noble down the street. They both love going to Buzzarama, a total time warp of an old race-car track, it’s really a treasure. The owner’s in his 80s! 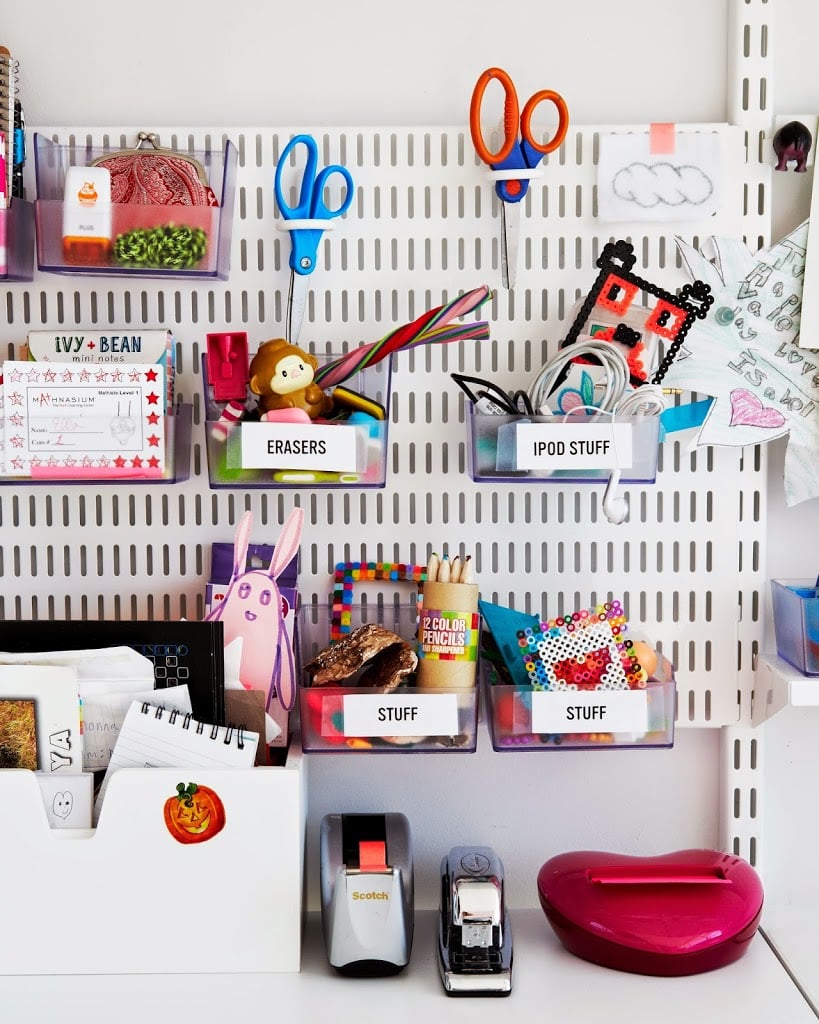 On getting kids to talk: Every night I’ll ask them, “What’s one thing that made you happy today?” I’ll ask them all sorts of questions, and Ella loves it. The way you always get them is you phrase it into a story, “When I was your age, I remember…” They always listen to those.

Thank you so much, Tina! You and your home are both so inspiring.

(Photos by Alpha Smoot for Cup of Jo. Styling by Kate Jordan. Interview by Caroline Donofrio.)

By Joanna Goddard
Design
This Woodsy Home Has a Friendly Ghost
March 27, 2019