The Best Pizza You’ll Ever Have 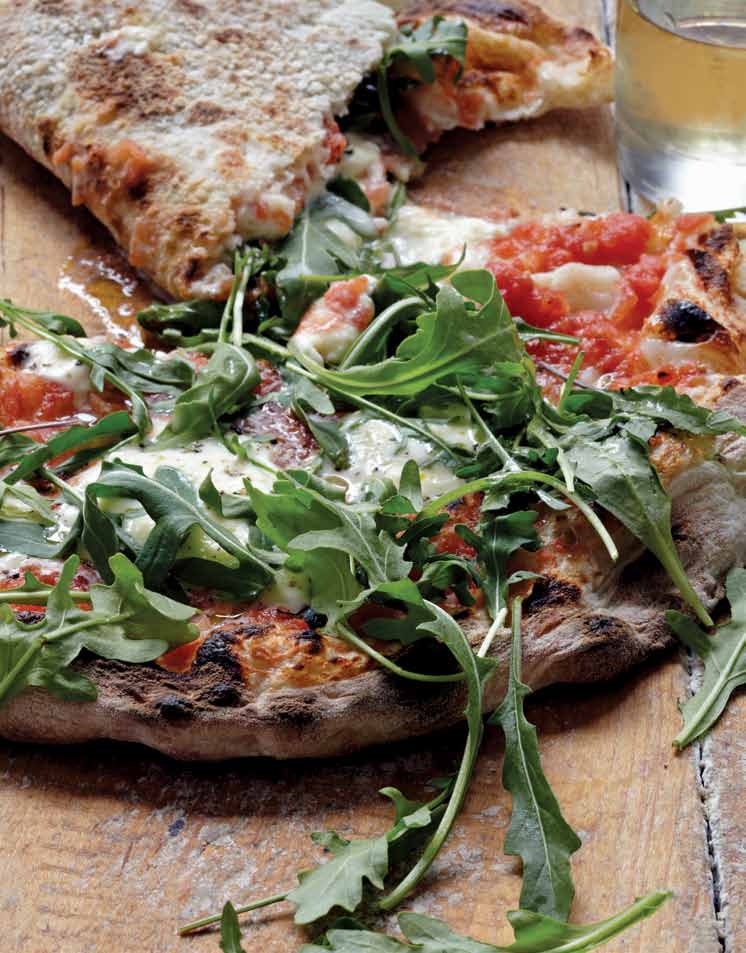 What’s your favorite pizza place in NYC? After living here for eleven years, I can definitely say that the best pizza I’ve had is at Co. in Chelsea. Have you ever been there? Co.’s owner, Jim Lahey, is a bread-making genius (“the man can do wonders with flour and water,” says the New York Times); since New York pizza is known for its thin crust, the danger is that it can taste as dry as cardboard, but Lahey has a way of making his pizzas pillowy and chewy in just the right way. He also adds bold toppings—like, sauerkraut, arugula, leeks, pecorino—that elevate his pizzas from kids-birthday-party catering to grown-up fare. Here’s a recipe that will blow your mind… 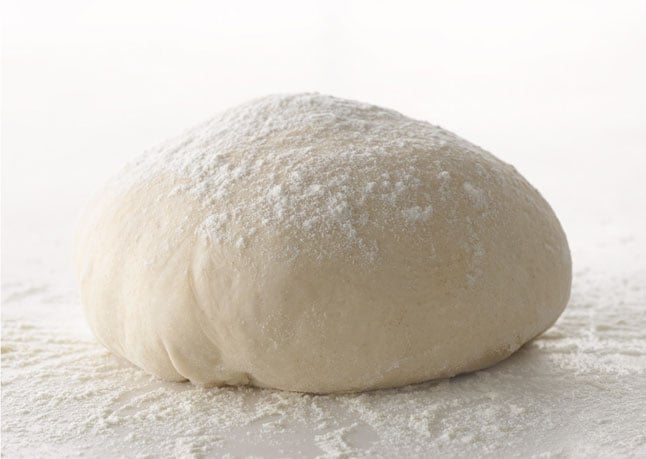 The Best Pizza You’ll Ever Have
by Jim Lahey, owner of Co. and author of My Pizza: The Easy No-Knead Way to Make Spectacular Pizza at Home

In Italian, stracciatella means shreds. As a cheese, it’s a soft form of mozzarella that melts very quickly, becoming molten almost instantly. In Italy it’s often used in soups. With pizza, you’ll find that stracciatella placed on the hot pie just of the oven turns the pizza into a masterpiece that looks like you slaved and worried over it—when in fact you surely didn’t. It’s quick and easy—and in my restaurant it is ordered so often I sometimes think it’s all the guys in the back are cooking.

Stracciatella is not in every cheese store, even many of those with an especially broad selection. I buy ours from Buon Italia in New York City. It’s worth ordering and waiting for.

1 ball of Pizza Dough, shaped and waiting on a floured peel (here’s the recipe for easy, no-knead pizza dough…but you can sneak and get frozen dough at Trader Joe’s!)
1/4 cup basic tomato sauce (recipe below, if you’d like to make it from scratch)
Generous pinch of fine sea salt
Freshly ground black pepper
2 1/2 ounces stracciatella cheese
About 3/4 ounce arugula
Extra-virgin olive oil, for drizzling

Put the pizza stone on a rack in a gas oven about 8 inches from the broiler. Preheat the oven on bake at 500F for 30 minutes. Switch to broil for 10 minutes.

With the dough on the peel, spoon the tomato sauce over the surface and spread it evenly, leaving about an inch of the rim untouched. Sprinkle with salt and pepper. With quick, jerking motions, slide the pie onto the stone. Broil for 3 minutes under gas, until the top is bubbling and the crust is nicely charred but not burnt. Using the peel, transfer the pizza to a tray or serving platter. Distribute the cheese in clumps over the surface of the pie; it will melt and spread immediately. Cover it with the arugula and drizzle with oil. Slice and serve.

Recipe: Basic Tomato Sauce (if you’d like to make it from scratch)

If using fresh tomatoes, bring 4 quarts water to a boil in a 5- or 6-quart pot.

Cut away the dry stem area of the tomatoes, leaving the core intact. Place 2 or 3 tomatoes at a time in the boiling water for 5 to 10 seconds. Remove with a slotted spoon and put on a rack to cool. Peel the tomatoes with a pairing knife.

Whether using fresh or canned, cut each tomato into several wedges and run them through a food mill over a medium bowl to create a pulp (not a fine puree; you want to retain some texture). If you don’t have a food mill, just squish them with your hands—it’s messy but fun.

Stir in the olive oil and salt. The sauce will keep, covered, in the refrigerator for up to 1 week. 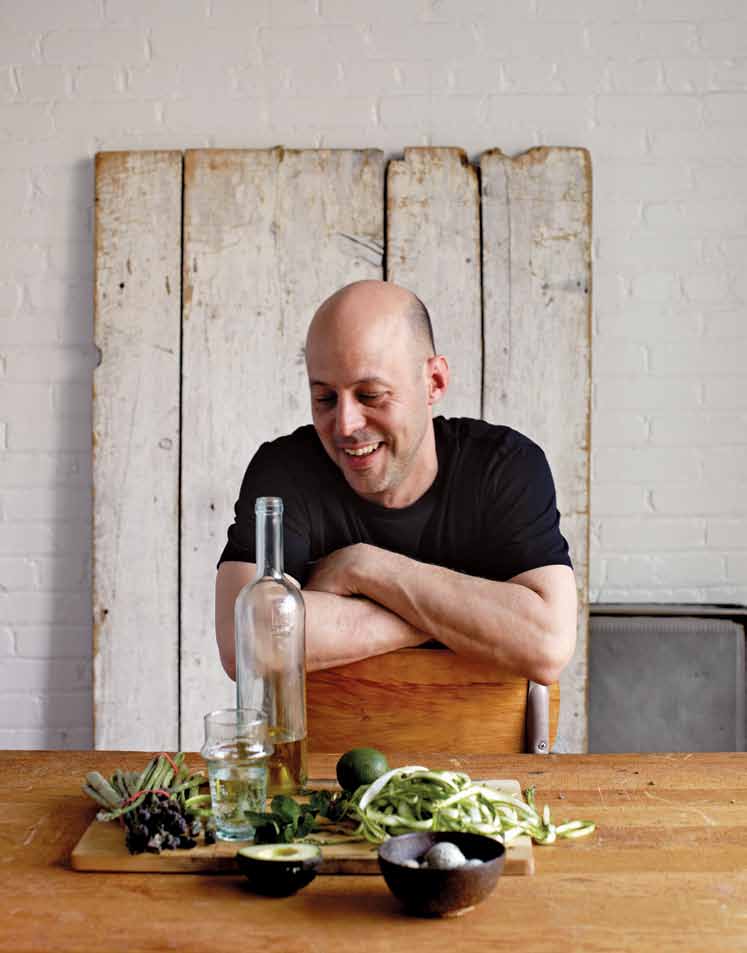 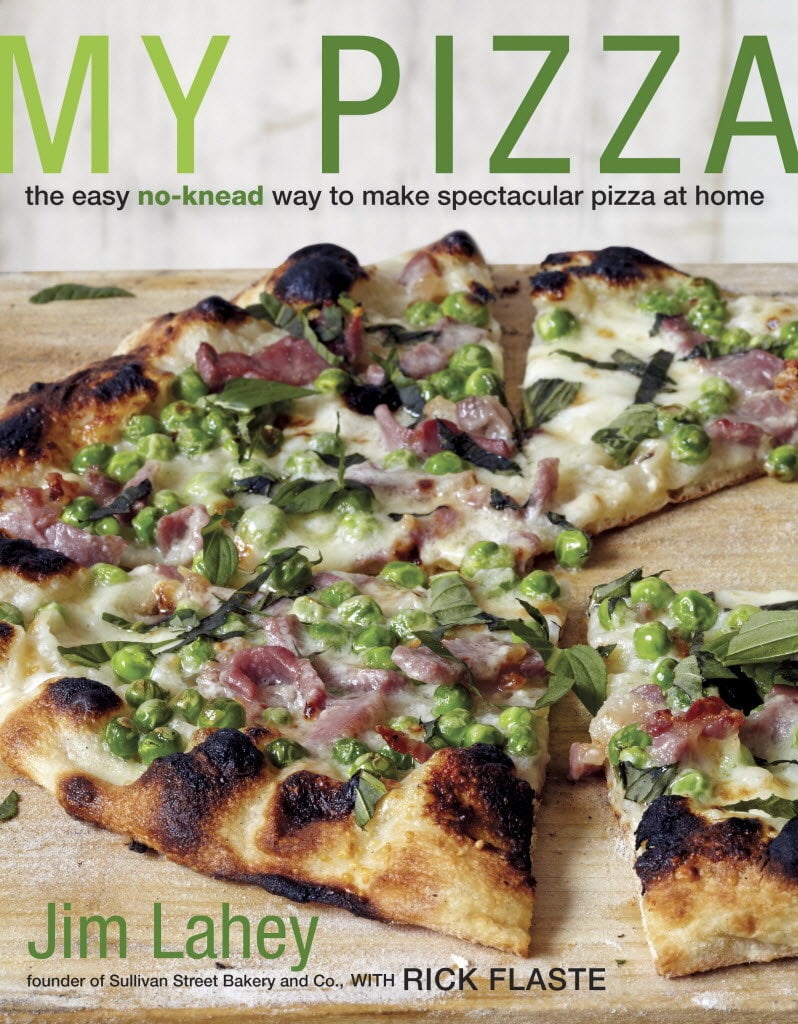 Yum! Thank you so much, Jim! Your cookbook is fantastic.

(Recipe by Jim Lahey, author of My Pizza. Dough photo by Tara Donne for Bon Appetit, all other photos by Squire Fox for My Pizza)

Awesome post.. thanks for sharing with us !!
Buy Pizza online

The pictures alone made my mouth water. My friends did a homemade pizza party last Halloween and it was such a hit. I think I want to try hosting the same dinner idea and this recipe seems perfect! http://www.secondslice.com/about.php

What a fun and healthy idea!! Never thought to use a bean puree on pizza but it makes total sense. I love this recipe, bookmarking it for our next pizza night!

This look so amazing. I had an amazing pizza in Calgary and I’m determined to try every recipe til I find one like it. This one just might beat it though.

This looks like delicious pizza! In Calgary, I have been trying new pizza recipes. I will have to try this one.

This is best pizza recipe. Keep going on with your effort to write more posts.
Must read my Pizza Dough Recipe How To Make Pizza Dough
visit: http://chowtomake.com/ here many pizza ideas…

Thanks for sharing ood and helpful article with us. I really have enjoyed all of this very cool information.

It looks so delicious pizza, I love it. Thanks for the share!

Pizza night on Sunday with some friends, I’ll try the dough recipe for sure! Maybe a broccoli rabe, garlic, chili, goat cheese pizza…

I love to make home-made pizzas once in a while, so I will definitely give this recipe a try.
it looks super tasty!

This looks great but I would still probably just buy the pizza grom the gourmet spot down the street! LOL
http://www.malindaknowles.net

We made pizza today in our large cast iron, using Trader Joe’s whole wheat pizza dough. My favorite is to top it with arugula that has been tossed in a lemon vinaigrette with grated reggiano parmesan, so every leaf is coated. Delicious.

Looks good, but that is alot of preheating/energy use for 3 minutes of cooking time. I’d rather just go down to the local NY style pizza place which is freakin’ delicious!

Pizza is one of my favorite foods! This looks so, so good!

Jo you should also check out Roberta’s in Bushwick. Don’t stick to just the pizzas there either. Everything is great

what a coincidence! i just discovered the no-knead pizza dough yesterday, started a batch and was thinking how excited i am to get it in the oven and get to eat it tonight when i saw your post!

This looks divine! I’m more of a “warmer-upper” of Trader Joe’s frozen pizzas, or if I attempt to make my own, I cheat and use pita bread. If I’m feeling especially lazy, I just pick up the phone and order one. This makes me want to give Jim’s recipe a try! Great post!

Jim Lahey’s pizza dough recipe from his book My Bread is our go-to. And we LOVE that most of the pizza recipes included are naturally vegan!!! My husband seriously goes bananas when he finds out I’ve made pizza for dinner. We usually top with marinara sauce, artichoke hearts, red onions, and mushrooms. Sooo good!