The Best (Rosemary Parmesan) Popcorn You’ll Ever Have 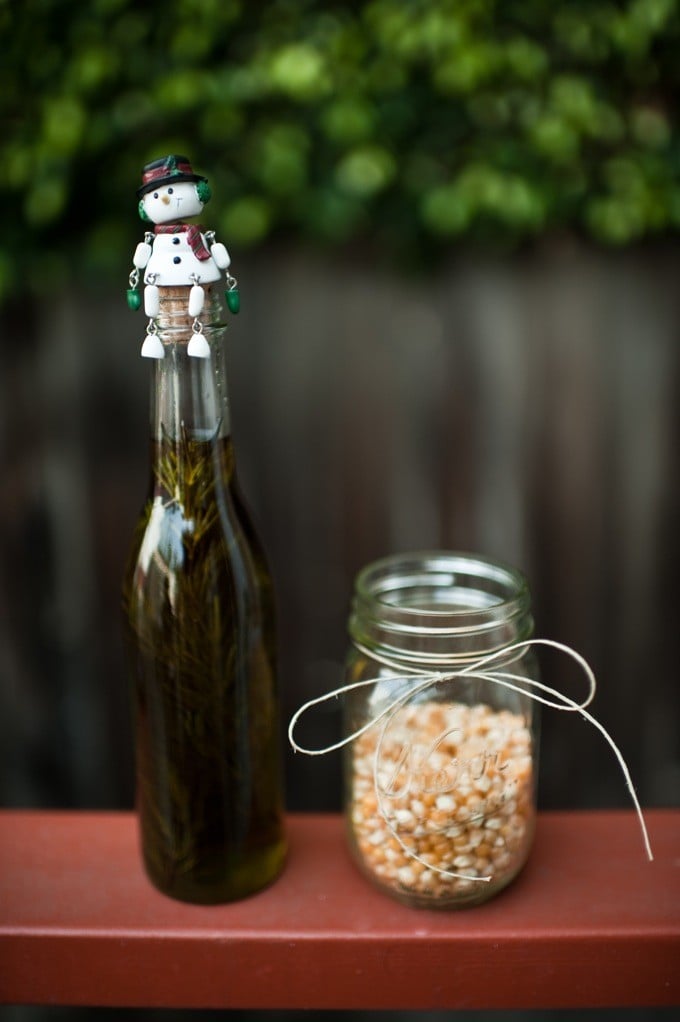 What’s cozier than curling up on the sofa to watch a movie with a big bowl of popcorn? And buttered popcorn is great, but other toppings take it to a new level. Here, Siri from Siriously Delicious shares her delicious recipe… 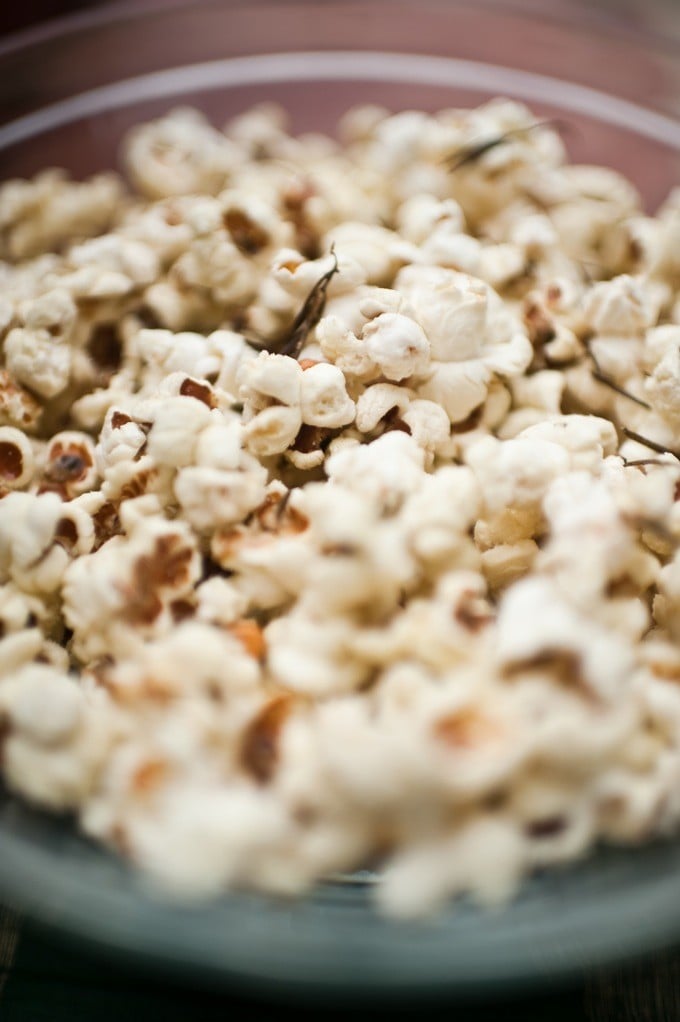 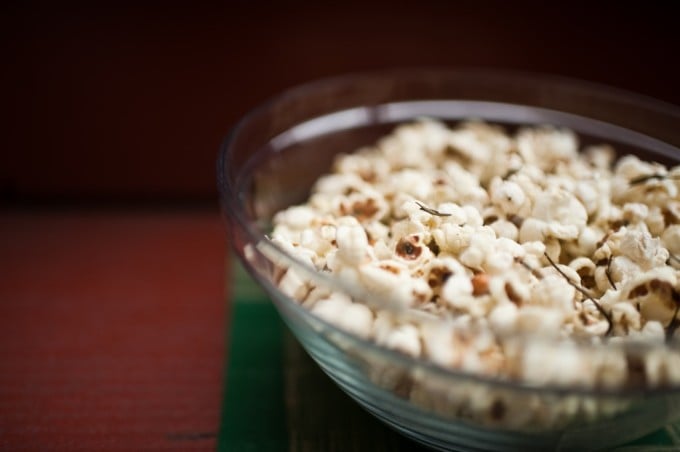 I discovered this popcorn on a wintery day in New York City a few years ago. We had ducked into a bar for some beers and the bartender placed a bowl of popcorn in front of us. To the eye it looked like an average snack but after one bite, we were desperate to know what made it the best popcorn we had ever put in our mouths. A few fresh ingredients had done the trick: rosemary-infused olive oil and grated Parmesan.

Can you imagine: the best popcorn you’ve ever had and no butter?! The rosemary—earthy and aromatic—pairs beautifully with the nutty, salty Parmesan and, of course, there’s nothing more addictive than a batch of freshly popped popcorn. I was destined to go home to create my own and very pleasantly surprised at how easy it was to pull off.

The longer you infuse the oil with the rosemary, the better (and the leftover oil is perfect for pasta or chicken or drizzled over salad). But even if you throw this together at the last minute, your friends will be begging you for the recipe. Instead of sharing, gift them a bag and keep the recipe a deep, dark, delicious secret.

To make the oil, combine olive oil and rosemary sprigs in an airtight container or jar and refrigerate overnight (or up to 3 weeks).

To make the popcorn, heat oil and 1 kernel of popcorn over medium-high heat in a large pot. I like to add some of the rosemary leaves from the oil as well. Once the kernel pops, add the rest of the kernels and cover. Listen closely; once popping subsides, remove from heat. Add Parmesan and salt, and shake up the pot to stir. Taste, and add more cheese and salt as needed. 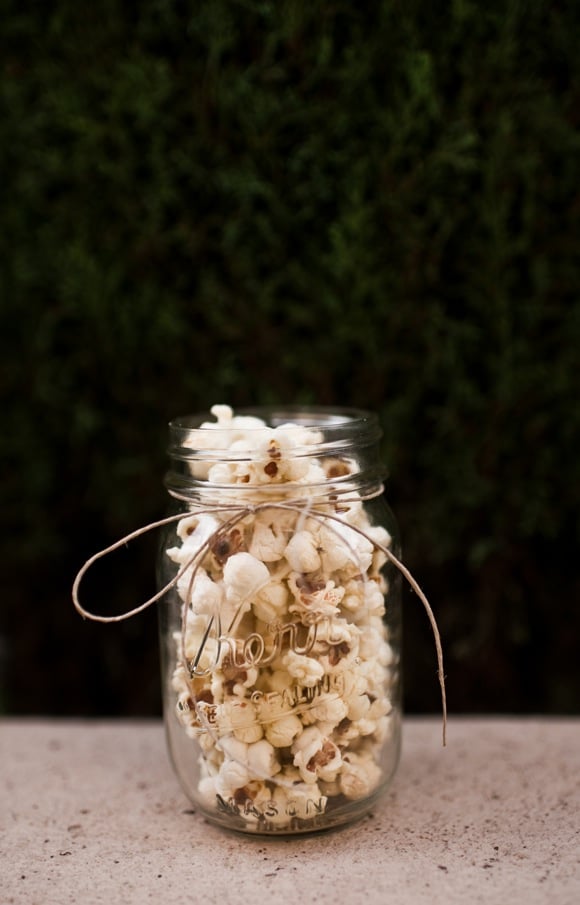 What else do you guys put on popcorn? Thanks, Siri!

(Recipe by Siri of Siriously Delicious; photos by Chasing You Photography. Thanks to Shoko for helping with this series.)

I like this great blog..It is very nice..recently I cooked popcorn in my home and i eat with my family..I really like this popcorn..thanks..

Oh this is perfect timing. I was just thinking about a nice snack to serve during the cocktail hour of my wedding reception. How far in advance can I make this? Will it be gross if I make it the day before??

You know one thing I put on popcorn? Ketchup! :D
But this sounds way more delicious, pinning this to try later. Thanks for the recipe!

wow, this sounds so much easier than I would expect! Will try this weekend.

wow, this sounds so much easier than I would expect! Will try this weekend.

popcorn is my most favorite snack, ever. i love hearing that other folks put nutritional yeast on their popcorn, too (i get mine to stick with a little melted earth balance!).

my favorite toppings?
– sriracha (no joke. i melt it with the butter or earth balance, pour it on, and BAM!)
– chili powder + nutritional yeast + cumin + lime
– salt and gummy bears (rare, but a tasty sweet treat at the movies)
– butter + pepper
– i’ve made it with chili infused oil before, and it was amazing

i figure popcorn is the perfect canvas for just about everything!

I love popcorn with fresh squeezed lime juice and chili powder, so good!

Looks experimental but will try! :)

Hey Joanna,
My family always had caramel popcorn. I hope it’s not too cheeky, but I have a link to my recipe here: http://emmabennetto.blogspot.com.au/2013/01/caramel-popcorn.html

I make some really nice Caramel Popcorn Balls..they are yummy to taste and absolutely gorgeous to look at! :) I posted the recipe on my blog..to read, click on the link below:

Mmm, popcorn flavors are so much fun! One I particularly enjoy, which you should try, is lime and garlic salt. I have been thinking about posting about it on my blog actually. It is quite simple, just squirt some fresh lime and sprinkle some garlic salt and there you have it. What I really enjoy about it is the pop of lime on some pieces, since it soaks in. Love it!

That sounds amazing! I have put grated cheddar on mine before, but this looks even better!!

I LOVE popcorn. I make mine stovetop, popped with coconut oil (and sometimes a nub of butter added to it). My favourite topping combo is nutritional yeast and BEET ROOT POWDER! it’s nutty, sweet, cheesy, slightly earthy. yumm.

In Spain we just eat salted popcorn so this sounds so ackward to me! But unexpectedly nice… um…

Oh my god this looks amazing! At work we’re all obsessed with flavoured popcorn- today someone had honey and sea salt and it was AMAZING!!!

Sounds delicious! I may try it with a different oil, though because olive oil oxidizes at high heat, which isn’t a good thing. I would have never thought of rosemary for popcorn!

By bar…did she mean Jean Georges? lol. Our friend bartended there years ago and yes- the popcorn is TO DIE FOR. We’ve tried to replicate it at home, but I can never get my popcorn to pop nicely on the stove. Will have to wait for a bigger kitchen and a real popcorn maker to do it properly I suppose.