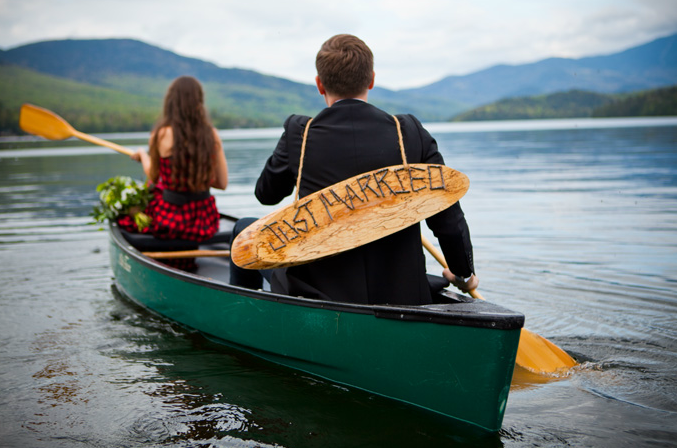 If you love heartfelt weddings, you have to see this… 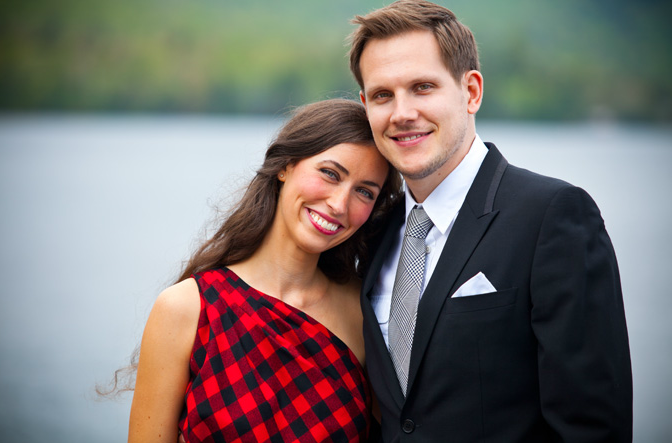 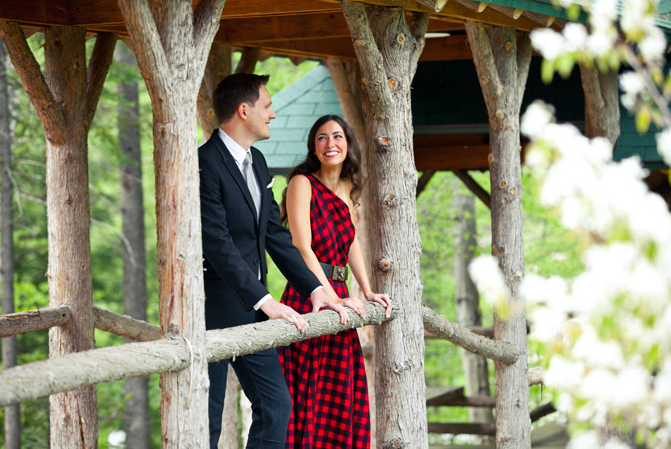 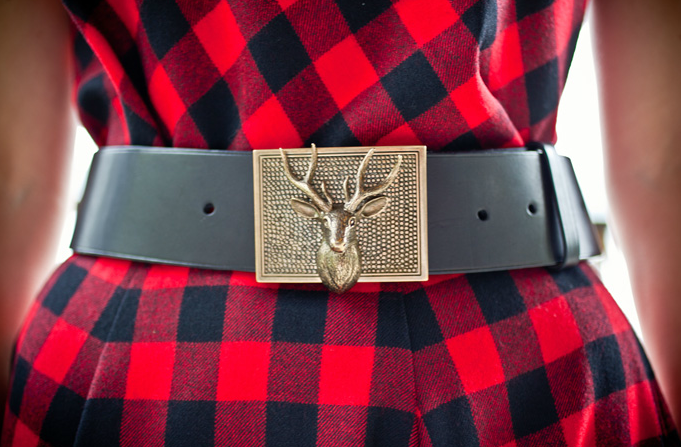 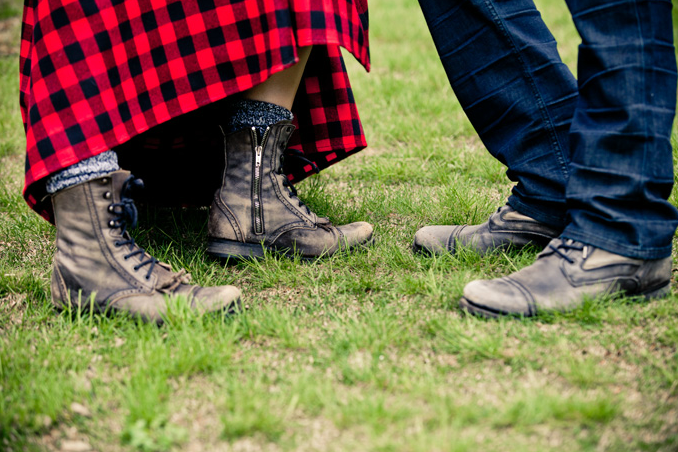 New York City couple Laurie and Brendan felt stressed out by the idea of a big wedding, so when her mom suggested they elope to Lake Placid Lodge in the Adirondacks, they jumped at the chance. They spent five days doing “nature-y things,” and then had a small ceremony, went canoeing and made s’mores. Here, Lauren tells their story…

What was your ceremony like?
Really quick and sweet. I gave Brendan his ring. It was super fun. The judge told us what he does during the day, throwing guys in jail. We had a whole conversation. But that was so us! We’re the most unromantic people in the entire world.

Where did you stay at night?
We slept in a lakeside cabin, where the lake comes almost up to the window. We had a fire every night. It’s one of the prettiest places I’ve ever been—both the scenery and the hotel itself. When you stay there, it’s always part of your life afterward. 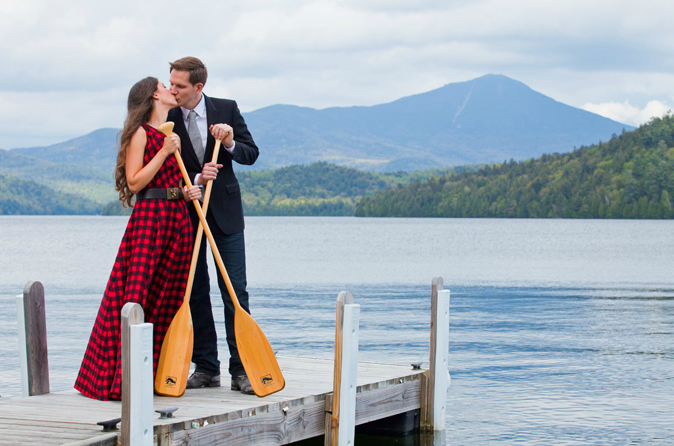 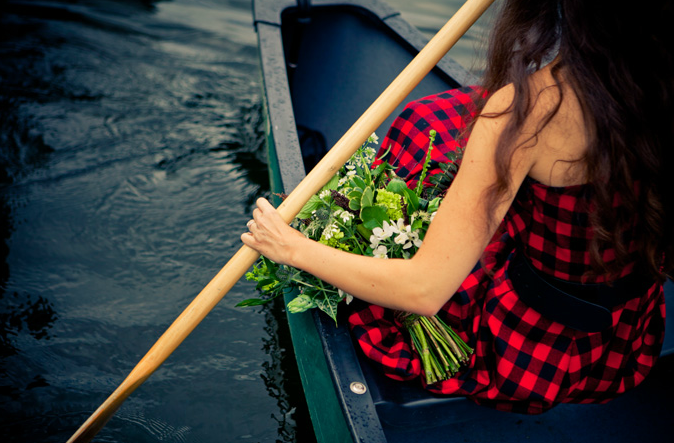 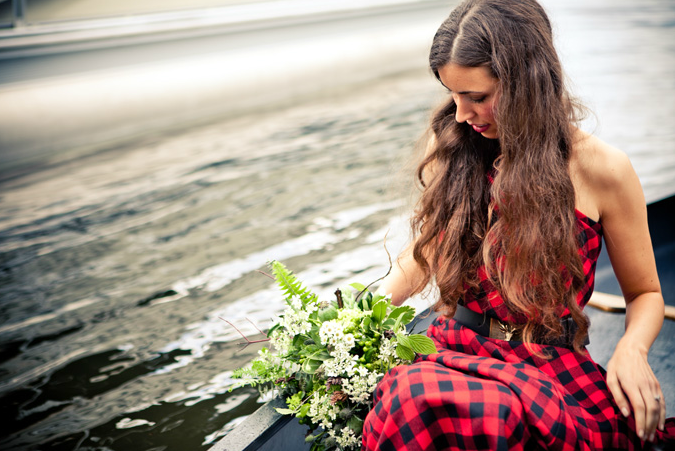 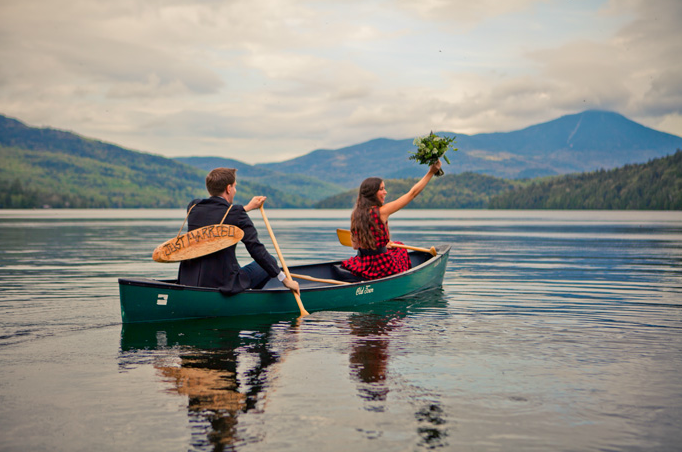 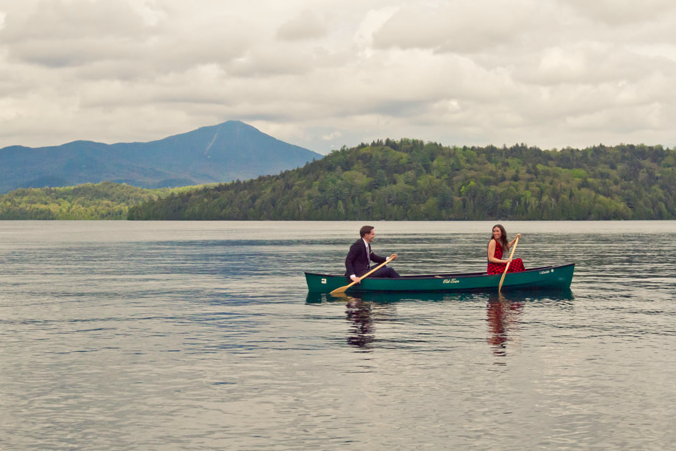 How long have you and Brendan been together? Thirteen years. We met when I was just 15, and he was 18, and we’ve been together ever since. It was just like, ahh, there we go, that’s done.

Where did you find your dress?
Ralph Lauren’s fall 2008 runway show had a buffalo plaid ballgown, and I always wanted it for my wedding dress. So, I had it made to look exactly like that. My friend is a designer, so he helped me find a guy who makes clothes, and we got Ralph Lauren fabric.

Your deep blush is so beautiful.
I’m absolutely terrible with makeup! I texted my sister for advice, and she said, whatever you do, go darker for the photos. I used Armani Eyes to Kill mascara (best mascara in the entire world) and NARS Mati Hari blush. On our drive up, I saw a pharmacy and grabbed a berry-colored lipstick; I was like, that looks fine! 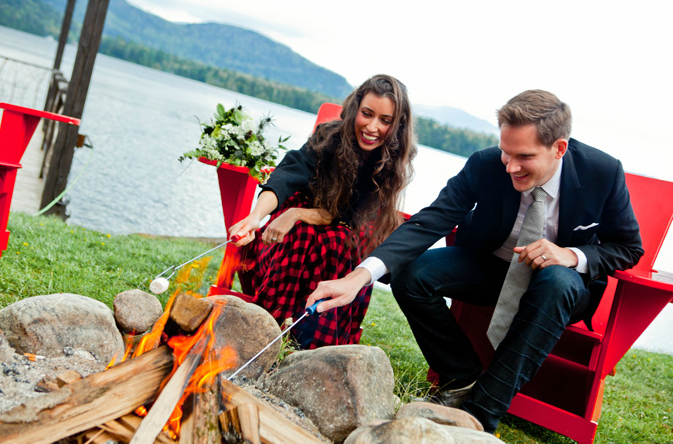 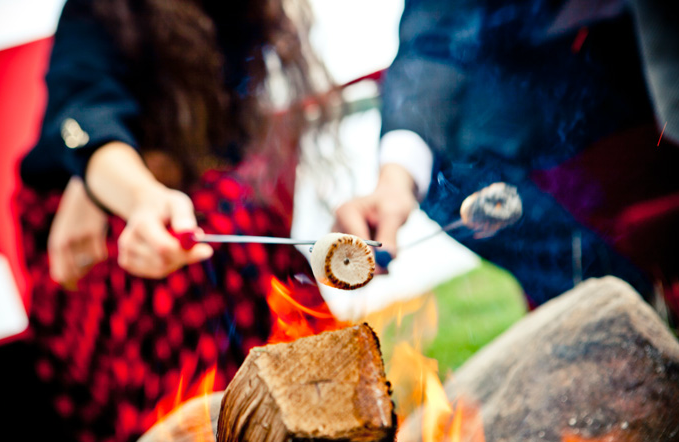 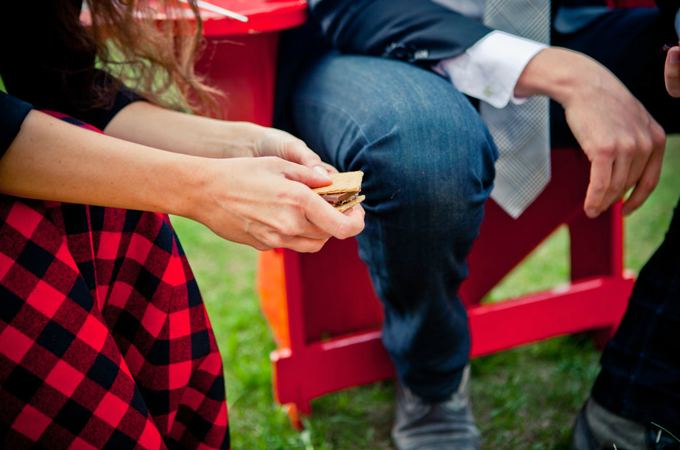 Would you recommend elopement to other couples?
It’s the way! All our friends are like, we’re just going to do that. It was stress-free. At the time, I was helping my friend with her wedding; she’s the coolest cucumber, but just seeing the politics and expense of it, I kept thinking, I’m so glad I eloped.

Anything you’d do differently?
It would be fun to bring two friends—the best man and the maid of honor. Although we had a blast by ourselves as well.

Congratulations, Lauren and Brendan! What do you think? Would you ever elope? This makes it look pretty appealing!

Tags: destination weddings, elopement
82 COMMENTS
WRITE A COMMENT
Relationships
most popular
01
Seeing My Body With Fresh Eyes
02
11 Wedding Dos and Don’ts
03
How to Write a Condolence Note
04
A Love Letter to My Anti-Anxiety Medication
05
How to Be a Better Listener
May We Suggest…
By Joanna Goddard
Relationships
7 New York City Hall Weddings
December 17, 2019

162 COMMENTS
By Joanna Goddard
Relationships
A Wedding at Home in Brooklyn
July 16, 2020

It is really lovely and I want to buy a belt like this for my GF, I would like to get ideas from you guys and yes I gift her a leather jacket recently from http://www.famous-jackets.co.uk and she liked her a lot. So, I would be grateful to you guys if you’ll help me in this like someone helped me to find this website for leather jacket :)
Thanks in Advance ;)

We got married at the city clerk’s office in NY. Our parents were there so I guess it wasn’t technically an elopement but it was small and perfect and we had lunch afterward at ‘ino in the West Village and I wouldn’t change a single thing.

I love her dress!

fires every night doesnt sound that ‘unromantic’. maybe this couple is more romantic than they think. maybe less so in the commercilised sold way, but that isnt real romance anyway!

We eloped August 2011 in Monterey, CA on the beach. It was amazing and such a relaxed day. I felt literally no stress. A bunch of factors played in to our decision to get married this way–family living all over and not having money to travel, no financial assistance for a massive wedding (which I didn’t want anyway), and some family dynamics drama. All in all, it has to be the decision of the couple. We gifted our parents with a photo book of our day and they loved that keepsake. No regrets. Our dog was the ringbearer…and the most adorable one ever, I have to say. Our friend got ordained as I didn’t want a “hire-a-pastor” to show up 10 minutes before and leave 2 minutes after with no idea of who we were as a couple. I wanted someone who cared about us and about our future together. We had another friend take video and hired a photographer. And it was perfect.

That does look like lots of fun. Maybe for an anniversary vow renewal?? We’re Catholic and very traditional so it wouldn’t be right for us though. We thought about doing a small destination wedding Austria with family and close friends where we met though. Ours will be fairly big but awesome =)(being Filipino you tend to have lots of friends), but the idea of a small, stress free wedding would be wonderful too, I’m sure.

This is so beautiful – her dress is stunning. We eloped to NY from Edinburgh and then had a party last month – it was absolutely perfect for us and I wouldn’t change anything about the day we got married (apart from that it was super hot that day!).

beautiful! i’m getting married next month and am seeing the perks of eloping (money, politics, compromises)…i love her shoes!

This is the cutest thing I ever seen! Gettin teary eyed…
<3 Dana @ This Silly Girl’s Life

What a lovely story!! Congrats!

congratulations to all the readers who just got married! :) i think elopement seems lovely. oh, and i hear you, chloe, about some weddings having staged photos, but i think these seem really relaxed, real and beautiful; apparently the photographer–Jon–was in his twenties and super fun:)

Yes, theses pictures are lovely and they seem very relax!

yes, the hotel was the lake placid lodge. doesn’t it sound amazing?

We eloped just over a month ago. It was just me, my hubby and our three month old at a great B&B in Williamsburg. We wanted our focus to be on the marriage and not the wedding, so we thought this would be perfect. After the ceremony we dropped our son off at my parents and had a nice dinner at a great restaurant, lots of champagne and cake back at the B&B. It was perfect.

This is beautiful.. Do you mind sharing the hotel they stayed in?

We eloped, but certainly not with this gorgeous dress wrapped around me. Love it!

My (now) husband and I just recently did the same thing! After getting so stressed planning a larger wedding on the east coast for next summer, we decided to scrap it all and elope at the Oregon coast! Best decision ever! Check it out here:

Beautiful! One of my best friends got married in our other best friend’s backyard this past weekend while my husband officiated. It was a simple & beautiful backyard fall Iowa wedding.

SUCH a beautiful dress! She looks stunning in it and I can’t believe she’s wearing so little make up! I had a big wedding and even though it was the best day ever, whenever any of my engaged friends ask me for advice I always tell them to elope!

that is so amazing! beautiful! so unexpected, loves it!

My husband and I basically eloped. At the last minute we invited our parents and siblings. That way no one had any time to be involved in the planning–they were just happy to be there to share the day with us. It was perfect.

This is Amazing!! What it should be..

Reply
Put This On

So beautiful! Definitely something to think about!