Have You Ever Done the “Slow Fade”? 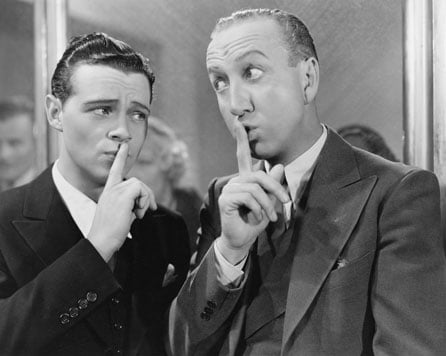 Back in my dating days…

I was kind of…The Worst. If I didn’t like a guy, I wouldn’t tell him outright, but instead I would give him a good-night kiss (I know) and then slowly…stop…answering…his calls. And the worst part is that I would do this even if we had gone out like five or six times, and even if I had spent the night at his house (I know!!!). I’m not proud to admit it, but this blog is about being honest, for better or worse, right?

So, since I felt mean telling a guy that I didn’t like him, I rationalized that it was better not to say anything. After all, I was saving him from that awkward conversation, too, right? But the real truth of it is: I secretly wanted to take the high road and tell guys how I felt, but I was just too big of a wuss to have those conversations. I couldn’t get up the nerve to be straightforward.

So, tell me: Have you ever done the “slow fade”? (I hope I’ve matured enough not to do it anymore, but I guess now that I’m married I’ll never know.) Or do you take the proper route and have an honest conversation? And if so, how do you get up the guts?

Tags: personal
159 COMMENTS
WRITE A COMMENT
Relationships
most popular
01
Seeing My Body With Fresh Eyes
02
11 Wedding Dos and Don’ts
03
How to Write a Condolence Note
04
A Love Letter to My Anti-Anxiety Medication
05
How to Be a Better Listener
May We Suggest…
By Caroline Donofrio
Relationships
“The Rules” Book, Revisited 25 Years Later
December 19, 2019

161 COMMENTS
By Joanna Goddard
Relationships
The Very First Emails Alex and I Sent to Each Other (We Were Nervous!)
September 1, 2020

My friends and I always referred to it as “letting it fizzle.” I’m def guilty of this! And a few of the awkward “I just can’t handle/don’t have enough time/don’t want a relationship right now” convos.

Yes, in fact I don’t think I’ve ever done anything BUT this (gasp!).

I have always been the slow fade wuss type. I too wish I could have been the type to just say – you and I just don’t have that chemistry. Now that I am older (married too)..and, if every (oh, I so hope not) I would just put it out there, “I’m just not into you.”

This is hilarious and relevant. I hope no one’s already posted it:

The Fade Away by Garfunkel and Oates

I’m actually in the process of starting a slow fade, but like you said, I secretly want to just be completely up front. I keep thinking about telling him straight up because I actually feel guilty doing a slow fade. This is probably the suckiest part of dating.

No, I don’t think so. Dating… it seems so looooong ago. I don’t like the fade though. I can’t stand the phone calls, etc… that keep coming. I’ve got to rip it off like a band aid.

Not that I’ve ever done the slow fade with a guy – but it’s relatively easy to be honest in the dating world, because you can make it about your own feelings rather than their failings.

But with friends? Or other parents and their kids? It’s hard. Is honesty the best policy, when the reasons ARE personal?

I just did the slow fade from a passive-aggressive friend with anger issues. I’m still feeling guilty that I didn’t have a conversation with her about it, but still can’t figure out how to be honest without being hurtful.

oh, dating
when will you ever come?

I always do the slow fade! I can’t bring myself to be honest and upfront. I wouldn’t want to hurt their feelings or their pride, we know what guys are like! I also wish I could be straightforward and lay it down for them but I think I’m too much of a coward!

to…taa…ly, never broke up properly with a guy! I’m such a coward! Now I’m married so I guess I’ll never have to – what a wimp!

erm…. no…. not really. i have a guy friend who i knew was interested in me, though he never said it out right, and i enjoy his company as a friend but not to date him. but i didn’t tell him i wasn’t interested in him like that. we have since had the awkward conversation… luckily we’re still friends and still go out like we did before, and actually now we both know where we stand its a whole lot less nerve wracking!

I always did the slow fade, but mainly because I had a very low tolerance for dating, so typically it would only be like 3 or 4 dates in. I hardly knew them well enough to do more, though looking back at a few I wince a little. So many of them didn’t get the hint for sooooo long. Like, longer than we had been together. The one seriously relationship I had before my husband I was completely upfront though. I can’t imagine a slow fade for a long relationship.

Maybe I’m alone in this, but if it’s early in the “dating process,” like 2-4 dates in, I just don’t really think it’s a big deal, and it’s not something I have to work myself up to or anything. At that point, I don’t feel like I owe them anything, so I basically just won’t contact them to suggest getting together again, and if they don’t either, then I guess you could call that a “fast fade” that we’re both executing mutually. But if they contact me and ask me out again, I’ll just respond by email saying, “It’s been great getting to know you and I really enjoy hanging out with you, but I’m definitely getting more of a friend vibe and that’s not what I’m looking for right now. Wish you all the best!” Done and done. I usually don’t hear from them again after that.

I think I can actually can say that I’ve never done the slow fade. I, instead, developed a script, which went a little like this, “I’m not feeling what I think I should be feeling in order for us to move forward.” Ha!

So when I was a freshman in college this guy I sat next to in one of my classes asked me out. I’d actually never been on a date before, and I was maybe kinda sorta a little bit awkward and shy anyway, so the whole thing was pretty terrible. At the end of the night when he asked if we could do it again sometime, I was all “sure! of course!” because that is how a polite person responds, right? Aaaaand then I proceeded to be conveniently late to that class every day for the rest of the semester. And I suspiciously had a sudden urge to sit. any. where. else. Oh, I was just adorable.

I have managed to end virtually all of my relationships with major blow-ups! Ha ha. But I have slow-faded a friend or two. My problem is that I’m very introverted. Friendship to me does not mean knowing every single detail of a person’s life at all times. After being passively-aggressively told “It’s been so long sine we’ve SEEN each other!” (which basically means, “You are not checking in with me enough!”) a few times, I pull the slow fade. I am just not a good friend match for somebody who needs (or wants to give– I feel smothered soooo fast) constant attention!

I could never slow fade.. in fact the guy I dumped three months ago and I had a really honest “3 months later chat” in which we laughed about how much we hated each other after the break up, stupid things we said and we both apologised if we had hurt the other at all.It makes life so much easier to be up front about everything and have a laugh.

It is crazy to me that so many say that they slow fade to avoid being “mean”! But if it is after more than just one or two dates, I would say that it is way meaner than being honest! The slow fade tells someone that their feelings are way less important than just an awkward moment for you.

I’ve done it a few times, but will usually be dirct.

Before I was married, I had it done to me several times and found it rather painful. That didn’t stop me from doing the same thing to other people though! I’m not a fan of confrontation, so it’s easier to take this route, though not as kind or respectful. Oh well!

I’ve never done it to a guy, but I’ve had it done to me a number of times, and it’s not nice. When I’ve had to have the ‘conversation’ I’ve just taken a deep breath, and said I don’t want to date anymore & then we both know where we stand. But I’ve been faded out by guys before, and it can be torture, waiting and waiting for their call, wondering if they’re busy or just not interested because the last time you had lunch it was so nice etc etc. It messes with your head. I believe it’s better to rip it off like a bandage, get it over with, & everyone’s better off.

Ahhh this is totally my weakness…I am horrible with confrontations

Personally, I think if men are too scared to man up and be honest with you when they’re not that into you, I see no reason we have to make an effort. Dating is a rough sport – might as well do what you want whilst being on the battlefield!

I’m slow fading from one guy right now… the sad thing his not getting it! I might need to talk to him.

Ugh, I hate to admit it but… I always do the slow fade.