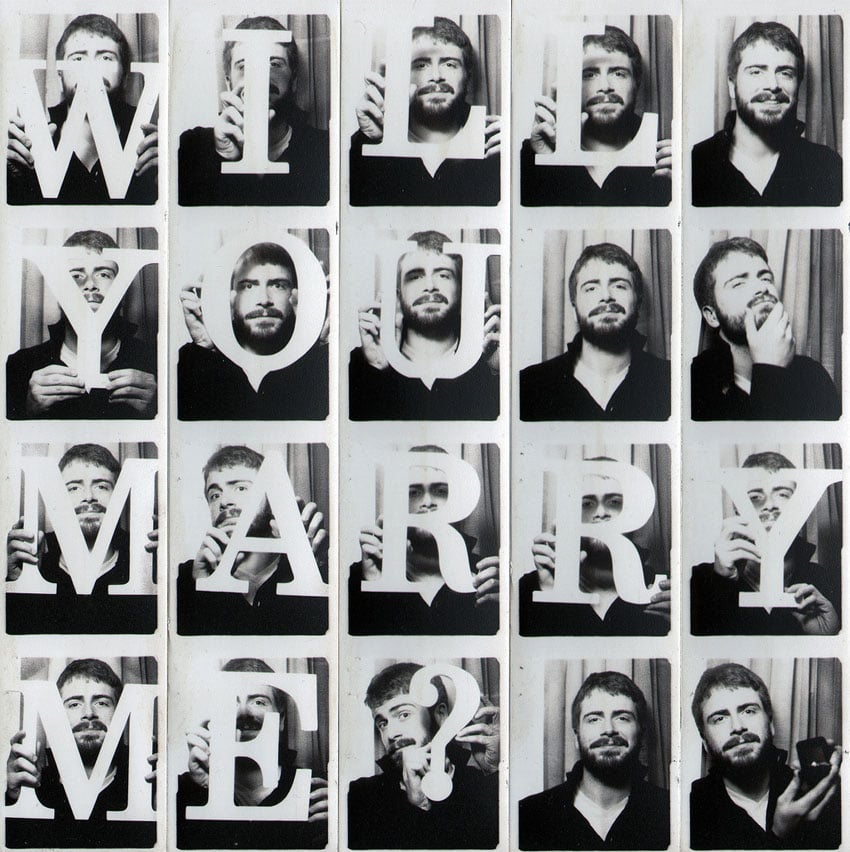 Pete wanted to propose to his girlfriend Shannon, so he went to a Mexican restaurant and spelled out his proposal in a photo booth. And it was harder than it looks: “He told me he only had the exact change for five strips,” says Shannon, “because he didn’t realize they were $3 each, so he was really nervous that he was going to mess up the order of the letters. Thus him making a ‘Oh my god, I hope I got this right’ face in the last photo.” Pete then stuck the strips on their fridge, and Shannon discovered it while they were cooking pasta. How sweet is that?

Tags: proposal
94 COMMENTS
WRITE A COMMENT
Relationships
most popular
01
Seeing My Body With Fresh Eyes
02
11 Wedding Dos and Don’ts
03
How to Write a Condolence Note
04
A Love Letter to My Anti-Anxiety Medication
05
How to Be a Better Listener
May We Suggest…
By Joanna Goddard
Relationships
How Cute Is This Marriage Proposal at the Met?
May 6, 2021

234 COMMENTS
By Joanna Goddard
Relationships
A Wedding at Home in Brooklyn
July 16, 2020

Fantastic idea for “Photo Booth”! We will definitely do something similar in the near future. Thanks for the post!

So creative! A guy that puts so much thought into a proposal is definitely a keeper!!!!

Cute. I love it whenever you can tell that the guy gave it some thought and made an effort. It wasn’t just like ‘hey wanna get you know.. married’ Adorable.

This is so sweet! And a great memento for afterwards – how cute would that look framed on their wall? love it!

IN LOVE WITH THIS!!!

i love the idea!

I cannot get over how adorable this is!

this is soooooo cute! such a sweet guy! :)

Love this! So clever! Thanks for sharing

So cool way to propose :D

I LOVE THIS. Sometimes I wish I had the man’s job of thinking up something creative like this. But since I’m not, I’ll just have to cross my fingers that my boyfriend will think of something genius. If he doesn’t, I’ll just have him re-do it.

SERIOUSLY the cutest thing ever. Gonna make sure I show this to my boyfriend. *wink wink*

Oh gosh, I love it! So creative, so sweet.

I am SO in love with this!! What an awesome idea!

Super cute idea. I love it!

This is amazing! Love the creativity!

I was blessed to be able to make the letters for this proposal. When I first saw the picture, I was awed. Congrats to the both of the couple.