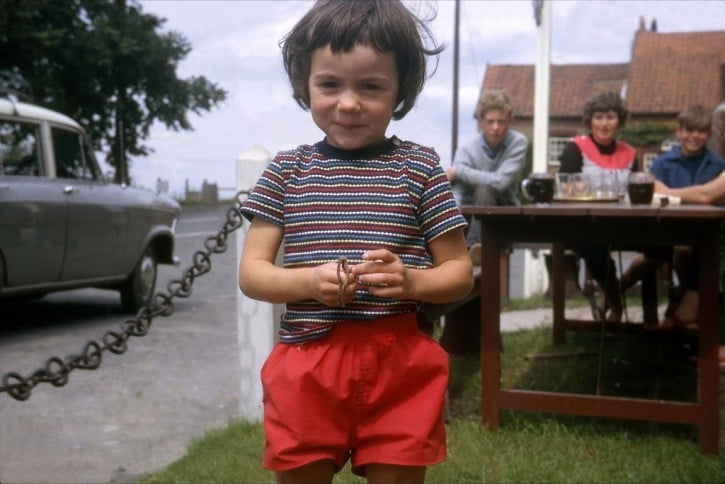 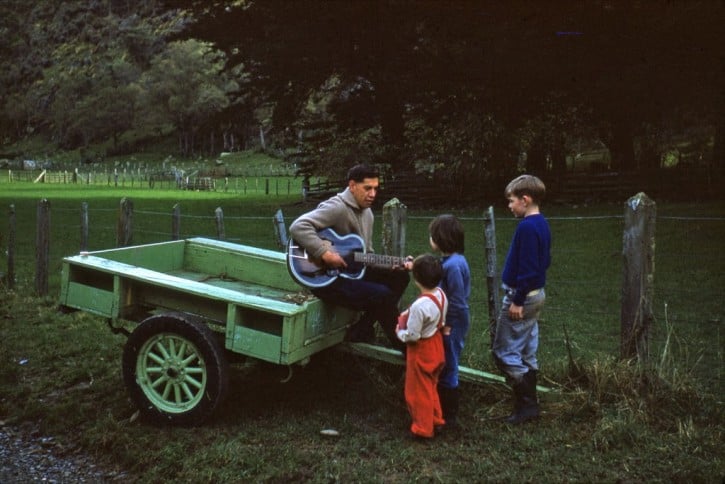 My grandparents lived in England almost all their lives, but in 1955 they moved around the world to New Zealand for six years. At the time, they had three little kids–my dad, the oldest, was just four years old. “We wanted to get out of post-war Europe,” my dad remembers. “New Zealand was full of sunshine and light.” 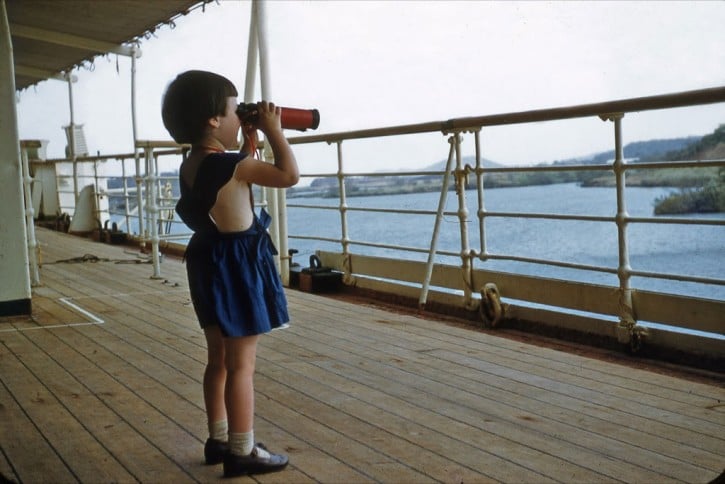 My aunt found some old family photographs (on slides) recently, and they’re amazing for us to look through. “It was fantastic, just fabulous,” remembers my dad. “Sailing, surfing, beaches, mountains, the most glorious place for outside living.” 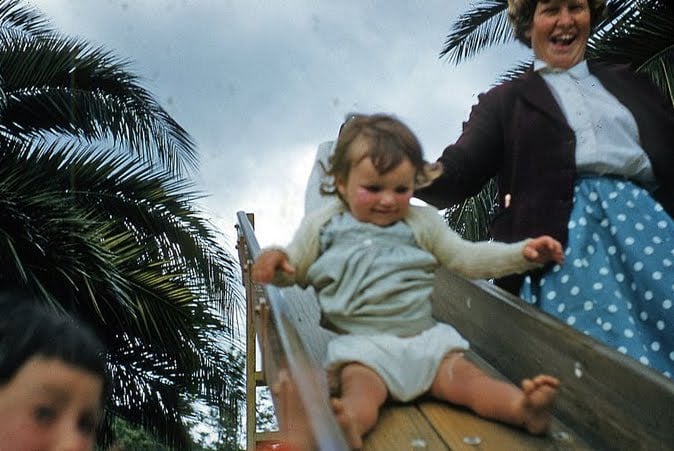 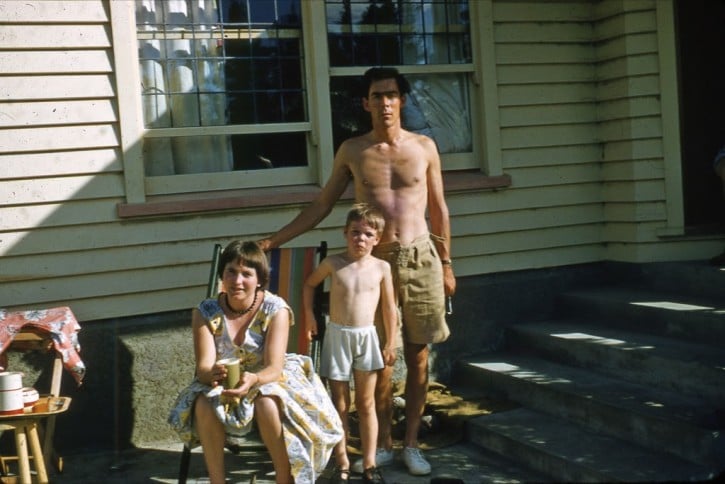 My grandfather got a job at the University of Christchurch, and the family lived in a little bungalow. We looked up their address on Google maps!  9 Champion St, Christchurch, New Zealand. So cool to see the actual street. 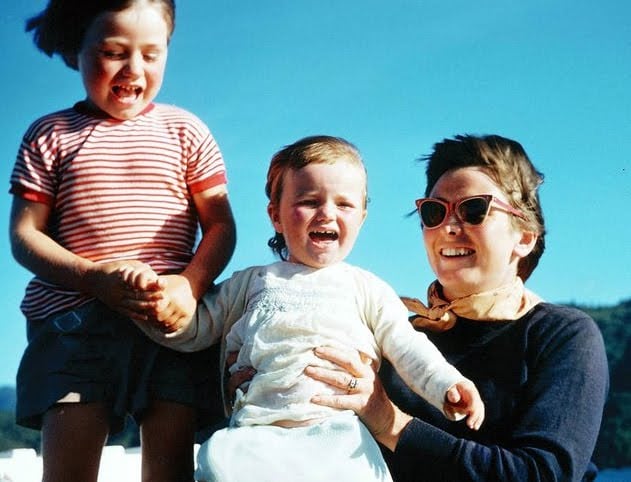 I asked my dad when he remembered about their time there, and he said, “We ate a lot of lamb. We’d buy half a sheep a week, which cost one pound. We’d get a shoulder, a leg, lamb chops, kidneys. The next Saturday, we’d get another half sheep! A half sheep would do it.” 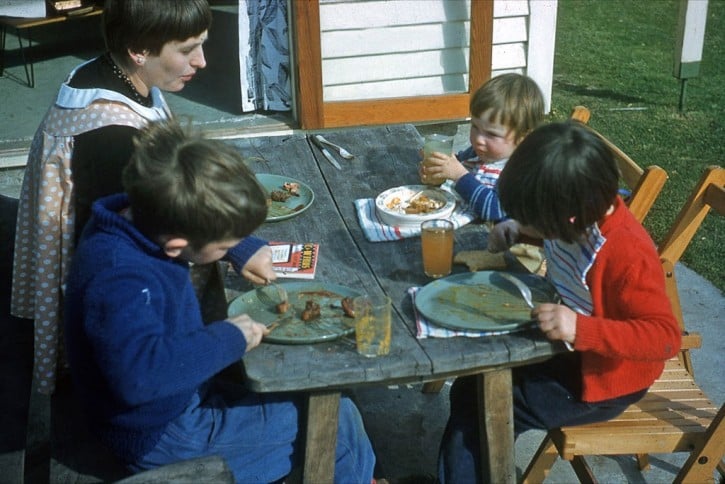 “We also had a pet lamb in the backyard,” he said, “A family friend of ours was named Angus Lamb (a real person), so when we got an actual lamb, of course we called him Angus!” 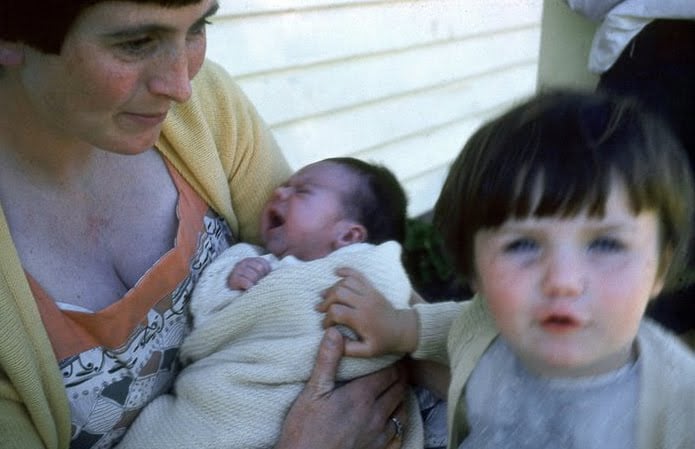 During their six years in New Zealand, my grandmother had a fourth baby there–my aunt Lulu. 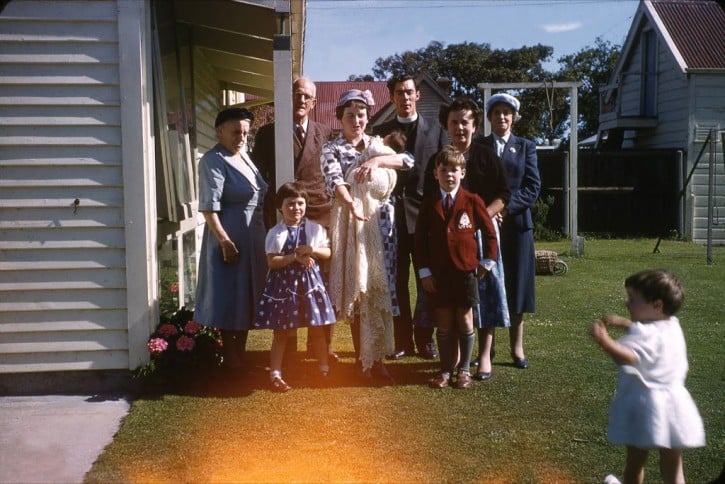 My dad, who was five in these christening photos, is wearing his red school uniform. “One thing (that still happens in old-fashioned families) is that English boys wear their school uniform when they want to look ‘smart,’ ” said my aunt. 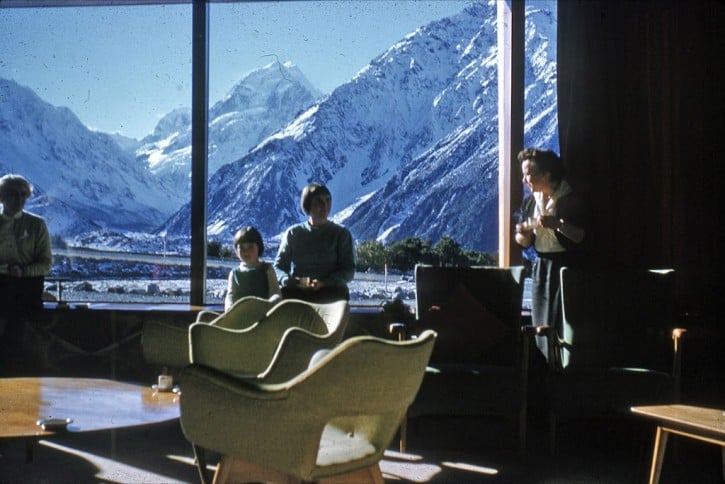 Here, they were on vacation at The Hermitage Hotel, which had just been built. “It was state of the art,” said my dad, “Glorious big windows, modern, exciting. We usually camped, so this was quite a treat.” My aunt Jackie, who is the little girl in this photo, remembers: “I remember swearing and my dad made me apologize to the manager. We skated on the wood floors in our socks, and saw snow for the first time. I was not allowed up the glacier, which really riled me; I was too small.” 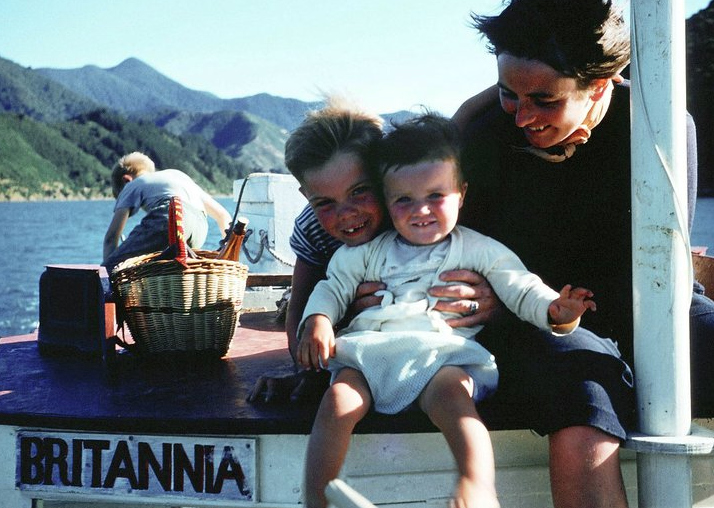 I think my dad looks just like Toby here! 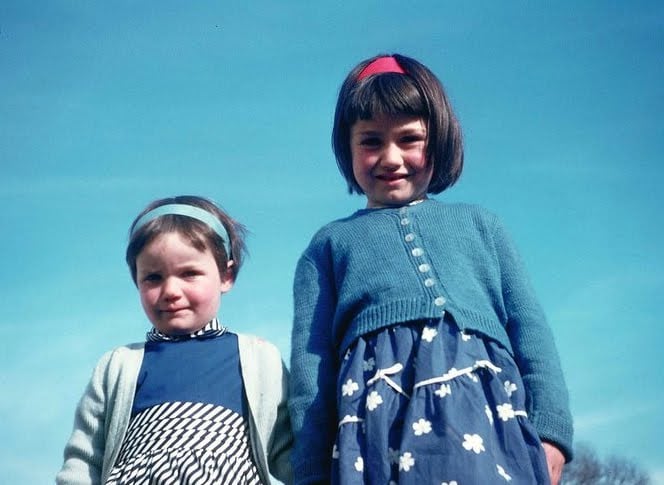 Tags: family, personal, photography
11 COMMENTS
WRITE A COMMENT
Design
most popular
01
My Sister’s Home Makeover
02
John Derian Lives in a Sea Captain’s House
03
What Are Your Top Three Books?
04
The Ultimate TV Guide (If You’re Looking for Something Great)
05
Behind the Scenes: Making a Magazine Cover
May We Suggest…
By Joanna Goddard
Design
The Dinner-Changing Magic of Candlesticks
June 24, 2019

So glad I found this post! I worked at the Hermitage Hotel for 5 months and it is stunning up there :)

After along time when you come across some old pictures they looks as from some other universe but your pictures looks great.
job in new zealand

Agree with all the other comments about the remarkable colour and clarity of these pictures – go, slide film!!

I am an Australian living in Brisbane but have been to NZ three times…and I’ll just keep going back!

It is a magical place! Most recently, I spent my honeymoon in the South Island last November…best holiday ever.

You should visit one day!

Thank you so much for posting those old pictures of your family in New Zealand.

I am from New Zealand too. I used to live in the inner city of Christchurch. I moved to live in the beautiful Queenstown, South Island, after the devastating earthquake. I was working at the hospital when the 6.3mag hit as I was about to finish my duty at 1pm and was busy writing medical notes. It was a very tough decision to make and finally I had to say goodbye to all my friends, neighbors and colleagues. I am feel so happy here in Queenstown. The stunning scenery of the lakes and mountains just blew me away – can’t get enough of them. I love the lifestyle here, the space, the fresh air, the people, the beauty of New Zealand, sigh, I love NZ always.

This post just made me shed a little tear. I’ve been reading your blog for a few years now and I love it, introduced it to a work friend and she makes the daily read too.
Christchurch is getting back on its feet more and more everyday and you should deffinately make the trip down to see it.
I was there the day of the first earthquake and back in AUckland since and wish I could jump on a plane and go back, broken buildings or not.

What amazing images! Thank you for sharing this piece of your family history with us!

Hi what a great read and like lots of other people leaving comments, I had to add my 2 cents worth as a New Zealander. We are such a proud nation and get excited when we see our wonderful country being promoted to the world. We really are a little slice of paradise. If you haven’t visited then you really should! Yes we’re the other side of the world, but well worth the trek!

New Zealand is amazing! I’m from Kansas (smack dab in the middle of the States), but I spent eight weeks backpacking New Zealand. It was the best time of my life. I loved your post. What a great story for your Dad to tell!

I found out about your blog through Cupcakes and Cashmere and I am happy I did! Another inspirational blog that I am addicted to checking into. As a ‘kiwi’ living in Beijing, coming across this blog from the States with an entry on New Zealand. I just LOVE how cultures collide. Making me feel homesick now too especially with the Rugby World Cup on!

Hee hee I live in Chch! And I have a friend who lives on that street! Is one of those photos of Mt. Cook?

I was just looking over some old family photos and they made me feel the exact same way when I looked at these. Remembering a sweet time long ago. Very beautiful pictures.