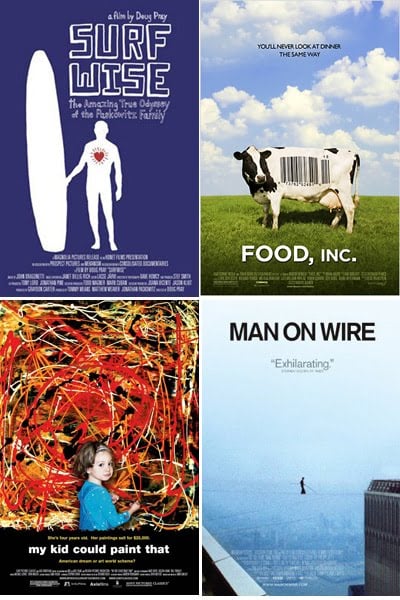 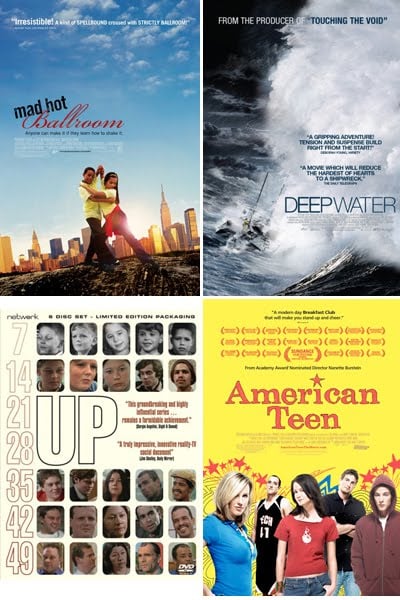 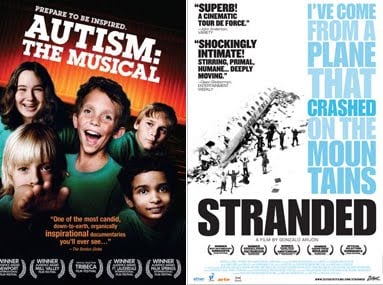 Do you guys ever watch documentaries? My friend Scott and I have a monthly documentary club, and I thought I’d share ten of my favorites that we’ve seen over the past couple years. I’d highly recommend them all…

Surfwise tells the story of the Paskowitz couple, who drops off the grid to drive their nine kids around in a camper and surf all day.

Food, Inc. examines the American food industry and corporate farms. Not for the squeamish!  We’ve bought only organic meat and dairy since watching this.

My Kid Could Paint That looks at the runaway success of a four-year-old girl whose paintings are compared to Picasso. But is she the real artist?

Man on Wire is a documentary about a wild French tightrope walker and his jaw-dropping (illegal) stunts.

Deep Water tells the gripping story of an amateur sailor who (insanely) enters a solo race around the world.

The Up Series is a series of incredibly compelling documentaries that have tracked the lives of fourteen English schoolchildren since 1964, when they were seven years old. Every seven years, the filmmaker releases a new documentary that checks in on their increasingly varied lives. (They’re now 53!)

Autism: The Musical chronicles five autistic children as they rehearse for a musical production.

Stranded lets the survivors of the famous 1972 Andes plane crash tell their story of survival.

Have you seen any other good documentaries? I’d love to hear!

Chef’s Table is a must.

Some of these look so interesting!

Winged Migration was really beautiful, and March of the Penguins was wonderful, but is super well known.
I think most of my favourite documentaries have to do with animals or birds

Every time I come back to read the comments here, I see more and more titles to add to my Netflix queue!

Two documentaries that are quite bizarre and disturbing but stuck with me!

1. The Bridge – a disturbing look at the high rate of suicides (more than any other bridge anywhere) that happen by people jumping off the Golden Gate Bridge.For one year, they filmed the bridge daily and captured 23 out of the 24 plunges to death, in addition to filming friends and family members of those who jumped.

2. The wild and wonderful White’s of West Virginia: http://www.wildandwonderfulwhites.com/

180 degrees south is a beautiful, scenic documentary with Patagonia as the backdrop http://www.180south.com/

180 Degrees South is so good! I have watched it several times and I always find it calming, beautiful and inspiring.

Another inspiring documentary: Reversing Roe – a must see.

Being a Michigan Native – you need to see Sugarman!

I love the list and all of the other recommendations. In addition to those mentioned, I really loved Dark Days – about people living in the subway tunnels in NYC – tough with redemption though. Also, liked The heart of the game – a female hoop dreams.

So many here that I love – here’s one no one’s mentioned yet: Birth As We Know It, youtube trailer here: http://youtu.be/nZtYCHASqNM. It’s about an alternative birthing method called orgasmic birth and is fascinating!

I would recommend “Love Hate Love” due to it being inspiring, I am also recommeding it due to my uncle Ben Tullipan being in it and telling his amazing story.
This film follows three families on a journey across five continents, as they strive to build world-changing legacies and prove that even the most horrifying acts of hate can be overcome by simple acts of love.

I just watched Happy on your recommendation above, and I am so HAPPY that I did. I’ve been in a bit of a blue place lately, feeling out of touch with happiness and with the role I want to fill in this world. After watching this documentary I feel reinvigorated and ready for what is to come. It really gave me that extra little boost that I needed.

On a related note, I want to thank you for what you do here on this blog. My roommate and I have been following you for the past couple of years, and we get such joy out of what you share with us here! Your candidness and your bravery and honesty are inspirational. Even the little things like posts about autumn colors or happy kitten video can really brighten up a day. I love reading your blog because you are so honest, and something about your honesty reminds me that I’m part of something bigger, that even though we may lead different lives, we are all in some way interconnected. I guess I’m posting a thanks because you deserve it. What you’re doing here is a really beautiful thing and I’ve just realized that I’ve never thanked you and yet you’ve given me and my friends such joy!

I love this idea and want to start a club with my friend. What is your process? Do you watch them separately, or with your friend? Do you watch multiple ones before getting together to discuss?

Reply
I dress myself

Art & Copy directed by Doug Pray about advertising and inspiration. If you like Madmen you will love this.

In the Realms of the Unreal a documentary about Henry Darger a reclusive artist.

Awesome selection. Watch them all at docolovers.com

Another good documentary I’ve seen recently is “Waiting For Superman.” It compares education statistics with a handful of school children, and shows how “drop out factories” are poorly impacting America’s grades and academic growth.

Great list, to watch all of these amazing documentaries check out
http://www.documentaryjungle.com/

I prefer fictional movies instead documentaries bore me to dead.

I just watched Senna, a documentary about the life and death of Formula One driver Aryton Senna. Heartbreaking, but absolutely amazing!

I loved Herzog’s Cave of forgotten dreams and Encounters at the end of the world.

You should watch a doc called A Man Named Pearl, it’s really good.

I see a lot of my favourites already – Young @ Heart, The Devil & Daniel Johnston and Tyson and Man On Wire and Touching the Void.

I also recommend Fuck – the story of the origins of this notorious word!

Life In A Day – the new doc by Kevin MacDonald. He and his team asked people on YouTube to document their life on July 24, 2010. They got 4500 hours worth of material and edited it…really interesting.

‘man on wire’ is one of the best i’ve ever seen. i must get to the ‘seven up’ films eventually.

Inside Job. Excellent. Every American ought to watch it.