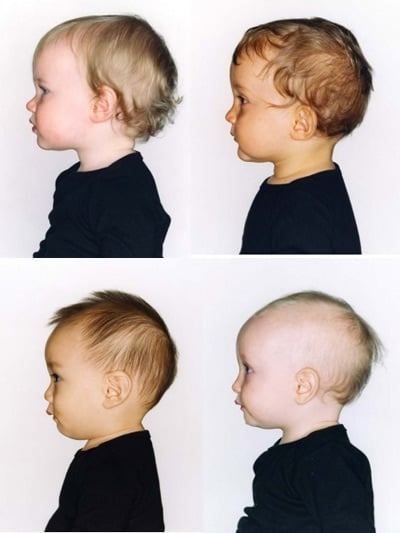 German photographer Bettina von Zwehl took this photo series of one-year-old babies at an instant of total (rare) concentration. Aren’t they gorgeous? Von Zwehl used toys, dvds and eye contact to get the little guys to stay still. “They sat on a table, looking at me, and I took the picture with a long cable release,” she says. Since many of the babes were still too wriggly to photograph, it took more than a year to get six final portraits. And the goal of the project? “I was hoping to present each baby as an intelligent human being,” she says.

P.S. Baby mouths are so adorable.
Tags: baby, baby photos, family, photography
75 COMMENTS
WRITE A COMMENT
Design
most popular
01
My Sister’s Home Makeover
02
What Are Your Top Three Books?
03
The Ultimate TV Guide (If You’re Looking for Something Great)
04
Catherine Newman’s House Is a Joyful Jumble of Books, Games and Cats
05
Behind the Scenes: Making a Magazine Cover
May We Suggest…
By Joanna Goddard
Design
11 Cool Ways to Display Family Photos
April 27, 2020

I am thoroughly convinced in this said post. I am currently searching for ways in which I could enhance my knowledge in this said topic you have posted here. It does help me a lot knowing that you have shared this information here freely. I love the way the people here interact and shared their opinions too. I would love to track your future posts pertaining to the said topic we are able to read.

How adorable. It’s amazing that they look so focused.

There is nothing better!
These little ones are adorable!

I love this! Baby mouths are so cute. Followed closely by their cheeks. x

you should see this trailer of a documentary called ‘babies’, absolute cuteness :)

Tell me about it!

Oohhhhhhh, I love this! I have a profile of my boy when he was a baby…it’s one of my favorite photos.

Love your blog and just wanted to update you on your Nursery animals blog that you posted some time ago, i got the hippo for a family baby its sooo amazing, haven’t given it too them yet, the baby is over due and just isn’t ready to come out! a shy little boy, Albie! I can wait to meet him, some other cute things i got from one of your sponsors for both my self and the bubba, on my blog, Im thinking i might need to take some photos, any way just thought you should know its just as perfect as you thought!

Marc could sit still for a photo like this! ; )

The photos are beautiful and interesting. Babes are totally brilliant, they know what’s up.

I love profile silhouettes. I even did them for our wedding invitations – thankfully I lived in a small town and they weren’t overly trendy there yet!

Ha ha, baby mouths ARE adorable! This is so sweet, and it must have taken a great deal of time and patience to get them to hold still. I know first hand!

I want to squeeze that little one on the bottom left–SO cute!

oh my goodness! can i have all of them? ;) they are too precious for words!

OMG, I want to squeeze their cheeks, very gently of course!

I was thinking the same thing about the little mouths! Their little lips are so perfect.

This picture is so cute!!! for an adult is a good idea too ;)

oh i just melted. these are too cute.

this is amazing. i think it’s wonderful that she wanted to show off the intelligence in babies. there’s so much of it in them! and we often overlook it because they’re squirming and gurgling all the time. this is beautiful! =]