An Eclectic Home in San Francisco 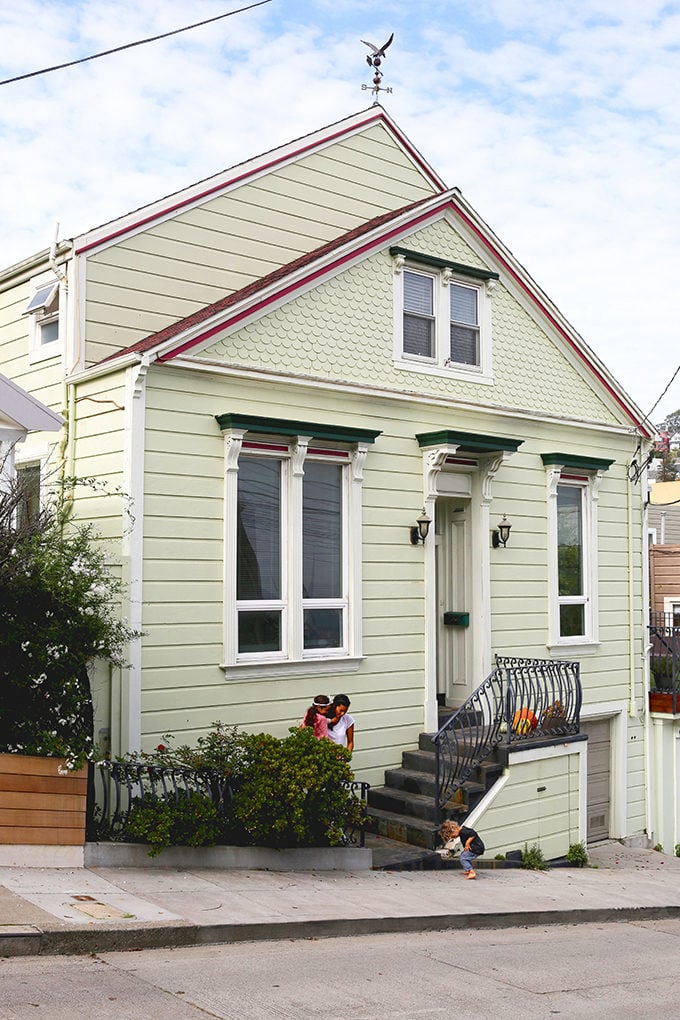 Photographer Sandra Ajanaku and her husband, James, are decidedly international. She grew up in Nigeria; he grew up in England. They met in London, then lived in Amsterdam for 11 years before moving to New York. Now they’re testing the waters in San Francisco with their two children, Olana and Theo. Here’s a peek inside their Victorian home… 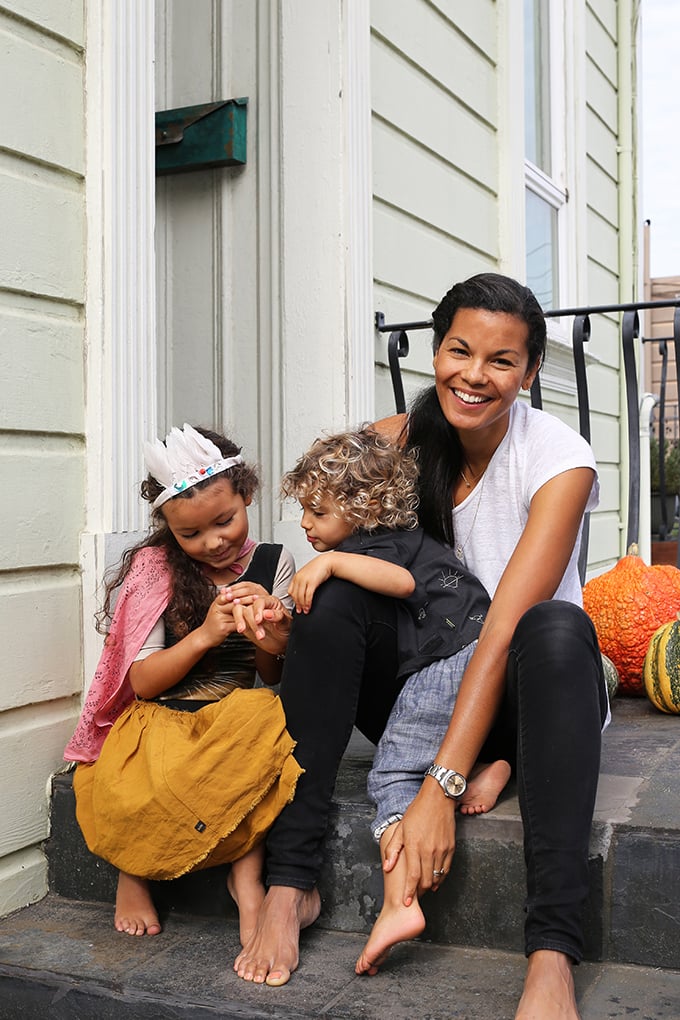 On being nomads: Being nomadic is part of who I am. I’m half-Dutch and half-Nigerian. I grew up in Nigeria and went to an American international school. I had friends from Israel, Lebanon, India, Denmark, America — which had a huge impact on me wanting to see the world. James and I have traveled a lot together. But once we had kids, it seemed like when we traveled we spent most of our time on the playground. Coming to the United States felt like a way to continue living the life we enjoy, but in a way that works with kids. We’re not traveling, but instead immersing ourselves in the culture. 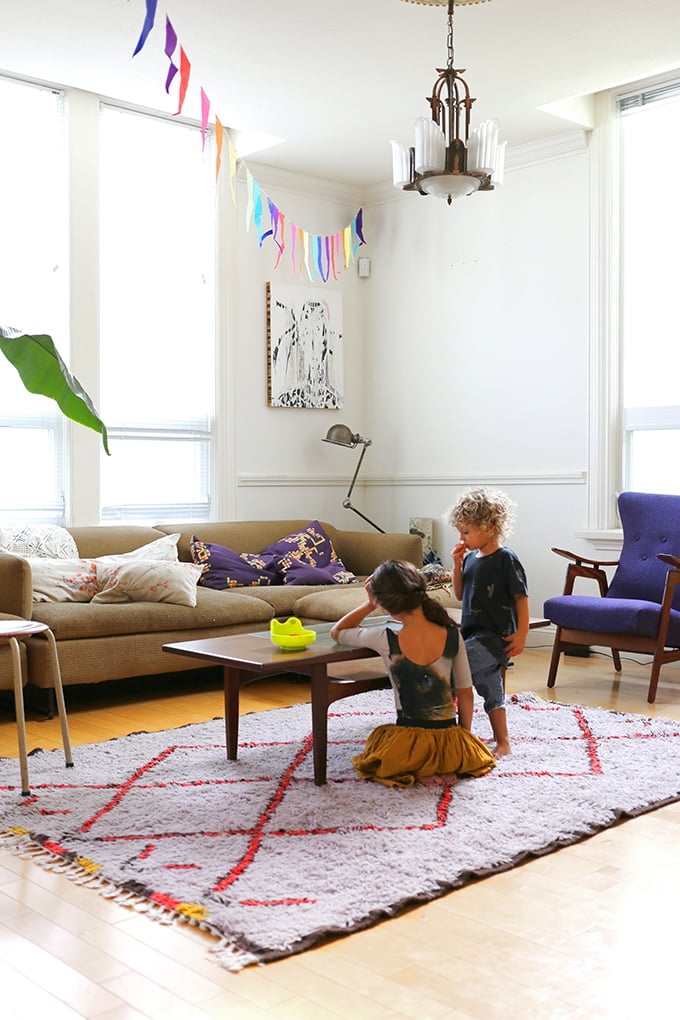 On finding pieces: So much of what is in our house is found. Once, while walking around Amsterdam, I found a 1950s Danish chair on the curb. Someone must have thought it was junk, but I put it on my head and walked home with it. We got it reupholstered in purple fabric — and probably ended up paying more than if we had bought it from a store!

On balance: Our house back in Amsterdam was very modern, so we didn’t buy much modern furniture, because everything would feel a bit too soulless and stark. But then we moved to this San Francisco rental, which is much more traditional with the old moldings and doors. All of a sudden it feels like we had so much old stuff. It’s all about balance. But it’s furniture that we love, and we’re making it work. 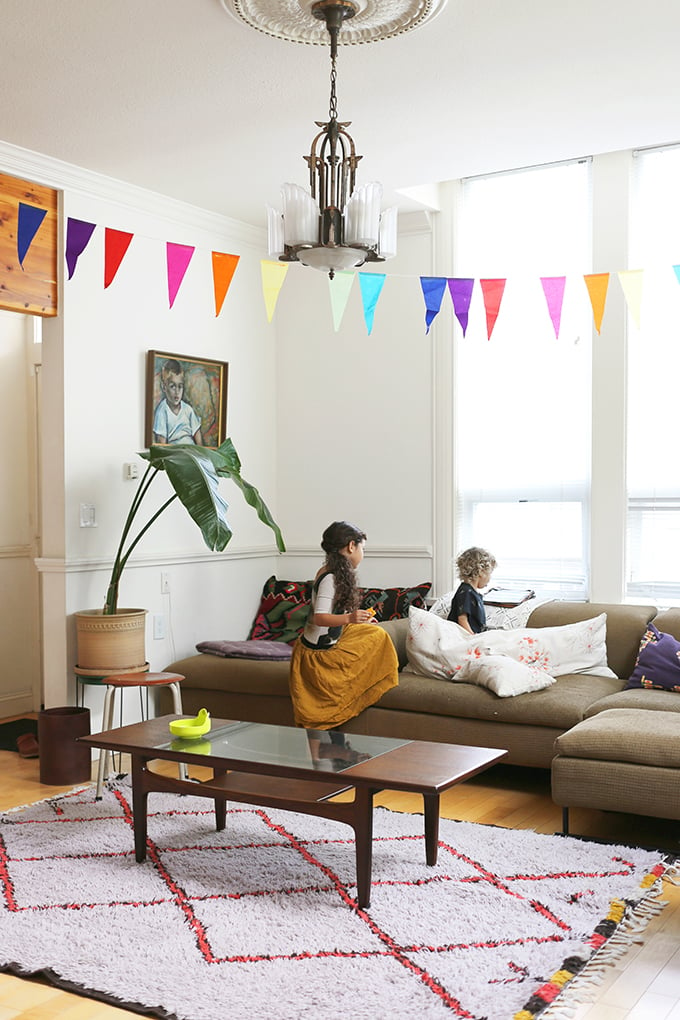 On Moroccan rugs: James and I have dear friends back in Amsterdam, and we joke that we are all married to each other. We all signed our official marriage papers together, and actually said, “Do you James & Driss take Sandra & Bettina…” It was hilarious. Driss sells amazing handmade rugs from the town where he grew up in Morocco. They also customize rugs: We fell in love with a rug we saw in Morocco during our wedding, and they made a replica for us. Now it’s in our living room. 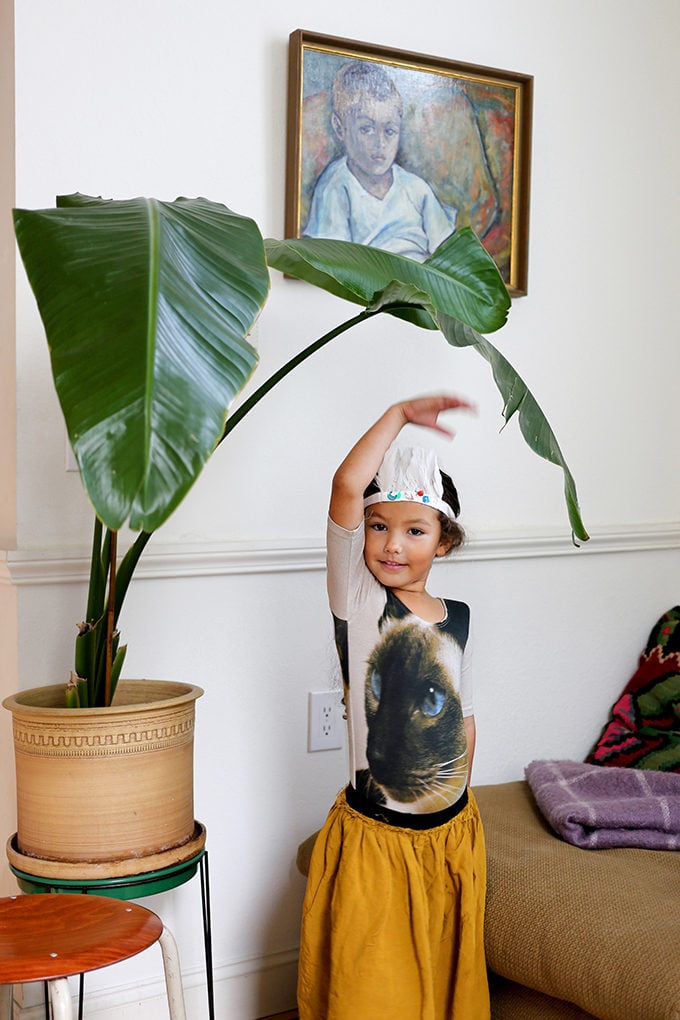 On portraits: Recently I went to Stuff, a vintage warehouse in San Francisco. For some reason, this painting of a boy was calling to me from the other side of the room. Something about it reminded me of Theo, like it could be him in six years. It’s a portrait by the Carmel-based artist Virginia Sevier Rogers of her son. James thinks it’s weird, like we have a portrait of someone else’s kid, but I love it. We also have a painting in our bedroom by the Dutch artist Chris Berens of a little ballerina. We spotted it in the Nieuwe Spiegelstraat (antique district) in Amsterdam, and I fell in love with his dreamy style. It was before we had our daughter, but she was very much wanted at the time. Now I look at it and see her 100%. 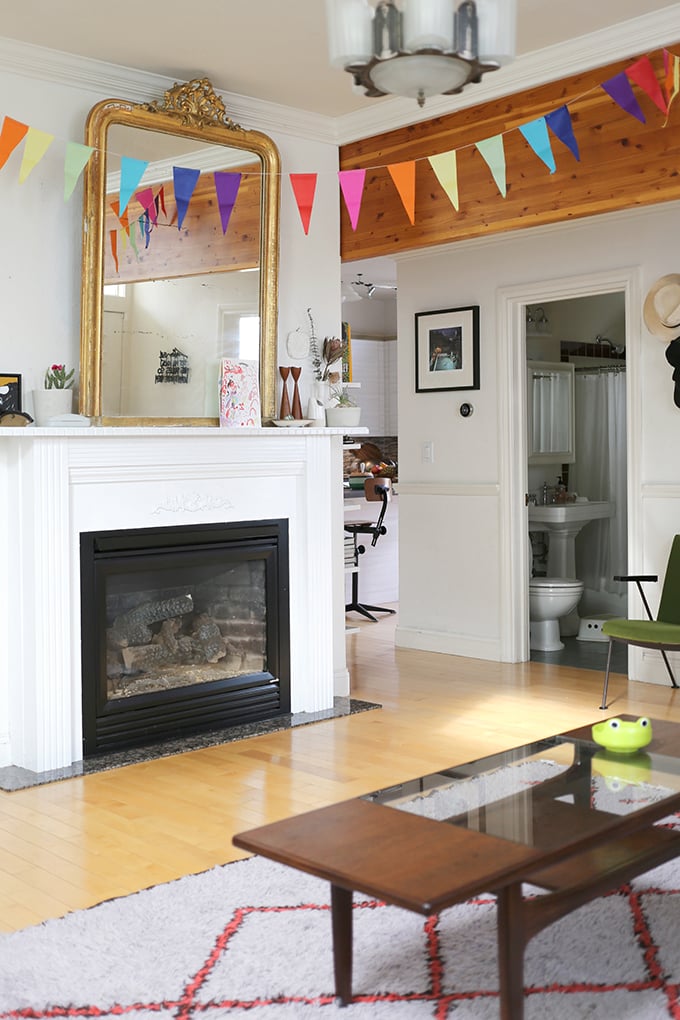 On Mad Men: My husband lived in student housing back in college. The owner of the house didn’t care for this coffee table, and he let James keep it. We’re big Mad Men fans and used to watch it all the time. When the show moved into the 1960s, we realized that Don Draper had the exact same coffee table in his office — the exact same one! Everyone has a mid-century modern coffee table, but we were like, that is ours! 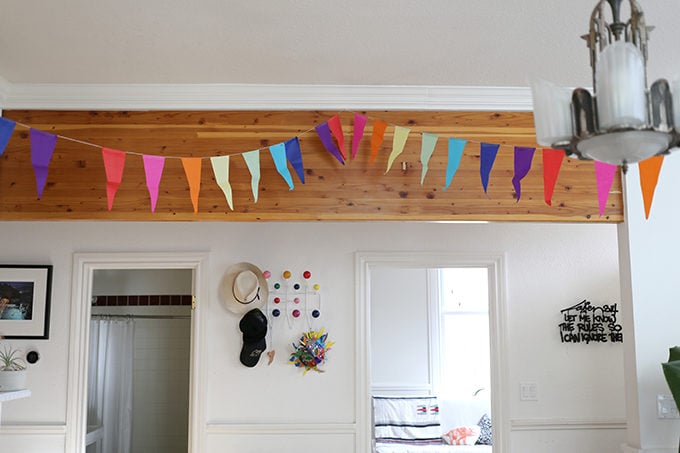 On Dutch traditions: We recently celebrated Olana’s birthday and decorated the house with bunting — a very Dutch thing to do. It’s also a tradition that the whole family gets congratulated on behalf of the birthday girl or boy. The kids and parents bring treats to hand out to everyone in their class and work. It can be confusing for people who aren’t familiar with the custom; you get into conversations like “Oh no, it’s not my birthday, it’s my daughter’s…” But I really like the idea of giving on your special day, and being congratulated on being a mom. 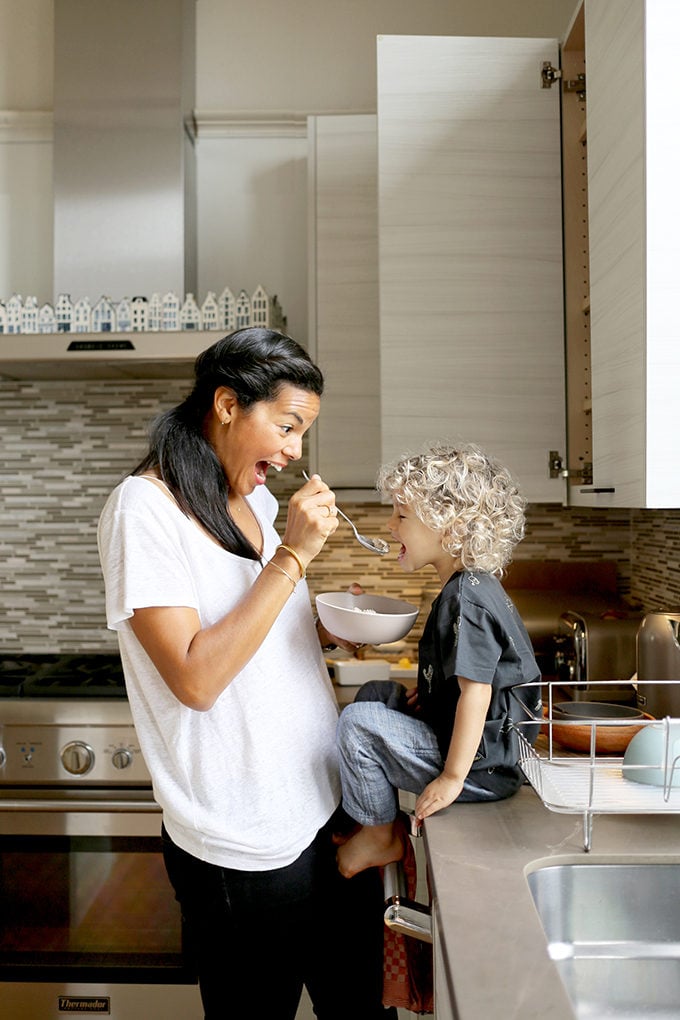 On stereotyping: My mother is a blonde, blue-eyed white Dutch lady. My dad is a beautiful Central-West African Nigerian. I realize now what an amazing upbringing that was and how lucky we were. It wasn’t really until we moved to the United States that I realized not everyone grew up the way I did. Since Olana and Theo have lighter skin than I do, people sometimes assume I’m their nanny or babysitter, versus their mother. We are all guilty of stereotyping (including me), but it makes me sad that some people have only seen one way of things and can’t help jumping to that conclusion. 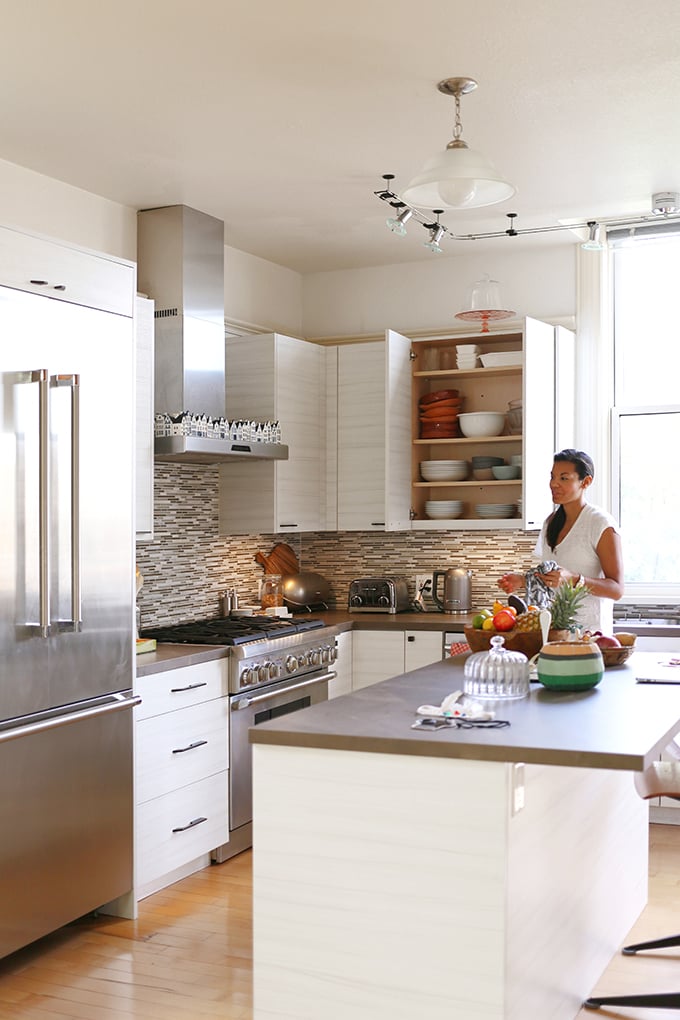 On cooking with kids: Before we had kids, James did most of the cooking. He enjoys it much more than I do, but he works late during the week, so now he’ll cook a nice meal over the weekend. The kids love chopping up vegetables; we let them use our bluntest knives. James is good at making the traditional stuff extra delicious, like lasagna and shepherd’s pie. We’ve also embraced American culture — we now have a BBQ! 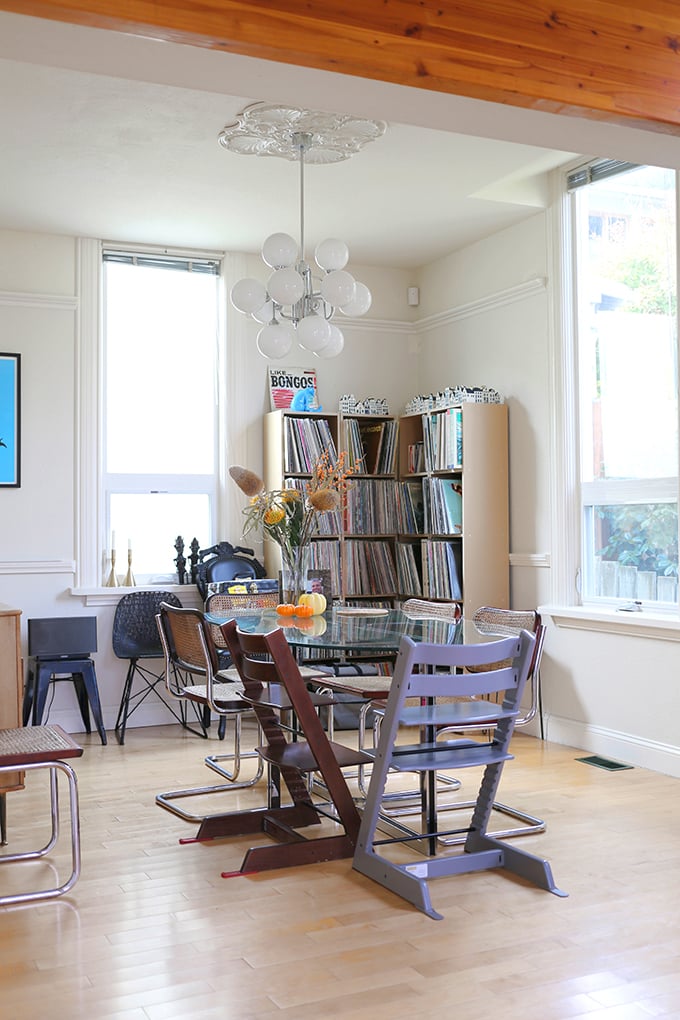 On high chairs: In Holland, everyone has a high chair from the Norwegian brand Stokke. They come in all different colors, and you can adjust the panels to grow with the child. We adults even sit in them from time to time. My parents gave them to us when each of our children were born. 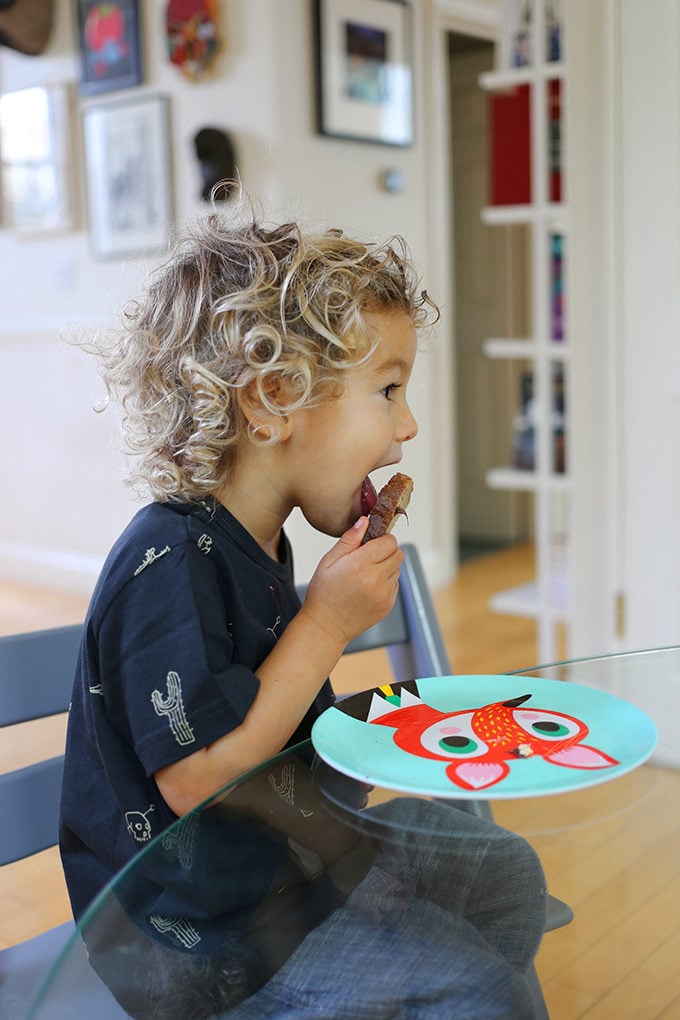 On chocolate for breakfast: We’ve all read the articles about Dutch parents being totally cool with giving their kids “hagelslag” (chocolate sprinkles) on toast every day. We do let our kids eat pain au chocolat and Nutella for breakfast — what can I say, we love chocolate! Some of my American friends comment ‘lucky her’ as Olana eats her pastry and they feed their kids carrot sticks. I wish! Olana is not the most adventurous eater, so after a couple years of feeling despair and guilt and basically making every meal a scene, I decided to let go. I figured a pain au chocolat a day wasn’t going to hurt anyone. Anyway, chocolate is good for the brain, right? Everything in good measure. 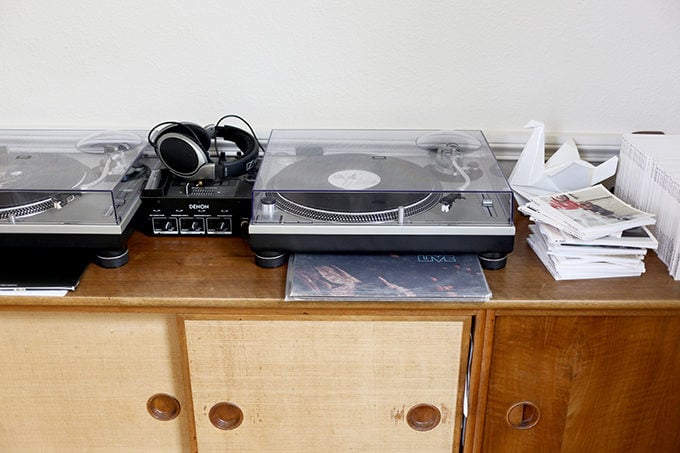 On music: My husband James has an amazing love for music, and I fell in love with him alongside falling in love with his music collection. He’s really into old school funk, ‘70s soul, ‘80s rare groove and ‘90s hip hop. We worked for the same ad agency in London, and he DJed parties and played bongos. Lately, the kids have gotten into listening to music, too. Theo will say ‘Another one?’ and run over to pick his own record and place it on the turntable ‘by myself!’ It’s like a music potluck — a super fun thing we do on the weekends. 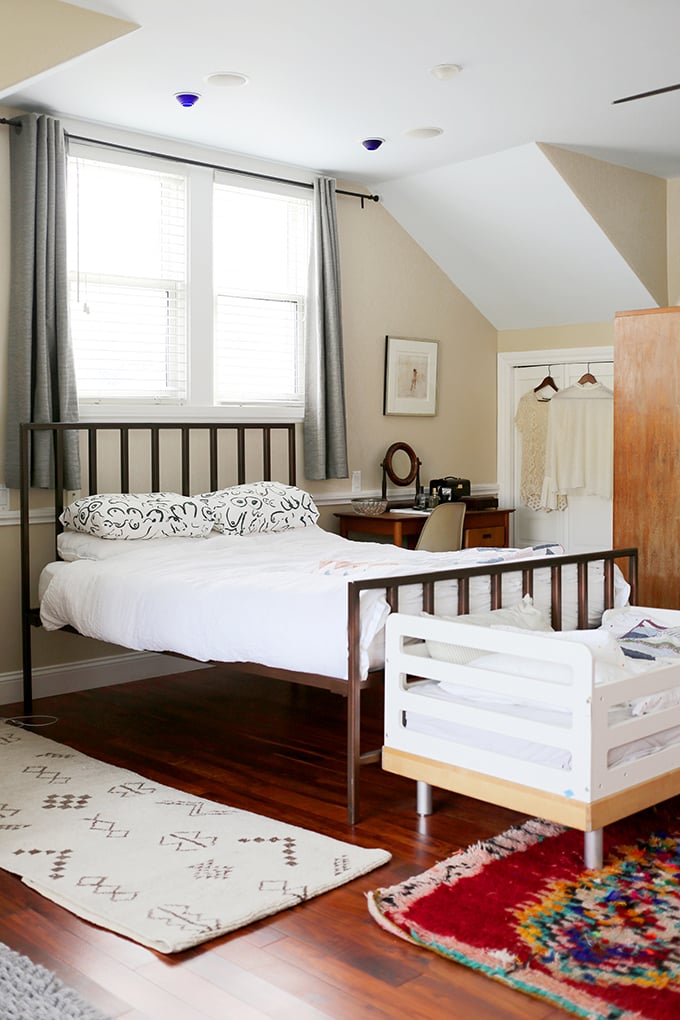 On making friends: My best friend in San Francisco inspired me to get these boob pillows. We first met because she posted a rattan peacock chair on Craiglist, so I went to her house to take a look. She was selling it because her husband was like, ‘We don’t need anymore furniture,’ and I ended up not buying it because James was like, ‘We don’t need anymore furniture.’ She had a bag with this print, and I told her I loved it. It’s made by the San Francisco brand Gravel & Gold. Their store was right around the corner in the Mission, so she invited me to go with her. My husband isn’t quite sure about the pillows, and people don’t quite know how to react, but I think they’re fun! 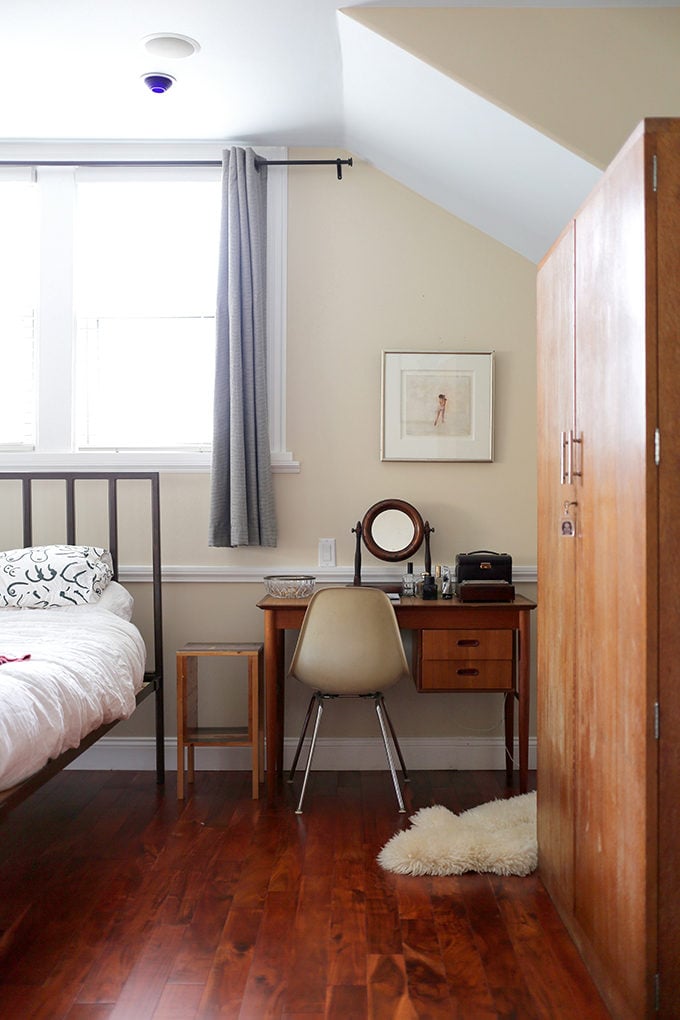 On staying in touch: We do everything we can to stay in touch with friends and family: we call, we FaceTime, we WhatsApp. And, I’m a MASSIVE over-user of Facebook and Instagram. I know so many people hate it, but for me, it’s the best way of staying connected with loved ones around the globe. True, the medium can feel less personal, but I balance that out by sharing my honest opinions and inner thoughts. 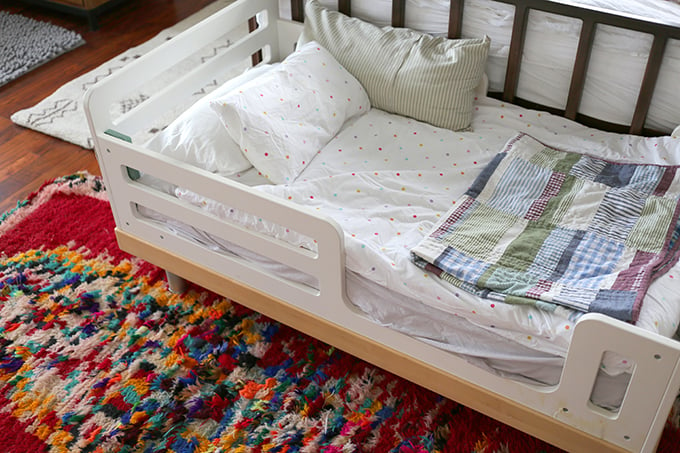 On co-sleeping: You know all those things you think you’re going to do as a parent… and then all the things you end up actually doing? I didn’t think I would co-sleep with my children; it wasn’t something that was important to me. But once I was a mother, having them by my side was very special. It was also convenient. Neither of them took to a bottle, so I didn’t have to walk across the hallway every night when they woke up. We used to have Theo’s bed in the kids’ room, but he’s always sleeping in our bed, so we just moved it in here. He’s our last baby, I know it. We will soon hit the phase where he won’t want hugs and kisses, so there’s no rush. He’s our little hot water bottle. 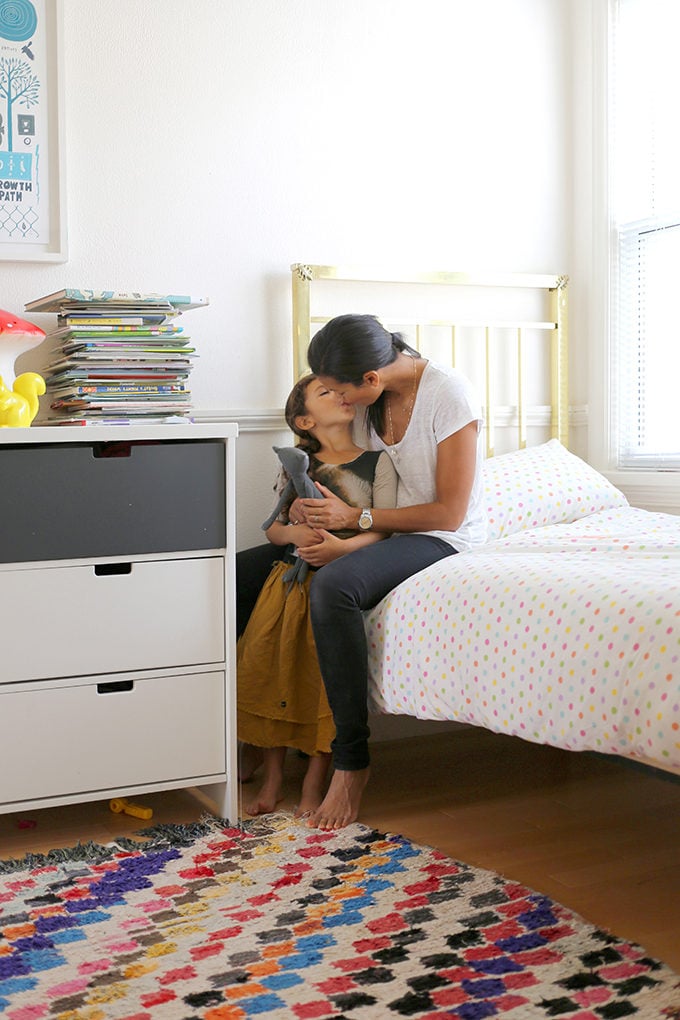 On the kids’ beds: Olana’s brass bed was passed down to her. Her paternal grandfather used it, James and his sister used it, and now it’s her “princess bed.” Olana generally falls asleep during the third book we read her at night. 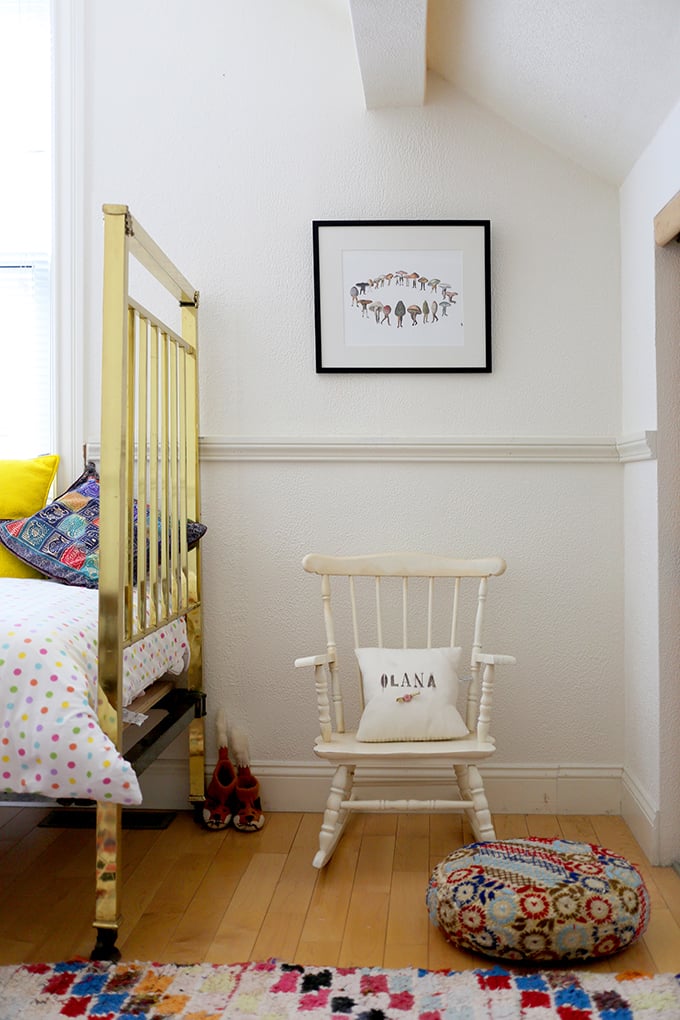 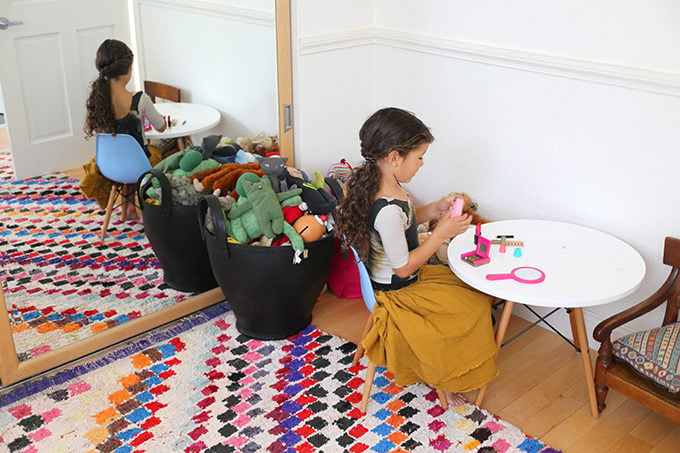 On kids’ fashion: Olana is really into fashion, it’s her thing. For her first year, I was buying a lot of unisex, white, grays, and blacks, thinking she was going be the most stylish kid and wear all the stuff I love. But then she discovered pink. I don’t know where that came from, but from early on, she was headstrong about what she wanted — and didn’t want — to wear. 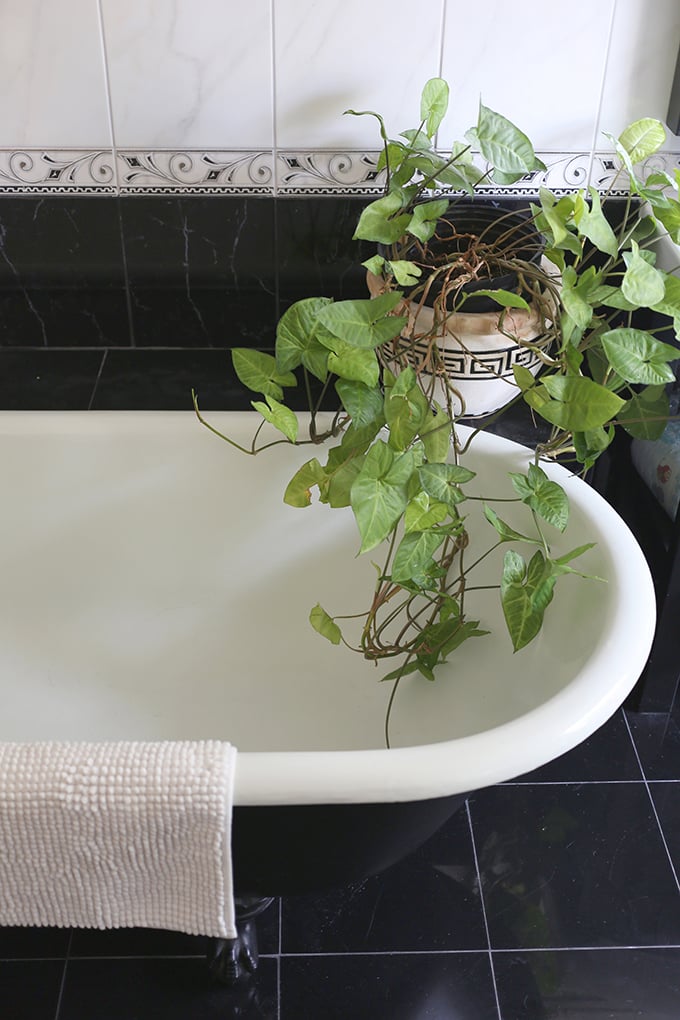 On end-of-day baths: I used to take morning showers. But after I had my babies, in those crazy first months, I felt like I didn’t have the time. Somehow it was easier to bathe in the evening. James was home from work, he would watch the kids, and it ended being my moment. It was the only time in the day that it was just me. The kids now have a bath every single evening. Maybe I projected that onto them, but now I feel like that nightly cleanse is so important. It’s the best way to end the day.

Thank you so much, Sandra!

P.S. More house tours, including a New York apartment and a colorful home in Utah.

(Photos by Lena Corwin for Cup of Jo.)