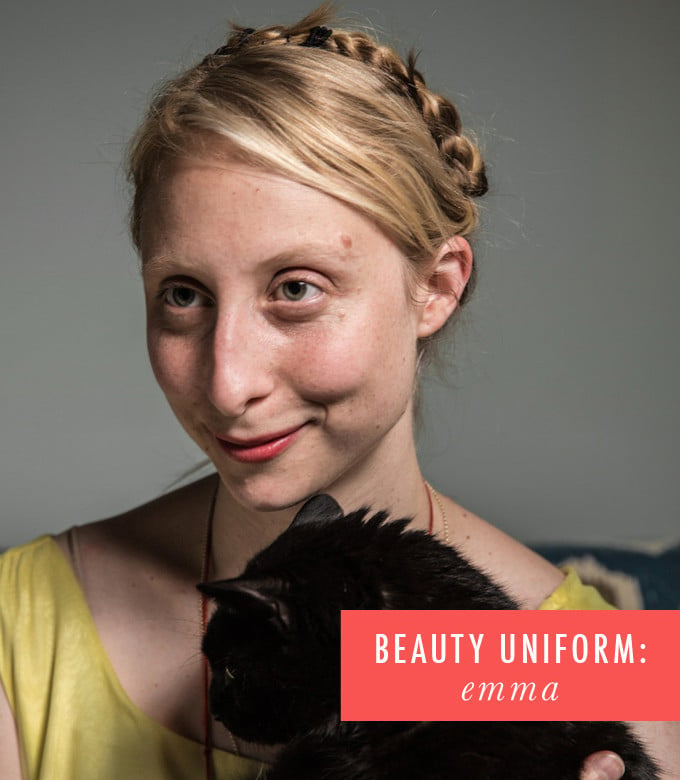 Emma Straub, author of The Vacationers and Laura Lamont’s Life in Pictures, lives in Brooklyn with her husband and two-year-old son (and another baby on the way!). Here, she shares her warm and funny wisdom on her go-to bright lipstick, her offbeat wedding accessory and raising feminist boys… 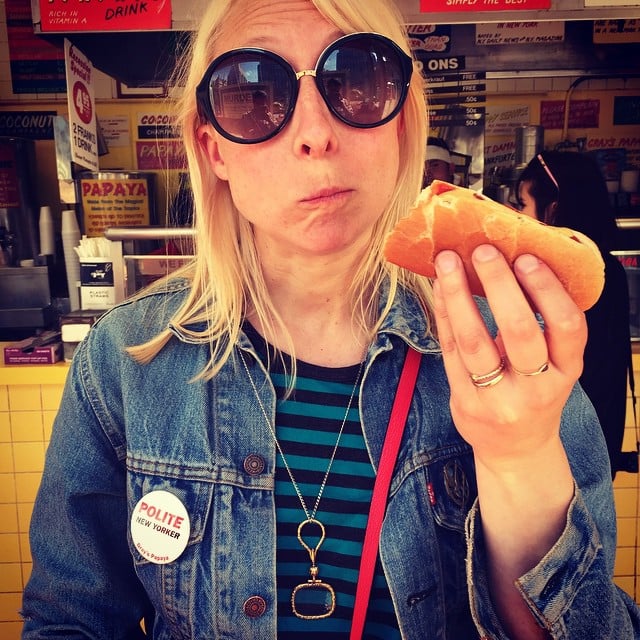 What is your everyday beauty routine? Which products do you use?
I have a friend who is a beauty editor, and every now and then I will send her an S.O.S. — like when I had a new baby and needed concealer — and she will send me a bunch of things to try. I use the concealor Bobbi Brown Tinted Eye Brightener. It’s liquid with a little spongy applicator like a lip gloss, and I’ll draw some polka dots or a smiley face or whatever and blend it in. 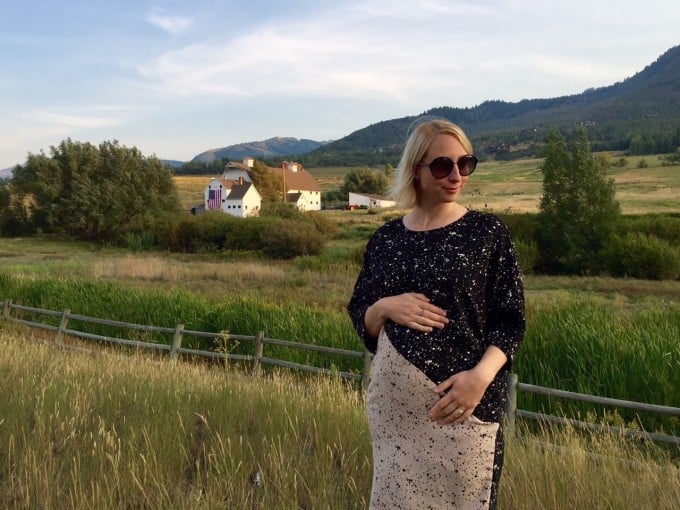 What about when it comes to skincare?
I’m into this Murad toner — it’s a spray that I use after I wash my face in the morning and night. I spray it into my hand, then pat it all over my face. It feels moisturizing and refreshing. When it comes to cleanser, I usually pick up Neutrogena Deep Clean Cream Cleanser, but I’ll really buy any drugstore cleanser as long as it’s inexpensive. I also love my Weleda Cold Cream Moisturizer, which is the thickest goop in the world. It makes you feel like you could go outside in 30 below and the wind would just slide right off your face. It’s soothing and gentle. I like to shove it on my whole face, but especially around my eyes. 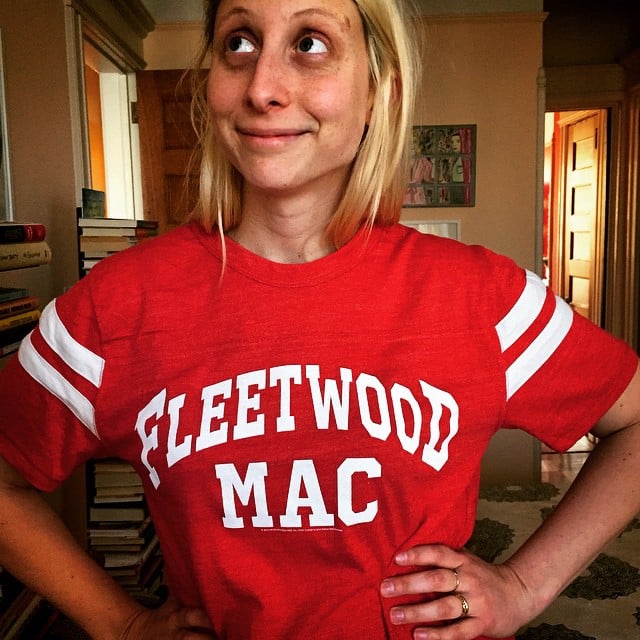 What makeup do you wear?
I use La Roche-Posay cream with SPF 15 everyday, and when I’m leaving the house, I’ll use their tinted CC cream, which is SPF 30 and helps even out my complexion, so I’m one color instead of blotchy. The other thing I usually wear is mascara. Once upon a time I bought an expensive mascara — it was Yves Saint Laurent purple mascara, and that was exciting. But usually, I use Maybelline Great Lash. Yes, it makes me feel like I’m in seventh grade, but it’s a classic. 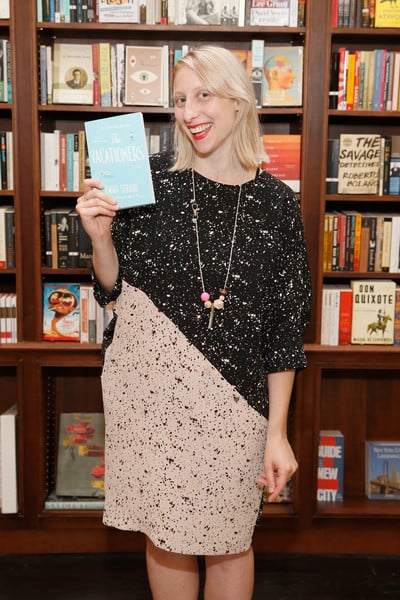 What about for special occasions? I’ve definitely seen you rock a bold lip.
Recently, I was asked to give a toast at the opening of a bookstore. A friend of mine works there, and he invited me. I thought it was going to be a small party, and then he said, “By the way, it’s you and Diane von Furstenberg, and André Leon Talley is going to be there.” So I wore heels and lipstick. That was my arsenal. My favorite bright lipsticks are Funny Face and Heat Wave, though I am also prone to buying lots of cheap red lipstick at the pharmacy. 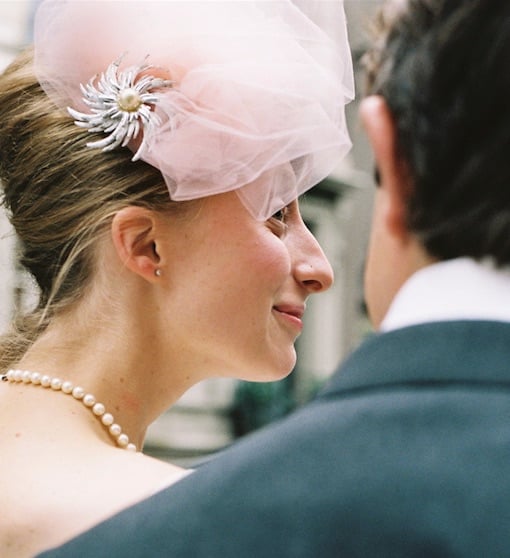 I’ve noticed you’re often photographed with headbands or scarves or other fun hair accessories. Where do you get those?
You have cracked my code! That’s the way I try to get away with not knowing how to put makeup on like a grown-up. I discovered ban.do back in 2008 or so — I think it was from a post on Cup of Jo — and ordered a piece for my wedding. It’s what I like to call my head tutu, because it’s made of pale pink tulle on a big vintage brooch. Having that made me feel so good, so I ordered a bunch of stuff from them. Now I have three hat boxes full of hair accessories. 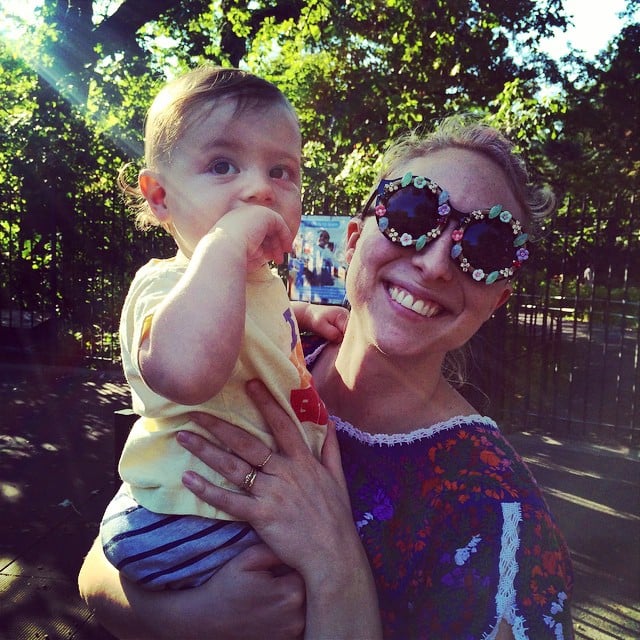 Are there any physical attributes you’ve learned to love more as you’ve gotten older?
I was never mocked for anything in a particularly harsh way, but I’ve always been much bigger physically than all of my friends. I’m 5’10” and kind of solid. I’m built like a tree trunk — a curvy tree trunk — so growing up, I never really compared myself with other girls in a way I think many girls do. This means I’ve always had like a surplus of self-confidence, even when it was sort of misguided. I remember very vividly when I was in the fifth grade I was at Betsey Johnson, which is still the greatest place in the world forever, and I was trying on this slinky Lycra dress. I had read that Cindy Crawford was a size six, and I was also a size six, so I thought, “I am basically a supermodel.” It didn’t matter that everyone I went to school with was still wearing kids’ sizes, I was like, “I AM A WOMAN. THIS IS ME.” 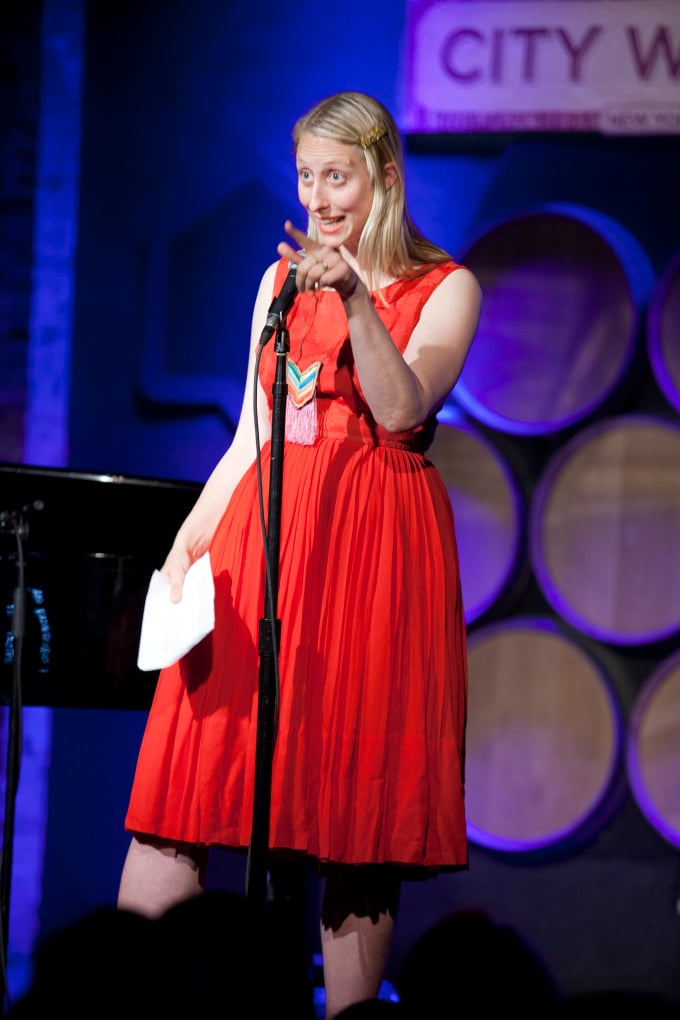 Are there any beauty things you’ve tried to master but just can’t?
For like three days, I was trying to teach myself how to do the whole liquid eyeliner thing. But then I realized, even if I got it on there in a way that felt satisfying to me, it took me so long to get it off that it wasn’t ever going to be a real part of my arsenal. I have occasionally bought various eyebrow-enhancing things, but then I don’t use them. My son told me recently that I didn’t have any eyebrows. This is exactly what my older brother used to say to make me very upset, but now as an adult, I’m just like, “You’re right, I don’t!” 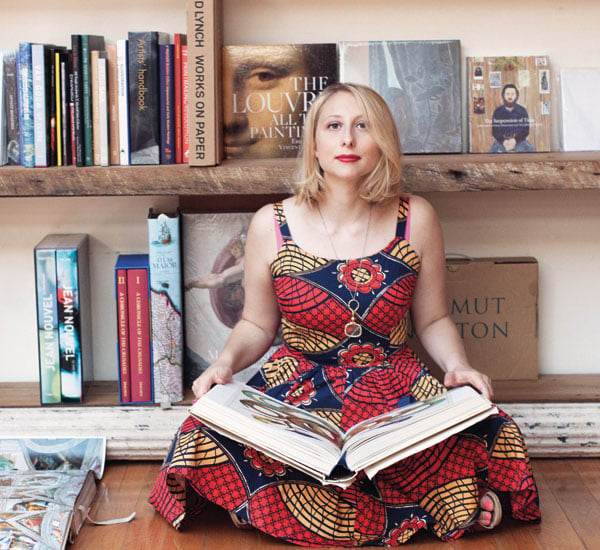 Do you have any nightly bedtime rituals?
My husband I are sort of on the Netflix train. We’ll scroll through and spend an hour talking about what I want to watch vs. what he wants to watch and then we’re like, oh, God, it’s so late, let’s just watch Survivor and go to sleep. Then I write in my diary and read for as long as possible before turning out the light.

Now I must hear more about the diary. What do you write in it?
The designer Tamara Shopsin makes five-year diaries. They’re these little fat, clothbound diaries, with five spaces on each page for the same date over five years. I’m on year three of my current diary right now, but I completed one before this. It’s AMAZING, because it means I can tell you exactly what I did on this day two years ago, three years ago, four years ago… My life has changed so much in the last few years, having a child and soon having two, and it’s really great having this record. It’s just a few sentences about what I did each day, which is just enough to jog my memory and remember what happened. 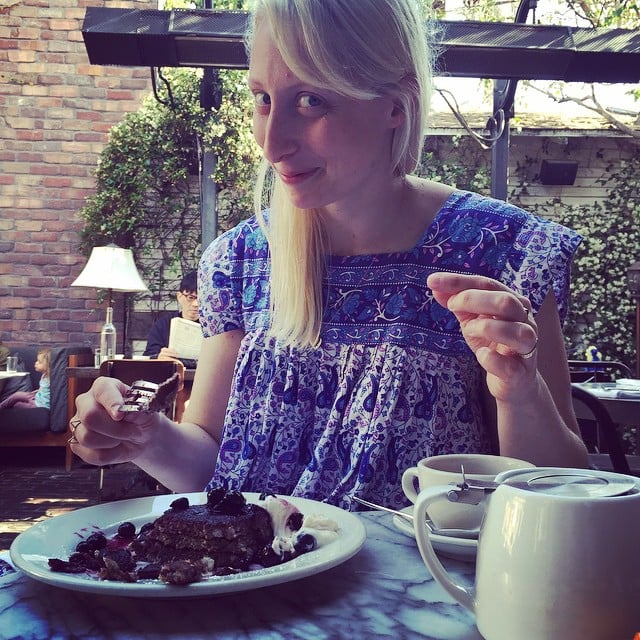 Do you have a signature scent?
For many years, I wore Clinique Calyx. It’s very citrusy and light, and it smells like high school. I’ll still spray myself with it sometimes, just for kicks. My husband and I have been together since I was 22 and it’s what I wore back when we started dating, so he’s happy when I break that out.

Now I wear Diptyque’s Olene, which feels like a grown-up version of Calyx. It’s floral and zippy but not in-your-face. 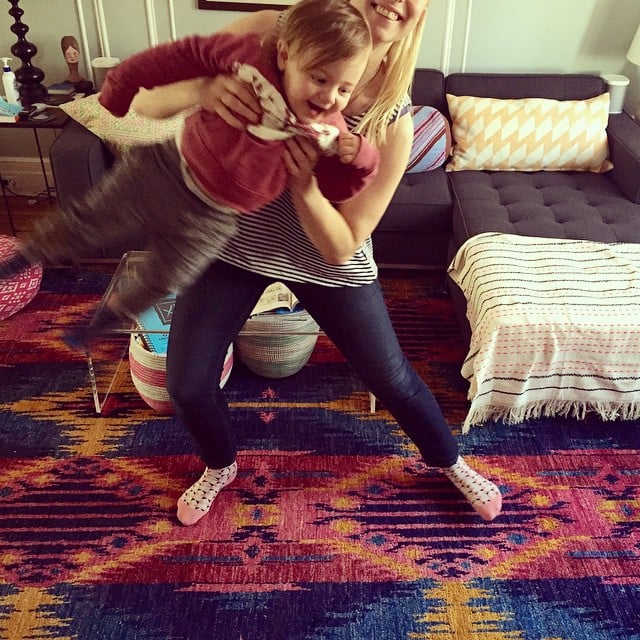 What are your feelings on the age-old question of bath vs. shower?
When my son (now two) was little, he and I would take baths together every night, and I loved it. Now that he’s big and likes to spread out and pretend to be a merman/whale/puffer fish, I have to stay out, but I miss it. He’s very into aquatics of all kinds, so he loves the bath. The new babe won’t be able to stop me from joining, though! HA! 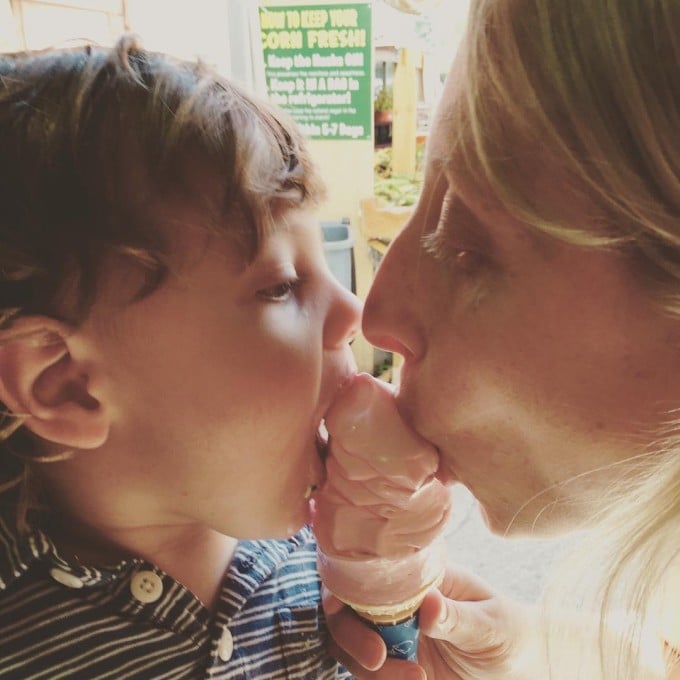 Have you been using any special products during your pregnancy?
Right now, I’m slathering my whole body with Weleda Stretch Mark Oil, because I don’t want to add to my stretch mark collection. But I don’t really care, because I am not a bikini individual. Nobody’s going to see them except for my husband and my children, and I know they love my body as it is. Plus, then you get to feel sort of like a tiger. 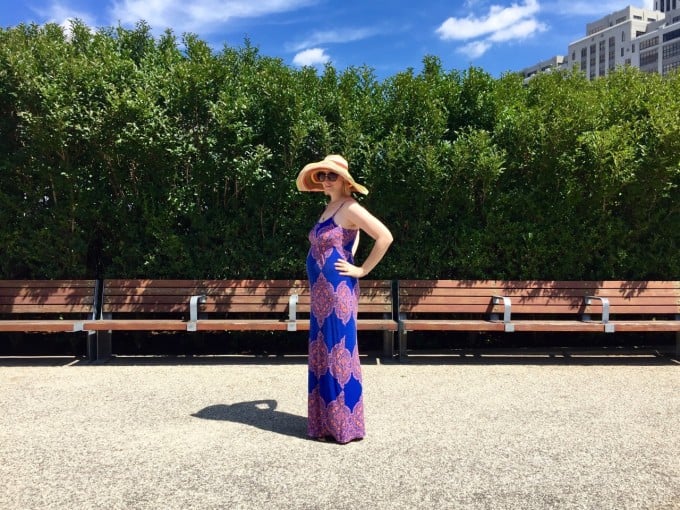 What’s the one thing you cannot live without while pregnant?
Chocolate, but that’s the case when I’m not pregnant, too. Ditto for fried chicken. And Shake Shack. Apologies, heart. 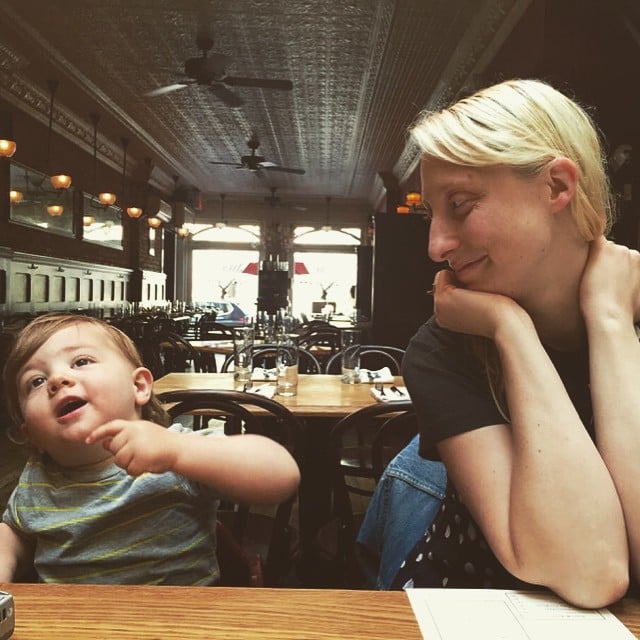 How will you talk to your sons about beauty as they grow older? What do you want them to know?
I grew up in New York City, which meant that I was exposed to different kinds of people on a daily basis — people of different ages, races, shapes, sizes, economic backgrounds… I had friends from all over, who were very different than I was. I want my kids to know the world is not made up of people who are exactly like them, that beauty comes in many forms.

I will often change words in books. For example, there’s that Dr. Seuss book, One Fish Two Fish Red Fish Blue Fish, where there’s a picture of a little girl brushing the hair of this funny creature, and it says, “All girls who like to brush and comb…” When I read it, I always change “girls” to “kids” because I don’t want my son to grow up to be a sexist moron. In our family, my husband is far better at household stuff than I am, and I have a job and earn money, and I think my children will understand from day one that it’s not really an option whether you’re a feminist or not. 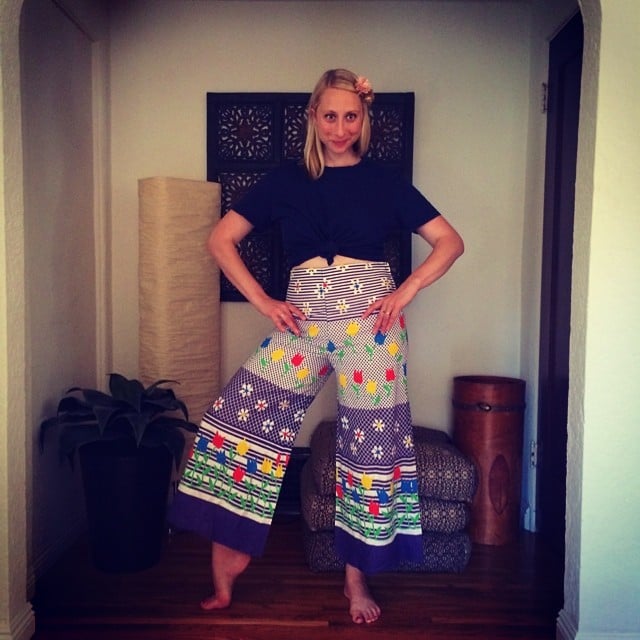 What is the most drastic thing you’ve ever done with your overall look?
I have had many regrettable haircuts and hair colors. In my youth, I dyed it red and pink and brown. I’m trying to become less blond at the moment, because it’s so much upkeep. I think eventually what I’ll do is cut it all off and start from scratch, which especially doesn’t sound fun when you’re pregnant. You have this Rosemary’s Baby moment, where you’re huge and have short hair and it looks cute, but then you have to grow it out. 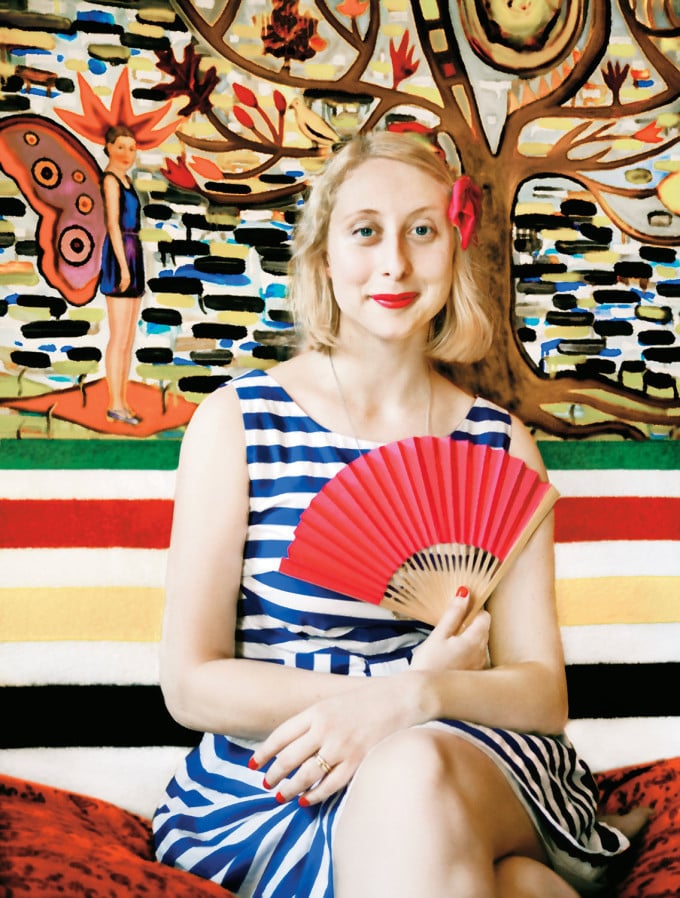 What advice would you give to your younger self?
I would tell her to travel more, and more adventurously. And not to be so worried about planning the future, because things usually work out in the end, more or less, and all that anxiety never did me any good. Also, I would tell her to learn how to put on makeup, so that I would now know how to do it, too, sort of like how Biff goes back to 1955 to give himself the Sports Almanac. 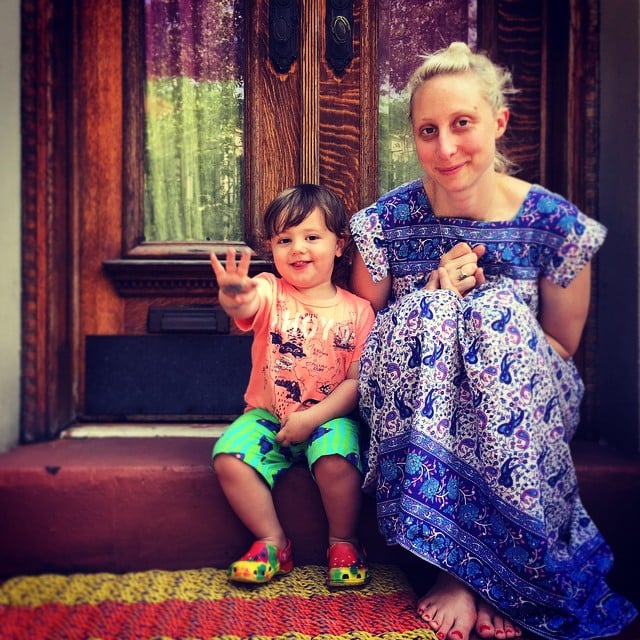 Thank you so much, Emma! We love you.