My phone call with Lena Dunham (!) 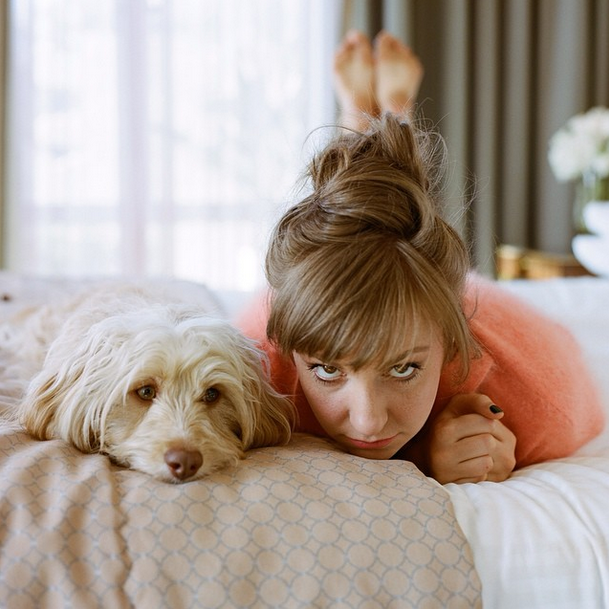 Yesterday, at 10:30am sharp, I dialed a fancy Manhattan hotel and asked to be connected to a publicist, who then connected me to…Lena Dunham! Dunham’s collection of personal essays, Not That Kind of Girl, came out today, and I was curious to talk to her about sex, books and how she’s changed over the years. Here’s what she said…

You talk a lot in your book about bad sex or weird guys you dated in college. Do you regret anything? Or do you think it was all part of becoming who you are?
I always try to be pretty anti-regret. I find regret to be the world’s most uncomfortable emotion. My mother is the Biggest Regretter. She actually named a body of work she did “The Music of Regret” because, as she said, “the music of regret is the music of my life.” My mother will talk about how she ordered the wrong thing at the restaurant for two days afterward, and how she wore the wrong shoes to top it off. So I went defiantly in the other direction. I mean, are there two minute chunks of my life I would make disappear? Yes, but writing is a way to take things that felt like they have no meaning and give them meaning. Writing takes a humiliating experience and gives it purpose.

You’re obviously an incredibly hard worker. (Allison Williams [who plays Marnie on Girls] told Vogue, “She writes constantly. Late at night, early in the morning, constantly.”) Do you feel like you’re becoming different from the characters you’ve portrayed so far? You’re in a happy serious relationship, have an amazing driven career…would you ever write about THAT girl?
The interesting thing is, that’s not who I was when I was younger. My teachers were constantly asking my parents, “Have you gotten her tested for ADD?” For me, it’s a real study in how you have to find your passion and everything else falls into place. I was the kid who was always pretending to be sick, always making excuses for not having my homework, so the fact that I have a fairly evolved work ethic is a shock to all of us. That’s something that comes when you’re connected to your actual purpose. With the show, once Hannah really locks in with what she’s supposed to be doing, I like to think that work won’t feel like work anymore, and some of her less savory habits will disappear. Right now she hasn’t quite found it, and I like to think that when she does she’ll be a more contributing member of society.

Do you ever think “I’ve told all my stories”? Or that you have to do something crazy to write about?
I used to have that feeling way more than I do now. It actually drove a lot of the things I did: Well, if I go to this alley late at night where this sommelier has asked me to meet him, then I’ll learn all these things about myself and I’ll have a story to tell… It was a big revelation to me that I didn’t have to do that. But it’s challenging when your business is writing about your own life—the next few projects I’m doing have nothing to do with me. There’s a kernel of emotional truth that I relate to in each one, but I’m excited about the idea of turning my eye onto something else. I think I’ll know when it’s time to return to myself.

Which books do you love? Are there books that have been meaningful at times in your life?
I have that feeling when I talk about books where I get paralyzed by all the books I love. My first and favorite book is Eloise, the story of a girl who lives with her nanny, dog and turtle at the Plaza. I’m working on a documentary about the writing of Eloise, and I’ve gotten all these amazing women to talk about how Eloise and how she’s affected their lives. As a kid I was obviously obsessed with Judy Blume, as we all were. Are You There, God? It’s Me, Margaret. Blubber. Deenie was the first time I’d heard masturbation talked about not in hateful whispers. I stole Lolita from my glamorous cool babysitter Libby in fourth grade. I didn’t really understand it at the time, but I’ve reread it several times; it’s a real favorite of mine. I’m totally obsessed with anything that involves tough women facing down a hard time, be it Little Women or A Little Princess. My favorite mystery page turner is Rebecca by Daphne du Maurier. I love the book Love Poems by Nikki Giovanni, the only person I ever wrote a fan letter to. It’s beautiful, you would love it—it’s all about being a daughter, a mother, a wife, all those versions of yourself.

Nora Ephron once talked about a game she played while waiting for restaurant tables where you think of five words that describe yourself. Which five words would you choose at this point in your life?
Woman, writer, radical, hungry, sleepy.

What’s some good advice you’ve gotten in your life? That you’d want to pass along to other women?
One that I really love was when I went to the music festival SXSW for the first time and I was having boy problems. At a party I was talking to this beautiful woman who I never met again, and I was telling her about my boy problems, which in hindsight was probably inappropriate. And she said, to paraphrase Maya Angelou, if someone tells you who they are, believe them. Basically the idea is that people tell us who they are every day in 1,000 ways, and we try not to hear them, but we have to hear them.

Describe your perfect day off.
My perfect day off involves sleeping til 11 and having an iced green tea waiting (somehow someone’s already walked the dog), reading the newspaper under the blanket until my hunger becomes unbearable, walking a very short distance to brunch, and then watching movies that are on my list all afternoon.

You’ve talked about your fascination/fear of death. What would you want written on your tombstone?
I know exactly. When my great aunt Doris died last December, she was almost 101. I got a beautiful small watercolor she had painted during her life, and it was of a tombstone. And the tombstone said, “She has done her best.”

That makes me want to cry!
Incredible, right? I think it was a joke to my aunt, but that’s what I would want on my tombstone: She has done her best. 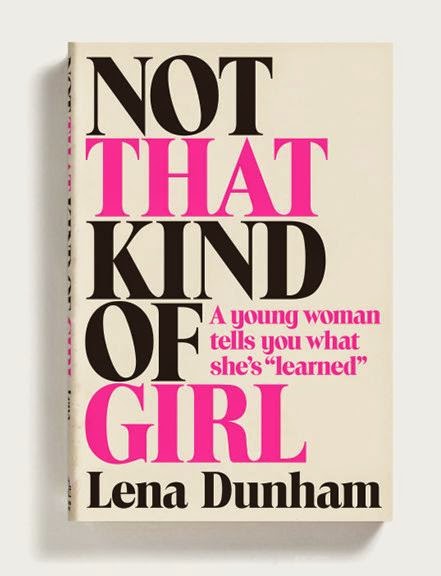 Thank you so much, Lena! Big congratulations on your book and all you do.

P.S. A phone call with B.J. Novak and an interview with the costume designer of Girls.

Tags: books
73 COMMENTS
WRITE A COMMENT
Design
most popular
01
My Sister’s Home Makeover
02
What Are Your Top Three Books?
03
The Ultimate TV Guide (If You’re Looking for Something Great)
04
Catherine Newman’s House Is a Joyful Jumble of Books, Games and Cats
05
Behind the Scenes: Making a Magazine Cover
May We Suggest…
By Joanna Goddard
Relationships
‘What It Feels Like to Have Autism’
December 1, 2020

95 COMMENTS
By Joanna Goddard
Design
What Grief Feels Like
January 27, 2021

150 COMMENTS
By Joanna Goddard
Design
The Darkly Funny Book I Can’t Stop Thinking About
May 11, 2021

Brilliant interview. We’ll all ask for that tombstone now. xx

Wow! What a great opportunity! Thank you for this! I can’t wait to read her book!

Love it. I’m going to buy her book asap. I loved her small promo videos for the book.

wow.. that was awesome.
i stopped watching girl last season.. it’s just didn’t appeal to me anymore.. but I still love Lena and most of what she represents.. this was a great read.. good questions :)

I also like when she talks about being so different from who she was as a child and states…
“That’s something that comes when you’re connected to your actual purpose.”

So true, and something I’ve been learning about a lot recently! Thanks for sharing this. Great questions. Great answers. I loved this.

Oh my actual God! I am green with envy. Lena is definitely one of my favourite women :)

Regarding gravestone’s, my Dad wants his to read “Under this sod lies another”.

What awesome words to hear :)

Ahh this is awesome! I love Lena and can’t wait to read her book!!

I just finished reading rebecca and loved it! Fun to see it on her top list!

Yay! Congrats to you. Now I have all of these books to add to my list :)

Reply
Lilac In May

Loved your interview, especially the last question. When my three children were young, I used to always say that my tombstone would read “The Laundry is Done!”

Hello Joanna ; great interview and I would like a little mouse to listen your conversation….Amazing and what a good boost to my dreams ; thank you ! Have a crazy day

Wow. Fantastic interview. Can’t wait to read her book. You should write one too!!!

Hi Joanna,
I’ve been a loyal follower for years but never commented. I want to thank you. Your blog has often offered me what feels like friendship on a cloudy day. Thanks for sharing all that you do, it all resonates so soundly. You are an unpretentious role model (the best kind!), and it’s been such a rewarding journey as a reader. I am so pleased for you and your well deserved success.
I think Caroline is great!

Congrats, Joanna! This is such an amazing interview – you just know which questions to ask! Thanks so much for that! x

I have a question for all of you! I decided to take an online course. It would be purely for me, not my CV so it has to be really interesting. At first I thought fashion (cause I am terrible at matching clothes:), but then I trarted to think that I should take something wider like writing or editoring or something about PR (where I work). So maybe you have some good suggestions that you or your friends tried that was really usefull? Thank you!!!

This is awesome! Every time I hear or read an interview with her, i like her even more! Her NPR interview on Fresh Air was great too. You should check it out.

I love that you two spoke. Thanks.

Can’t believe you got an interview with Lena Dunham! Her responses are always so well versed (comes with being a writer, I guess).

This is my favorite post on Cup of Jo ever (and I’ve loved so many of them!!!!). FANTASTIC INTERVIEW!!!!

Great post! Lena’s answers were really well thought-out, and I really enjoyed reading them. Thanks for sharing!

I kinda love that she described herself as “hungry” and “sleepy.”

Wow amazing! great questions. I LOVE LENA. AND YOU.

I LOVE THIS! So, so awesome.