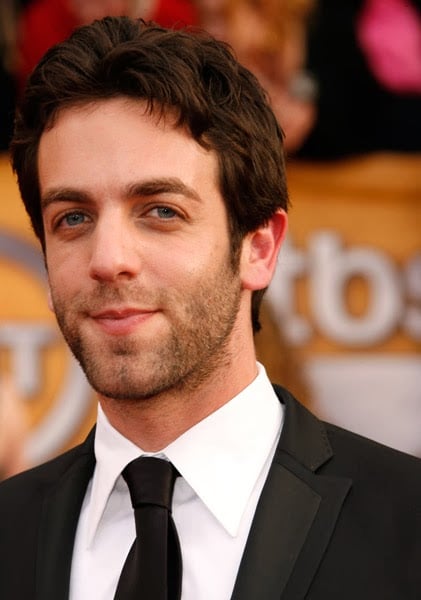 I’m so excited to tell you that this week, I was lucky enough to chat with this bearded fellow! Here’s how our conversation went down…

Like most people, I’ve been a huge fan of B.J. Novak since his days playing Ryan on “The Office.” And I vaguely assumed he was probably similar to Ryan. So, although I knew his new book of short stories, One More Thing, would be hilarious, I didn’t expect it to be so poignant and literary. He seems to understand and even love people around him in a very insightful way. I was curious to learn more about him and was thrilled to be able to arrange a phone interview.

So, here’s what we talked about on Wednesday morning…

I have to say, I’ve seen you around New York, and you’re so nice when people approach you.
It feels surreal. I hope I never get fully used to it. It’s so special and odd when people know your name. It’s like you go to high school with everyone in the country. Hey, there’s that guy who did that thing…

Can you tell when people recognize you?
I can absolutely tell. I wish I were there in person with you because I could show you the eye movement when it happens. It’s a different focal distance in their eyes after they look away from me. You know, you look at every stranger that walks by, but after you look away, if you’re thinking about the person you just saw, you’re focusing on a much shorter frame of distance, whereas if you don’t know that person, you look off into the far distance.

Does the book feel personal to you?
Yeah! Unbelievably personal. And “personal” was the last thing I ever thought this book would be. I assumed it would be opposite of a memoir—pure entertainment, nothing about myself, nothing about anyone I knew. But because there were no rules to writing this book—not the length of a story, or how funny a story should be—everything was my own style and taste, every detail of the story was my own emotional life, my own philosophy. I feel extremely well known by anyone who has read the book.

While writing the book, did you picture a reader?
When I was working on the book, I read parts out loud to audiences at Upright Citizens Brigade in L.A., so I pictured those audiences. And sometimes I’d read it to friends that came over—different stories for different friends—so I pictured reading it to them, too. I always pictured it being read out loud.

I was struck by how real the dialogue felt. Where did you learn that? While writing for “The Office”?
My dad is a ghost writer, so he writes books in other people’s voices—exactly as Magic Johnson or Tim Russert or Lee Iacocca would write it. So I subtly picked that up from him—how to write like someone else would write, how to speak like someone else would speak. So, while writing for “The Office,” I could figure out the exact difference between how Dwight would say something crazy and Creed would say something crazy. People often ask how much of “The Office” is improvised. The answer is about 10%—less than people would think. We wrote it so that it would sound improvised. We wrote in “um”s and pauses to make the dialogue feel natural.

I’m claustrophobic and hate elevators. Do you have any irrational fears?
Roller coasters. I won’t go on them. I’ll go on babyish ones at Disneyland. But any ride I get on where I’m out of control, I’m scared they’re going to trick me and there’s going to be a drop. My friends wanted to go on the Cars ride at Disneyland. They kept saying, “There’s no drop, there’s no drop,” so to outsmart them, I said, “Hey, should I bring my camera, or is someone going to take our picture on the ride?” And they said we’d get our photo taken. And I was like, “I knew it!!! When you take a picture, it’s at the drop!!!!” I’m actually sketching out a movie right now that involves a horror theme park.

What’s your favorite place in the world?
I like a beach that is more than a mile or two long. That’s the other thing I’m angrily trying to bust people on: Whenever I’m going to a hotel advertised on a beach, I say, is it on a long beach or a cove? They say it’s a long beach, but it’s always a rocky cove. I don’t give a shit about a rocky cove! I want the long walk on the beach. As romantic as it sounds, I always want to do it alone. The end of Shawshank Redemption, that’s my perfect place in the world. That’s where I came up with my book. I went on a vacation right after “The Office” ended to Tulum, Mexico. They have a very long beach there. I went on a walk, and by the time I came back, I was like, I’m going to write a book, here’s what it’s going to be called, and I’m going to read it out loud.

What are some books you really love? Your top five?
I just started Birds of America, which is blowing me away. I can’t believe I haven’t read Lorrie Moore before. For comedy writing, I really love Simon Rich. My #1 top book of all time is Lolita. Sabbath’s Theater by Philip Roth. I loved Gone Girl. I thought it was incredible that a book that was so much of a pulpy heart-pounding thriller had so many intimate sophisticated observations about human nature. I kind of tease John Grisham in my book, but The Firm was one of my favorite books, one of the most exciting books I’ve ever read.

What’s something about you that might surprise people? Actually, while reading your book, I was surprised by how nice you seemed. Not that I didn’t think you were nice, but…
Well, in “The Office,” I played this character who was a subtly recognizable kind of jerk. Secondarily, I have a face that in resting position looks angry. These two things combined have made people think I’m cold or unhappy or unfriendly. I certainly have those sides but usually I’m just thinking about things, often in a contemplative, insecure or even daydreamy way. The book is what’s actually been going on in my head while I look like I’m meanly staring straight ahead.

Do you identify more as a writer or an actor?
A writer, completely. My father’s a writer, and writing is always what I did in school. That’s what I put on my customs form. But I do really enjoy doing the live readings of my stories. I aspire to be like David Sedaris, and when I’m on stage, embodying the stories, doing gestures and voices, I think, Oh, you’re really something of an actor, aren’t you, buddy?

What’s your guilty pleasure?
I love being on my phone. People think it’s the sin of our time to be on your phone too much. But I think on my deathbed, I will wish I spent more time on my phone.

Thank you so much, B.J.! It was such a pleasure to talk.

P.S. An interview with an animal photographer and the costume designer of Girls.

Tags: books
64 COMMENTS
WRITE A COMMENT
Array ( )
Design
most popular
01
My Sister’s Home Makeover
02
What Are Your Top Three Books?
03
The Ultimate TV Guide (If You’re Looking for Something Great)
04
Catherine Newman’s House Is a Joyful Jumble of Books, Games and Cats
05
Behind the Scenes: Making a Magazine Cover
May We Suggest…
By Joanna Goddard
Design
Five Best Graphic Novels
July 7, 2020

307 COMMENTS
By Joanna Goddard
Relationships
‘What It Feels Like to Have Autism’
December 1, 2020

95 COMMENTS
By Joanna Goddard
Design
The Darkly Funny Book I Can’t Stop Thinking About
May 11, 2021

Awesome phonecall! Wish I had the nerve to call celebrities :-)

Hey Joanna-You are usually a flawless writer, but I found this:
He seems to understand and even love people around him in a very insightful, really way.

Did you mean real way?

Stroq is amazing by the way right!?!?

This guy is so cool! I love this interview.

That was a great interview and a great person to interview! He’s so talented it simply makes me green… and makes me want to stalk him.

Awesome! A small typo you might want to correct in the intro -” really”

Awesome! A small typo you might want to correct in the intro -” really”

this is such a great interview joanna! i love that it was over the phone and the interview wraps up with him sharing that he loves talking on the phone.
just ordered two books from my local bookstore from his suggestion list.
it’s as easy as using amazon…and better for everyone :)

Love the interview!! I can’t wait to read the book!!

I keep hearing wonderful things about the book. I just put it on my reading list. Or maybe the audiobook would be better….

I’m pretty sure my ‘angry resting face’ has cost me way more opportunities and friendships than I even realize. It’s the worst when I’m reading or concentrating! I’m trying to work on frequently making my face more open and neutral/pleasant looking in the hopes that my subconscious will also resort to that expression, because it isn’t nice scaring people off! Haha :)

I so admire your balls! :) I can’t imagine speaking – let alone setting up a call – with a celebrity. You’s all growns up! :) Awesome interview – I definitely want to read his book now. And the dad as a ghostwriter thing is so interesting!

What a great interview! I love your questions and his answers are so thoughtful. I also had no idea he’d written a book, but now I think I’ll have to pick it up!

Wonderful interview
I look forward to reading his book.
He has an Adam Sandler/Seth Myers kind of dude smile.

Yay! So glad you featured this guy!

I feel like he’s talking about me in the beginning of your interview! I’m such a doofus every time I see him. Great interview, so jelly!

Way to go, Joanna! I had no idea who this fellow was until I read your interview… you asked good questions. He seems like a nice guy.

Thank you for this Joanna! He really seems wonderful. I love this part: “…made people think I’m cold or unhappy or unfriendly. I certainly have those sides but usually I’m just thinking about things, often in a contemplative, insecure or even daydreamy way…”

Wow, that’s fascinating about his dad the ghostwriter. I’ll definitely be reading this one! B.J. you need to go to Fort Myers Beach for a long walk! :)

I do like intimate, honest interviews, even if they are only 15 mins :) Kind of bummed he liked Gone Girl, I could not finish that damn book. I want to ask more questions on why he like it. Is it really a possibility, him and Mindy – love her!! Did u read her book? Great beach read.

Love this interview! Great questions and great answers! The David Sedaris comment and the deathbed/phone thing really made me want BJ as my new best friend. I am looking up his book tour right now so that we can meet and make that happen.

Um. This is amazing. Phone interviews for jobs are nerve-racking enough, but a phone call with B.J. Novak? That’s crazy!

This is a great interview!! Thank you so much for sharing it with us! I loved him on the Office and can’t wait to read his book (Mindy Kaling’s is on my list, too!!)

Wow, the fact that he loves Sabbath’s Theater earns much respect from me. That book is gritty, emotional, and brilliant.