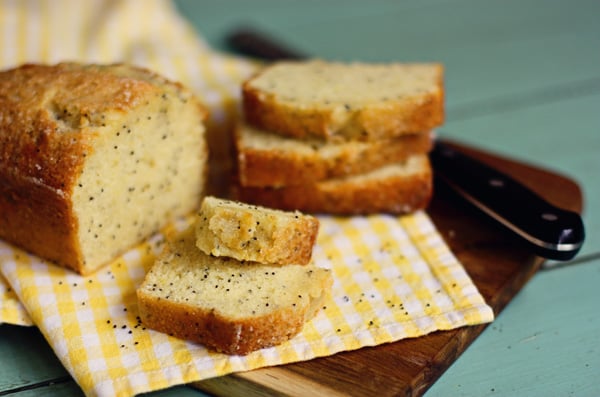 The first official day of fall is September 22nd—less than three weeks away. Aren’t you looking forward to cable-knit sweaters and orange leaves and cold noses? To ring in the season, Brenda of A Farmgirl’s Dabbles is sharing her recipe for the best almond poppy seed bread, all warm from the oven… 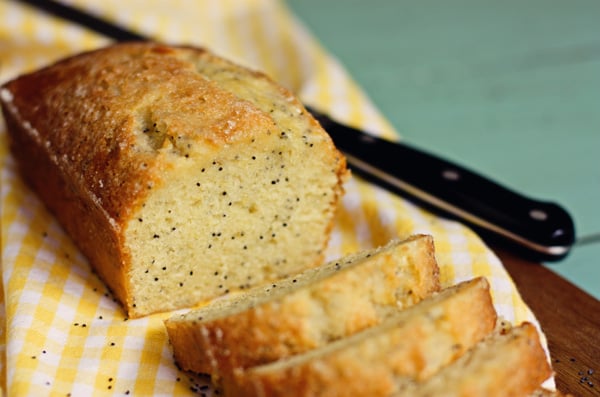 Our daughters have a thing for almond bread and a thing for lemon poppy seed bread. All moist and thick-crumbed and incredibly flavorful, these breads are always at the top of their lists. But the sad thing is, I’ve never had reliable recipes for them in my own recipe box. So I set out to change that and combine the goodness of both almond and lemon into one great no-fail recipe.

These little loaves of almond bread are the best you’ll ever find, guaranteed. Perfectly moist, they’re flavored with the comfort of almond and the brightness of lemon. My favorite part, though, is the lemony sugar glaze that soaks into the bread, giving it extra moistness and a sweet lemon tang. Once the glaze cools and sets, it creates a wonderful thin crust over the top of the bread, giving the top of each slice a few bites of crunchy texture—if I could get away with only eating the top half of the entire loaf, I surely would!

In the bowl of a stand mixer, combine the flour, sugar, salt, baking powder and poppy seeds. Stir on low, until just combined.

In a separate medium bowl, combine the rest of the ingredients—milk, vegetable oil, eggs, vanilla, almond extract and lemon zest.

Slowly add the wet ingredients to the dry. With mixer on low speed, beat until incorporated. Then, raise the mixer speed to medium and beat for one more minute.

Pour batter into prepared loaf pans and bake for 45 to 50 minutes, or until toothpick comes out clean.

While the bread is baking, prepare the glaze. Combine all glaze ingredients and whisk until incorporated. When the baked loaves are removed from the oven, immediately brush the glaze over the warm bread tops. It will seem like a lot of glaze, but it will soak in and make the bread ultra-moist and flavorful, with a bit of a sugary crust once cooled.

Cool loaves about 20 minutes. Then run a knife around the edges of the pans before removing bread from pans. 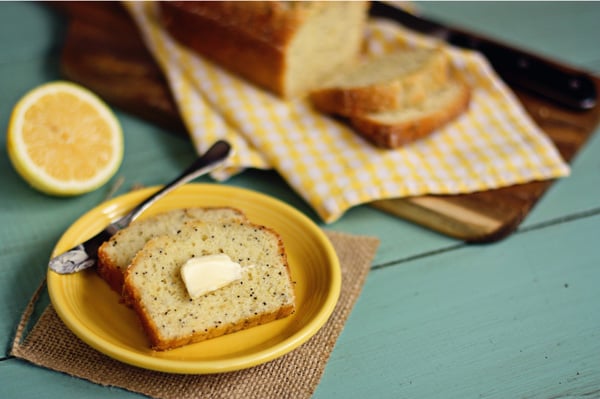 (Photos and recipe by Brenda Score of A Farmgirl’s Dabbles. Thanks to Shoko for helping with this series.)

what kind of sugar should we use for the glaze? powder sugar? Thanks!

This is my new favorite recipe! I made it for my mom’s group and they loved it. The glaze is so yummy! Thanks for posting this. :)

Those who were wondering about using a regular-sized loaf pan- I used a 9 x 5.5 pan and baked at 330 degrees for 1 hour and 10 minutes.

I am trying out this recipe right now! I have been meaning to bake this bread for the past few months, but I am just getting around to it. I tasted the batter, and it is AMAZING! Can’t wait for it to get out of the oven!

I would love try the recipe :-)
this recipe is also nice check it out!
http://cakesandmuffinsrecipes.blogspot.com/2013/09/poppy-seed-lemon-cake.html

I love lemon poppyseed bread, and this looks so moist and incredible!

Just tried baking this! The results were fantastic. Thanks for sharing this recipe, its definitely a keeper 😊

This looks like the perfect lemon pound cake! I pinned it and hope to make it this weekend!

Thanks for sharing.
I will try it if I have times.

I am going to try this.. however, I have to make it Gluten Free. I love Lemons… :O)

I would never have know where to start to make a loaf of bread. Poppy seed I can imagine in bread but lemon? Sounds reall good.

Definitely bookmarking this one — It looks fantastic! Thanks for sharing!

Love, love, love Fall cooking. I have to try this lemon poppy seed bread. Thank you for sharing the recipe!

Is there something I should change about the recipe or cook time if I only have larger (5″ x10″) loaf pans?

This looks so incredible! I’ll have to try it! I’m currently working on a post of pumpkin recipes! Should be up soon :)

Mm, this looks and sounds delicious!

yumm.
it is hard to find that extracts but i’ll try this looks so yummy. love everything with lemon!

Yum. This looks amazing. It’s funny, but here in Winnipeg, September has really marked a shift in the weather (toward fall). So I’m totally ready to fill my kitchen with the smells of baking.

This looks easy enough for me to bake.

A long time favorite! Sweet-sour flavor of the lemon and crunchy pops of poppy seeds. YUM!

This looks delicious! I definitely need to give this a go :)

The Girl In The Tartan Scarf

Yum!
And did the Motherhood Monday Living in Italy post disappear? It showed up on my feed but I can’t find it here??