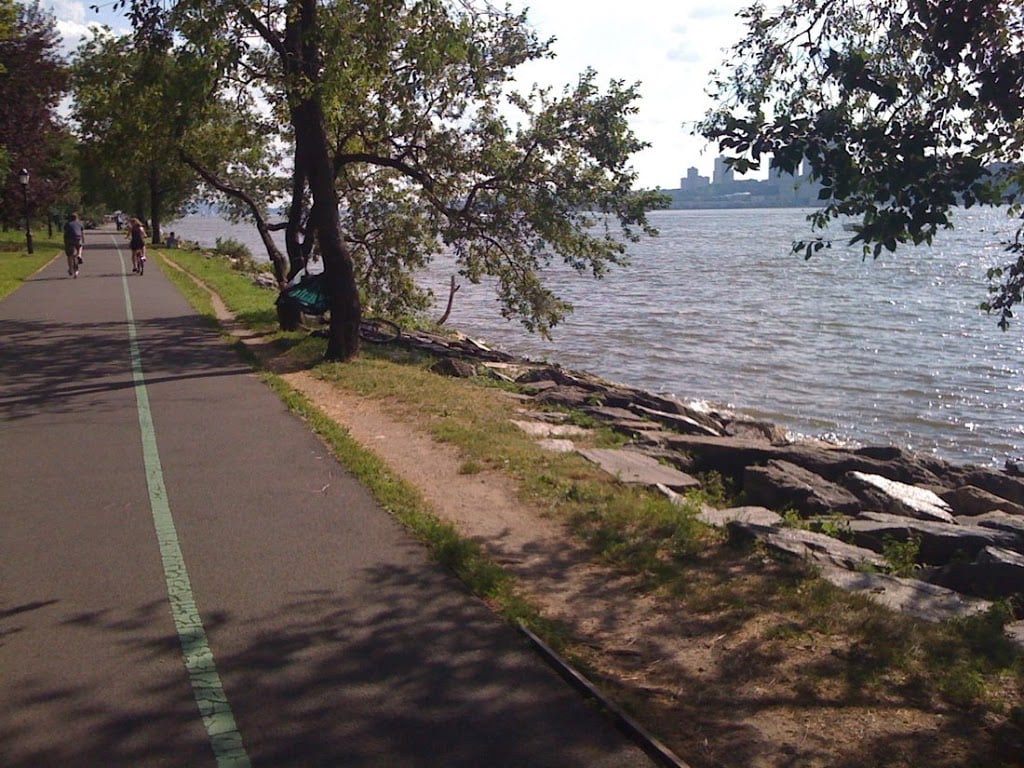 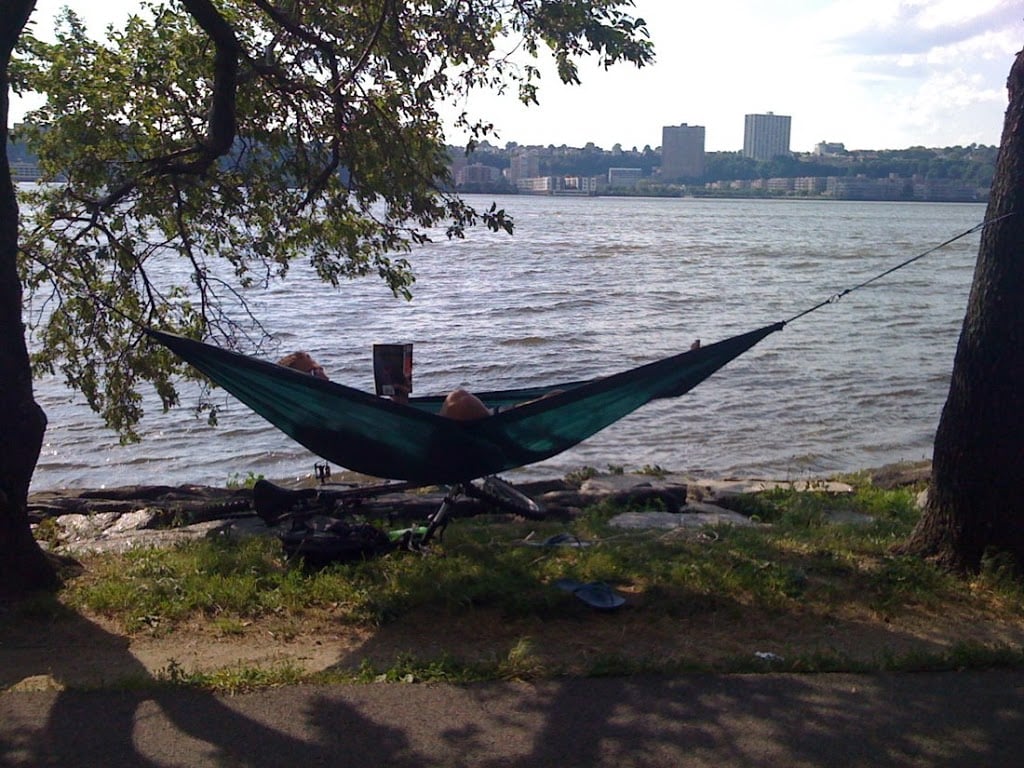 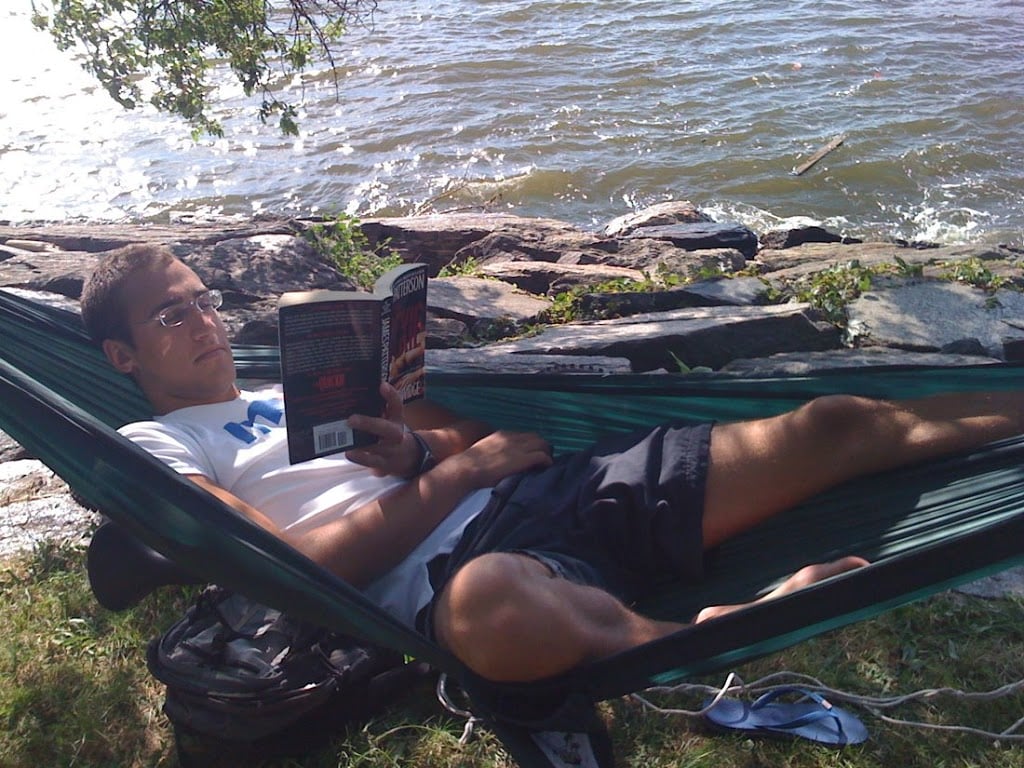 Alex and I were riding bikes around town, when we passed this guy Philippe relaxing in a hammock. Intrigued, we pedaled over and asked him where he found it. “Eastern Mountain Sports for $20,” he said and explained that he simply ties it to two trees anywhere around the city. “I’ve been called a lazy bum, but I love it.” What a genius idea!

Tags: bikes, genius
79 COMMENTS
WRITE A COMMENT
Design
most popular
01
My Sister’s Home Makeover
02
What Are Your Top Three Books?
03
The Ultimate TV Guide (If You’re Looking for Something Great)
04
Catherine Newman’s House Is a Joyful Jumble of Books, Games and Cats
05
Behind the Scenes: Making a Magazine Cover
May We Suggest…
By Joanna Goddard
Design
Have a Delicious Weekend.
March 20, 2020

I saw a guy awhile back with a hammock like this strung up on the beach. I love the idea! It would make reading outdoors so comfortable!

What an adorable young man. I could just squeeze his precious cheeks! Suzy Q, you must be VERY proud of your son. God bless.
-Whatagal

My cool son will never stop to amaze me! I guess he wanted to extend his vacation by turning NYC into his own little back yard.
Way to go Philippe, carpe diem!
Merci Joanna for the nice pictures and I hope it inspires people to do the same thing!
Suzy Q.

Thanks for the post Joanna. This was actually the hammock I have:

The one you linked to unfortunately doesn’t include the necessary ropes to hang it.

when we landscaped out back yard – no good, older trees like the last one – i had a structure built for a hammock. people stop by to see and comment on it. it screams summer is here!

All he needs is a thermos of tea.

I’m a firm believer in lounging in hammocks! one of the true pleasures of life!

Great idea, the hammock, but uhm, Philippe, what a hottie :)!!! Love your blog, Rita (from Germany)

sara, he said they do ask you to take them down in central park, but i think the hudson river is ok! xo

I hate to be the burster of bubbles, but if someone from the NYC Department of Parks and Recreation had seen him, I’m pretty sure they’d make him take it down. I’ve seen them do it before and I actually think it’s against their rules. Bummer, I know.

Love this…off to find one…

ahhhh OH MY! i was just telling justin that we need to carry around hammocks everywhere we go…and here you have it!

What a great idea! love it!

What a sweet idea!

This guy is my new hero. I have been craving some QHT (quality hammock time).

That’s pretty fantastic! We have a hammock in our backyard and I love.love it — I can just imagine how wonderful it would be to lie about in Central Park, or next to the river like that.

We use these same hammocks when we go camping! Sleeping in the woods by the campfire in one is fabulous!

I think your pictures did a MUCH better picture of selling the product and relaxation than what EMS had on their website….which was super cheesy. So I went and bought one. Thank you for the morning inspiration and impulse buy.

how awesome! i absolutely love lounging around in a hammock!

Odd, but kind of genius.

that rocks beyond all belief! i love it.

Where is this. I live next door to Astoria Park and we do this! Love it! Cannot believe they do that in Manhattan too=)
Come visit Astoria on your bike, its pretty!