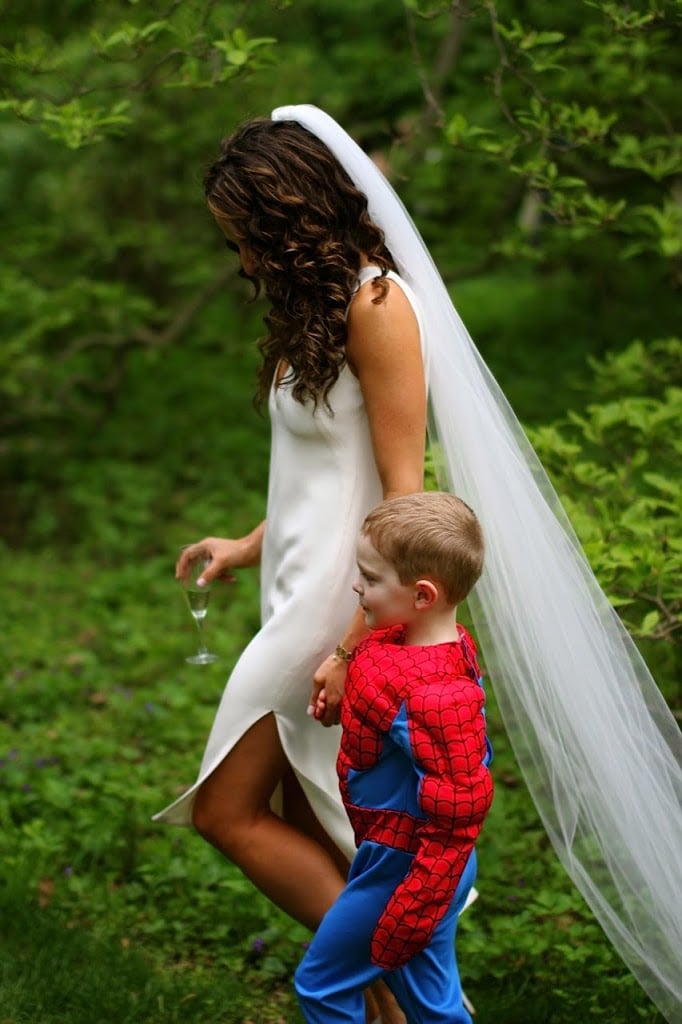 My friend Claire got married a couple weeks ago, and her nephew Lucus, the ring bearer, dressed up as Spiderman.

“Lucas is OBSESSED with costumes, so when we asked him to be the ring bearer we told him he could wear whatever costume he wanted. He was initially going to wear his Spiderman costume underneath what he calls his “work clothes” (slacks and a tie), but changed his mind at the last minute and went full Spiderman, and I was so glad he did. He wore it the whole time! And loved it. It also set a nice tone for the ceremony since he was the first one to walk out in the processional.”

How sweet is that? Also: “One of the cutest things is that he calls me ‘Uncle Claire,’ because when we met he was two and knew that I came as part of the package with his Uncle Chris.”

They gave him a Spiderman watch as a thank-you gift.

What little moments did you love from your wedding? My brother spontaneously gave his entire speech in a New Zealand accent, which still makes me laugh five years later.

Who wouldn’t want to walk down the isle with Spiderman!Happy Nesting.

I thought I had THE MOST BEAUTIFUL flowergirl and THE MOST HANDSOME JUNIOR USHER imaginable.
But I think you just took the crown.

Love this! And your friend looked so beautiful!!!!

Two hilarious moments all because it started to rain on the way to the wedding, which was supposed to be outside. Everything we’d rehearsed was delayed 10 minutes as they scrambled everything into the reception tent. #1, they put my parents, bridesmaids and me in the manager’s office to wait, and of course, I had to pee. On my way back, I brushed up against the copier and got toner on the train. No biggie – I just grabbed the White-Out off the manager’s desk and covered it up – much to my mother’s horror. No one ever noticed. #2 When it was time for my 3 year old nephew, the ringbearer, to walk a now different route down the aisle (now it had a turn in it), he spotted Uncle Ben over the guests’ heads and bolted down the right side shouting “Uncle Ben!” Not everyone could see him until he was upfront, but everyone could hear him and it was a nice way to get things started.

My brother was six when I got married. I asked him to be the ring bearer, and his eyes became enormous and he said, “YOU MEAN LIKE FRODO?!” He had just seen the Lord of the Rings. Our wedding was not themed, but my mom made him a little hobbit costume to wear, which he LOVED. He was very concerned that he didn’t have prosthetic toe hair! Still makes me laugh almost ten years later.

This might be weird, but are there any other pictures of her wedding floating around? From the tiny glimpse of her, I think I LOVE the way she’s styled, but I want to see more!

what a cute story! i’m only a teenager, but i want my wedding to be something fun and memorable.. not the boring ‘ole traditional stuff!
thanks for sharing!
xox
chloe
http://popcosmo.com

The unexpected/unplanned moments are what make weddings special. We had a flower girl who refused to smile, an impromptu game of rugby with all the male guests and kids catching tadpoles from the pond in teacups! All brilliant moments I won’t forget. The important bit is the ‘I do’ stuff, the rest is just garnish (and so not worth getting hung up on)!

We had a riot! Best day ever.

This is the nicest idea ever, I love how amazing Claire looks but how chilled out she was to have Spiderman involved! I hope I can be that chilled if I get married! Little London Girl x
http://www.littlelondongirl.co.uk

Gorgeous post! I’m not married (yet) – hurry up and propose, D! But we went to a beautiful wedding this weekend. Our friends got married in north London, then we all travelled down to the reception space (in south London) in two red London Buses. A fantastic day!

On my wedding day I got to dance with my father for the first time in my life…and WOW! He was such a good dancer!! Who Knew?!!…I certainly didn’t! And it was the sweetest surprise. Made me cry all over my dress during the dance. ♥

So adorable! My favorite moment was surprising my husband with a chalkboard sign that said “uncle Nate, here comes your girl” that our nephew (our ring bearer) carried down the aisle. He also had a surprise note in his pocket to give to Nate from me. ;) The funny part was when my niece – a feisty red headed two year old wouldn’t come down the aisle (flower girl) pretty much everyone there was cheering her on and my husband was at the end of the aisle trying to bribe her with a tootsie role. ;) She got up there eventually. Best memories are the “imperfect” ones.

So adorable! My favorite moment was surprising my husband with a chalkboard sign that said “uncle Nate, here comes your girl” that our nephew (our ring bearer) carried down the aisle. He also had a surprise note in his pocket to give to Nate from me. ;) The funny part was when my niece – a feisty red headed two year old wouldn’t come down the aisle (flower girl) pretty much everyone there was cheering her on and my husband was at the end of the aisle trying to bribe her with a tootsie role. ;) She got up there eventually. Best memories are the “imperfect” ones.

That is too cute. Some of my favourite parts were my mum’s reading during the ceremony – Dr Seuss’s ‘We’re all a little weird’ – and my parents’ dog, who was left to wander free, and as I walked up the aisle with my parents she stopped us in our tracks, demanding some love. Definitely broke the ice! haha.

My favorite part of the wedding was when it came time for me to say “I do,” my 5 year old stepdaughter (also the flower girl) literally started jumping up and down with excitement. It felt so special to be marrying my husband, but I also felt beyond lucky to be accepted by another huge part of my heart, my stepdaughter.

That is too cute! I love the “Uncle Claire” bit! Only a kid could come up with that sort of gold. I’m not married yet, but if there are kids involved (we have a shortage of kids around here unfortunately) I’m totally doing the costume thing! Too cute!

Fave thing about my wedding…I have to think hard because A Lot went wrong…I suppose how during our first dance to Sade “this is no ordinary love” he began to sexy dance on me and told me to drop it to the floor…as if I could,it was hilarious because I could barley move I was 6 months pregnant. He made me laugh that’s all that matters.

OMG, how awesome. Both on the part of the couple and the kid.

The American-Made Guide to Life

Stop it! This is AMAZINGLY cute! I seriously can not handle this.

I LOVE that dress! So beautiful! So, two of my brides maids were my younger twin sisters. I had my back to them during most of the ceremony, and at one point, they were getting a little weepy, and they saw me do something with my hand that made them think I was crying. Until recently (at our youngest sisters wedding) they had never seen me cry. So the thought of this made them both start sobbing like crazy. In an effort to muffle her sobs, while, I guess, gasping for air, one of them lets out this crazy honk sound! It was so loud, we all just doubled over with laughter! I can’t even describe the shade of red she turned.

My husband has two little girls from his first marriage (and unfortunately, his first wife unexpectedly passed away when their daughters were 3 months and 2 years old). We have since then met and got married when the girls were 3 and 5 years old. My husband and I knew we wanted to have a 3rd child (my first) and we wanted to close the age gap w/ our/his youngest child right away. We told the girls that after we got married, we would have a baby together (meaning they would have a new baby brother or sister down the road). The two of them took that notion literally and at the brunch the next day after the wedding were running around asking where the “baby” was. Well, in their minds we were “married” – so where was their new sibling! Low and behold I was actually pregnant at our wedding but confirmed it on our honeymoon! So, they were indeed on to something w/ their innocent question! We tell the girls and our son for that matter that they are super lucky (as they have 2 moms that love them – an angel mom, and me). I will never forget the girls running around the brunch searching for their new sibling.