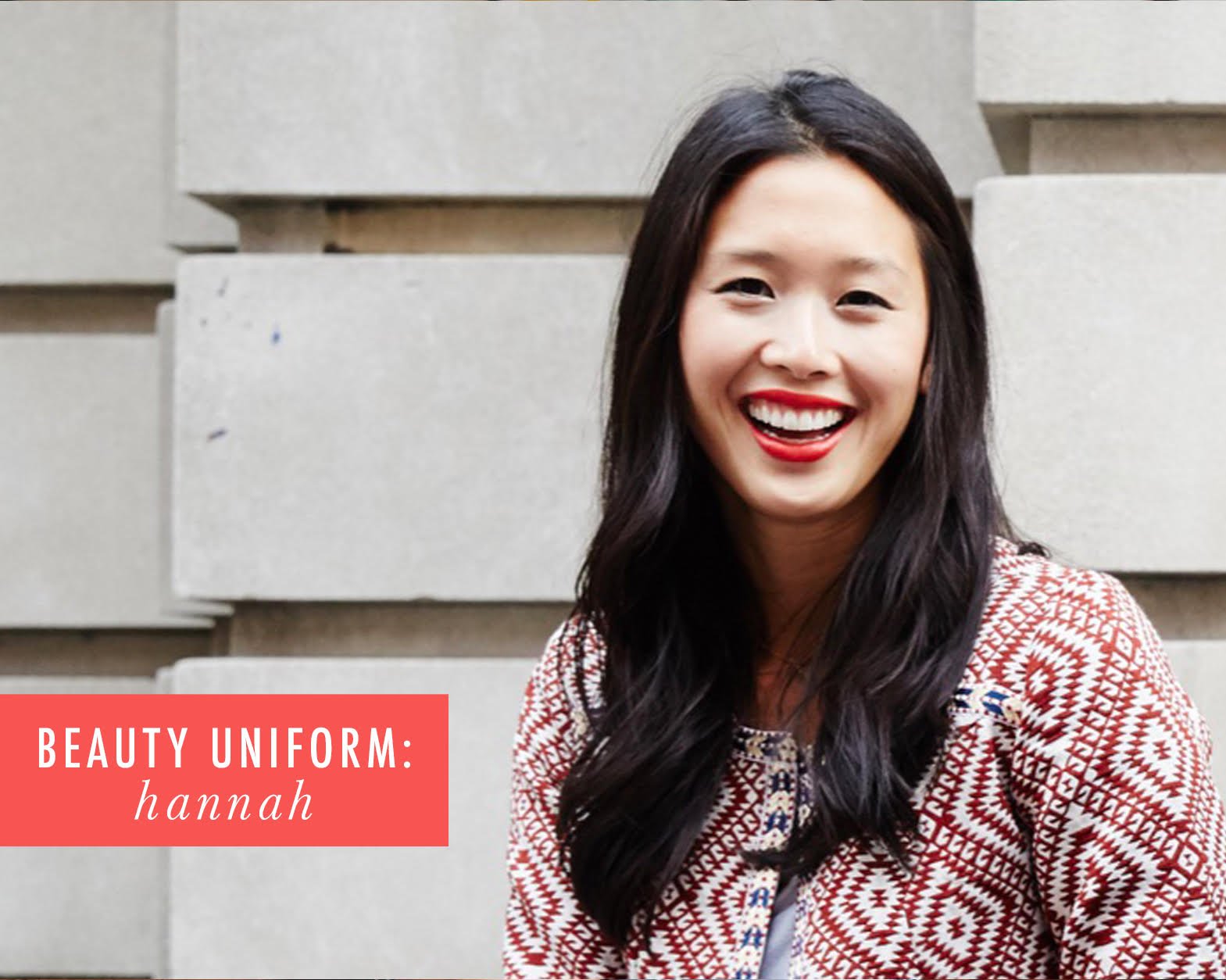 Seven years ago, Hannah Cheng decided to leave her finance career to open a dumpling restaurant in New York City with her sister, Marian. “We named it Mimi Cheng’s after our mom,” she says. “She thought it was a really bad name and that we should have named it ‘Excellent Dumpling House.’ Here, the restaurateur tells us about her career leap, favorite blush and guilty bedtime habit… 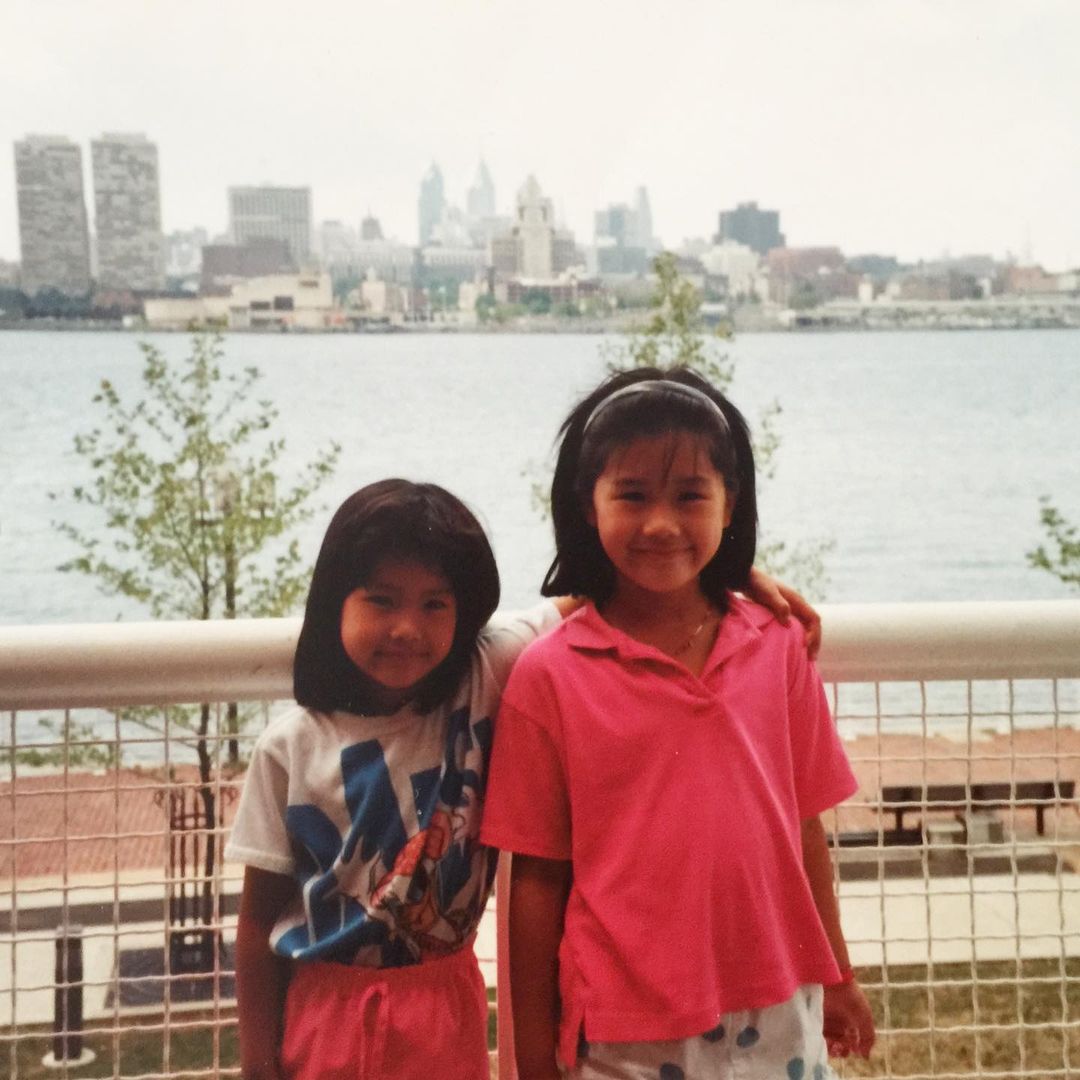 When did you start thinking about opening a restaurant?
My mom has made Taiwanese dumplings for us ever since we were little. Even when we were in college, she would drive down coolers of dumplings and her secret sauce. Our roommates were always so excited. When I was living in an apartment in my twenties, and sick of midtown food options, I’d bring her dumplings into work for lunch. And people would always ask me to bring extra. Then my parents moved from the east coast to the west coast. Our dumpling supply ran out. So, my sister and I, with no restaurant experience, decided it would be a good idea to sign a 10-year restaurant lease.

Did you quit your finance job right away?
No, I worked on the trading floor for two more years. I did both.

Any disastrous moments as you were starting out?
Too many to count. My friends tell me I should write a book one day, but it’s still too soon! 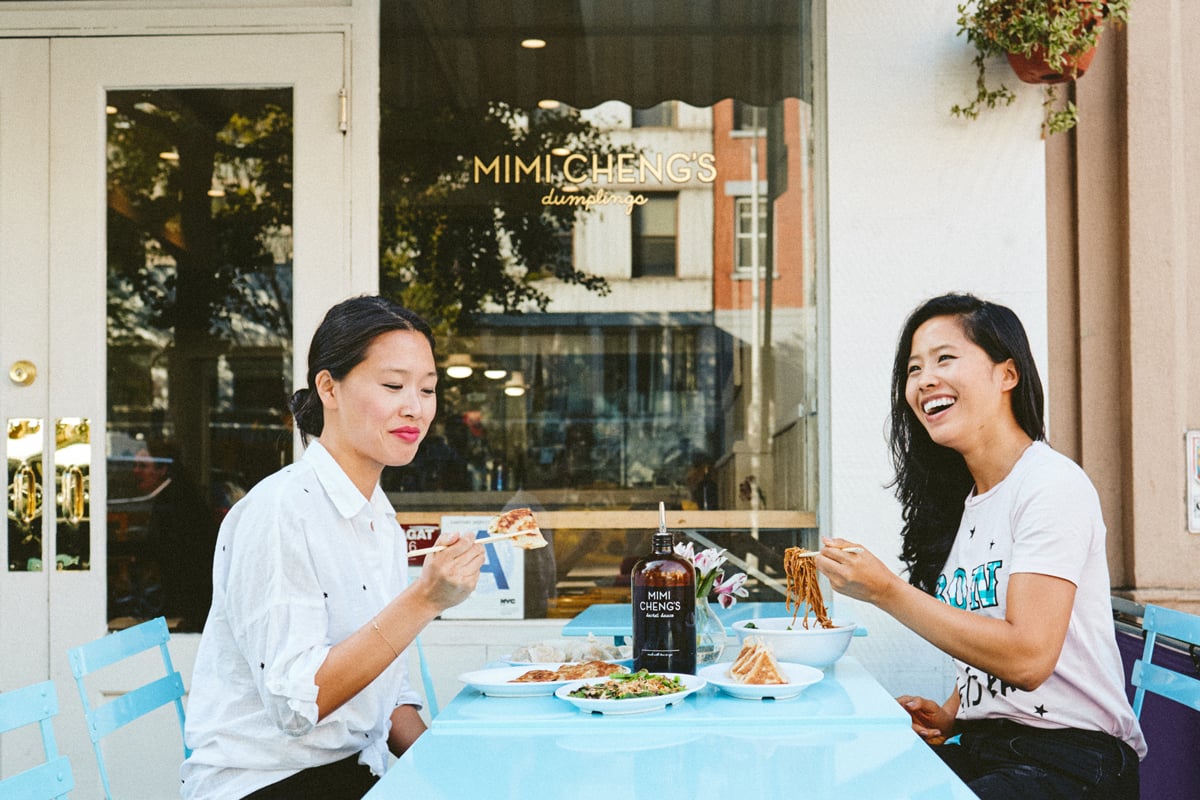 Tell us about opening day.
We had been written up in the New York Times the day before. So, the morning we opened, there were 500 people lined up outside the doors. We did not have enough food prepared; we had to keep closing during the day to catch up. I went home and cried myself to sleep. Owning a restaurant was nothing like I had imagined. All I could envision was the next 10 years, prepping vegetables until 3 a.m. in a constant panic state.

How did you prevent that from happening?
We had hired so many people for opening, but none of them really knew what they were doing. We hired them because they had a good attitude and were friendly. My next door neighbor — the owner of Bar Veloce — called and said, you have too many people. You have to trust that you’ll do better with fewer people. He was right. Sometimes you want to throw extra people at the problem, but it doesn’t solve the root of the issue: What’s really holding us up? Did we not order enough ingredients? Is our equipment not efficient enough? We’re always trying to improve every single day, even seven years later.

In your eyes, what makes a great dumpling?
You have to use the best ingredients. Then you don’t need to cover them with salt or spices.

And your mom gave you her recipe, right?
Well, for many years, we had a running joke that she’d never share the recipe with us because it was her way to make sure we’d call her and come home. Three weeks before we opened the restaurant, I called her for the recipe, and she was about to board a flight. And I said, ‘Mom, it’s not funny anymore, we’re opening in three weeks.’ And she sighed and said, ‘Okay, fine,’ and listed the ingredients without any measurements. Typical family recipe fashion! 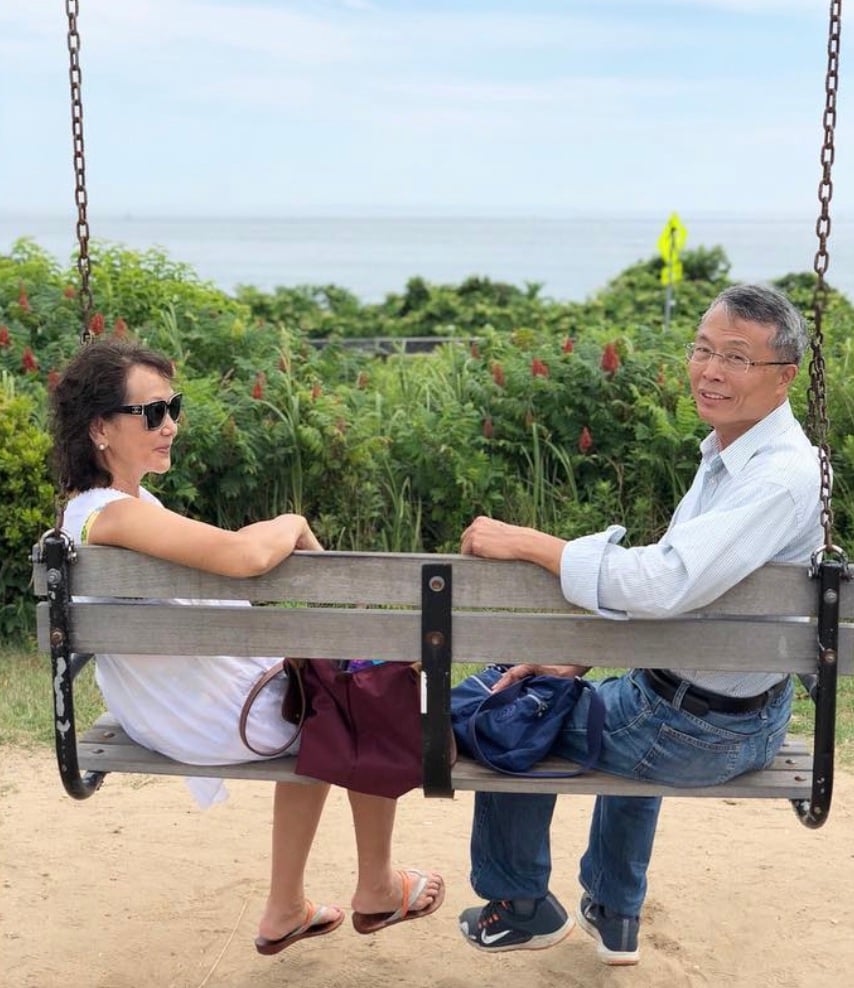 What was her secret?
It’s funny because people will often ask, what’s in the secret sauce? And I’ll tell them, my dad doesn’t even know the recipe, so nice try. 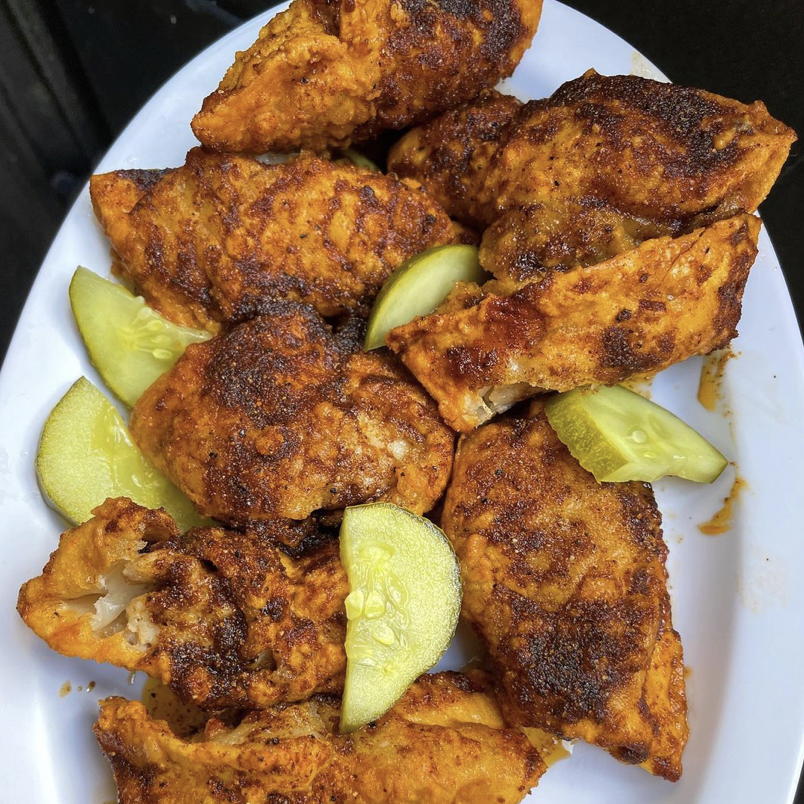 Tell us about some fun specials that you’ve done.
Last month’s was a Nashville hot fried chicken with a homemade ranch sauce. It was amazing. One of our most popular is our cheeseburger dumpling, in collaboration with Pizza Loves Emily. The chicken parm special is also popular. Basically anything we like to eat we try to turn into a dumpling.

On a more serious note, how have you felt over the past couple years — with the pandemic and the surge in hate crimes against the Asian community?
We felt the Anti-Asian sentiment pick up significantly starting in February 2020. Our business declined very noticeably. We also started receiving a lot of anti-Asian reviews labeling our Asian employees as unsanitary. The reviews were all noticeably fake because the details they gave did not match up with our restaurants, which was deeply saddening. Our team was terrified to come to work. We bought pepper sprays for our team members riding the subway, changed our operating hours so that people could get home much earlier, and subsidized Uber rides for a while. We go above and beyond in terms of sanitary requirements because the hurdle for the community to feel comfortable dining at our establishment feels much higher for us. 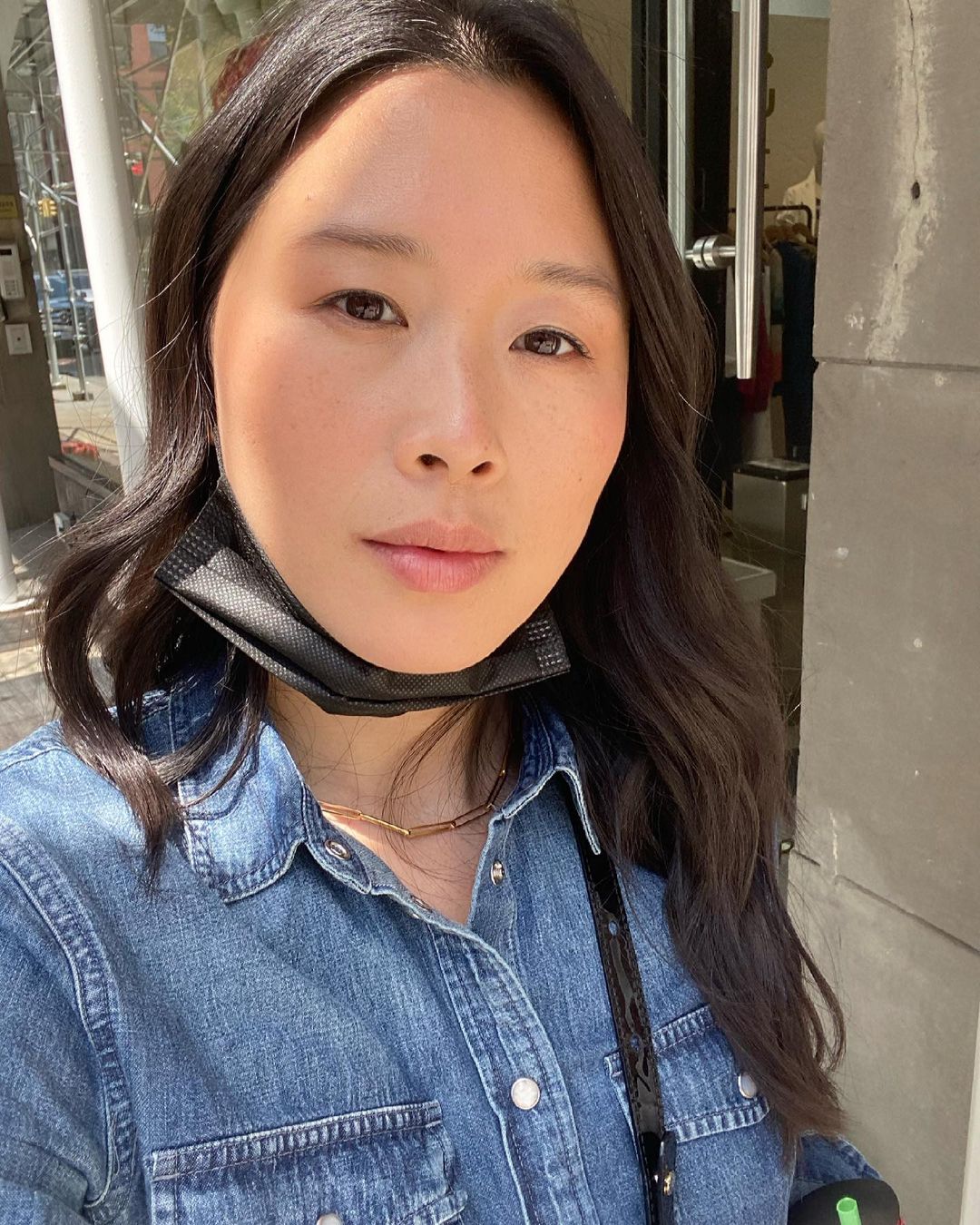 That’s so hard. And you also delivered dumplings to people who needed them.
In March 2020, one of our longtime employees told us about his mom, who was a hospital nurse battling long hours without access to food other than a vending machine. We felt a moral obligation to support the brave hospital staff. We started with a GoFundMe, which caught the attention of Verizon. Then Verizon, Food1st and Rethink partnered with us to deliver healthy meals to frontline workers and seniors, who were too at risk to venture out.

When you have time to take care of yourself, how do you relax? What’s your bedtime routine?
I should lie and say I’m not on my phone! But normally I’m on my phone finding the ends of the internet. It takes me to Zillow. We aren’t moving but I just love looking at homes around the country. 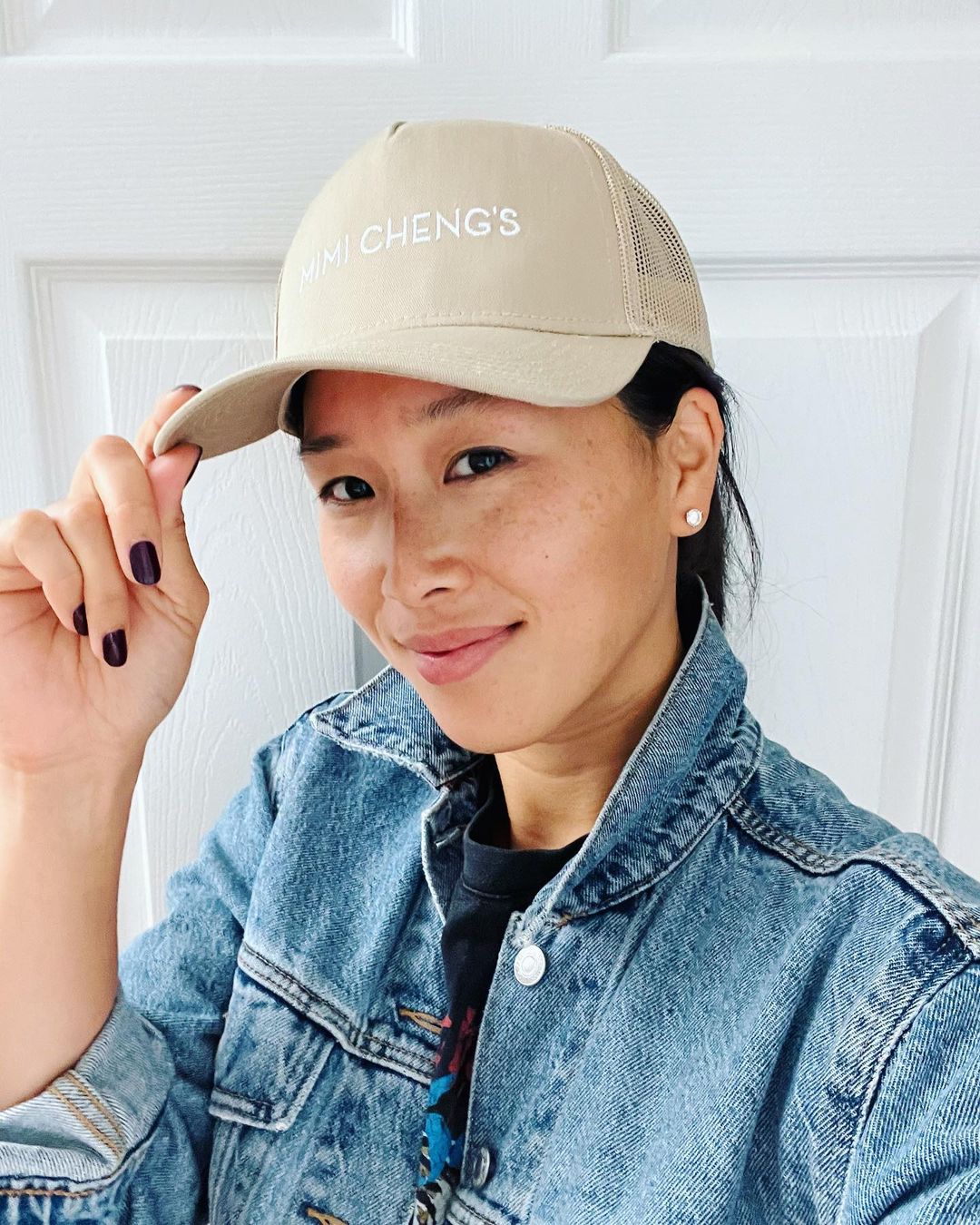 Your mom is obviously a huge influence on you and your sister. What did she teach you about beauty?
Ever since we were in middle school, she told us to wear eye cream and sunscreen. I’ve always put sunscreen on my hands, too. Especially when you’re driving, you don’t realize how much sun your hands are getting.

What eye cream and sunscreen do you use?
Supergoop Superscreen — it’s clean and doesn’t leave that weird thick white film on your face. And Inkey List Caffeine Eye Cream, which I found on TikTok! The price point is reasonable, and it makes a big difference. 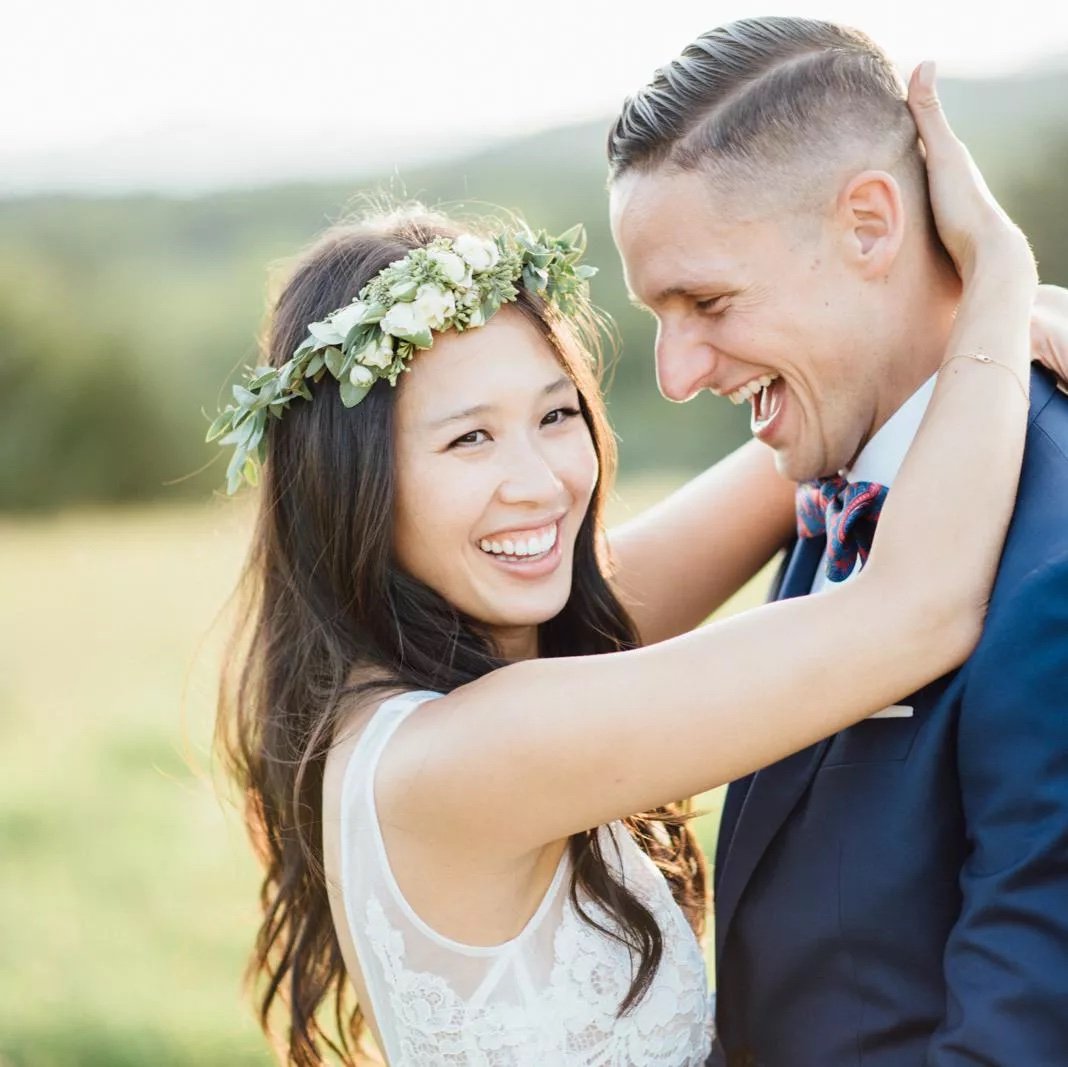 Do you wear makeup?
I don’t know how to do my makeup well, but I swear by three things: concealer, blush and mascara. For mascara, I just use the Sephora samples. And one of my friends told me about the clean beauty brand Westman Atelier; their concealer and blush are creamy and blend in really well. Blush instantly changes your look, and I love that. 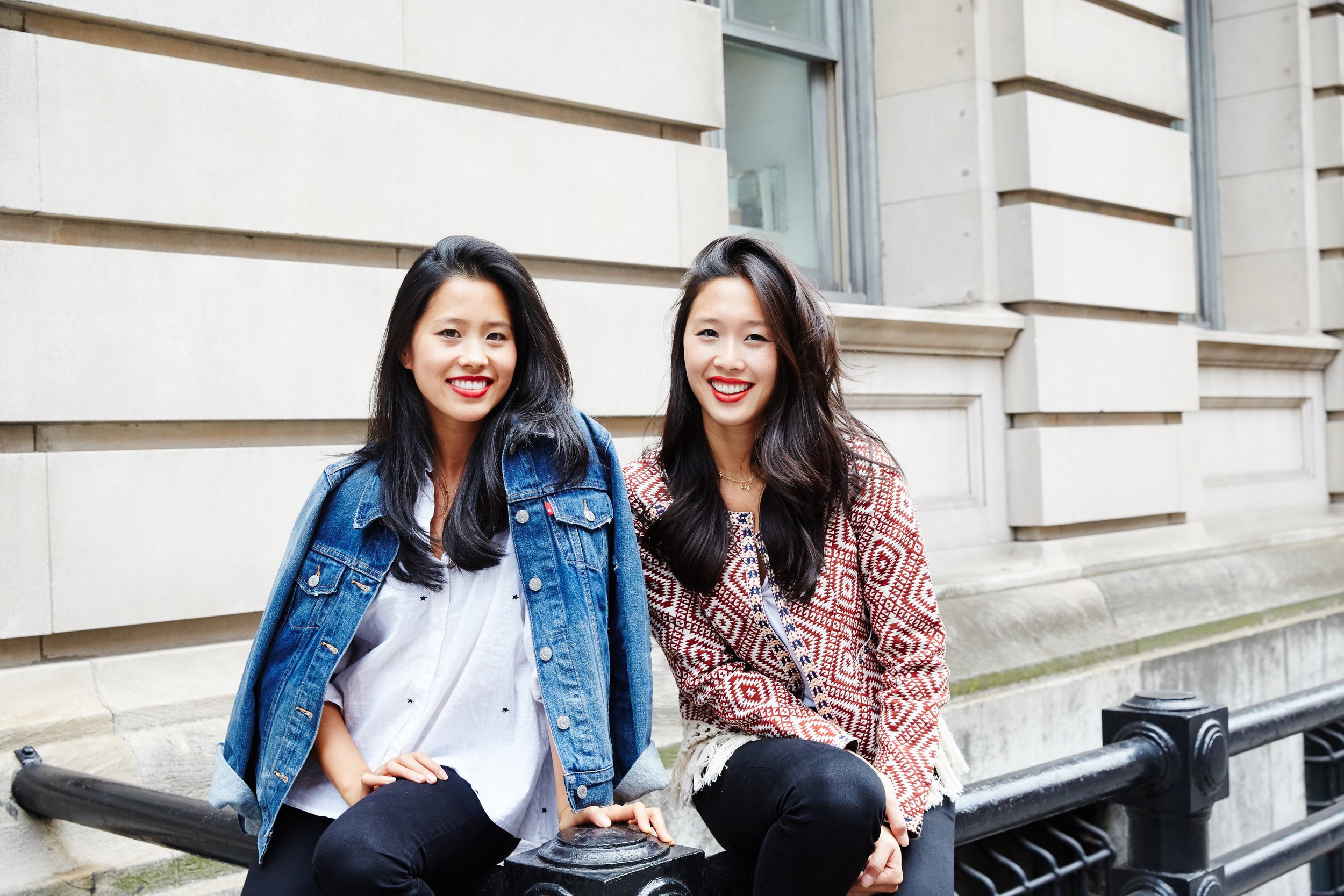 What about lipstick?
Any time you want to look like you know what you’re doing, go for a red lip. There’s a clean brand of lipsticks I love: Bite. They last FOREVER. I’ve never had to reapply, no matter what I eat or drink. My two favorite colors are quince and pomegranate.

Are you a bath or shower person?
Shower. In our shower, we always have fresh flowers or eucalyptus, which gets super aromatic in the steam. I think it’s important to make the small rituals in your life feel special. I just cut few extra stems of flowers from a bouquet and put them in the shower. It’s so easy.

How do you take care of your hair?
I have a Christoph Robin salt scrub that my friends swear by; I use it once a week when I want that squeaky clean feeling. Otherwise, I shampoo with Andalou from Whole Foods. Then I just run my fingers through my hair. When I brush my hair with a brush, it makes my hair way too poofy. 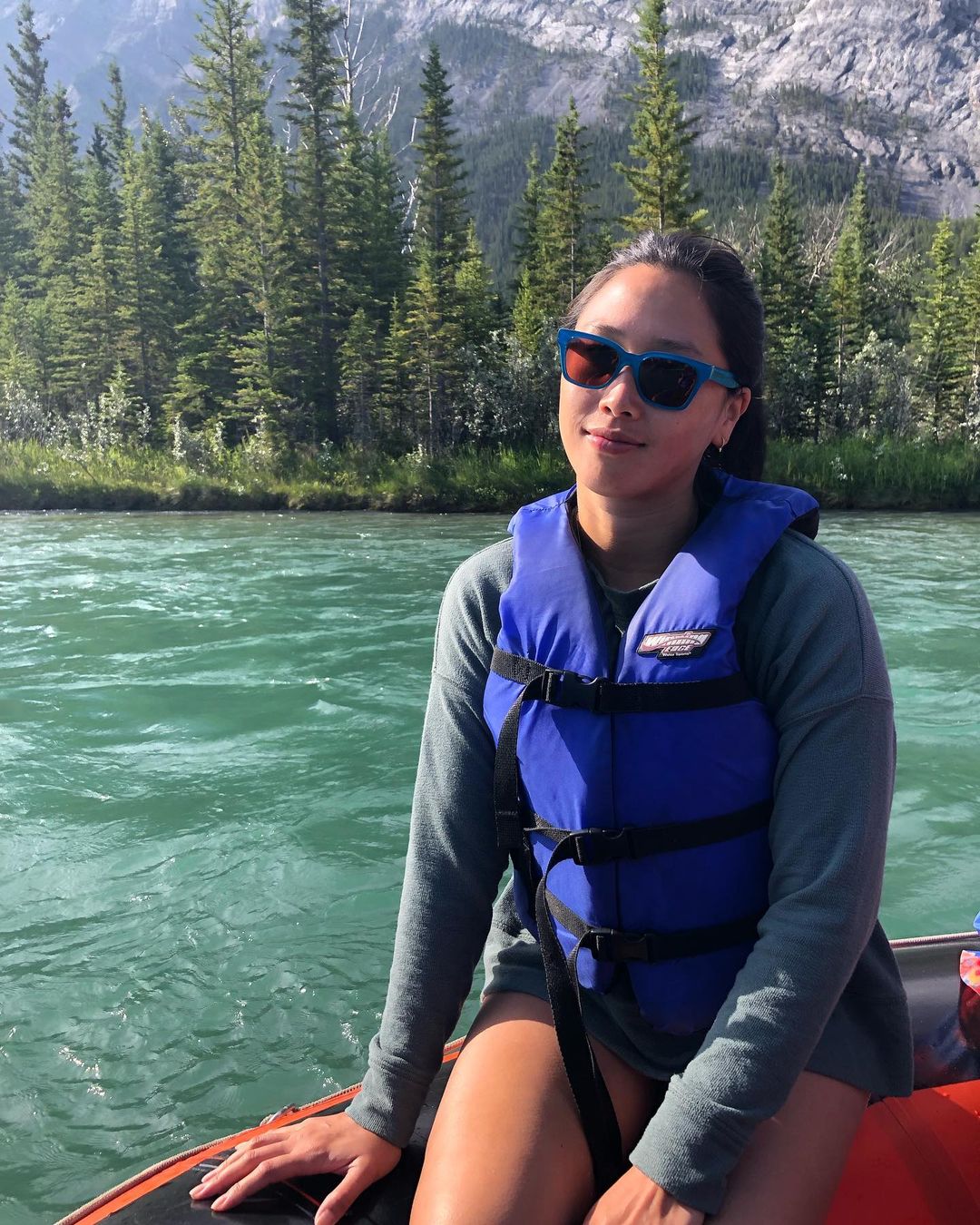 What else in your life makes you feel good?
I’m trying to learn how to play again. As kids, we do so much that brings us joy. And as we get older, we get sucked into focusing on work. So, I’ve been training at Five Points Academy with a Muay Thai instructor — it’s Thai kickboxing. It’s intense and forces you to be present. If you’re not paying attention, you’ll get kicked.

Do you leave the class on a high?
Yes, I feel so strong. I tell my instructor that it’s my favorite part of the week. He says, no pressure! What makes you feel proud?
I’m proud of failing and learning from my failures. That mindset I owe to my mom. Any time I made a big mistake growing up, she would say, ‘That was a really good learning lesson.’ You only fail if you don’t take something away from the experience. I’m proud of my curiosity and zest for life. I’m also proud of how far I’ve come in terms of becoming a better manager. When I see my team thrive, it makes me feel really proud to be a small part of that story.

Thank you so much, Hannah! You are the best.

P.S. More beauty uniforms, including a celebrity chef and a 69-year-old style icon.