My Relationship With My Daughter Is Full of Love and Loss 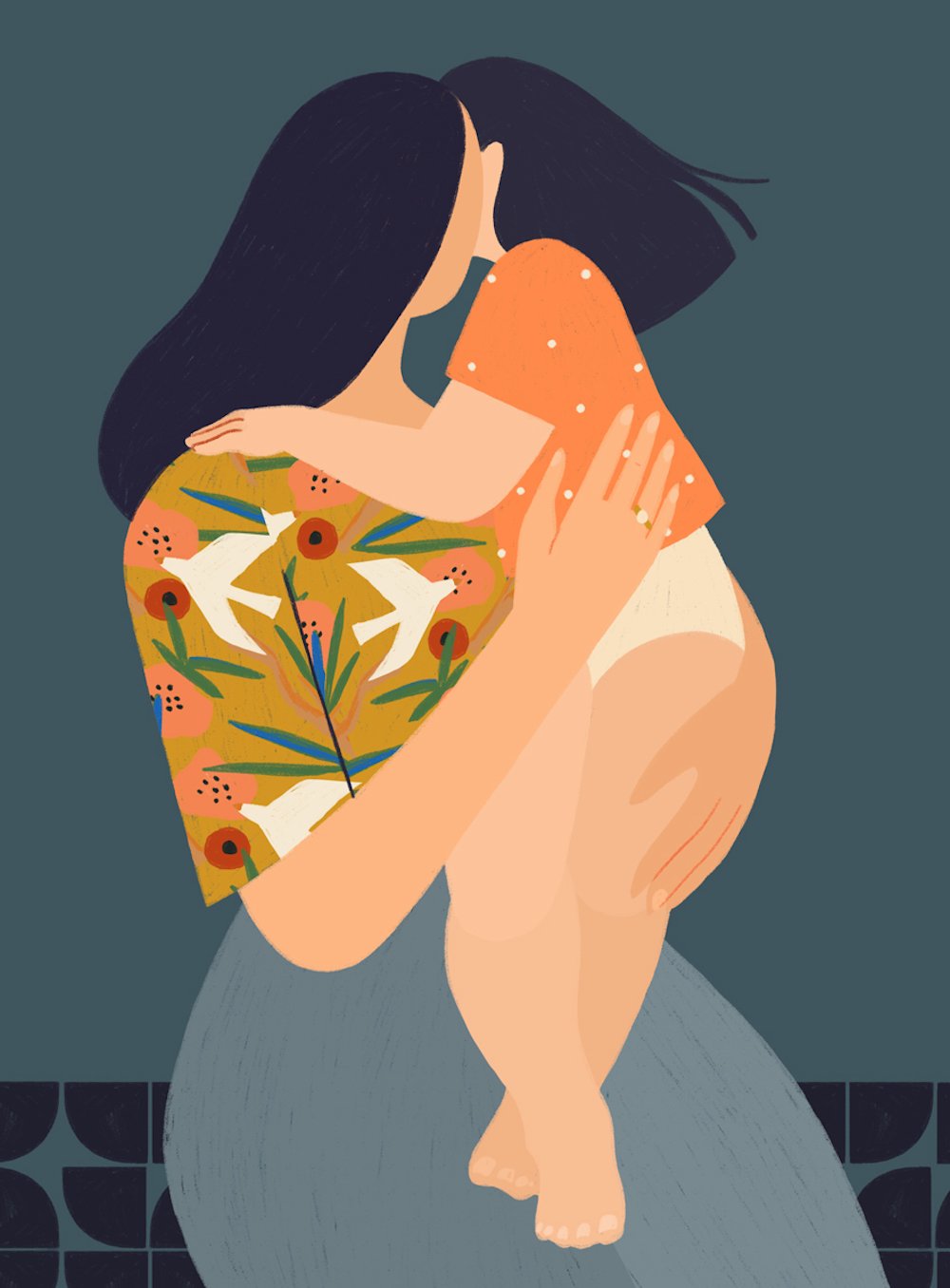 …who turns three in a few weeks, has thick bangs like Audrey Hepburn, and her skin smells like peanut butter. Unlike most babies — Izzy’s developmental age is six months, so I still think of her as a baby — she is not frightened by sudden movements or loud noises. When a gust of wind smacks the front door shut, Izzy giggles. When her seven year-old brother hurls himself onto the couch, and bodyslams his life-size teddy bear yelling “CRAAAASH!” at the top of his lungs, my husband and I cringe. But not Izzy, who snorts and shudders with delight.

I could share endless anecdotes like these, as token celebrations of Izzy’s uniqueness — as proof that I see and love my disabled daughter for the full human being she is.

I know that’s the story you want to hear. The truth is, since Izzy was diagnosed two years ago with a genetic syndrome causing severe intellectual and physical disabilities, I’ve been sad — so sad that, at times, I gasped for air — while mourning the loss of the daughter I thought I would have.

I’ve also been questioning how I understood so little about parenthood until now, while also trying to forgive myself for not knowing the unknowable. Strangely, my mental “warm up” for parenthood included catastrophizing about the possible death of my children, but not the prospect of having a kid who may never walk or talk, or who I’m not sure knows I’m her mother.

I can only imagine actually losing a child, yearning for the warm body to which a mother gave so much of her own self, but can no longer see or hold or smell — I am undeniably fortunate to be able to say that.

The shape of my loss — of ideas, not a body — is more ambiguous. Yet, I’ve learned that it is no less real in its immensity and power to destabilize.

Parents like me are not supposed to talk about their disabled children and death in the same sentence, as I just did. It can be dangerous to the cause. For several decades, disability rights advocates have advanced a platform for equality on the basis that a person with a disability is as fully “human” as anyone else. Their gains have been astounding, all the more so considering how terrible things were before. For most of the twentieth century, disabled people were labeled “idiots,” “imbeciles” and “feeble-minded” by the same professionals who sought to “cure” them. Eugenicists (certainly Hitler) believed that the mere presence of these people weakened the human race. One remedy was to remove them altogether — that’s a polite way of saying that tens of thousands of disabled people were cordoned off in prison-like institutions, where some were involuntarily sterilized, or killed.

To compensate for the crimes of previous generations, modern narratives tend to celebrate the full humanity of disabled lives, as if to say, “Do not mistake disabled for dead.” You know the stories I’m talking about — people with disabilities who are defying the odds by competing in the Paralympics, founding nonprofits or testifying in a wheelchair on Capitol Hill.

The problem is, for many parents of children with disabilities, these narratives of triumph are misrepresentative. At best, they depict an untouchable fantasy. At worst, they narrow the channels of perceived social value by sending the message, “we only care about heroes,” while reinforcing an ideal that few parents can live up to.

I’m intimidated by how thorough my shedding of ideals about Izzy’s potential needs to be. Like air, hope is everywhere; for parents, it can be a drug. To make room for the presence our children require of us, we need to depend less on hope — which for me, is a sort of death. It may be painful to relinquish the visions we had for our children, but it’s even more painful to cling to expectations that we discover, over and over again, are unlikely to pan out.

Allow me a story of how high I once was on hope. While I was pregnant with Izzy, my husband and I went back and forth on the spelling of her full name — should it be Isabel, Isabelle, Isabella, Isobel? I lobbied for Isobel because of a really fun “underground” party I went to as a teenager; it was the first time I heard the song by the same name (and spelling) by Björk, the iconic Icelandic performance artist. Björk’s trippy beats and haunting lyrics temporarily transported me from my suburban malaise, and the memory shimmers in my mind.

After my husband and I settled on the spelling, I imagined — in vivid detail — my future conversations with teen-aged Isobel about why I’d “burdened” her by choosing the “difficult” spelling for a common name. That’s how Björk spelled it, I’d say, before playing the song and reveling in my memory of being 17 years old. I’d roll the video on YouTube. Again?! Izzy would exclaim, rolling her eyes, but secretly captivated by the haunting black-and-white imagery of Björk as a forest nymph among skyscrapers rising from a bed of leaves. Oh, Mom, she’d say, her eyes transfixed on the screen. On the surface, Izzy would act embarrassed by my hopeless old-personness, but deep down, she would love me for it.

Izzy and I will likely never have this conversation, though her name is a relentless reminder of my silly reasoning for choosing it. But Izzy has also woken me up to a more authentic and meaningful way to be a parent. And I’m finding that this new approach — parenting with realism, eyes wide open and, borrowing the title of one of my favorite podcasts, an attitude that “everything happens” — well, it’s a lot less squishy, and more reliable, than hope alone.

Hope discolors even the most neutral standards — age, for instance. A child’s age is a number, a measure of the time she’s been alive. Too often, achievement-oriented milestones are attached to a child’s age, and all sorts of ableist presumptions start to explode like fireworks around it. Grace is six months and already crawling! Billy turned three and has his first 250 words! Zora is seven, can count by tens, and is well on her way to Harvard!

Parents of disabled children understand first-hand how kids develop at their own pace. In the safety of our homes, we tell ourselves, “Every kid is on their own timeline… age is just a number.” But maintaining this belief system gets challenging as soon as we go outside — and start interacting with the medical, educational and social norms that depend on biological age as the predominant measure of child development.

I remember the weeks after Izzy’s diagnosis, marching her to evaluations with the geneticist, neurologist, nephrologist, ophthalmologist, audiologist, immunologist, physical therapist and occupational therapist. In their waiting rooms, I completed the same age-based questionnaire: “Does your baby show interest in interacting with others? (such as peek a boo)” No. “Does your baby pass objects from one hand to the other?” No. “Does your baby pick up her head and push through elbows during tummy time?” No.

“But happy and healthy!” I squished into the side margin more than once, wondering if anyone ever reads these things.

All those times at playgrounds, in swim class, on the curb outside my son’s school, when other moms asked me Izzy’s age, the most innocuous way for any parent to break the ice, I answered plainly — while flexing every muscle at my disposal to conceal the toxic car fire of shame and guilt burning within. They would reply: “Ella is exactly one month older!” or “A Leo! Lucky girl.” The but remained stuck in the back of my throat. I rarely shared Izzy’s developmental age which, for most of her first and second years of life, remained fixed at three or four months old. It was simpler to let the conversation peter out.

When Izzy’s disabilities became more visible, once, I lied. “About seven months,” I said, when the answer was really fifteen. Never one to judge an occasional white lie, I was taken aback by how terrible it felt. I was trying to protect myself from the uncertainty of others’ reactions — to save myself the chore of answering their questions, being the receptacle for their pity, or feeling judged by their silence. But in the act of lying, I felt worse — ashamed at myself for acting as if I were ashamed of my daughter. Lying felt cowardly, like a betrayal of Izzy, and a step backward on my path toward acceptance. I never did it again.

I wake up some mornings convinced that I’m living a parent’s worst nightmare — one that modern medicine is designed to prevent. While pregnant with Izzy, I’d taken the tests designed to stamp people like her out of existence. After her diagnosis, I was both furious at the system for not catching her syndrome and wracked with guilt for my complicity in the ‘progress’ to prevent her. Somehow, Izzy slipped through the cracks and into existence, a reality I view with equal awe and rage. She is both miracle and mistake.

But most days, I relish the solidity of the ground beneath my feet. It’s a footing that hope alone, by its very nature, can’t provide. Standing here feels like freedom, which I’d always imagined would be more like floating. Rather, it’s more of a re-anchoring in realism, a readiness for the expected, unexpected and everything in between.

I think I’ve come a long way — Izzy’s upcoming birthday will be a good test. When her brother blows out her candles, will I feel stung by the loss of her not being able to do it herself? Might there be joy in what is?

We find out in three weeks.

Julie Kim worked in tech, design and publishing for many years before becoming a full-time writer in 2018, following her daughter’s diagnosis with 1p36 deletion syndrome. She lives in Oakland, California, and is currently working on a memoir about raising a disabled child.

P.S. How to navigate a special needs encounter, and parenting twins: one has Down syndrome, the other doesn’t.

By Joanna Goddard
Motherhood
How Did You Know You Were Ready to Have a Baby?
February 3, 2020

601 COMMENTS
By Elizabeth Holmes
Motherhood
6 Fun Things About Meghan and Harry’s Royal Baby (and His Name!!!)
May 8, 2019

133 COMMENTS
By Catherine Newman
Motherhood
How to Raise a Gracious Kid
January 27, 2020