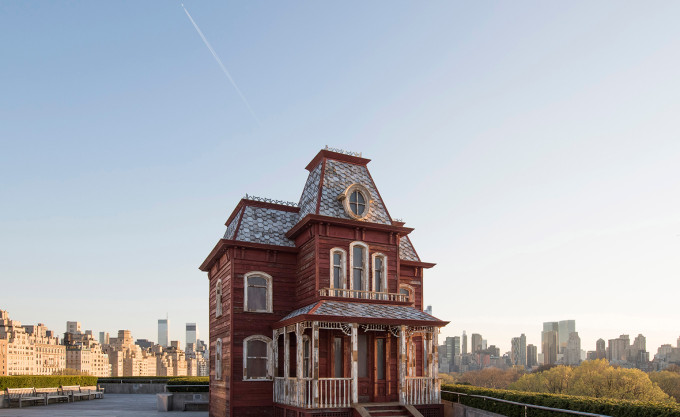 Have you seen the new Metropolitan Museum of Art rooftop exhibit? Every year, they feature a different installation in their roof garden, and this year, British artist Cornelia Parker built a house. 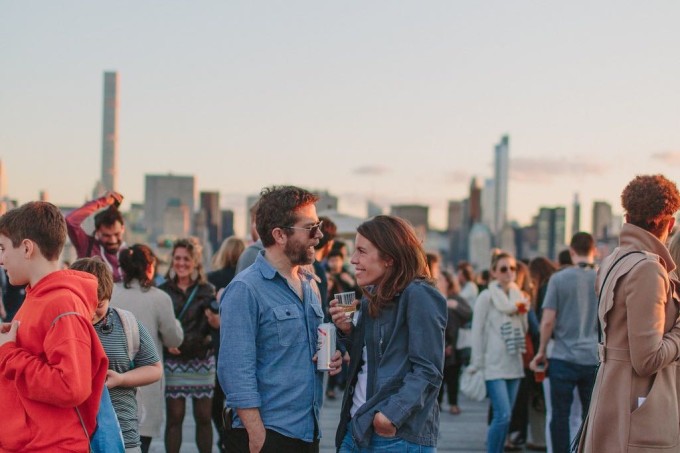 Alex and I rode bikes up there last weekend. Here’s what it was like… 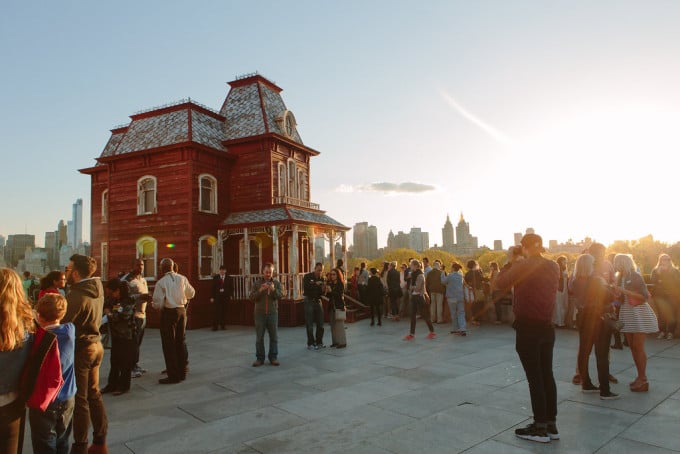 When approached to create an installation for the rooftop, Parker was “very daunted because the skyline is so amazing,” she says, so she wanted to create something architecturally incongruous. 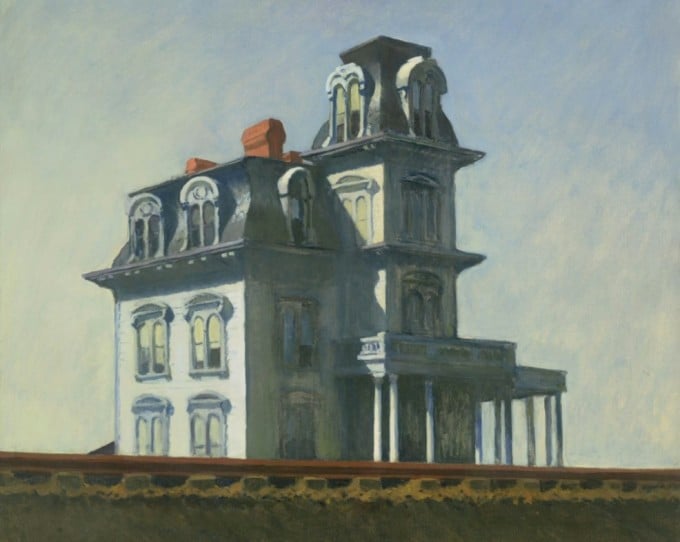 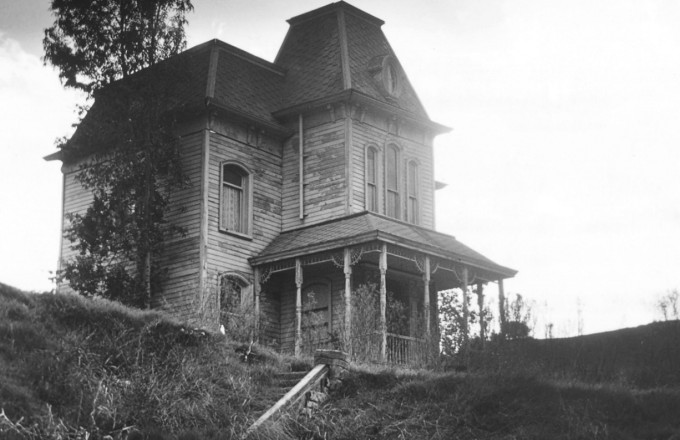 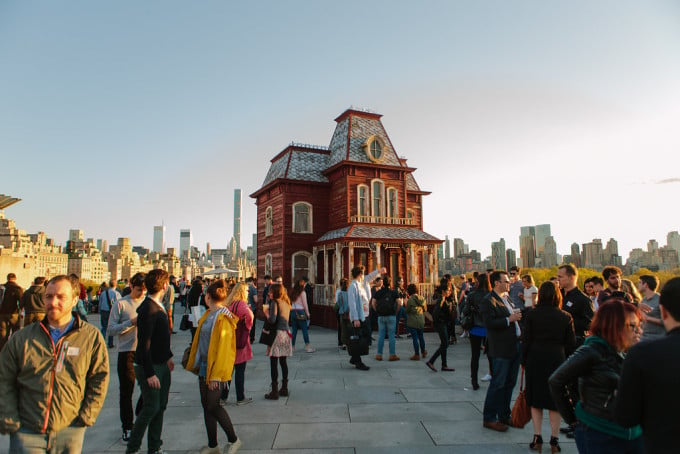 So, Parker created a replica of the Psycho house, using the salvage of an abandoned barn in upstate New York. (When it rains, says Parker, it has a faint smell of manure.) 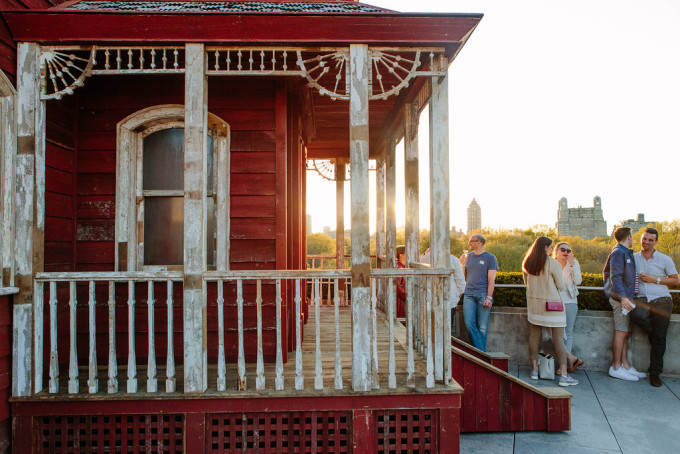 The Victorian house feels at once creepy and beautiful, as the sun streams around the faded porch columns. And, as Parker wanted, the scene definitely feels incongruous — a crumbling rural home above a venerable museum, flanked by lush greenery and sleek skyscrapers. 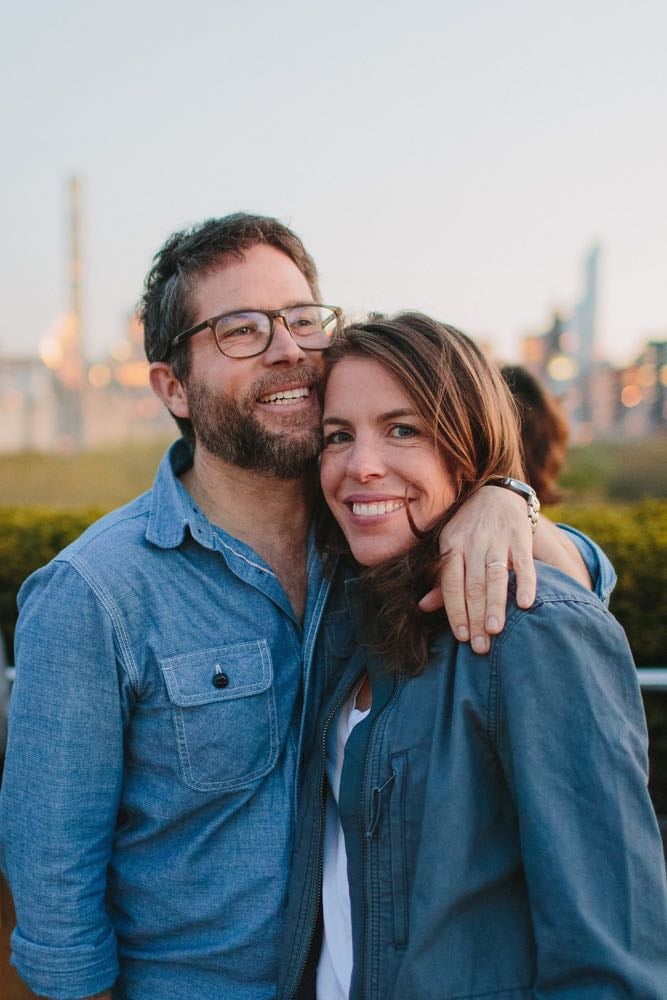 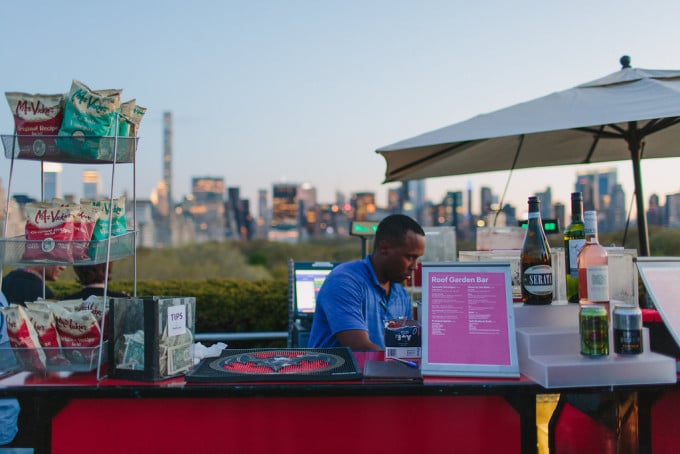 You can get drinks and chips, and watch the sun set. Also, since the rooftop closes 45 minutes earlier than the museum, you can stroll around inside the museum afterward. Always such a thrill. 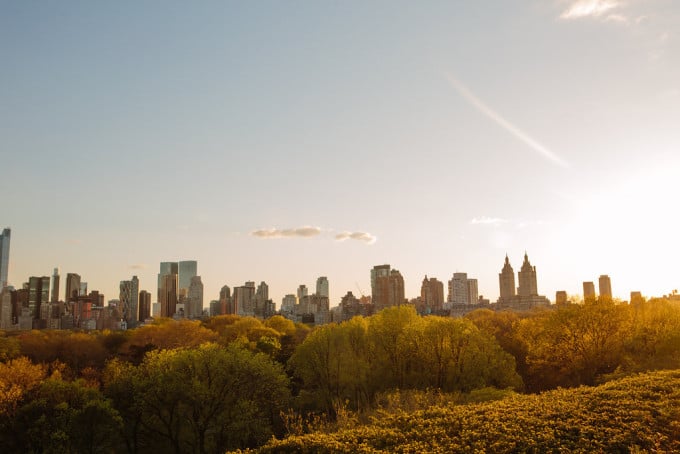 Have you been already? Will you check it out? I’d highly recommend it!

P.S. Swings, fountains, and the Cup of Jo Guide to NYC.

(Photos by Rebecca Zeller, a photographer and friend who also wrote the post 10 Surprising Things About Parenting in Norway. Top photo courtesy of the Met. For those who asked, my jacket is from Madewell.)

Wow, that exhibit is so cool! I will definitely visit during my next trip to the city. You and your husband look absolutely adorable together.

that photo of you and alex looking at each other is just adorable! this is on my to-do for when my boyfriend visits me in nyc. this house is so creepy but eerily beautiful at the same time. very cool

This is so beautiful, Thanks Joanna for bringing it to all the people who so obviously cannot visit the installation :)

This looks like such a wonderful and unique exhibit! I studied architecture in University, so this is something that I would really enjoy! Thanks for sharing this, I had no idea!

Oh wow, so cool!! I love the contrast of the old Victorian house against the modern city.

off topic, but what brand are alex’s frames? thanks!

Such a sweet story. Thanks for sharing!

You two are way too cute! Cool date nights like this make me wish I still lived in NYC! Will have to make a date trip out of it then ;) – Charlie, http://www.lemonbutterlove.com

I love the Met rooftop and go up for a sundowner every time I visit NYC from Germany, which hopefully will happen again next summer (it depends on who is the next president. If Trump makes it, this will be a reason to not visit America for at least 4 years. An awful prospect!).

What a fun idea that house is! I must read deeper into it. My daughter would love it – what a pity, that its only there for this season! Funny enough I recognized it as looking similar to the building from the famous Hopper painting! If I were an artist, i would plant a field of corn up there with a maze in it.

You and your husband look beautiful together, so relaxed! On another not: it always makes me sad and angry to see cans of beer or other drinks sold at public places. Cans are the worst for the environment and I don´t see why they are not banned. Its such a pity that an institution like the Met doesn’t lead the way in showing alternative ways of treating that issue!

I love the photo of you and Alex. What a beautiful, sweet couple!

I love the picture of you and Alex. What a beautiful, sweet couple!

Look at you and Alex in all your denim! Britney and Timberlake throwback!

hahaha that’s what we were going for.

I went there almost by accident when I visited New York last October, and it was amazing! The weather was still really nice, so I kinda just sat there for an hour, looking at the NY skyline and enjoying the sun. I would definitely go back there, if I ever get to NY again (and then bring the boyfriend along for a fun date) :) Thumbs up!

This is so cool!! I want to go so badly!!
xo
http://www.laurajaneatelier.com

This is great! In a similar vein (but also totally different), have you heard of Meow Wolf in Santa Fe, NM? It’s a hands on art installation that features a Victorian house that was built inside an abandoned bowling alley and features portals into what can be described as other realms. It’s truly amazing!
http://www.nytimes.com/2016/03/21/t-magazine/mystery-house-santa-fe-george-rr-martin.html

This looks so cool! I may be in NYC mid May, and will definitely have to suggest this when we start building an itinerary!

OK, this looks like the most magical date ever. The lighting is incredible in your pictures.

Love this. And I love the way you’re looking at him. So cute, you two. xo

Reply
tara
Reply to  nicole b.

I thought so too, you can see the love…beautiful

This is awesome! I love that Alfred Hitchcock was inspired by the same painting.

What a great date night! Thanks for the idea! Also, where did you find your cute jacket from?!

Thank you! It’s from Madewell: http://bit.ly/1SNoIi9

love that picture of you two — and your top!

We go to the Met every Saturday for a couple of hours. We”ve been doing it for 3 years and always, always find so many new things. It’s one of the best things about living in NY and it’s a great date with my husband. Now if only they would organize adult sleepovers!

that’s so sweet, what a great idea.

This makes me wish I was in NYC instead of London, what a great idea for an installation. I love how closely it resembles its inspiration too because, despite what the Psycho house was used for, it was quite nice to look at! Do you know if the rooms were built up inside, or is it literally just the exterior?

it’s the exterior — actually, the front and sides (not the back), which is similar to how hitchcock used the set of the house when filming the movie bc they were on a tight budget. here’s more about it, if you’re curious:
http://www.retroweb.com/universal_psycho.html

You both are a lovely couple. I wish I could go on a date with my hubby.
It is hard for us to go for a date, without the girls.
I’ll take you as an inspiration.
Thank you!
Xoxo