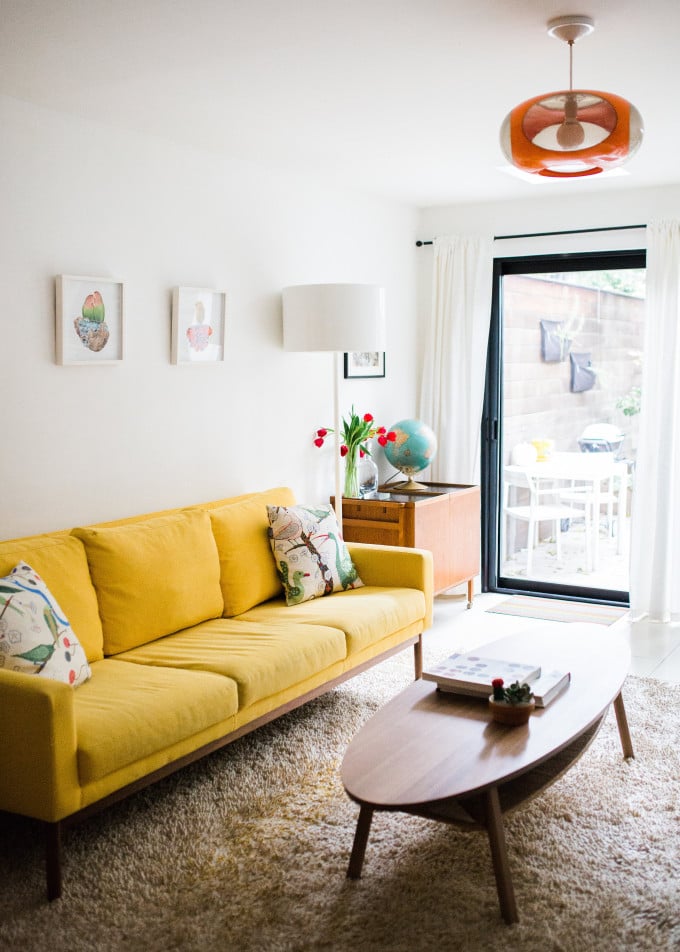 Shannon Althin, founder of children’s bedding line Natti Natti, lives with her husband and two children in Park Slope, Brooklyn. When we saw photos of her home, we immediately fell in love (and wanted to move right in). Here’s a look inside… 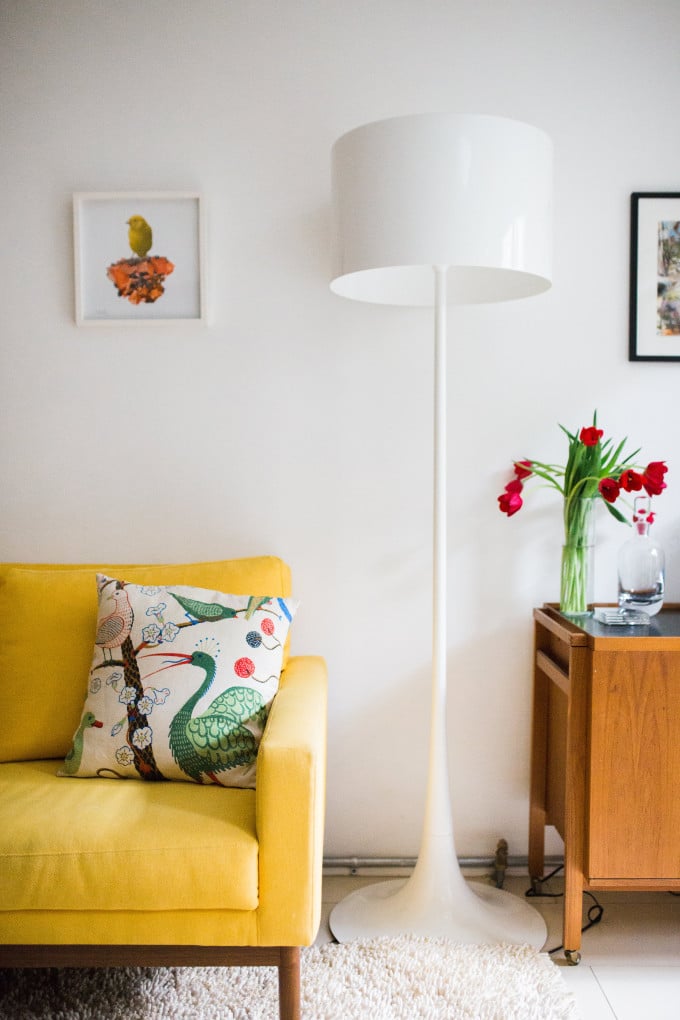 On the joy of IKEA: Since my husband Eric is from Sweden, we’ve always loved IKEA. But they’ve really stepped it up lately by partnering with great designers. We recently bought our coffee table there. It’s thin enough to leave room for our family dance parties!

On shopping there: When it comes to IKEA, it helps to have a plan. I gravitate toward the wooden pieces, and their kitchen stuff is great. I had been searching forever for a cutting board, and I found one that hugs the edge of the counter — it’s magical! I also look at the items online first and write down the item numbers, which really helps. 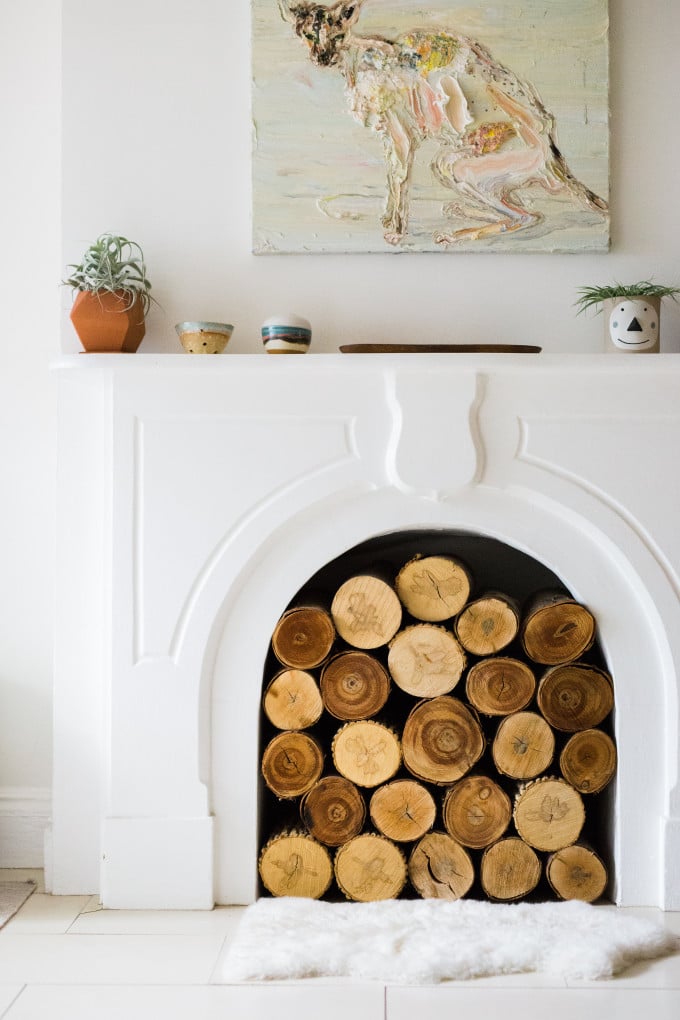 On keeping things clean: Our house gets messy so quickly. (Obviously, we did some major cleaning before we took these photos!) I straighten up every night once the kids are in bed. When it comes to deep cleaning, I’ll pick one day each week and just jam it out. The biggest challenge for us is actually the yellow couch, which we usually keep a blanket on. I’ve discovered that Mr. Clean magic erasers are genius. They even take scuff marks off the walls.

On favorite neighborhood haunts: Park Slope’s brownstones and trees feel neighborhood-y, and there are so many great restaurants. We love sushi and were excited when Katsuei opened up. We go to Sidecar a lot for amazing fried chicken. When it’s warm out, we take the kids to J.J. Byrne playground, followed by Culture, a frozen yogurt place across the street. 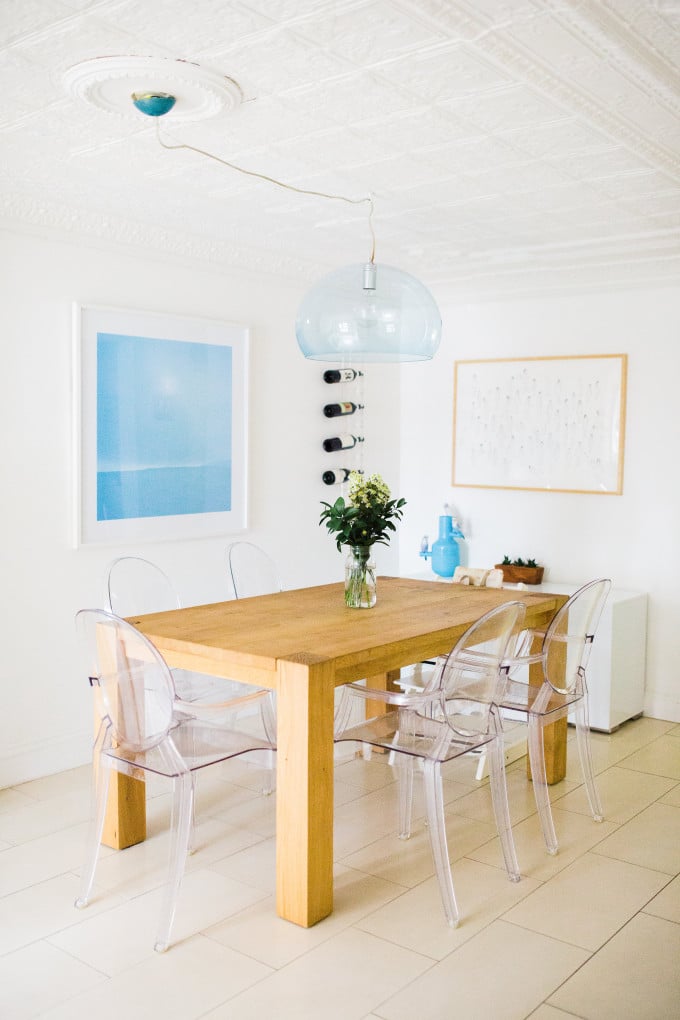 On hanging art: Eric and I used to run a gallery and still have some beloved art from that time. When it comes to hanging art, you don’t want to overcrowd it. If you have a few smaller pieces that either share a theme or the same color palette, consider grouping them. If you have one big piece, keep it on its own, and hang it roughly at eye level. Don’t be afraid to experiment and move things around. If you work in a certain area, you don’t want something distracting or emotional. In small spaces, it’s nice to find something that lends depth. In a bedroom, consider neutrals, which create a calmer environment.

On finding affordable art: Since original art can be so expensive, it’s helpful to look for limited edition prints by artists you like. A few of our favorite online galleries are Spoke Art, Thinkspace, Art Whino and The Cotton Candy Machine. 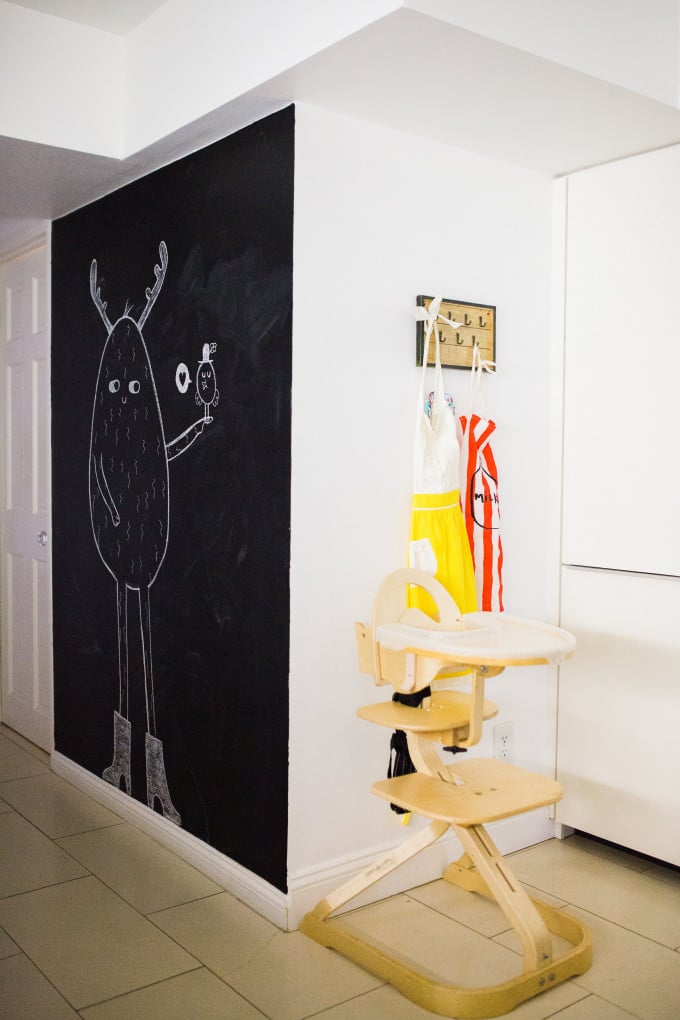 On favorite family meals: Lately the kids have been helping me cook. Luke is the designated taste taster, and Emma’s gotten pretty good at cracking eggs! One of our go-to dinners is a one-dish Mexican casserole. We’ll mix chicken, beef or pork with quinoa, tomatoes, black beans and sour cream. Another easy dish is tortilla pizzas, which are common in Sweden. You just buy tortillas, top them with pizza sauce and let the kids add whatever toppings they want. We eat Swedish food a lot — I’ve finally perfected Swedish meatballs.

On family travel: Every summer, we try to visit Eric’s family in Sweden. It’s beautiful, and we love to do traditional things like picking berries and mushrooms in the forest and swimming in the cold Baltic sea. 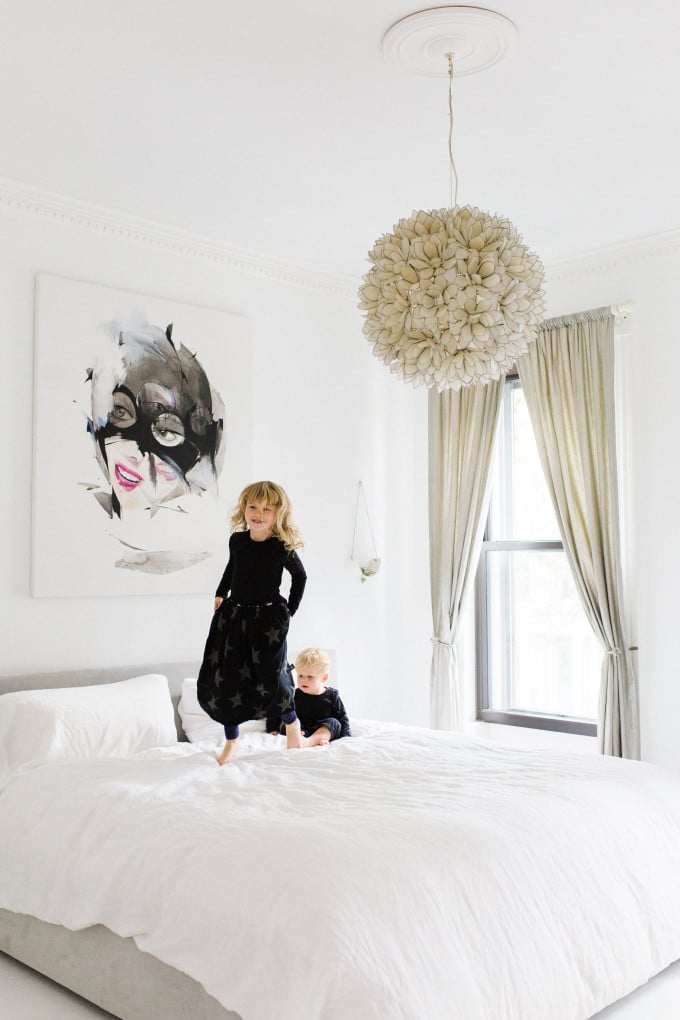 On embracing white: I’ve always gravitated toward a Scandinavian aesthetic — with lots of white to brighten up the colder months, and pops of bright colors to add cheer. I’d say if you’re going to go for a white space, do the white-white! I’ve made the mistake of doing something slightly off-white, and once it was covered and filling up the space, it doesn’t give you the brightness you’re going for.

On linen sheets: We used to always have IKEA sheets, but after many washes the quality would worsen. I had read that linen is similar to wool in that it keeps you warm in the winter and cool in the summer, so I bought these linen sheets and I really like them. They’re also really forgiving when it comes to things like wrinkles, which is a biggie for us. 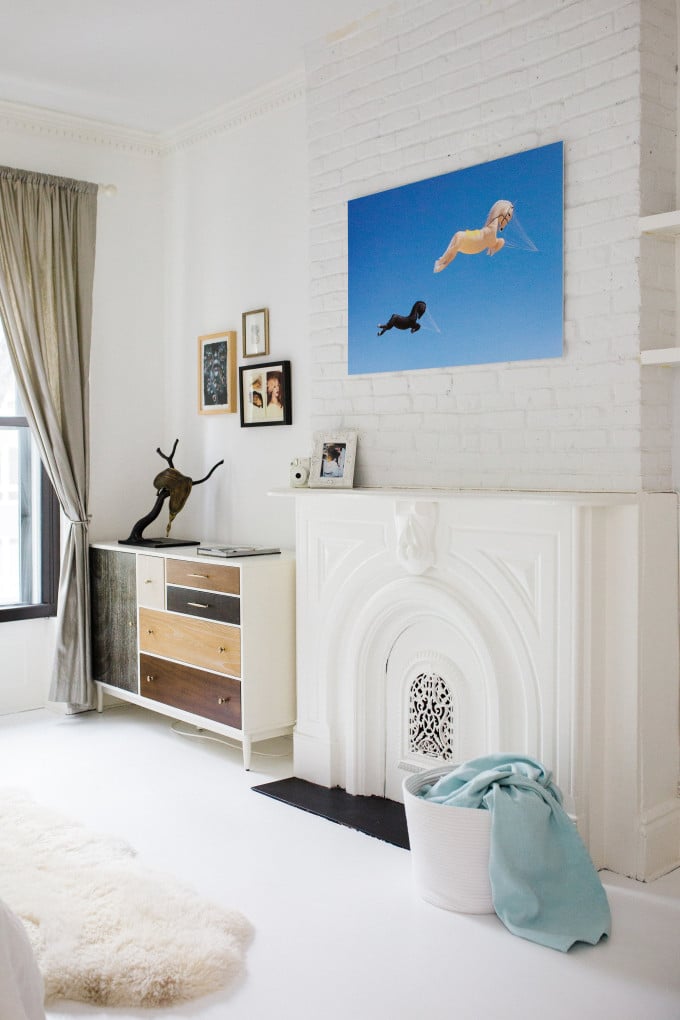 On creating art: One day, we were at Coney Island and we looked up into the sky, where this huge horse kite was flying. I ran to take a photo, and then a second one went up! My son was making horse sounds while this was happening, and he loved them so much we were like, let’s blow this up. Our favorite printer, Rolling Press, mounted it on foam board. They do everything with eco-friendly inks, and print using wind power. 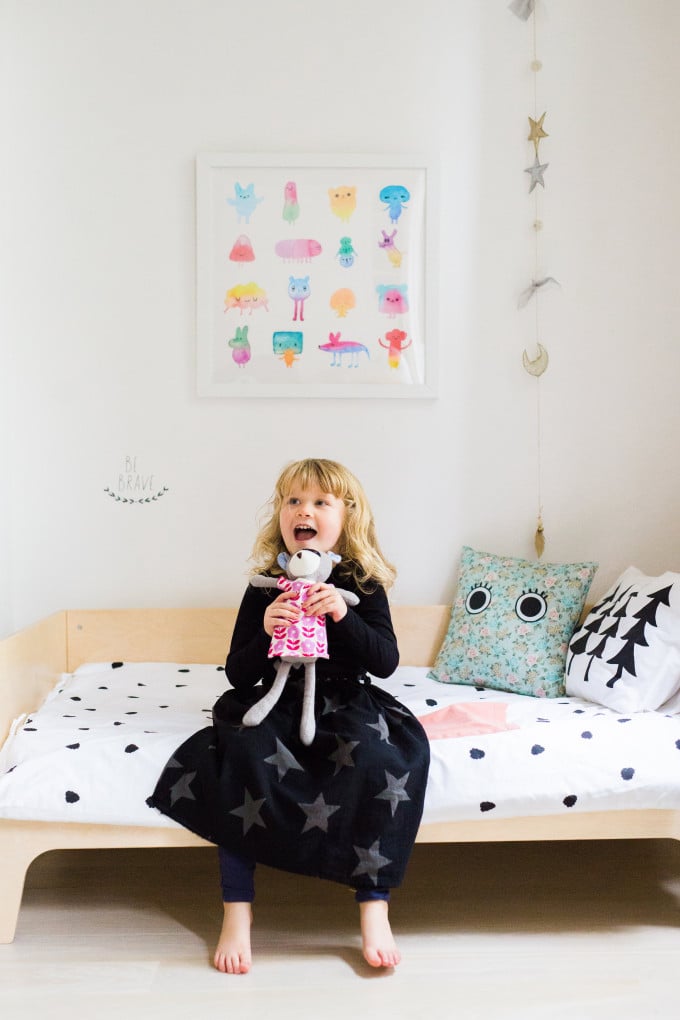 On an impromptu guest room: We installed a Murphy bed in Emma’s room, which is the best thing we’ve ever done. We also use it as a guest bed when our relatives visit. It’s super easy to take it up and down, so sometimes we’ll pull it down from the wall so we can all snuggle together.

On story time: We often read a few books with the lights on and then, to wind things down, we turn off the lights and make up stories or listen to audiobooks, like Storynory. For a while, we were reading The Princess Bride, which Emma really enjoyed. Because it didn’t have pictures, it was less stimulating than a picture book. It made a surprisingly great bedtime story. 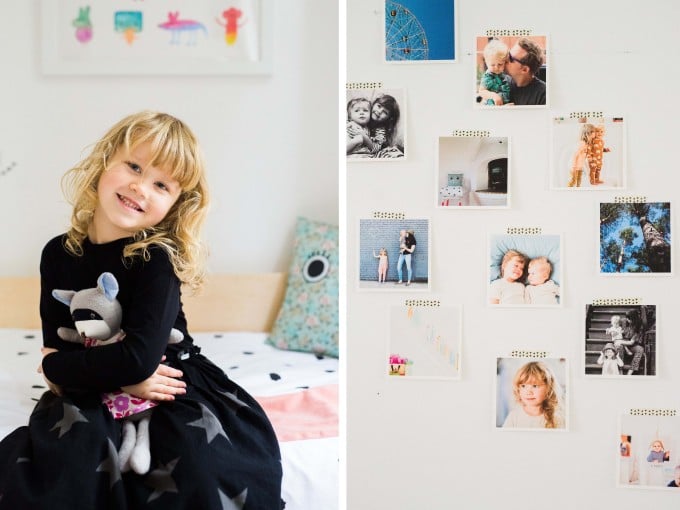 On the easiest gallery wall: We print family photos with Artifact Uprising. Their app lets you access your photos straight from Instagram, and then they mail you printed copies. If you hang them up with washi tape, you can swap them all around.

On passing things on: Every so often we’ll go through our toys and clothes and donate things to Salvation Army. As Emma has gotten older, I’ve tried to give her a little perspective and I think it resonates with her. She’s very willing to pass something on knowing that another child can get joy from it. 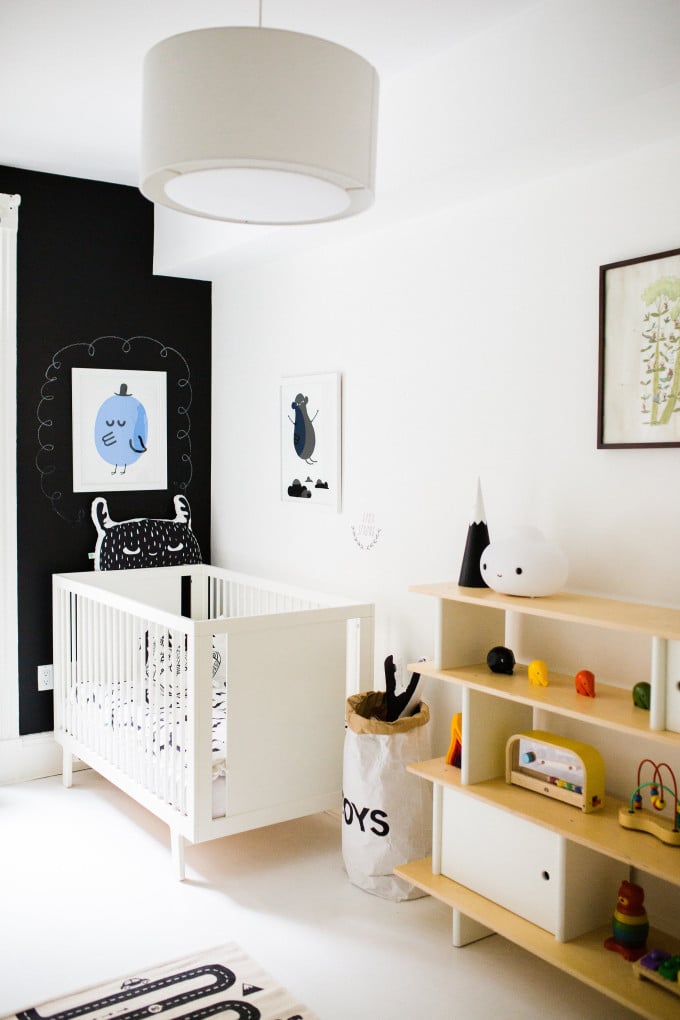 On having an artistic family: Eric is an artist, and he loves to draw creatures, which Emma calls his “dudes.” He’s inspired by Japanese toy design; at least once a week some random box shows up and he gets all excited and runs to the door like a little kid. Recently, for fun, our daughter Emma will sort of direct Eric. She gets very specific about it — she’ll tell him exactly what to draw and how to do it. Then they’ll color it together and cut it out. It’s been really fun to watch them collaborate. Recently, they drew two foxes, and I’m going to use it for a Natti Natti pattern!

On cleaning up said artwork: Two-year-old Luke has also started to draw, but he likes to use permanent marker. He’s gotten it on a few pieces of furniture. And then he runs away. Luckily I found this cleaner called Better Life, which is a white, all-purpose grit. It’s the most brilliant thing, and it’s been getting the marker stains out. 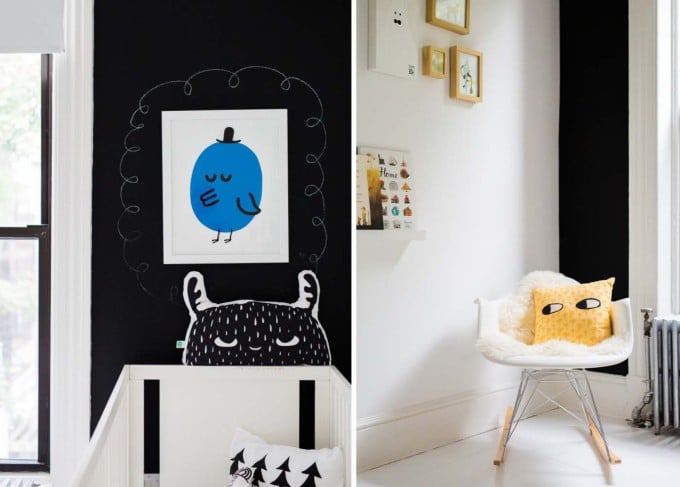 On a funny ritual: We have a Swedish bedtime song about a troll mother. When she puts her 11 small trolls to bed, she hangs them up by their tails. It’s weird and silly, but it has a beautiful, sort of haunting tune to it. I learned it as soon as Emma was born and we’ve consistently sung it to both kids since then.

On the inspiration behind Natti Natti: When I was pregnant with Luke, I learned how to sew, because I thought it would be fun to make the kids their own leggings. I enjoyed it so much that I started a company making things for kids. Bedtime has always been a challenge for us, as I know it is for many parents, so we were like, let’s create some bedtime products that make both kids and parents happy. The name Natti Natti means “night-night” in Swedish. 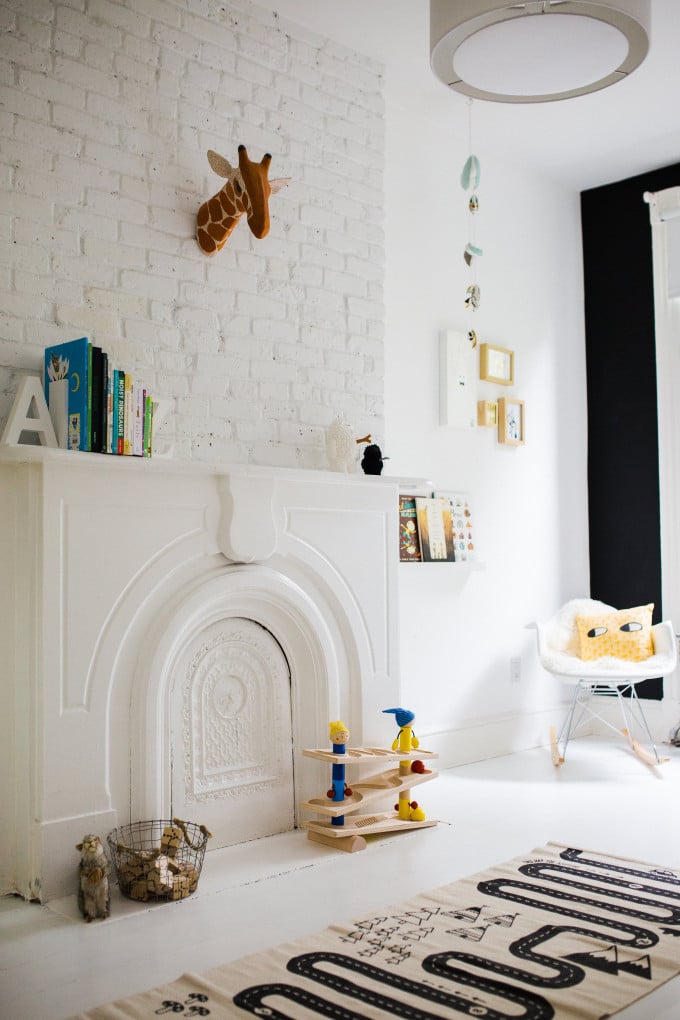 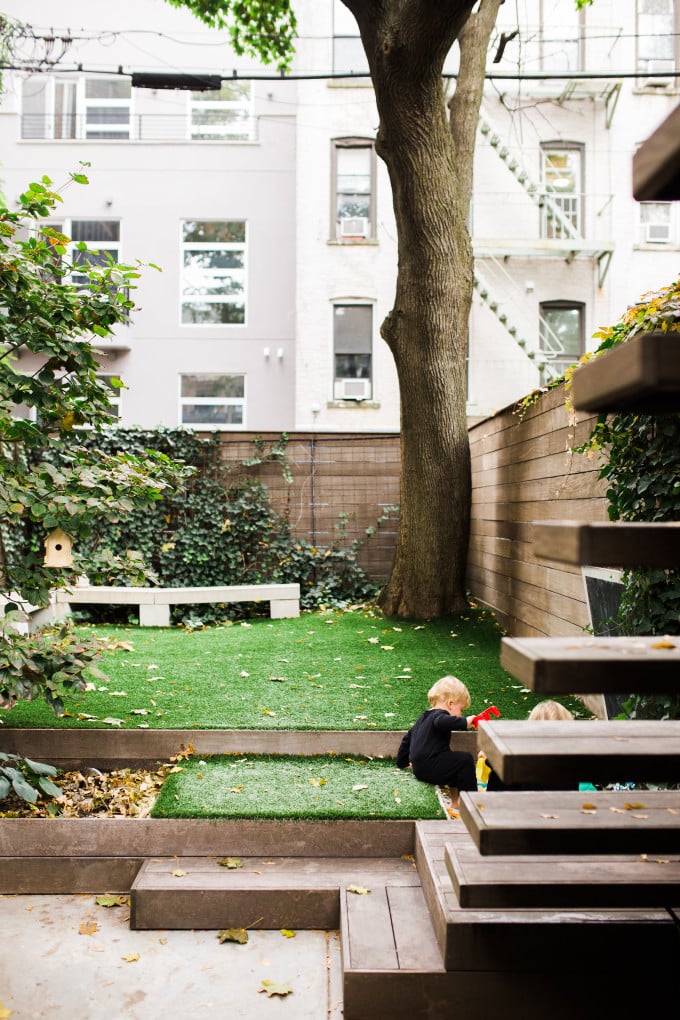 On creating a place to play: When we first moved in, the backyard had two little flower beds, but Eric and I turned one into a sandbox. It’s great to have a place where the kids can play freely and we don’t have to worry about them wandering off. 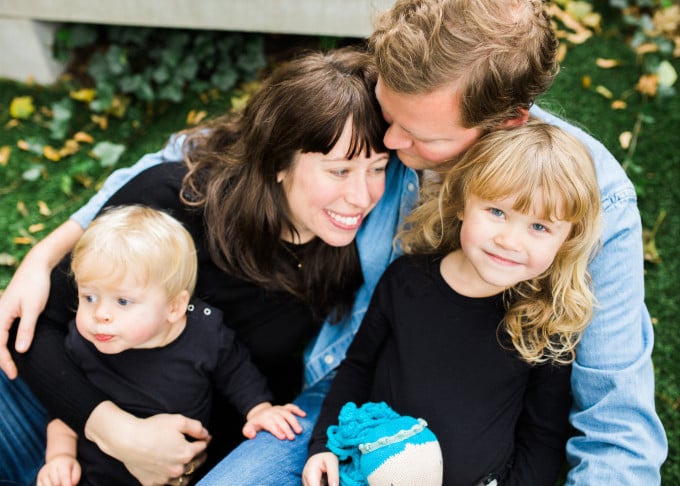 Thank you so much, Shannon!

(Photos by Nicki Sebastian for Cup of Jo. Styling by Ana Fritsch. Interview by Caroline Donofrio.)