An Ode to Quick Vacations 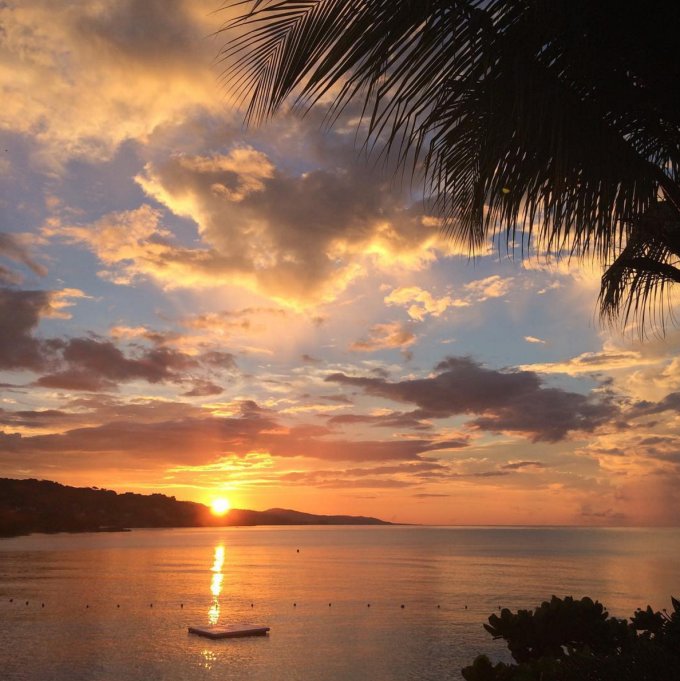 When Alex and I first started dating, he told me that he never liked short vacations. “A vacation is all about relaxing,” he would say. “I don’t want to fly somewhere only to turn right around. I’d rather take one long vacation.” But! Over the past eight years, I’ve taught him the genius that is the lightning-fast getaway… 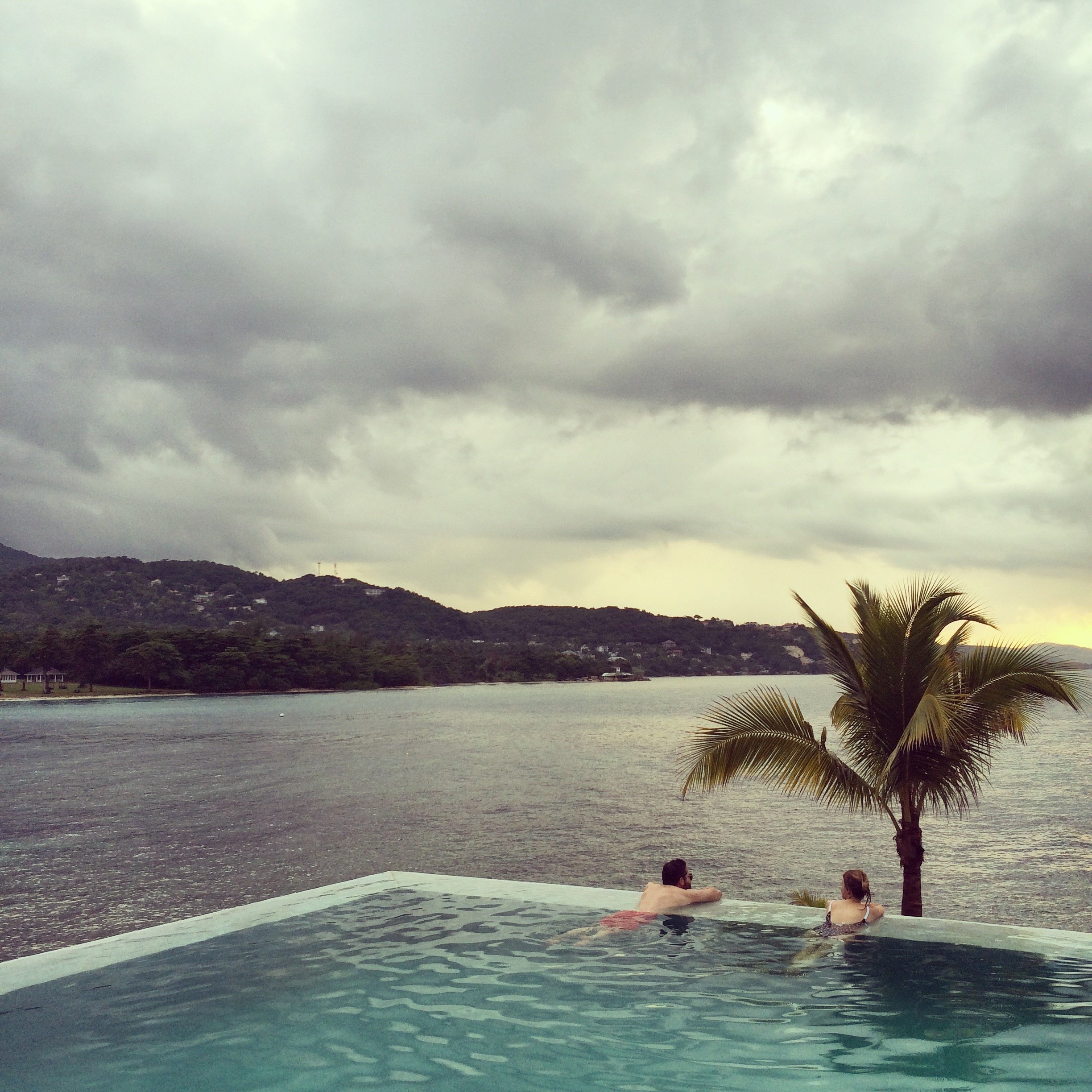 This past weekend, for his final birthday extravaganza, we took a weekend trip to Jamaica. We stayed in the beautiful Round Hill hotel, which I’d totally recommend. One great thing about a quick vacation is that you can splurge on a nicer hotel — since, obviously, it’s way cheaper to stay somewhere for two nights than seven. Plus, the rates are super reasonable this time of year, because it’s rainy season. Another great thing about the hotel is that it’s in Montego Bay, only 20 minutes from the airport (that’s key for such a short trip!). 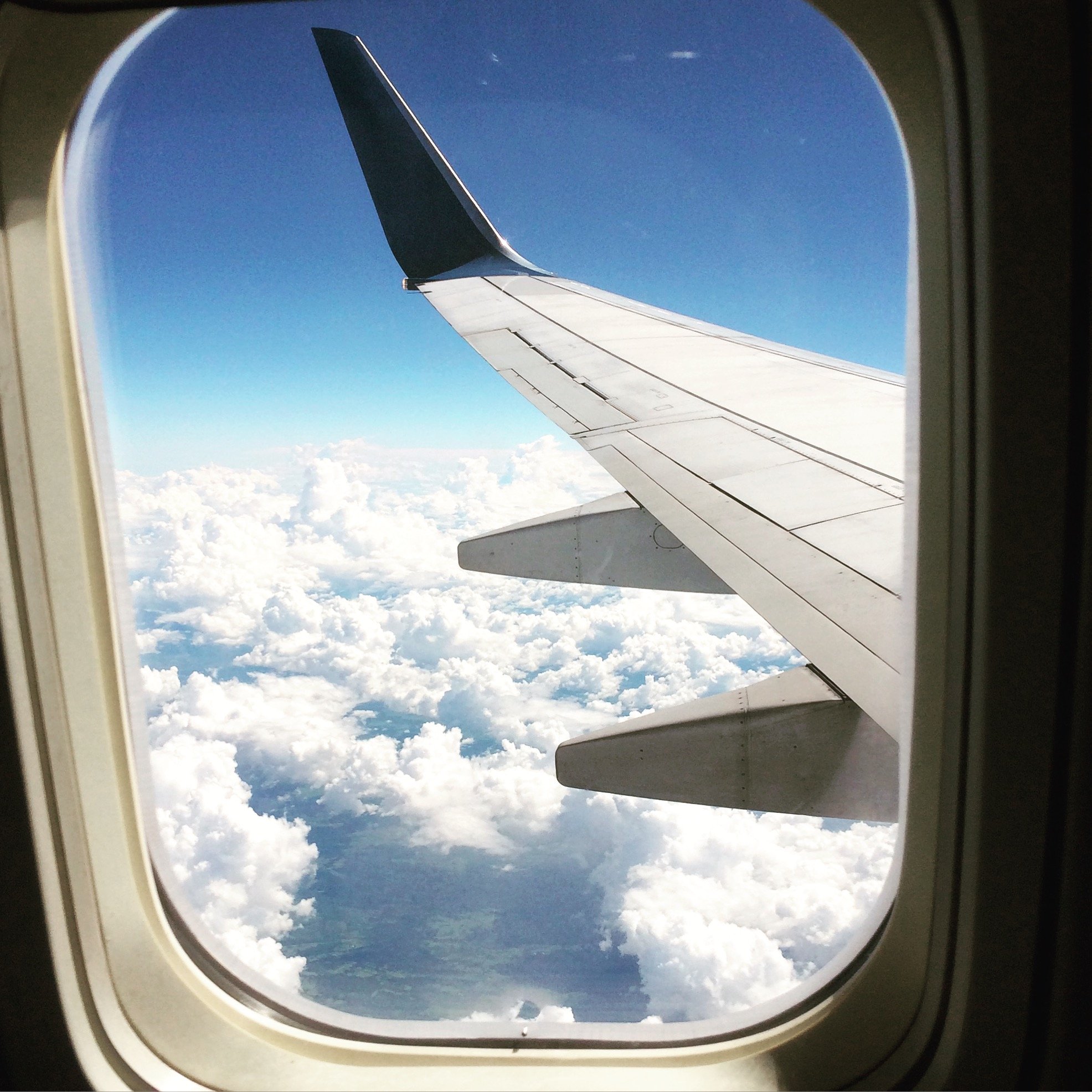 We flew out of New York very early in the morning (don’t be put off by the 6 a.m. flight, you can sleep on the plane!) and arrived at the hotel in time for lunch. So our first day felt like a full day — lunch, swimming, reading on the beach, snorkeling, drinks and dinner. 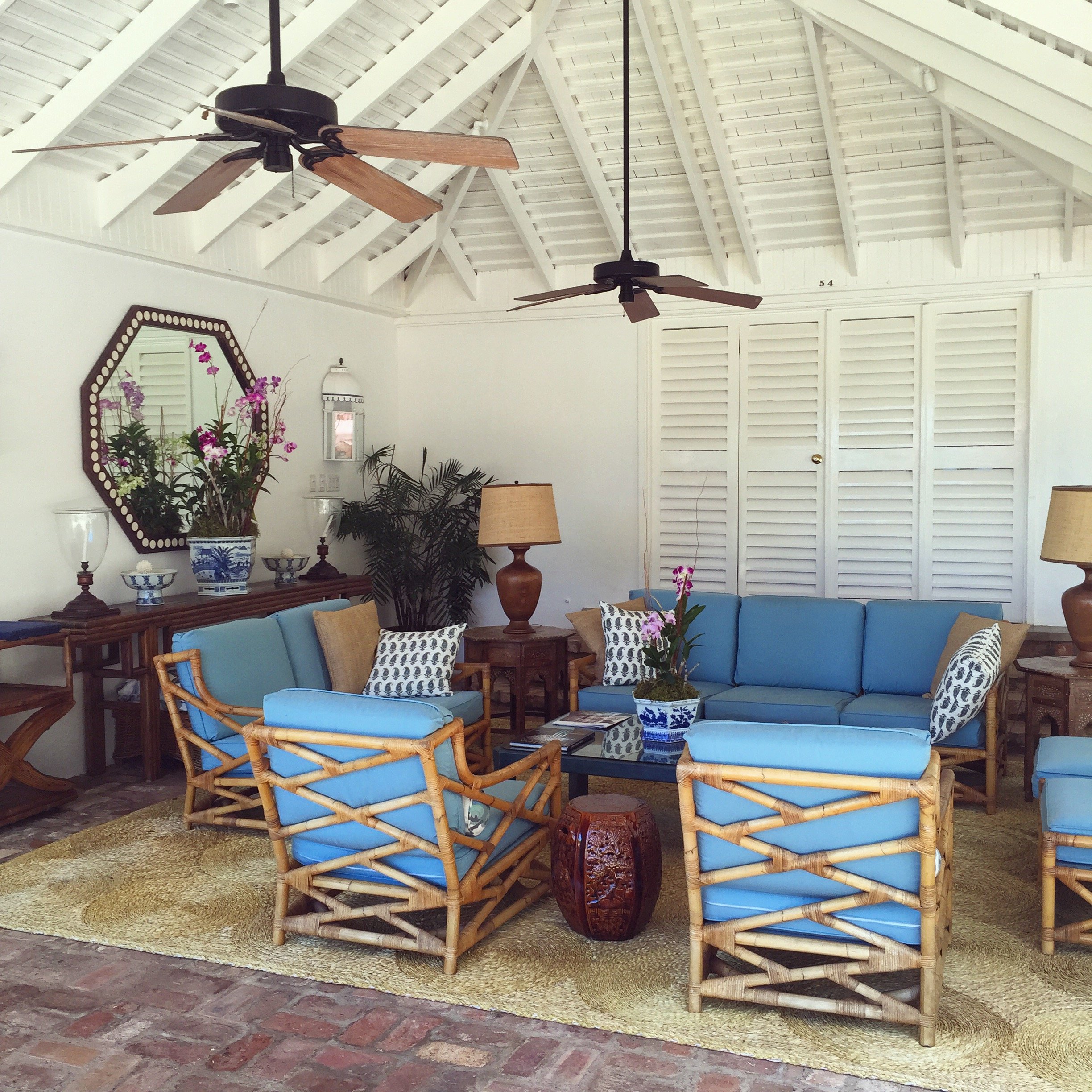 We were excited to get an upgrade — it was Alex’s birthday and it was low season — so we ended up with this awesome outdoor living room. Such a nice place to read and nap during the afternoon rains. 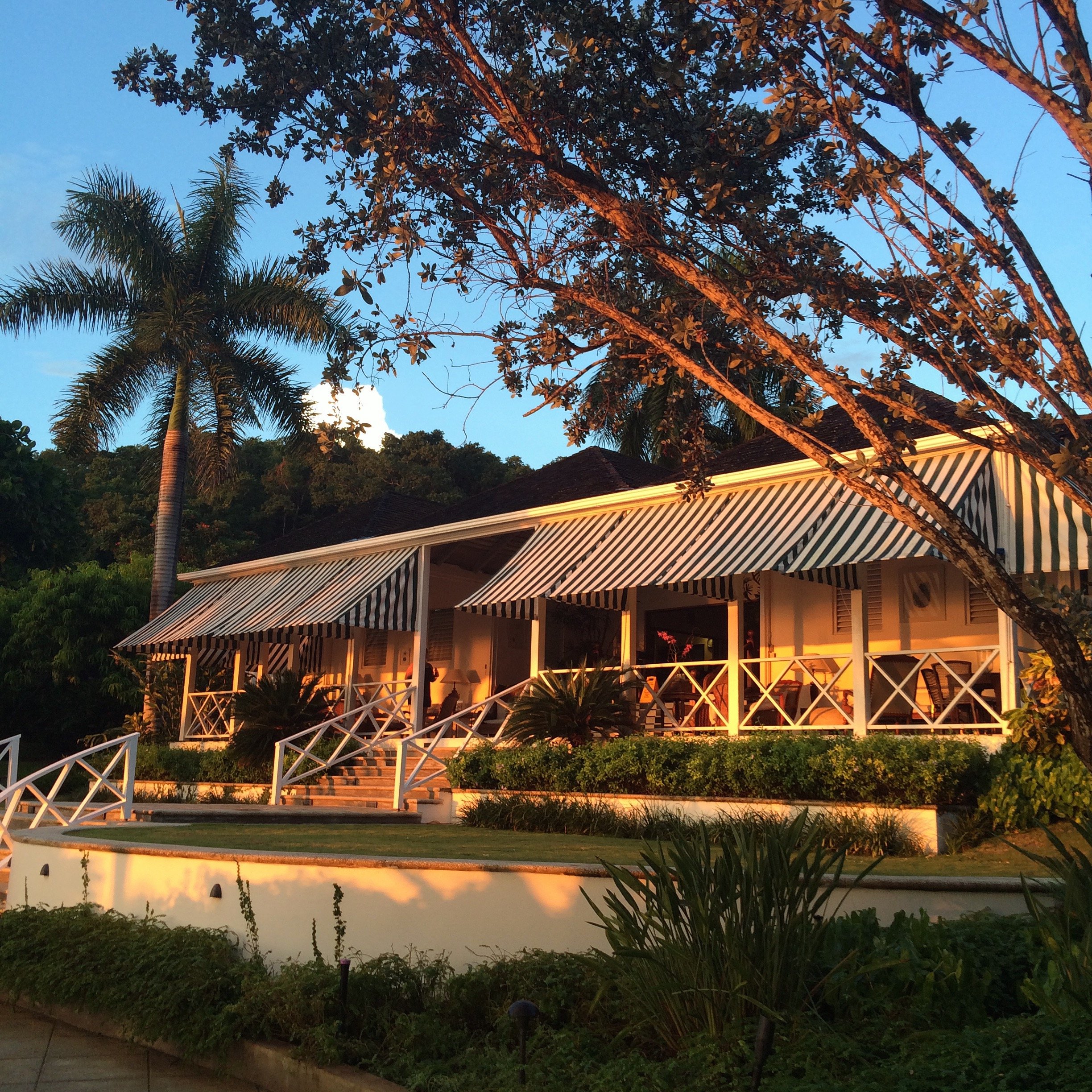 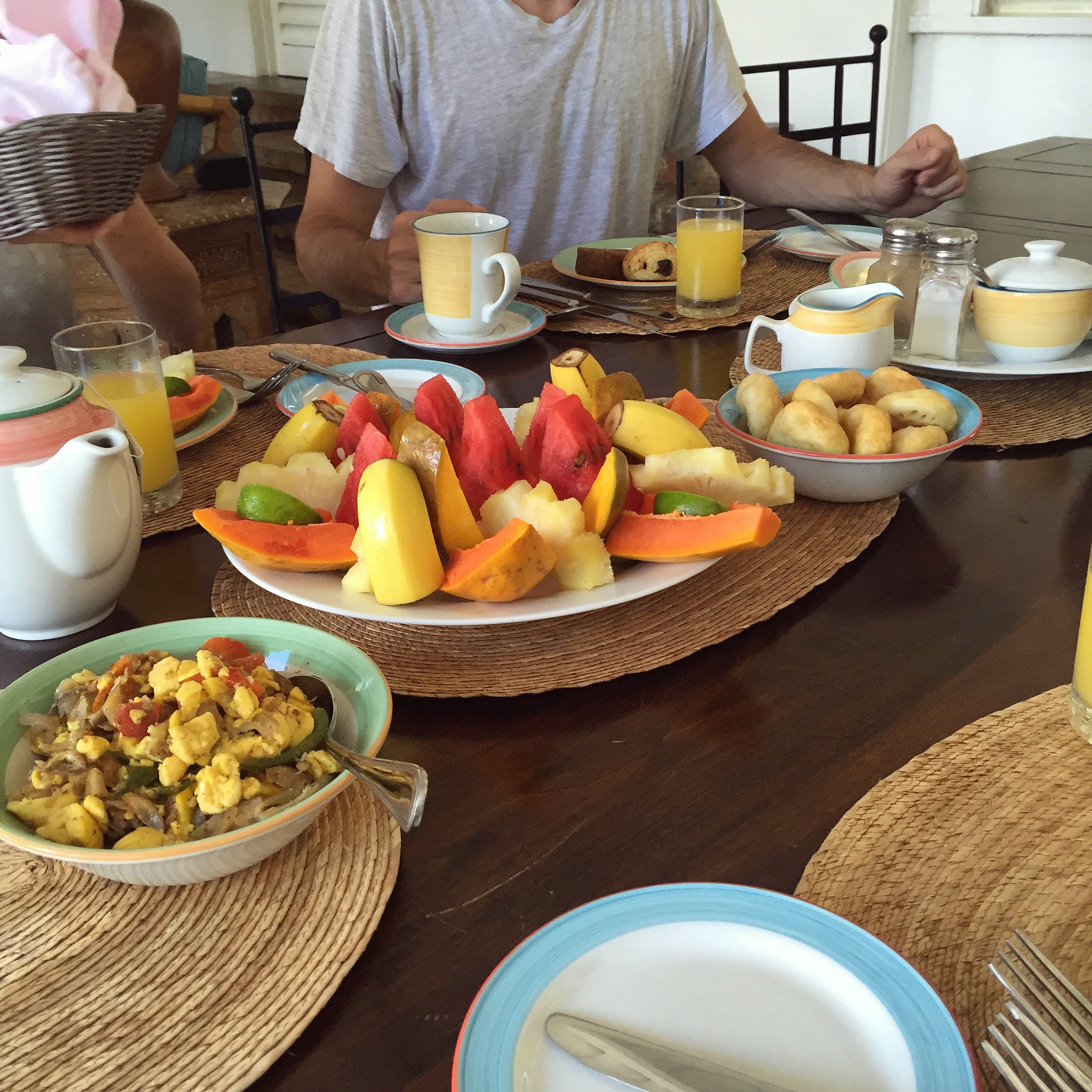 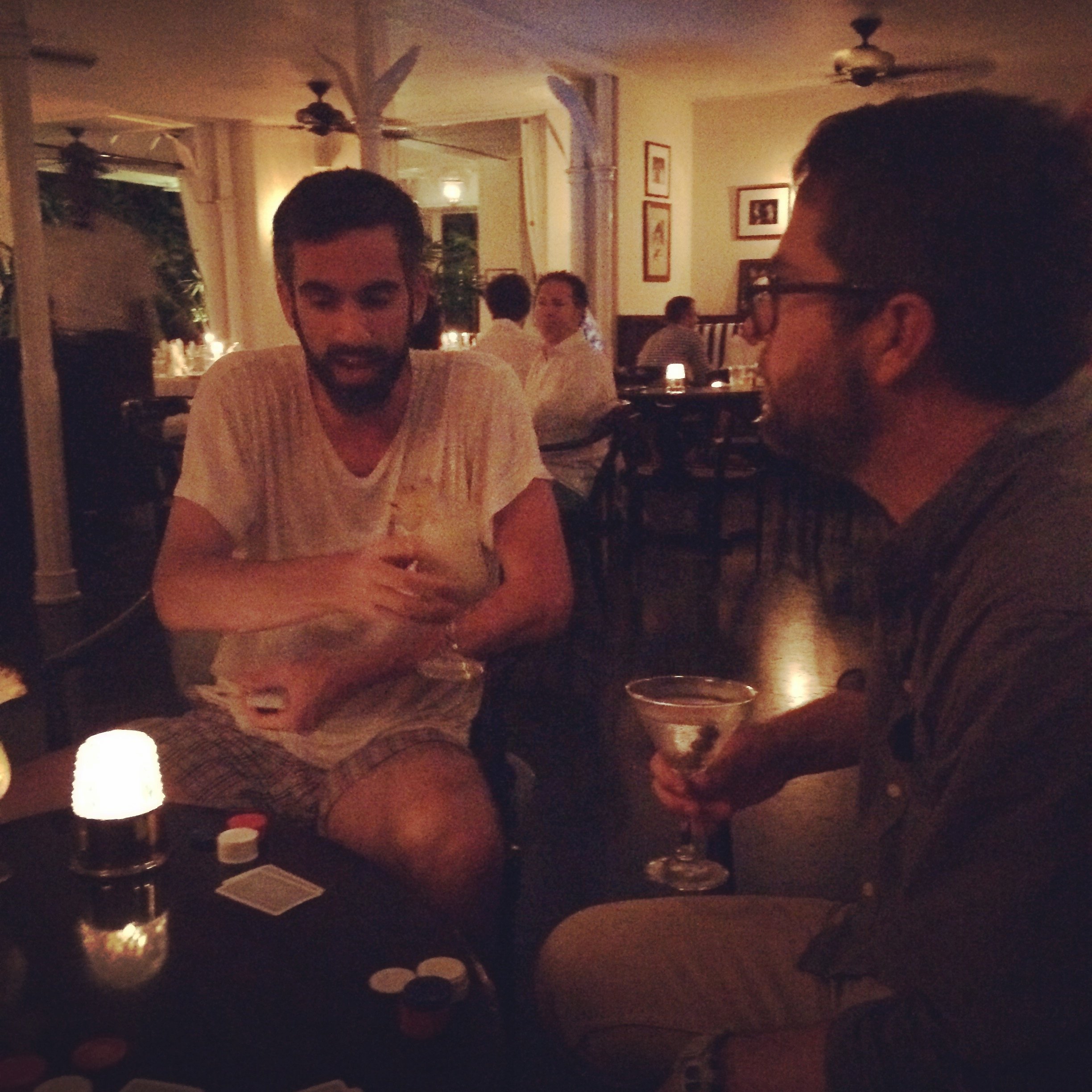 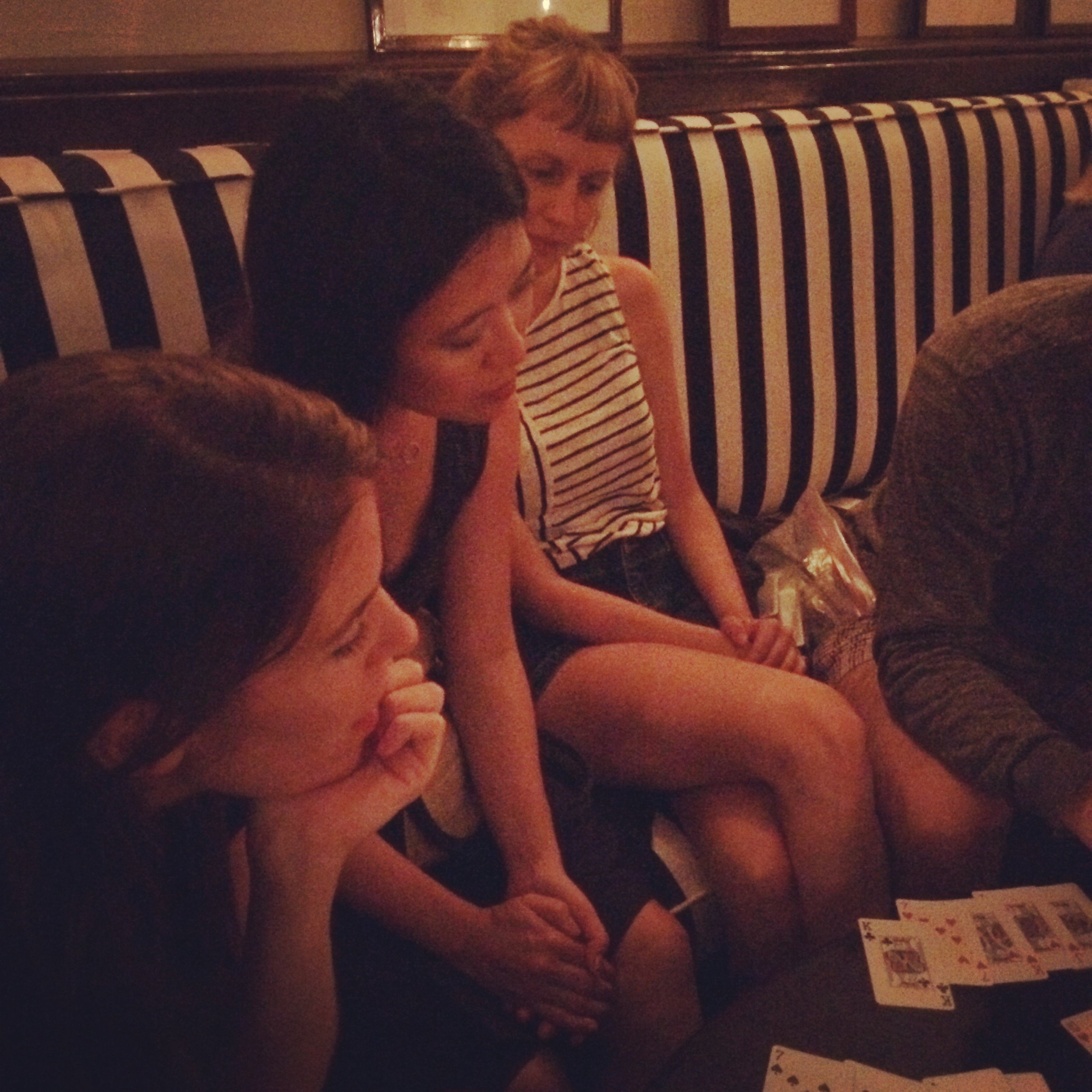 Two other couples came down with us, which was really fun. One evening before dinner, we played poker using cards and chips that my friend says he’s had since high school. (What a great thing to pack!) 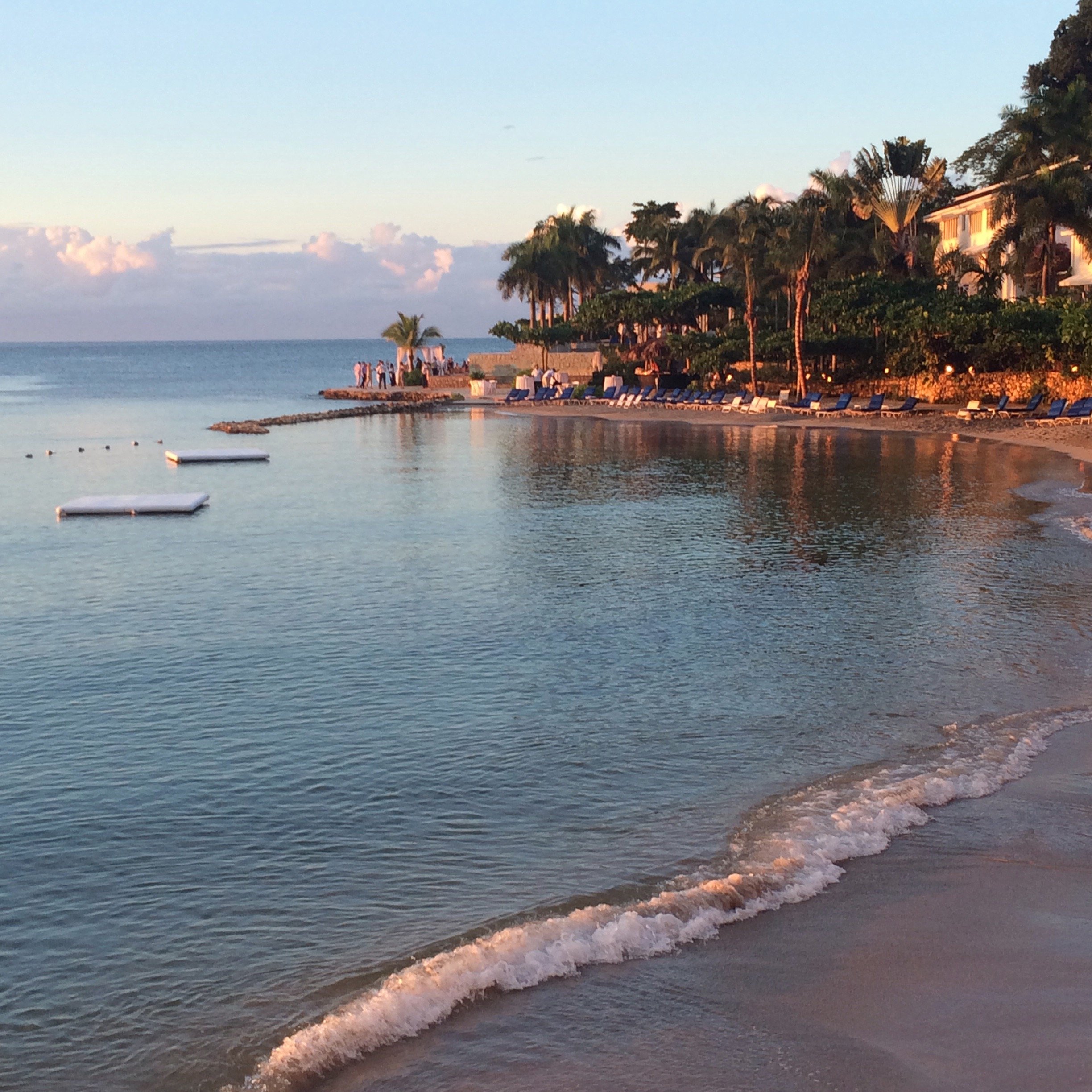 Another way to make a short vacation feel long is to switch things up. On other, slightly longer trips, we’ve stayed in two different hotels in the same city; this weekend, we ate in different spots for every meal — including Lobster Trapp, an AMAZING teeny seafood shack right on the water. We had freshly caught shrimp and fish with grilled vegetables. 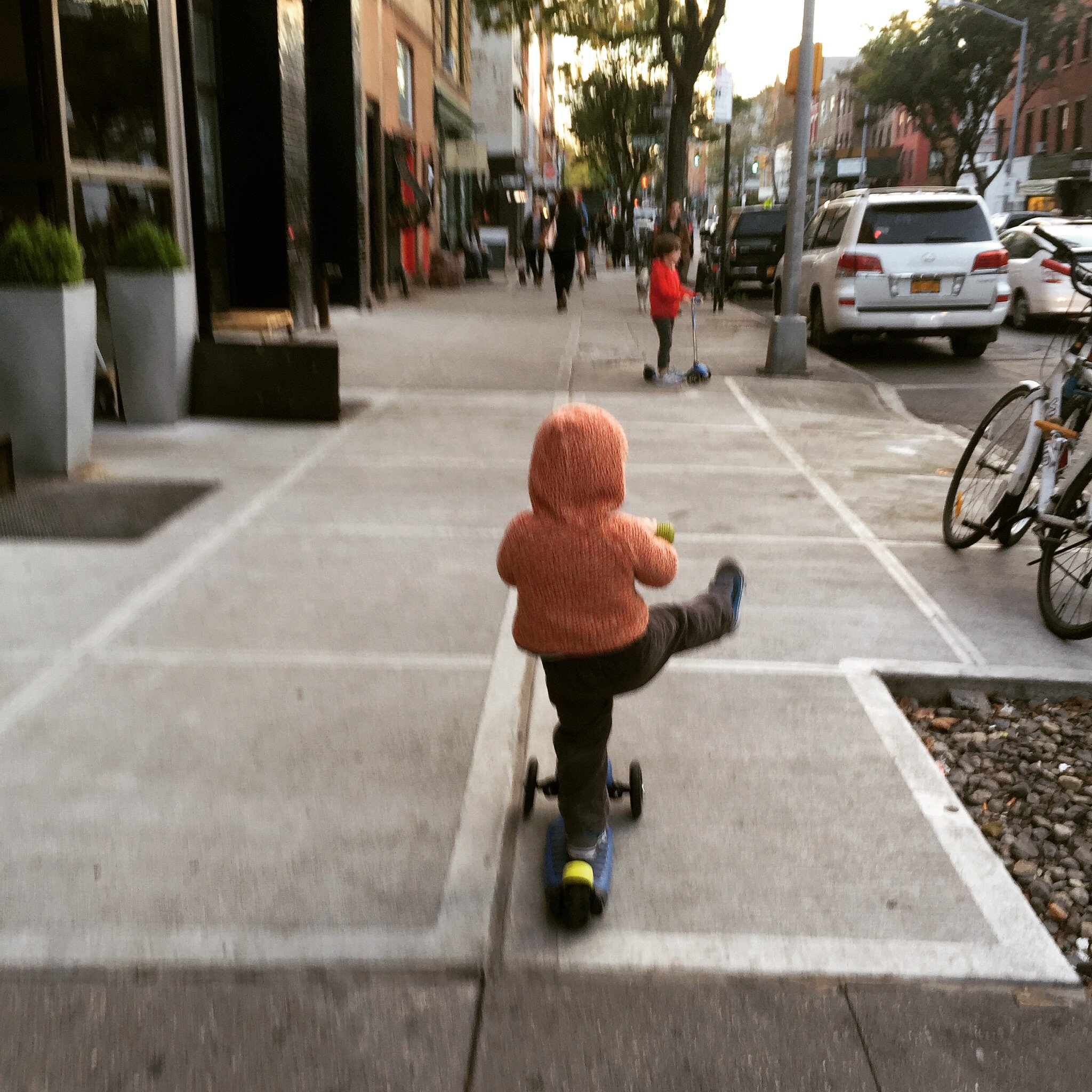 The weekend was wonderful, and we felt really lucky. But one final bonus of a quick trip, for me at least, is that I don’t miss the boys too much! When we got back, we gave them each one million kisses, and they showed us their new scooter tricks. :)

Thoughts? Are you into quick getaways? Do you have any trips coming up? Thank you so much for reading!

P.S. Our first trip away from the baby, and a 19-hour vacation we took last summer.

The Weirdest Best Part of Trips

nice write up…i found your blog off of a google search…to see if anything was out there talking about this very topic.

I am taking my wife to Jamaica for new year’s eve weekend, fri-mon, we both are very much looking forward to the new idea of a quick weekend fly away trip, as appose to a weeks long get away like we usually take. so i feel your enthusiasm, for sure.

I totally agree with you on the quick weekend getaways! It can be disappointing not taking a long vacation in a place you love, but sometimes we all just need a quick break from life. It’s fun to book a hotel last minute and get work off for a few days to recharge our batteries. My best friend and I did that recently and we decided that we needed to do it more often. Plus, it’s much cheaper to getaway for a weekend instead of a whole week or two.

how fun to take a trip with a friend! i would love to do that.

I LOVE weekend trips! I’m still young (read – low salary and not many PTO), so weekend getaways are my jam. The key is totally getting an early flight in and a later flight out to maximize time.

I wouldn’t go somewhere that far for only two nights … but I’d fly about an hour to a neighboring province or something like that.

I have always taken small getaways and I am beginning to see that longer ones would actually help me relax, maybe I can try a bit of both next year :)

lovely place! wish i could just pack my bags and go with the hubby and kids! unfortunately, time and money will not allow it for some time. love ur blog, btw, im so glad i stumbled upon it! (thank u, cup of jo!)

I live for short, spontaneous vacations!

I don’t have any upcoming trips but I love short vacations! We live on the West Coast and we have traveled to San Diego, San Francisco, Seattle and Portland just for 2-3 days. Sometimes that is enough to recharge!

Love Jamaica! My last stay was for 5 nights. Two days at Jakes, Treasure Beach, and three at the Rock House, Negril. A lovely trip, yet Jakes was an absolute favorite…chill, with a hippie vibe. Irie mon.

Sometimes a long vacation is great, but sometimes a quick getaway is even better because it can break up the monotony of everyday life. It also helps by everything not being planned out, therefore making it spontaneous, which may just be what the Dr. Ordered! You get mad reviews on blog sites, and we are just starting out, please come by and check us out and give an honest opinion @ thecottondiaries.com. Thanks!

What kind of scooter is Anton riding? He looks like a pro! Funny (re:sad) that this is my question about a vacation post…. ;)

You’ve convinced me. And my marriage thanks you.

what a cool idea! i may have to consider it!

My husband and I used to live in NYC and that’s been our “weekend getaway” of choice since becoming parents 3 years ago. My parents come to our house and stay with the girls for 2 or 3 days, and we just enjoy ourselves in a city we already know and love! But we were just saying that this winter we’d love to go somewhere warm for 3-ish nights. Anything more than that, and I start to get restless on a vacation anyway! This was very inspiring and I’m going to send him this to read ;) thanks!

I’m a weekender. I love weekend getaways! I try to organize a couple of days away at least once every two months. That gives me something to look forward to that makes every month special. Of course I love long vacations, but I prefer having different small holidays during the year that just one long trip.
Besides, for a control freak like me, it keeps my anxiety levels low(because I don’t leave my home, my job and my things for a long time) but also is the perfect break from my routine.
Here’s to weekend getaways!
xx,
E.
http://www.theslowpace.com

I love micro-vacations. I just went to a dude ranch in AZ for two days. Beautiful! Then zipped back to the reality of life.

Totally non-vacay related: How much do you love the scooters for the kids, living in the city? We’re DYING of moving 20 miles north into D.C. proper, but we have young kids who are used to a yard and a quiet-ish street on which they can ride their little bikes basically whenever they want. When strolling through the city last weekend (when the kids were with their dad), my girlfriend and I saw a couple local families with young kids on scooters and I thought how genius it was, and what a great compromise.

i love quick holidays! I actually prefer them to long breaks I think. These photos are just beautiful and Jamaica has always been on my wish list!

Ooooh, if Jamaica would be a short trip for me !! Thus, it is a journey halfway across the world ……

You should consider Bermuda for your next quick getaway! Less than 2hr flight from NYC and you will feel a world away!

I’ve always had the same mindset as Alex but I think you have convinced me to be brave and try a quick getaway. We have the same aged boys as you guys and I think it’s time we left him for a (quick) getaway. Also, looooove Jamaica! We got married there 7 years ago next month!

Quick is the way to go! My mom has worked for an airline for the past 20 years and I did the past two summers, and holy cow does it give you some incredible opportunities. A one-day trip hopping over to another province isn’t even a second thought some days. It really made us make the most of her (or my) flight benefits! Very cool that you two did the same. :)