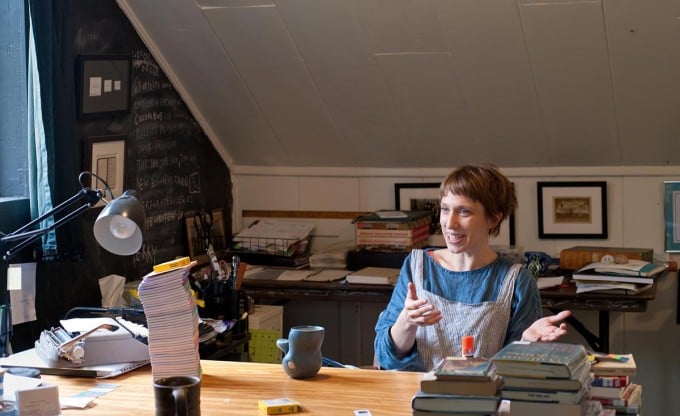 When Lenka Clayton, a British conceptual artist based in Pittsburgh, had her first child, she found it changed her approach to work. “It still seems to be a commonly held belief that being an engaged mother and serious artist are mutually exclusive endeavors,” she wrote. “I don’t believe or want to perpetrate this.”

So Lenka created a Residency in Motherhood, where she would create art while staying home with her one-year-old son: “For the 227 days of the residency, the fragmented mental focus, exhaustion, nap-length studio time and countless distractions of parenthood as well as the absurd poetry of time spent with a young child will become the artist’s working materials and situation, rather than obstacles to be escaped from.” 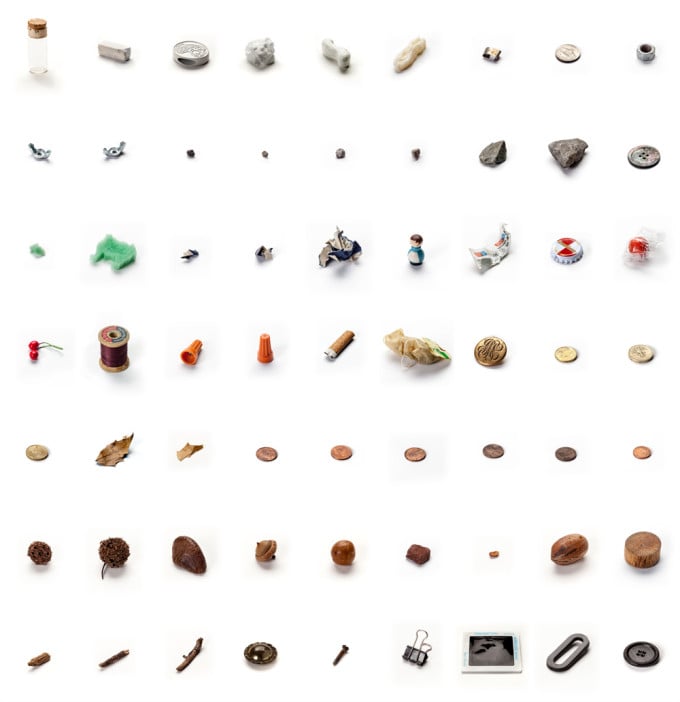 63 Objects Taken From My Son’s Mouth. “Sixty-three objects that I had to take out of my son’s mouth on safety grounds, between the ages of 8 and 15 months. The collection indirectly documents those months of our lives in small objects.” 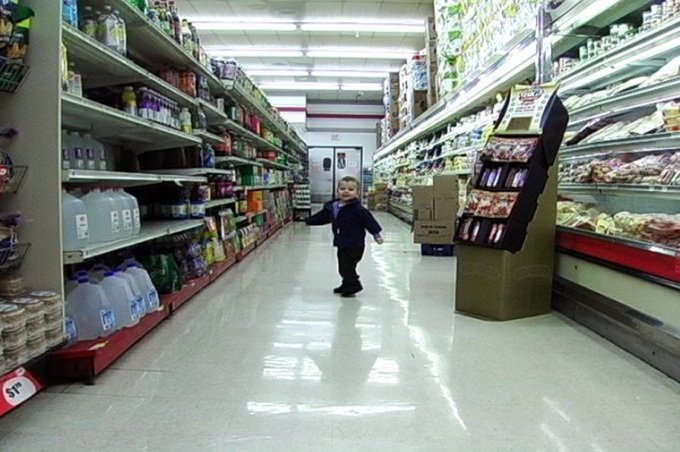 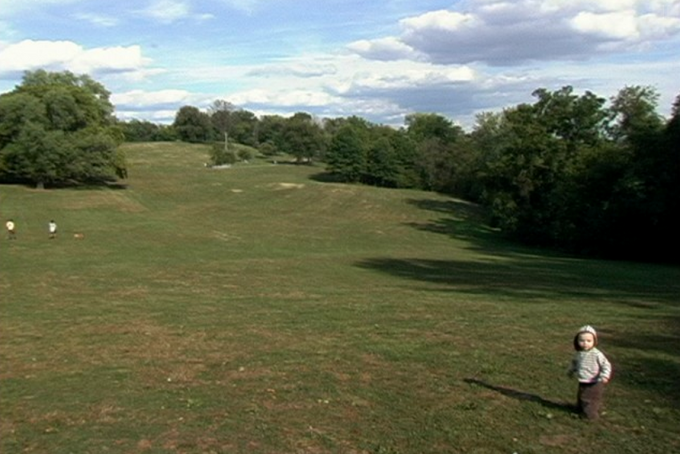 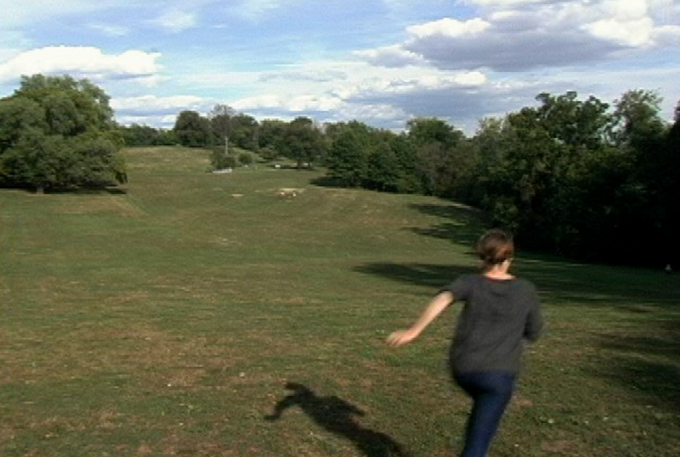 The Distance I Can Be From My Son. “A series of videos that attempt to objectively measure the farthest distance I am able to be from my son in a variety of environments. Please visit the following links to view full video episodes: Park, Back Alley, Supermarket, Fog.”

Maternity Leave. “For three months the sound of the distant domestic world of my home and new eight week old baby was transmitted via live audio feed to the Carnegie Museum of Art. The microphone at home was placed directly above the baby’s cot, capturing every murmur, cry and nursery rhyme. In the museum the sound was broadcast through a white plastic baby monitor, standing on a pedestal in the middle of an empty gallery space, audible to all visitors during the opening hours of the museum.”

Wonderful, right? “I start every project with a structure, with some set of invisible rules,” she says. I went down a rabbit hole on her site this weekend and adored all I saw. What a creative, playful mind she has.

(Thank you so much, Stella. Top photo by Bryan Conley for the Carnegie Museum of Art.)

Tags: art
27 COMMENTS
WRITE A COMMENT
Motherhood
most popular
01
How Did You Know You Were Ready to Have a Baby?
02
21 Completely Subjective Rules for Raising Teenage Boys
03
Best of: Parenting Around the World
04
Trying Out Slow Parenting
05
Three Transgender Kids Share Their Stories
Subscribe
Login
27 Comments
Inline Feedbacks
View all comments
janine

I just love this, and I love her rationale behind the art.

My husband is an artist, and next year I get long service leave – 3 months paid leave (not that exciting I work part time in the arts – in American dollars maybe I can buy 3 sandwiches each a day). My husband has applied to every residency program in the states he can find – they all respond that having children around makes the artistic endeavour impossible…. Italy on the other hand seems to well understand that people older than 20 make art, and that artists respond to life, and that having children are a part of this – they observe it and live it….. imagine telling Matisse, or Picasso that they were not really artists because they had kids running around. Of coarse Australia is even worse, it hardly even offers residency programs….. reading about how artists maintain their work post kids is really cool.

I saw these works at the Crystal Bridges Museum in Bentonville, AR. They really brought a smile to my face. I love how she captured in a creative way something so many can relate to.

Hi Joanna! This is so interesting. One thing I like about your blog so much is that you showcase so many ways to be a mother / parent. It does not mean that your life is over or you’ll never do anything for yourself again. Life is just different. I was so inspired after seeing how other artist mothers I know were still finding time to paint, and recently started a weekly series where I interview artist moms to ask how they carve out time for art. It’s amazing to see how many become more efficient with their work, better at making decisions, and more inspired to create after having children.

What an artist! I’m so glad you shared this!

And more Pittsburgh this week! Whooohooo! (Clearly I’m from the ‘Burgh!)

Oh gosh! I’m a toddler teacher, and I take so many things from the kids’ mouths (all of which go into our “Yuck” bucket to be sanitized). I swear some of them use their mouths like their hands … Just to feel things out! This is a cool project.

Coming from a child development professional’s standpoint, I absolutely love the “The Distance I can be from my Son” videos. Seeing him turn to check in with mom- “is this okay? is this safe? Mom isn’t lunging at me, so I must be okay” is so amazing! I think it would be super interesting to check out how this type of piece/experiment impacted her son’s play habits (maybe I should have warned you I’m a huge nerd about this… :)). I think they also spark an interesting conversation about helicopter parenting. How many of us watched as the child disappeared down into the fog and were leaning into our screens, wishing she might have gone a second earlier? In the grocery store, did she check what was at the end of the aisle before letting him roam? Did the person entering the aisle change the time in which she reacted? Amazing stuff. Children and moms- they are just the best! Thanks for sharing Joanna!!

how fascinating to hear your professional perspective! toby’s teachers will sometimes tell me things about how he plays, how he responds to new activities, etc., and it’s amazing to hear their insights; it’s almost like speaking another language.

So funny and smart. I can’t imagine having the presence of mind during my maternity leave to think ‘oh right, this would be a great art installation’. Her art feels simple and yet a profound emotional insight at the same time, if that makes sense…. Thank you for sharing Joanna!

I love this! So unique, but definitely something I’m sure most (if not all) mothers can relate to.

YES! Lenka is one of my favorites because of “the Distance I Can Be From My Son” and the display of items that Otto had hit her with which I can’t seem to find on her site. What a cool mother and artist.

also her own blog is really compelling; i just love the way she thinks.
http://residencyinmotherhood.com/studio-diary/

This is so interesting in so many ways! Very creative. I feel like I always have a connection with your blog. My last post is about how hard it is to be a mom and why I think nobody tells us about it in advance! This is a perfect example of the significance and importance of our job as moms. Loved it!

I hate how everything turns into baby stuff when people have babies (and I have babies!) but this is FANTASTIC. Just wonderful.

I love her work and all her ideas.
What a way to conceptualise the everyday life.

This is brilliant and the post is perfectly timed for me, as I found myself yesterday lamenting the fact that I have so little time (oh, how I took that for granted!) to devote to the creative projects I once did. Maybe the trick is to think of things a bit differently now, to work into this new life rather than against it or “despite” it, as she says. Thanks for the introduction, Joanna!

This makes me appreciate what mothers have to endure to keep their toddlers safe from tiny objects! xo

I love the creativity in these pieces, and the larger conversation she is trying to start! Bravo!

Thank you for sharing this, I LOVE this. Especially the Maternity Leave exhibit at the museum. So sweet, so real, this is art that touches my heart.

I love how the security guard is seems to be like, ahhh, there goes that baby again.

I love it! Great art, thank you so much for sharing….I needed this today!

Love from Germany and a peak at our brand new site:

I so wish I could see this. I’m writing my dissertation on maternal feminism and identity creation through images of mothering.

how fascinating. wish i could come over for coffee and talk more about your work.