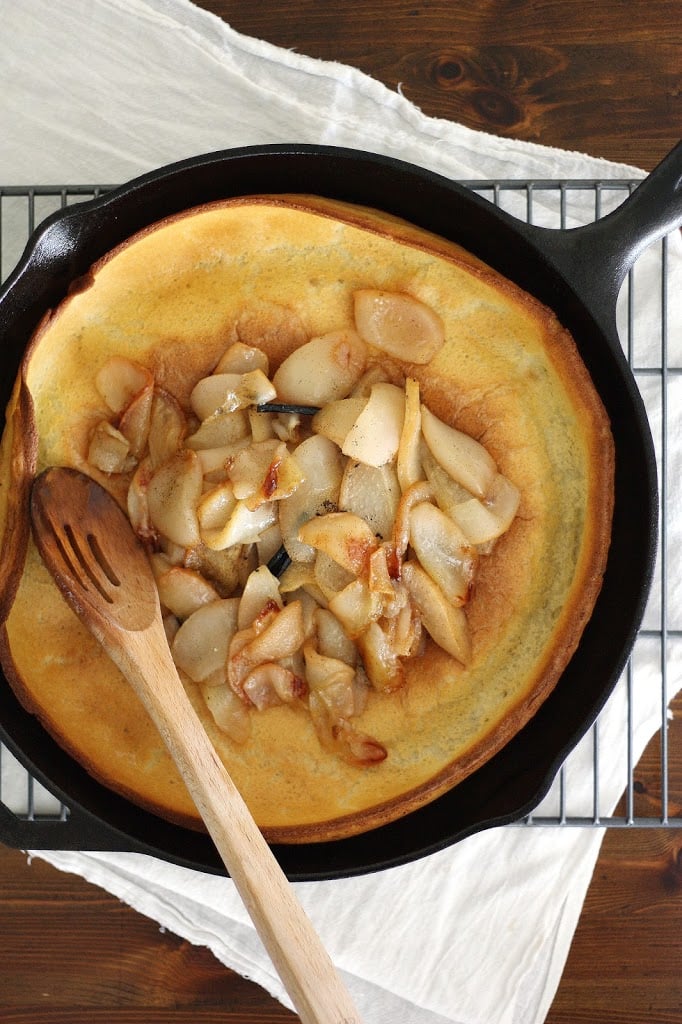 This mouthwatering recipe, by Stephanie of Girl Versus Dough, speaks for itself (and would be perfect for your next Saturday morning)… 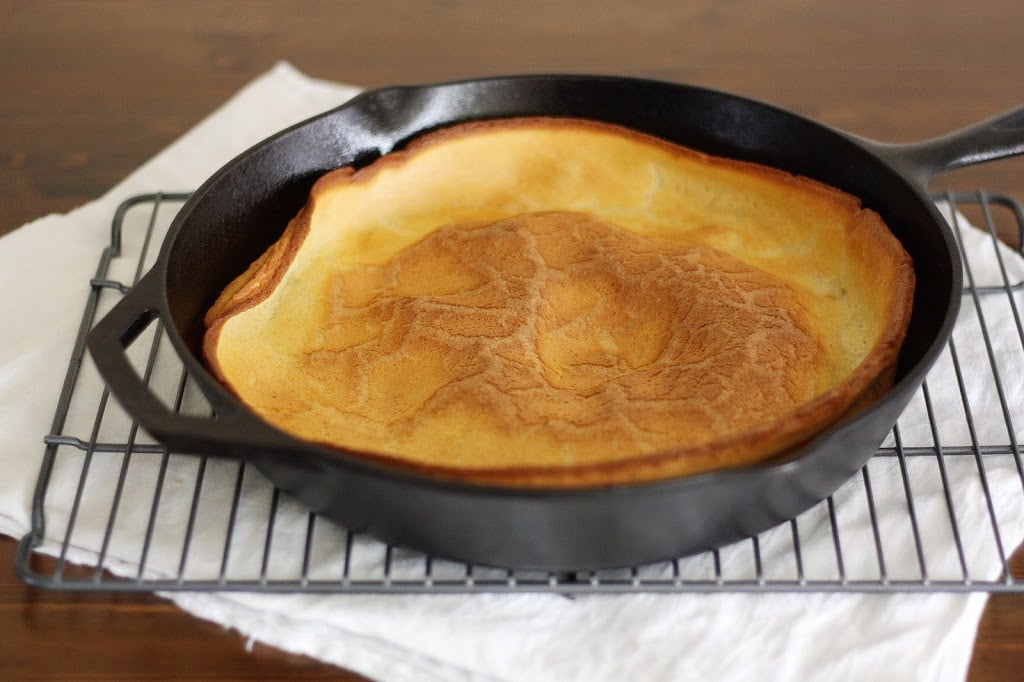 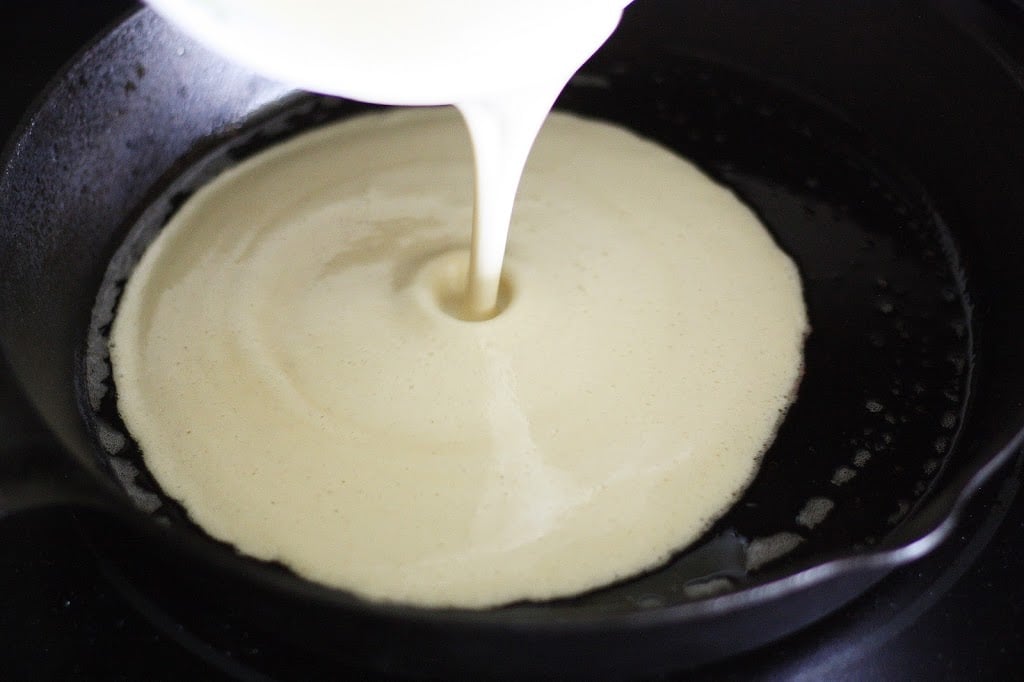 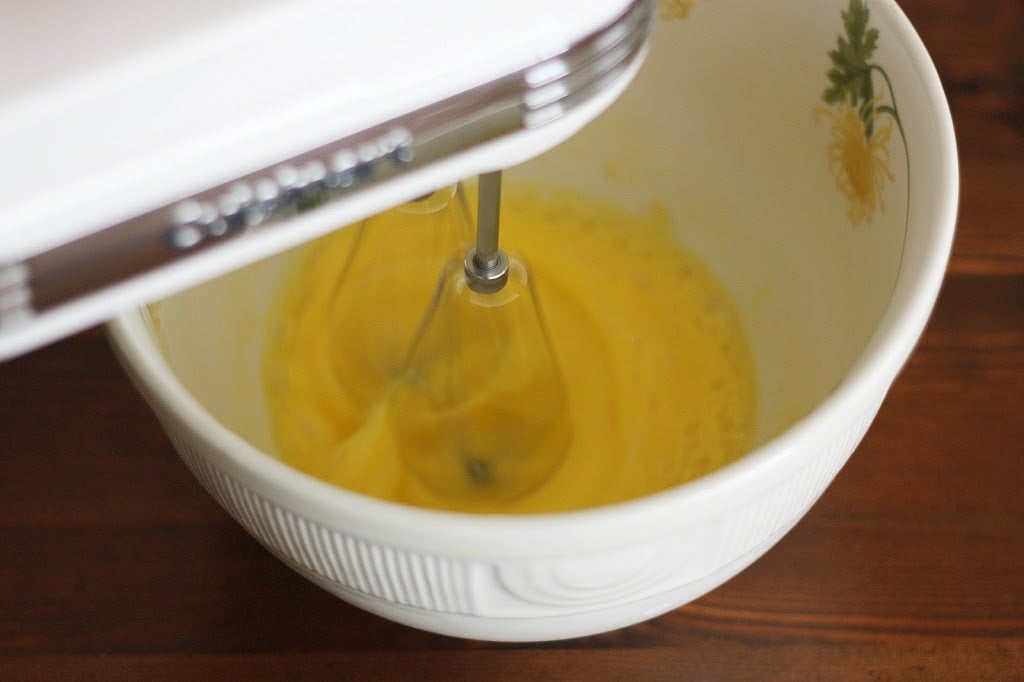 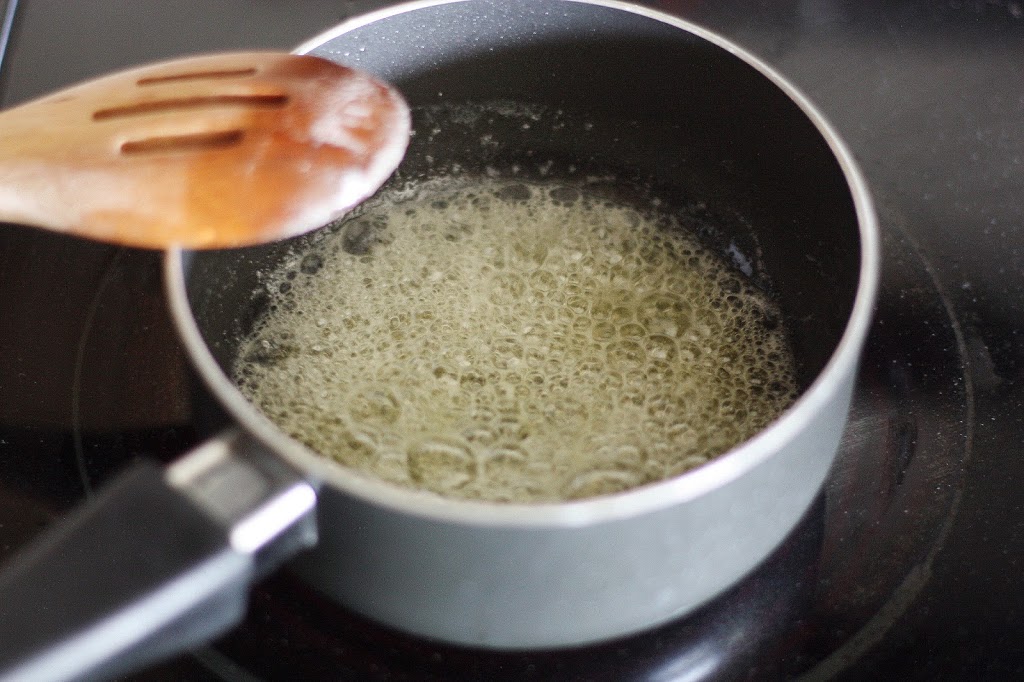 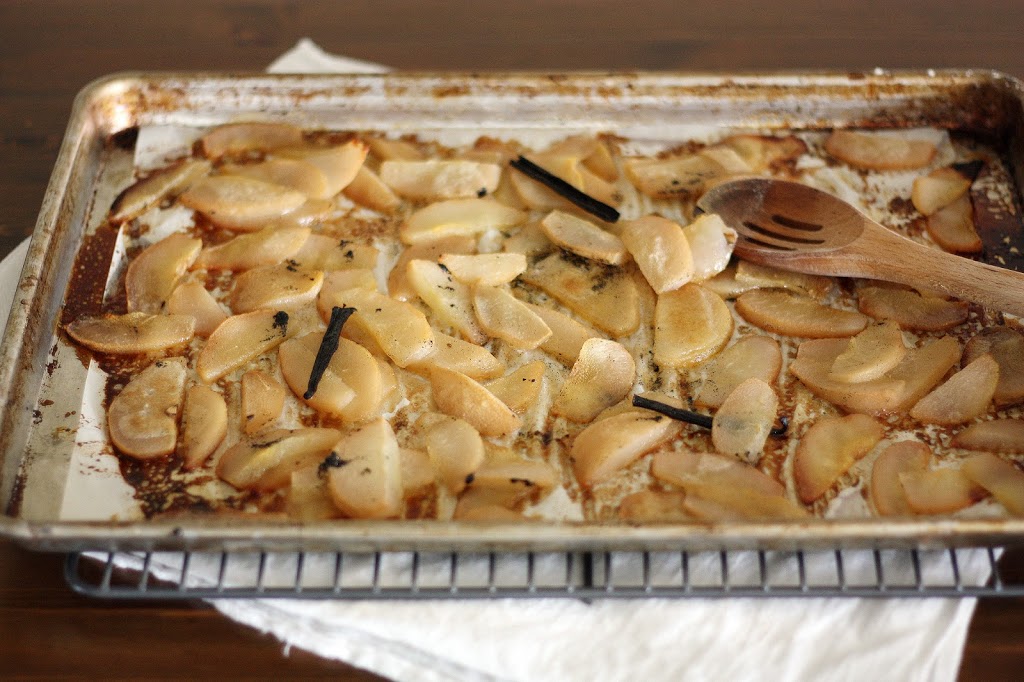 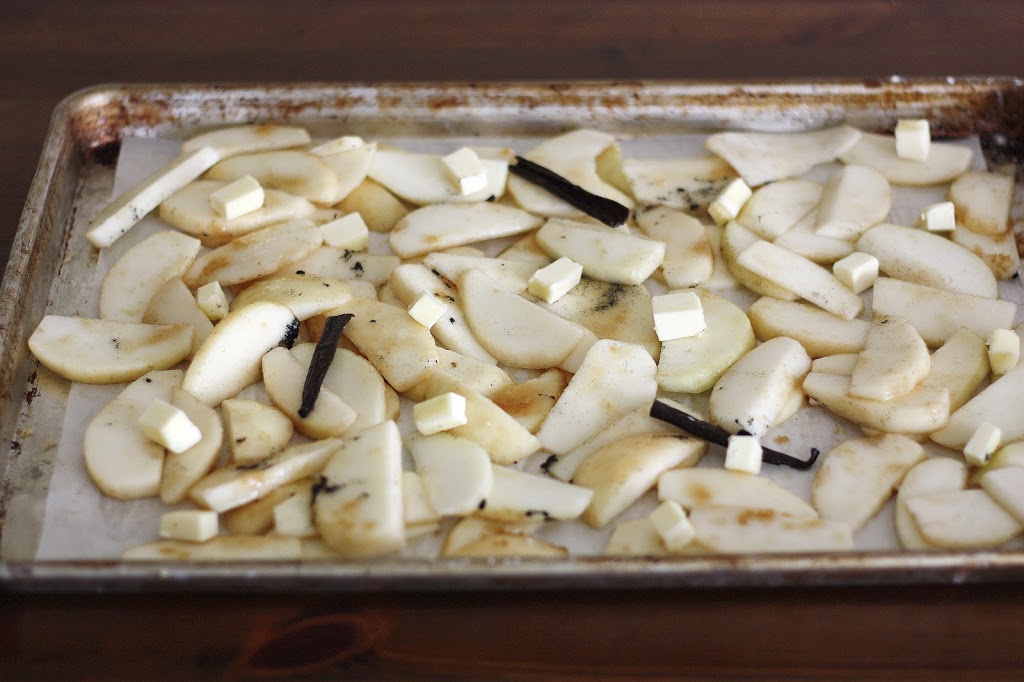 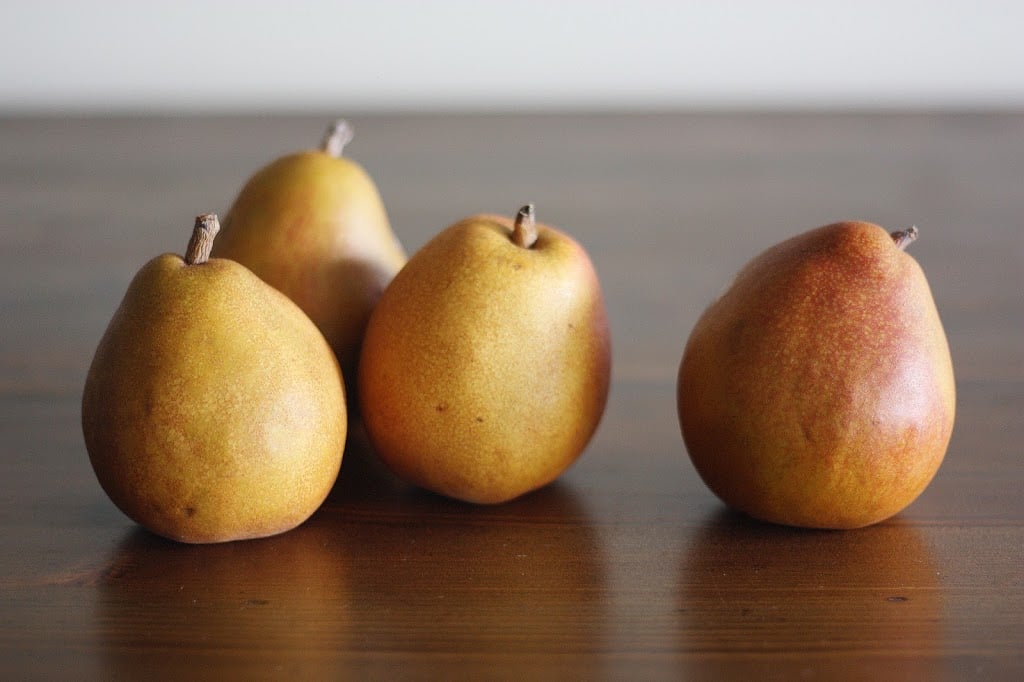 I remember the first time I encountered a Dutch baby. My little brother ordered it off the menu at one of our local breakfast joints, and when the thing arrived at the table, all puffy and golden and three times the size of anything anyone else ordered, I knew I had to have one. Thus began a war of the forks between my brother and me as I tried to grab just one measly bite of the enormous pancake. It was also the last time I tried one (I snuck in a bite when he wasn’t looking) for many, many years.

Fast forward those many, many years to one slow, lazy, glorious Saturday morning. I wanted pancakes. Some blessed lightbulb went off in my head that day, reminding of the giant Dutch baby pancake, and I set to work in my kitchen creating one of my own. It was a simple version, with a squeeze of lemon juice and a dash of sugar on top, but it was perfection. Since then, I’ve made many variations of Dutch baby pancakes with many different toppings, and none come close to the flavors of this browned butter version topped with roasted vanilla pears. Let’s just say that whenever I make this, if anyone tries to get between me and my pancake, I get my fork ready for battle. I suggest you do the same.

Heat oven to 425F. Place a 10-inch cast-iron skillet on the middle rack of the oven.

Line a baking sheet with parchment paper and spread sliced pears on top. Cut vanilla bean in half and scrape out seeds; sprinkle over pears. Cut the leftover bean in thirds and tuck among pears. Sprinkle pears with brown sugar, lemon juice, flour and salt; toss lightly to combine. Sprinkle top with cubes of butter.

Bake pears on rack just beneath cast-iron skillet until soft and golden, about 30 minutes.

Meanwhile, make the Dutch baby. Melt butter in a small saucepan over medium heat, stirring constantly, until brown bits appear and butter turns a caramel color. Remove from heat and set aside.

Remove skillet from oven. Pour in remaining butter; swirl to coat. Pour batter into skillet. Immediately return skillet to middle rack of oven and bake until pancake is puffy and golden, about 20 minutes (you can do this simultaneously with the pears). Top warm pancake with roasted pears and serve. 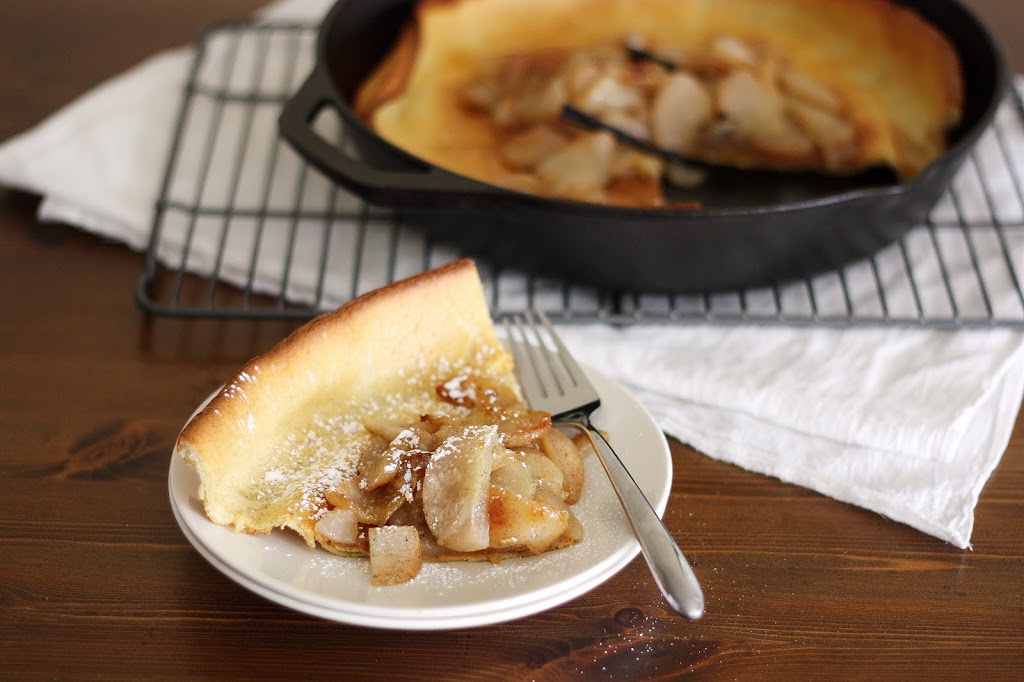 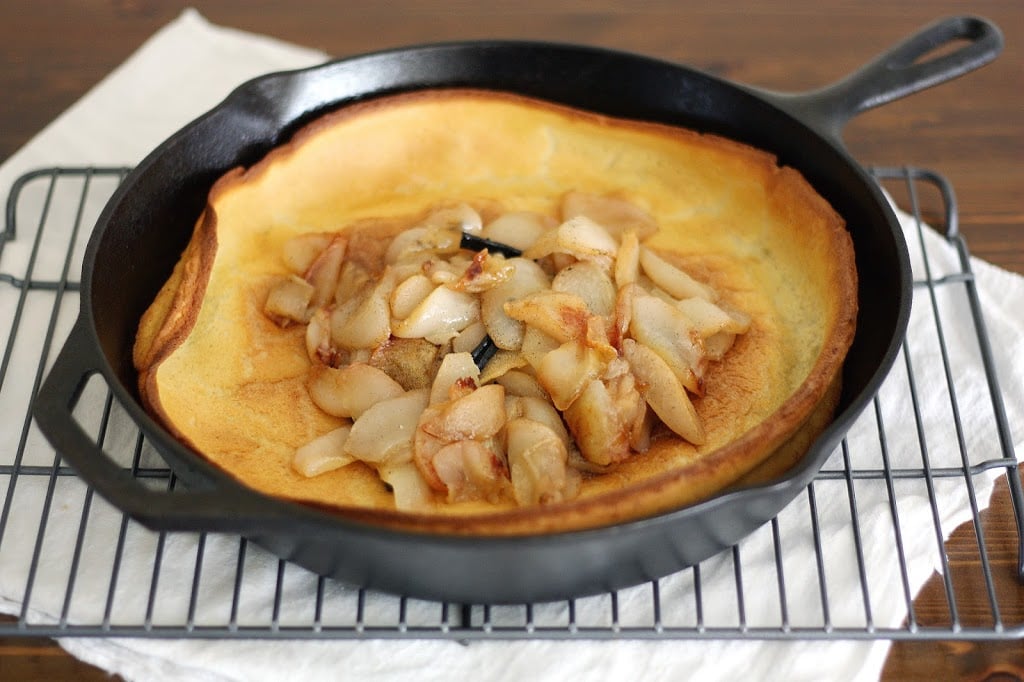 Thank you so much, Stephanie!

(Photos and recipe by Stephanie Wise of Girl Versus Dough. Thanks to Shoko for helping with this series.)

I was in the kitchen the whole time but could hear from the peanut gallery in the living room the smells coming from the oven were amazing.

Made them this morning with a few tweaks:

– I used whole spelt flour because I don’t cook with white.
– my daughter can’t have cow milk, so I subbed coconut milk.
– I wanted a more filling breakfast, so I double the Dutch Baby batter and cooked it in the same size skillet.

They were perfect, light, and fluffy! My daughters loved them, I did too, and they filled us up. The pears are delicious. Definitely worth the time!

For the Dutch Baby it asks for vanilla, I was just wondering what type, is it extract? Many thanks Cat

Delicious! Made these this morning for myself and my husband. The pancake comes out with a crisp bottom and fluffy. The roasted vanilla pears are decadent! A lovely Saturday morning treat. Thank you so much for sharing!

I’ve never had a dutch baby before, but these look absolutely delicious! Thanks for sharing the recipe.

Love the Dutch baby. I mean, who wouldn’t want a huge, puffy pancake?? But whenever I make them, they always, ALWAYS stick to the bottom of the pan. Is it because I don’t heat/melt the butter in the pan first?

Reply
Sam, Leave The Nest Up To Me

I knew them as German Pancakes when I was growing up but have seen them at a few restaurants as Dutch Babies. They are delicious, especially with blueberries!

oh wow! these look delicious. we’re big fans of breakfast for dinner over here. these would be delicious!

Love Dutch Baby pancakes and these look amazing with those roasted vanilla pears.

I’d love to try this recipe for the vanilla roasted pears as a topping (they look delicious!), but I think I’ll stick to the Dutch baby recipe in the Joy of Cooking, which always yields a tall (a few inches!), fluffy pancake. The pancake in these pictures looks awfully flat to me.

I’ve never had a dutch baby, but this makes me want to try one! Delicious.

Delicious looking! My roommate makes Dutch Baby Pancakes with strawberries from the farmer’s market many Saturday mornings! But pears would be great as we transition into fall!

I often have dutch babies for dinner when my husband is out of town and I’ve already spent most of the evening feeding/bathing/putting to sleep my three little ones. It is such a treat to sit down with one of these after they are in bed while indulging in some sort of girlie show like the Bachelorette!

Now I will have to try it with the vanilla pear topping. This looks so perfect!

I LOVE dutch pancakes and so few people know about them! Anytime we had a brunch or people over for breakfast, she would make a huge dutch pancake with strawberries in the middle. My absolute favorite brunch/breakfast item to this day.

These look so good, I’m going to try them this week!

If anyone would like to check out my new blog, I’d be so grateful:

Why do they call it Dutch? I live in The Netherlands and I’ve never seen such a pancake before…

Pretty sure it stems from Americans trying to say “Deutsch”, since it’s also called a German pancake :)

oh my, this sounds and looks amazing
i was off to make one immediately but with strawberries from my friends garden… but i have no eggs. another time.

thank you for sharing!

This looks wayyy too ambitious for my Saturday mornings but I would love for someone else to make it for me :)
http://lettuceandlibraries.weebly.com/

That looks amazing! Will have to try it for my next lazy weekend breakfast at home :-)